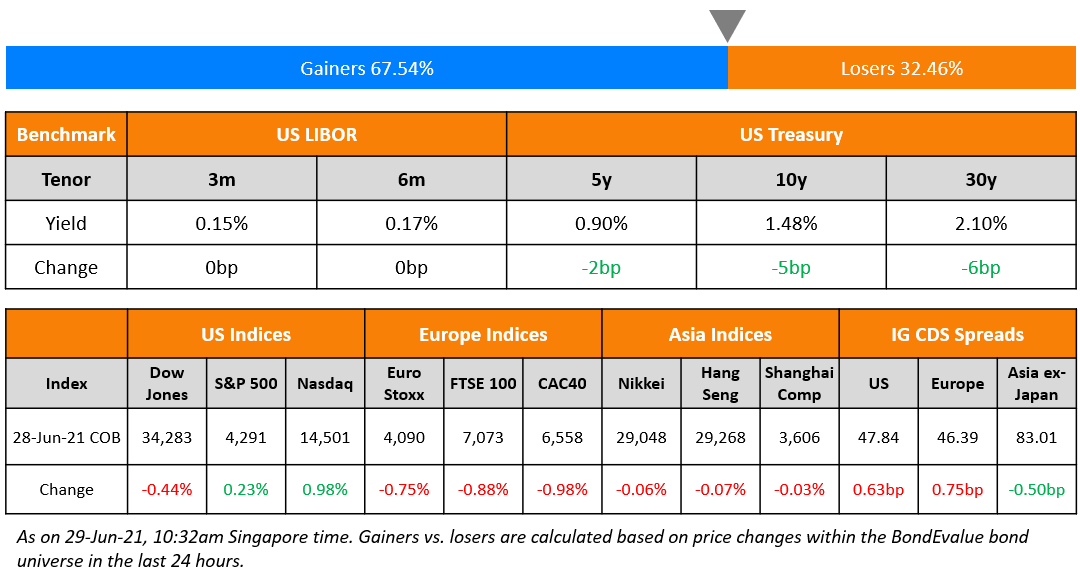 US markets continued their strong run boosted by tech stocks, which helped Nasdaq close higher by 1% to reach another record. S&P also set a record, gaining 0.2%. IT was up 1.1% while Energy and Financials lagged, down 3.3% and 0.8%. US 10Y Treasury yields eased by 5bp to 1.48%. All eyes are now set on Friday’s job report by the Labor Department where economists expect NFP to increase by 683k in June, topping the 559k reading for May. European bourses witnessed a fall after the increased number of Covid cases and the likelihood of EU banning British tourists pulled down travel stocks. CAC, FTSE and DAX were down 1%, 0.9% and 0.3%. US IG and HY CDS spreads widened 0.6bp and 2.9bp respectively. EU main and crossover CDS widened 0.8bp and 4.8bp respectively. Saudi TASI was down 0.1% while Abu Dhabi’s ADX was up 0.6%. Brazil’s Bovespa was up 0.1%. Asian markets opened in the red – Nikkei is down 0.9%, Singapore’s STI down 0.8%, Shanghai down 0.6% and HSI down 0.5%. Asia ex-Japan CDS spreads were 0.5bp tighter. Another busy day at the primary markets with 11 new dollar deals dominated by Chinese local government financing vehicles (LGFVs). 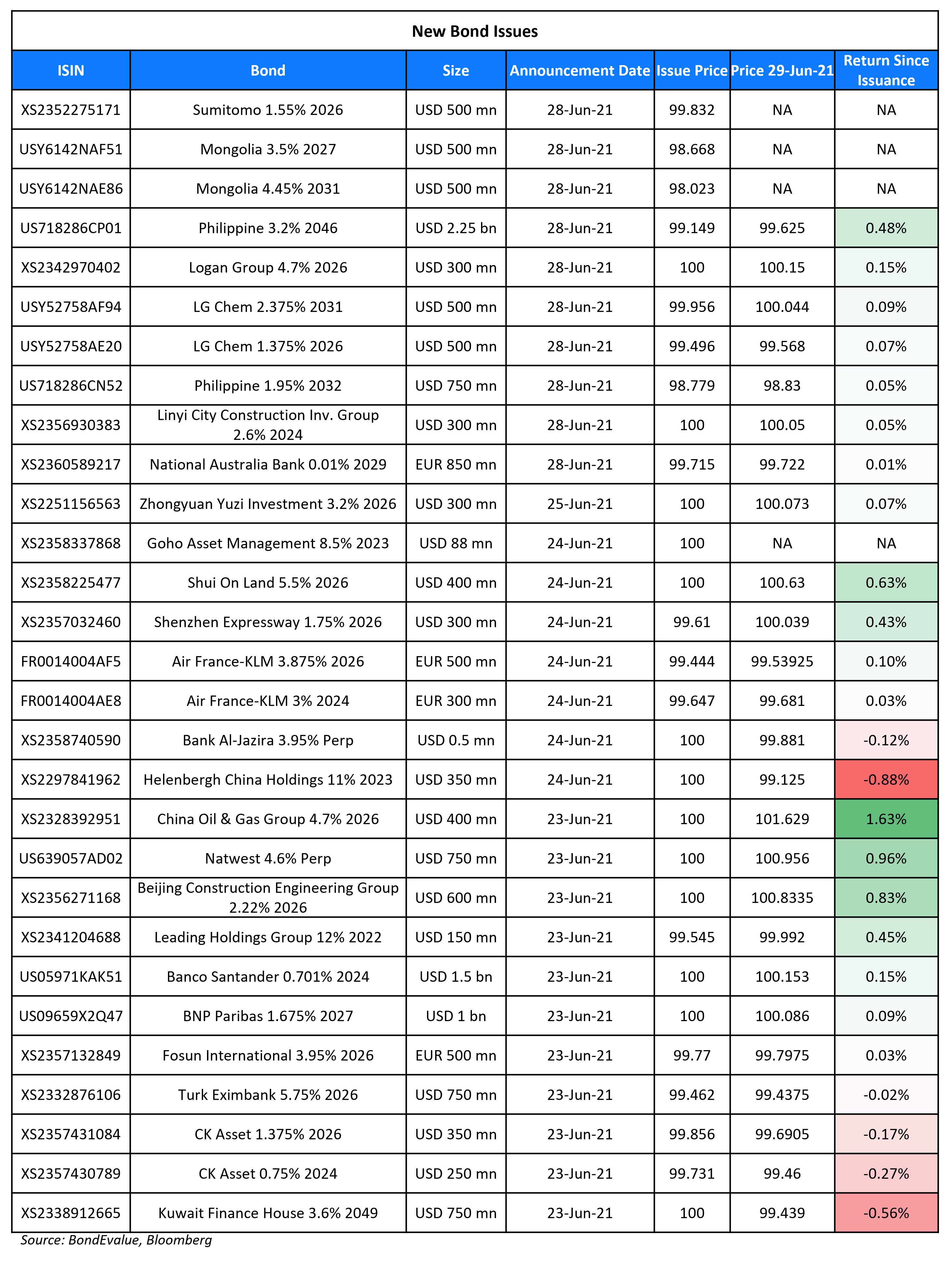 Logan Group raised $300mn via a 5Y non-call 3Y (5NC3) green bond at a yield of 4.7%, 35bp inside initial guidance of 5.05% area. The bonds have expected ratings of Ba3/BB and received orders over $1.65bn, 5.5x issue size. Asia took 86% of the bonds and EMEA 14%. Asset/fund managers/hedge funds were allocated 80%, private banks and corporates 12%, insurance and pension funds 6% and banks and financial institutions 2%. Proceeds will be used for debt refinancing and to finance or refinance eligible green projects. The bonds were priced 14bp over their 4.85% bonds due December 2026, callable in December 2024 that currently yield 4.56%.

Sumitomo raised $500mn via a 5Y bond at a yield of 1.585%, 25bp inside initial guidance of T+95bp area. The bonds have expected ratings of Baa1/BBB+. Proceeds will be used for general corporate purposes, including debt refinancing.

UniCredit raised €1bn ($1.2bn) via an 8Y non-call 7Y (8NC7) bond at a yield of 0.807%, 30bp inside initial guidance of T+120bp area. The bonds received orders over €2.7bn, 2.7x issue size. Net proceeds will be used specifically for financing and/or re-financing of specified green projects and activities in accordance with eligibility criteria as described in UniCredit’s Sustainability Bond Framework.

Proceeds will be used to repay existing debt including certain export pre-payment agreements and the optional redemption with make-whole premium of the outstanding 5.25% 2024s issued by Fibria Overseas Finance Ltd.

Linyi City Construction Investment Group raised $300mn via a 3Y bond at a yield of 2.6%, 40bp inside the initial guidance of 3% area. The bonds have an expected rating of BBB- and booked orders of over $1.2bn, 4x issue size. The bonds will be issued by Yi Bright International and Linyi City Construction is the guarantor. Proceeds will be used for onshore projects and general corporate purposes.

Credit Enhanced Bonds are bonds that come with credit enhancements that can improve the credit rating of the bonds using various structures. It gives investors additional comfort that the debt would be honored by an additional external collateral, guarantee or insurance. Credit enhancements can come through an unconditional/irrevocable guarantee, letter of comfort, standby letter of credit, pledge of shares etc. Generally, Special Purpose Vehicles (SPVs) and subsidiaries issue these bonds in order to lock-in a lower yield vs. issuing bonds without a credit enhancement.

On Bundesbank head’s calls on European Central Bank to scale back bond purchases
Jens Weidmann, head of Germany’s central bank
“Inflation is not dead.” “In my estimation, the risks around the price outlook have shifted,” he said, warning of “upside risks to price developments being predominant in the euro area”. “In addition, politicians could take additional climate protection measures and thus increase energy prices.” “[Inflation] reduces the purchasing power of private households.” “Thanks to the vaccination progress, the economy in the euro area is now on the way out of the crisis.” “In order not to have to end the PEPP suddenly, however, the net purchases could be reduced step-by-step in advance.”
Fabio Panetta, ECB executive board member
“We do not seem to be on track to run the economy hot.” “Slack in the economy is likely to remain large for some time”.
On the possibility that ECB’s emergency stimulus could end next March
Robert Holzmann, Austrian central bank chief
“This is how the market sees this and I think the market gives the right assessment.” “We don’t know yet but at the moment it looks like the end is in March.” “We still have other programmes there, the APP, which can continue, changed or unchanged.”
Fabio Panetta, Central Bank Executive Board member
“A return of macroeconomic policy to the pre-pandemic status quo would be an immense wasted opportunity.” “We should recognise that what was seen as unconventional in the past is now conventional.” “This guidance creates a natural window for fiscal action.” “Governments that spend wisely today can be assured that they will not be penalised with a premature rise in borrowing costs.”
On US banks to pay extra $2bn in quarterly dividends
Jamie Dimon, JPMorgan chief executive
“Our longstanding capital hierarchy remains the same — invest in and grow our market-leading businesses . . . pay a sustainable dividend, and return any remaining excess capital to shareholders.”
David Solomon, chief executive of Goldman Sachs
“We are encouraged by the progress in reducing the capital intensity of our business as reflected in the recent stress test results.” 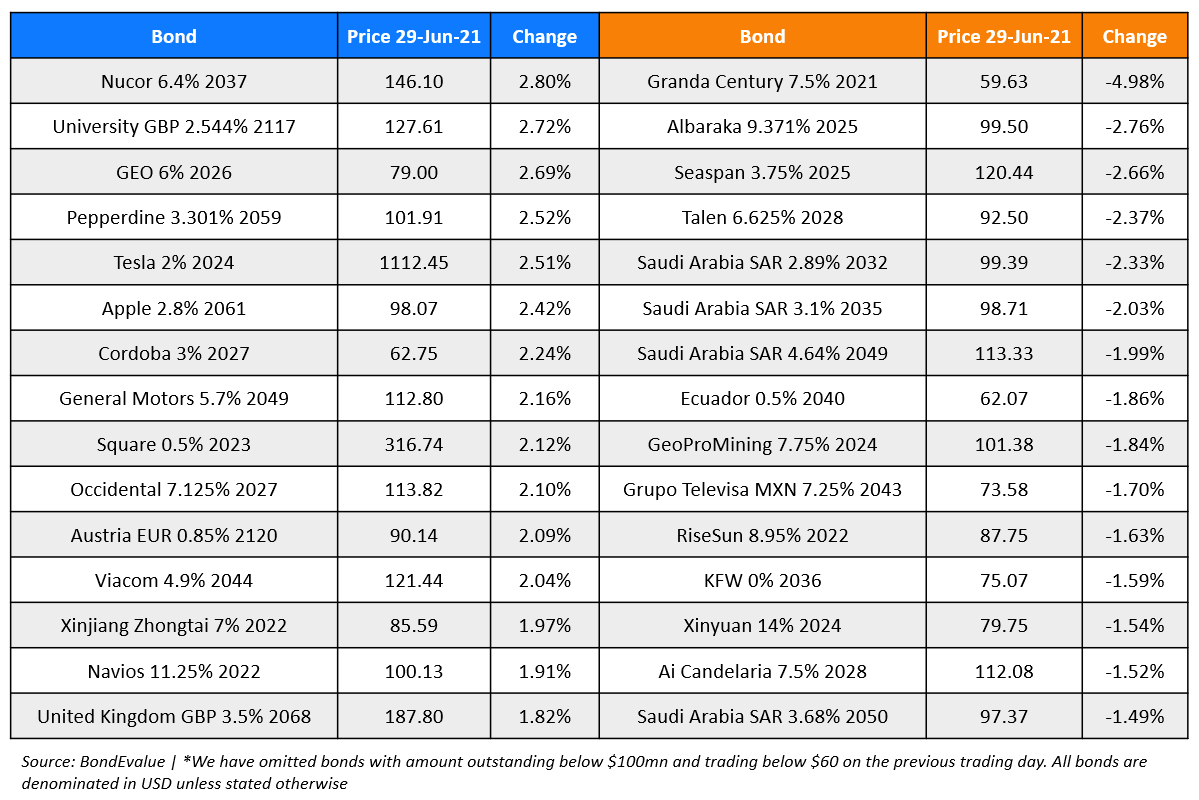