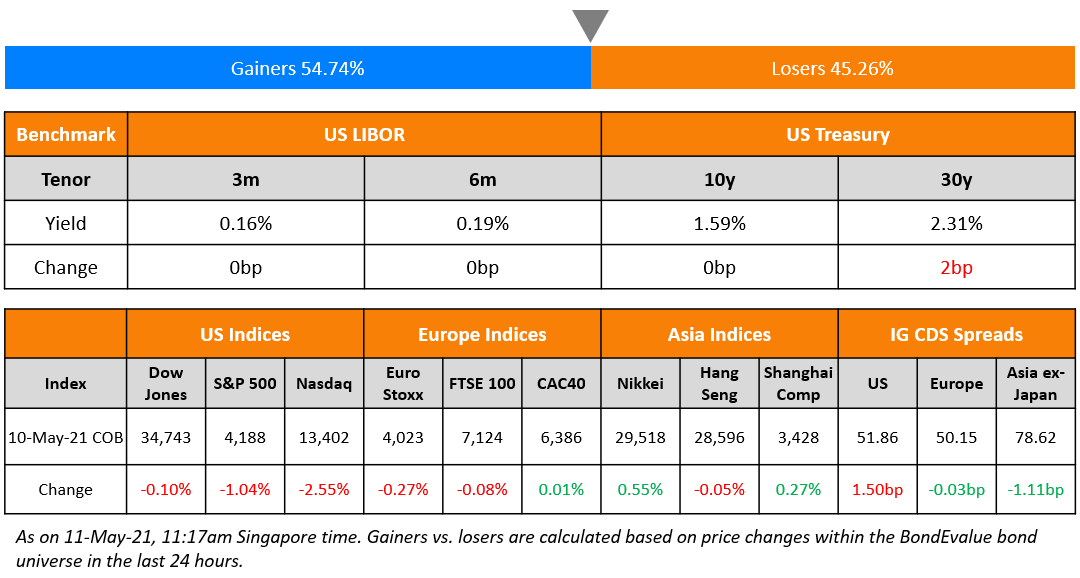 Wall Street closed lower on Monday as investors veered away from growth stocks on possible inflation fears. S&P ended 1% lower yesterday after setting a new record on Friday while Nasdaq saw a drop of 2.5%. The drop was on the back of a selloff in tech stocks led by semiconductors companies. Among the losers were Tesla, which dropped 6.4% and Facebook, down 4.2%. Friday’s ransomware cyber-attack continues to paralyze the US’s largest fuel pipeline. US IG CDS spreads were 1.5bp wider and HY widened 4.9bp.  EU main and crossover CDS spreads were flat. Asian equity markets are following the US, off to a negative start, down over 1%. Asia ex-Japan CDS spreads were 0.2bp wider. Asian primary bond markets are at its busiest in over a month with 12 new bond deals today that includes names like Country Garden, Fosun, Studio City and Vista Land. 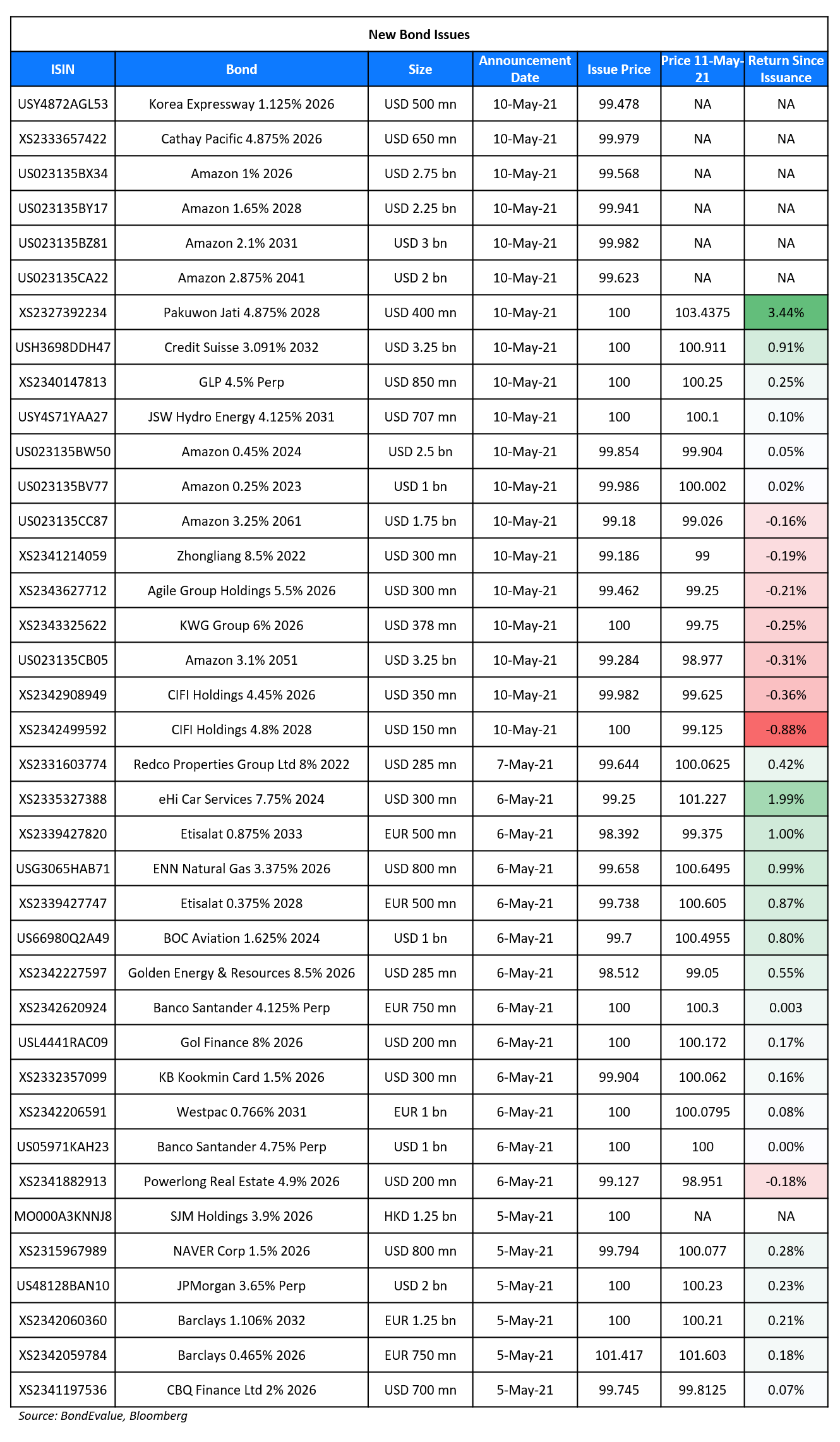 Credit Suisse raised $3.25bn via a 11Y non-call 10Y (11NC10) bond at a yield of 3.091%, 15bp inside initial guidance of T+165bp area. The bonds have expected ratings of Baa1/BBB+ with proceeds from the issuance going towards general corporate purposes.

GLP raised $850mn via a green Perpetual non-call 5Y (PerpNC5) bond at a yield of 4.5%, 37.5bp inside initial guidance of 4.875% area. The bonds have expected ratings of BB/BB+, and received orders over $3.5bn, 4.12x issue size. If the bonds are not called on the first call date, the coupon will reset to the initial spread of 373.5bp over 5Y US Treasuries, with a reset every five years thereafter. If the notes are not called after 10 years, the bonds have a coupon step up of 25bp, and another step-up of 75bp if the notes are not called by the 25th year. They are expected to have 50% equity credit (Term of the day, explained below) from S&P and Fitch for the first five years.

Zhongliang Holdings Group raised $300mn through a 364-day green bond at a yield of 9.375%, 25bp inside the initial guidance of 9.625% area. The bonds have expected ratings of B+ and received orders over $1.5bn, 5x the issue size. Proceeds will be used for debt refinancing, including funding a concurrent tender offer for its $250mn 8.750% 2021s, subject to a maximum acceptance amount equal to the issue size of the new bond.

Korea Expressway raised $500mn via a 5Y sustainability bond at a yield of 1.233%, 32.5bp inside initial guidance of T+80bp area. The bonds have expected ratings of Aa2/AA, and received orders over $1.3bn, 2.6x issue size. Asia took 68%, EMEA 13% and the US 19%. Asset/fund managers bought 36%, central banks and sovereigns, supranationals and agencies 29%, banks and private banks 26% and insurers 9%. Proceeds will be used for financing and/or refinancing eligible green and social projects under the issuer’s sustainable finance framework.

James Knightley, ING
“This new framework could open the door to more prolonged periods of loose monetary policy that need to be corrected more quickly and aggressively than the market is pricing”

“The underlying case for Chinese bonds is still very, very strong,” said Dhawan. “Because of its low correlation to global rates, its high nominal yields and high real yields form a very important part of portfolio construction.”
Kheng Siang Ng, Asia Pacific head of fixed income at State Street Global Advisors
“We are increasing our exposure to the Chinese bonds,” said Ng. “It’s hard for the markets to ignore.”
Nick Maroutsos, head of global bonds at Janus Henderson Investors
“We get asked this a lot, and my answer to whether we own or will own Chinese bonds is, ‘Not right now,’” said Maroutsos. “Ultimately, we are defensive buyers, and I have a hard time looking at emerging markets as a safe haven for investors,” he said. “Chinese government bonds aren’t going to protect you and won’t behave in a manner similar to Treasuries.”
Lucy Qiu, a strategist at UBS Global Wealth Management
“Investors still need to look for uncorrelated sources of returns, as negative bond-equity correlations may be challenged during a rapid rise in yield,” Qiu said.
On the potential trouble for Huarong investors from China’s credit rebound – in a note by Taimur Baig and team, DBS strategists
“Markets are getting a signal as loud and clear as one blasted from loudspeakers: China’s policy stance of ‘no debt guarantees’ has been extended beyond local government SOEs to large, national-level SOEs.” “Markets should know that these are not mere platitudes, if Huarong serves as an example.” “It is a success as good as can be for policymakers, without using a heavy-handed approach.”
On the hopes for new, sustainable IMF deal soon – Alberto Fernandez, Argentina President
“What we have always asked for is a deal which does not put into question our ability to develop and end inequality. I want to reach a deal that is sustainable,” he said. “I ask the IMF for understanding of the time we are living in. I hope a deal can be reached soon,” Fernandez said. “I was able to transmit to (Costa) the situation which Argentina is in and the work we are doing with the creditors to try and reach not only a deal between the IMF and Argentina but also change some rules of the international financial system which are related to the post-pandemic world,” he said.
On the difference in bond investor reactions for two Mexican shadow lender loan inconsistencies
Manuel Zegbe, an analyst at Signum Research
“Credito Real has had some challenges but they will be able to manage them,” said Zegbe. The firm “now is going to be more conservative with the loan portfolio. I’m not expecting growth in the loan portfolio, to keep solvency and liquidity at a healthy level.”
Alexis Panton, analyst at Stifel
“We would recommend taking advantage and selling into the rebound of the Credito Real curve.” “The recent spell of heightened market volatility might just be round one of a longer bout. Headline risk looks set to increase, especially now the company is under more intense scrutiny.”
Ray Zucaro, chief investment officer of RVX Asset Management
“When Alpha came out with its accounting changes, that really spooked investors in the sector,” said Zucaro. “The problem with non-bank financial institutions is that investors have very little insight into what the assets are.”
On foreigners lifting China sovereign bond holdings to record in April – Tracy Chen, portfolio manager at Brandywine Global Investment Management
“I think everyone is betting on a weaker dollar, so the CNY should benefit, and CGBs (have) become a currency play and a carry play,” said Chen 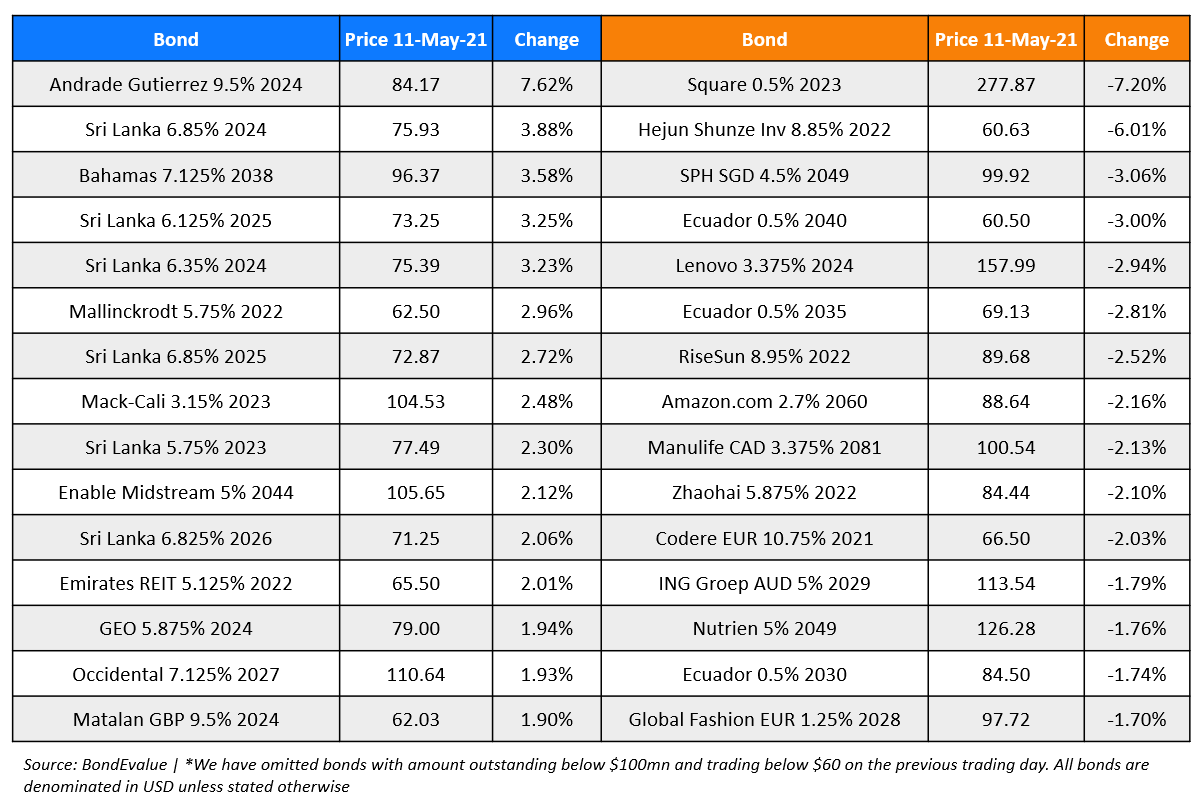