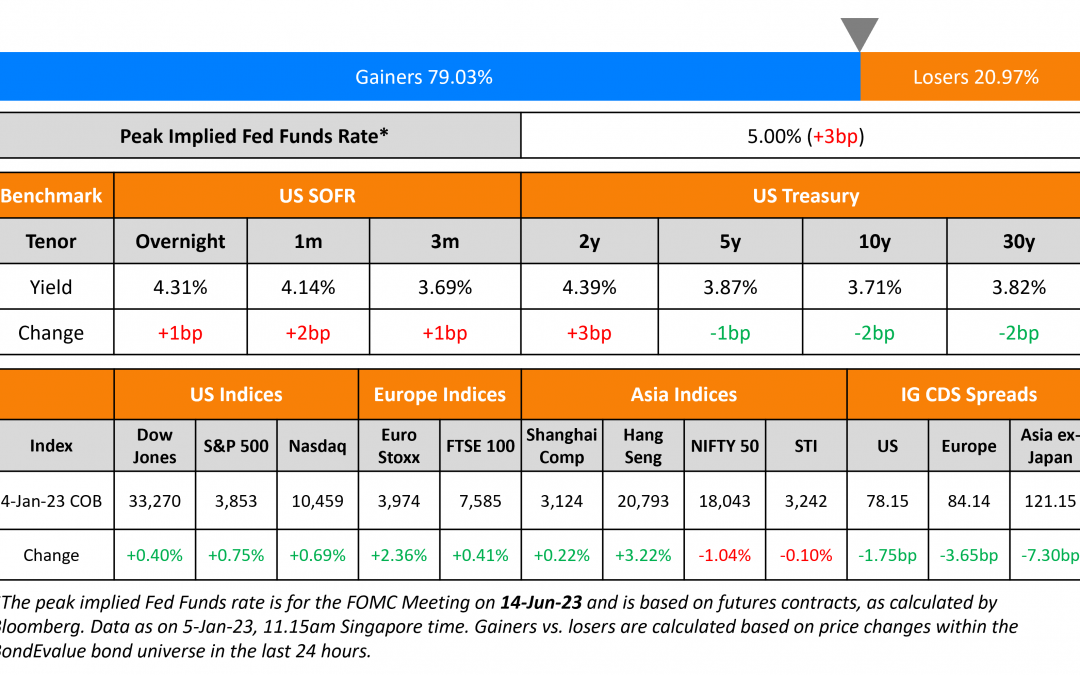 US Treasuries yields were marginally lower yesterday.  The peak fed funds rate was up 3bp to 5% for the June 2023 meeting. The probability of a 25bp hike at the FOMC’s February 2023 meeting stands at 68%, unchanged from yesterday. The FOMC’s minutes released yesterday indicated the Fed’s intention to keep “flexibility and optionality when moving policy to a more restrictive stance”. All officials agreed that the central bank should slow the pace of its rate increases. They added that they made made “significant progress” last year in raising rates to bring inflation down. They also noted that any “unwarranted easing in financial conditions, especially if driven by a misperception” by public to the Fed could complicate its price stability objectives.

On the data front, US ISM Manufacturing came in at 48.4, lower by 0.6 points from November’s 49 print. This was the second straight contraction after 29 consecutive months of expansion. Within the ISM reading, the ‘price paid’ component fell to 39.4, down 3.6 points compared to the November’s 43 – this is the index’s lowest reading since April 2020, indicating some signs of a slowing down in inflation. US equity markets ended higher, with the S&P and Nasdaq up 0.8% and 0.7% respectively. US IG and HY CDS spreads were 1.8bp and 7.9bp tighter.

European equity markets ended higher too. The European main and crossover CDS spreads tightened by 3.7bp and 21.7bp respectively. Asian equity markets have opened higher today. Asia ex-Japan CDS spreads tightened by 7.3bp. Issuers from the APAC sold about $15bn of dollar bonds on Wednesday, out of the total $38.25bn in dollar deals priced globally, as the primary markets gather steam in the beginning of the year. 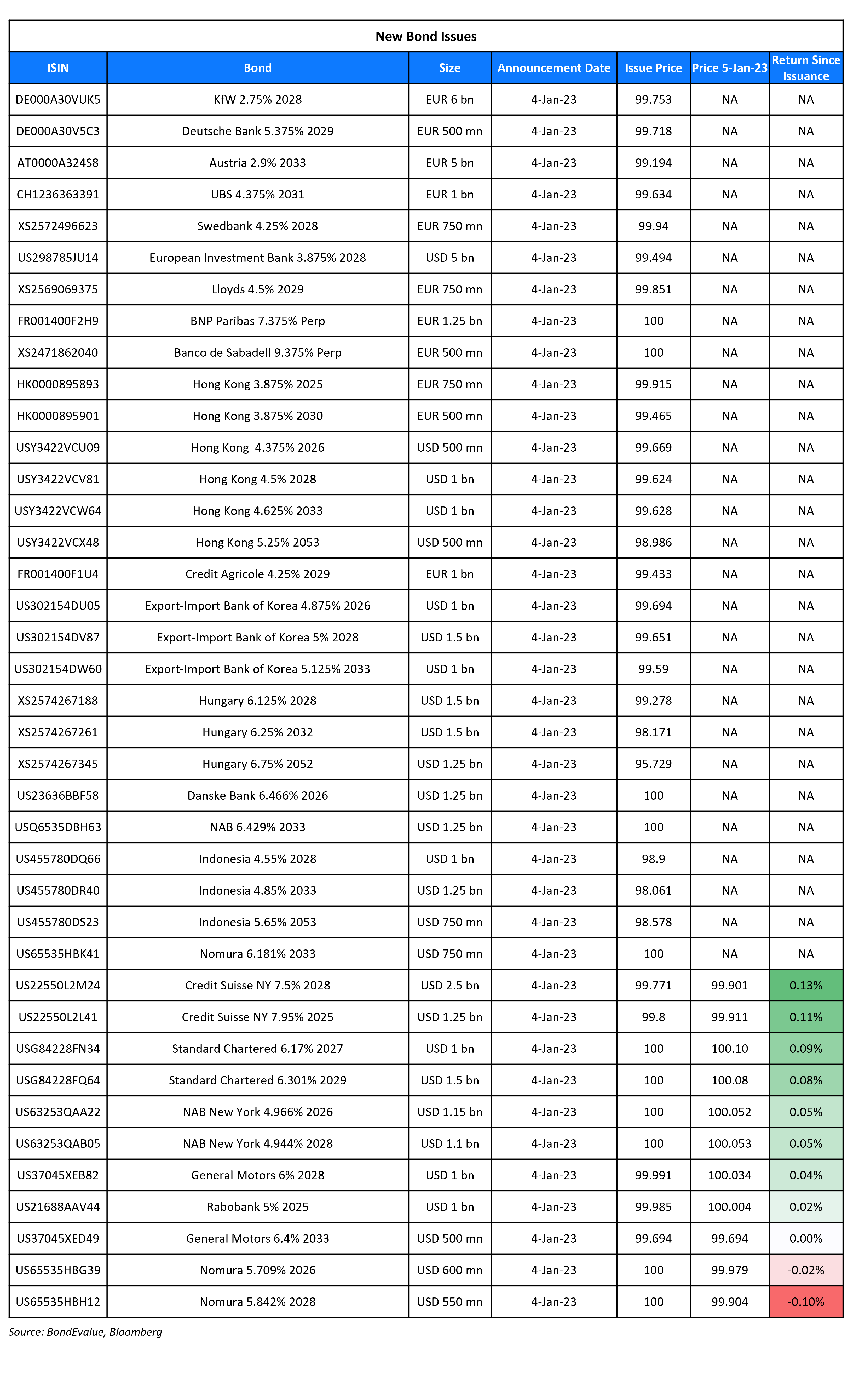 BNP Paribas raised €1.25bn via a PerpNC7.5 AT1 bond at a yield of 7.375%, 37.5bp inside initial guidance of 7.75% area. The bonds are rated A1/A-/BBB+. The coupons are fixed until the first reset date of 11 June 2030 and if not called, resets every five years at 5Y MS+463.1bp. The trigger event would occurs, at any time, the CET1 ratio falls below 5.125%. Proceeds will be used for capital adequacy purposes as AT1 capital. The net proceeds will be applied for general corporate purposes and to increase its own funds. The new AT1s priced 34.5bp over its older 6.875% Perp callable in December 2029 that are currently yielding 7.03%.

Spanish lender Banco Sabadell raised Banco de Sabadell raised €‎500mn via a PerpNC6 AT1 bond at a yield of 9.375%, a solid 62.5bp inside initial guidance of 10% area. The AT1s were priced at par with coupons payable quarterly. The bonds are rated B+ and received orders of over €2bn, 4x issue size. If not called between their first call date of 18 July 2028 and the first reset date of 18 January 2029, the bond’s coupon will reset to the 5Y MS+683bp. The trigger event would occur if the bank’s CET1 ratio falls below 5.125%. The new AT1s priced 52.5bp over its older 5% Perps callable in May 2027 that are currently yielding 8.85%. This comes after Sabadell skipped the first call on its €‎400mn Perp in October last year citing rising refinancing costs.

Indonesia raised $3bn via a three-trancher. It raised:

Hong Kong SAR raised $3bn via a four-trancher issuance. Details are given in the table below:

KEXIM raised $3.5bn via a three-tranche deal. It raised:

NAB raised $3.5bn via a three-trancher. It raised:

Blue bonds are a type of sustainable debt wherein the proceeds from such issuance are earmarked for marine/water projects related to ocean conservation (hence the name blue bonds). These are similar to green bonds, which are earmarked for green or environmentally-friendly projects. Blue bonds became popular in late 2018 when Seychelles issued the world’s first sovereign blue bond.

“Greater signs of disinflation and the threat of inflation receding is exactly what bond investors need to see. Indicators like global shipping costs and economic surveys “have been pointing to this dynamic for a while… We are now finally beginning to see it reflected in official inflation measures”

“With core inflation showing no signs of budging in the December data, the ECB is likely to remind markets that they see significant tightening in the period ahead” 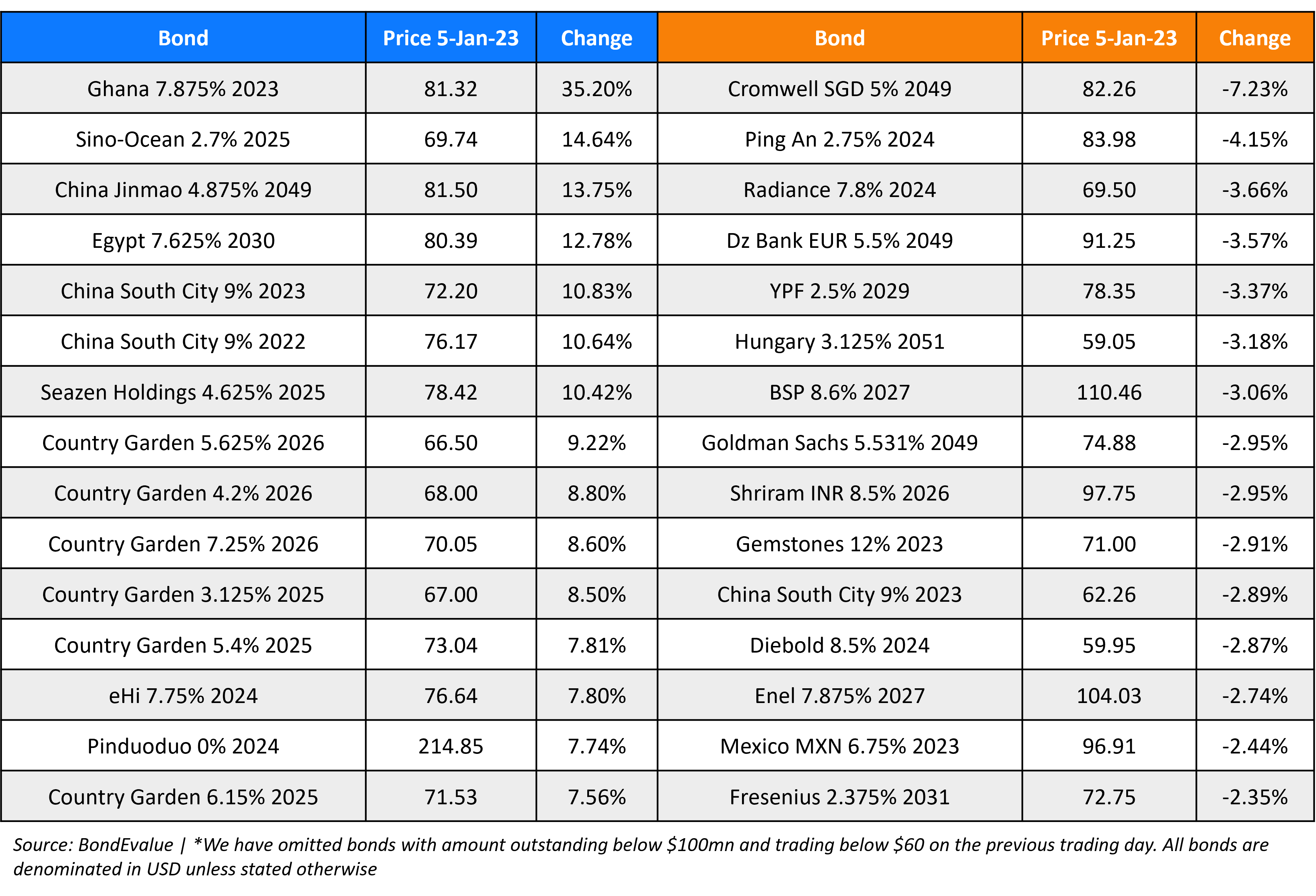