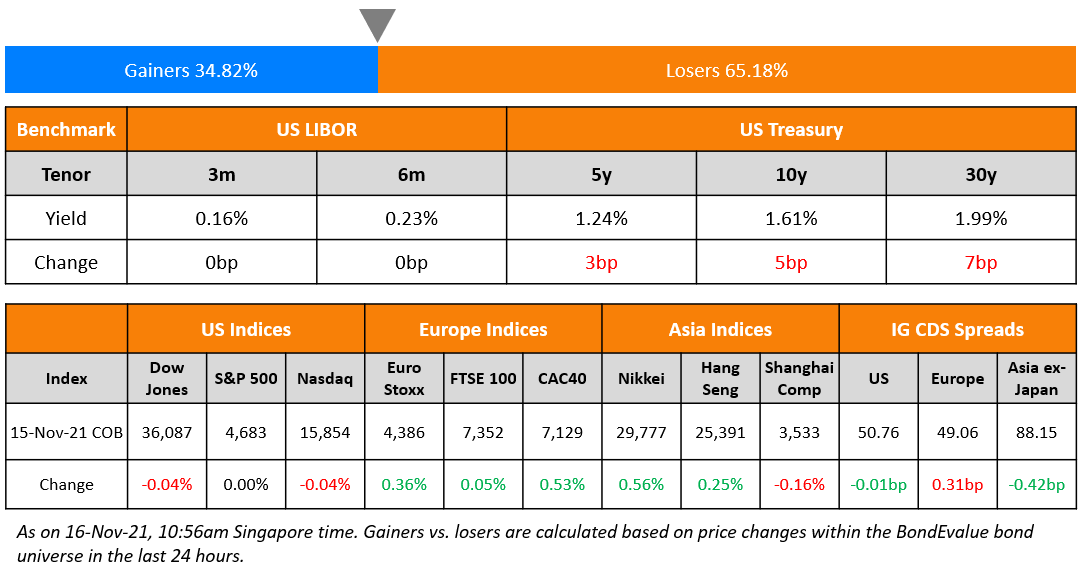 US President Joe Biden signed a $1.2tn bipartisan infrastructure bill into law. Chinese Industrial Production for October rose 3.5% YoY, higher than the forecasted 3% while Fixed Asset Investments came slightly lower than forecasts of 6.2% at 6.1%. Retail Sales saw a stellar beat in October, up 4.9% YoY vs. 3.5% forecasted. 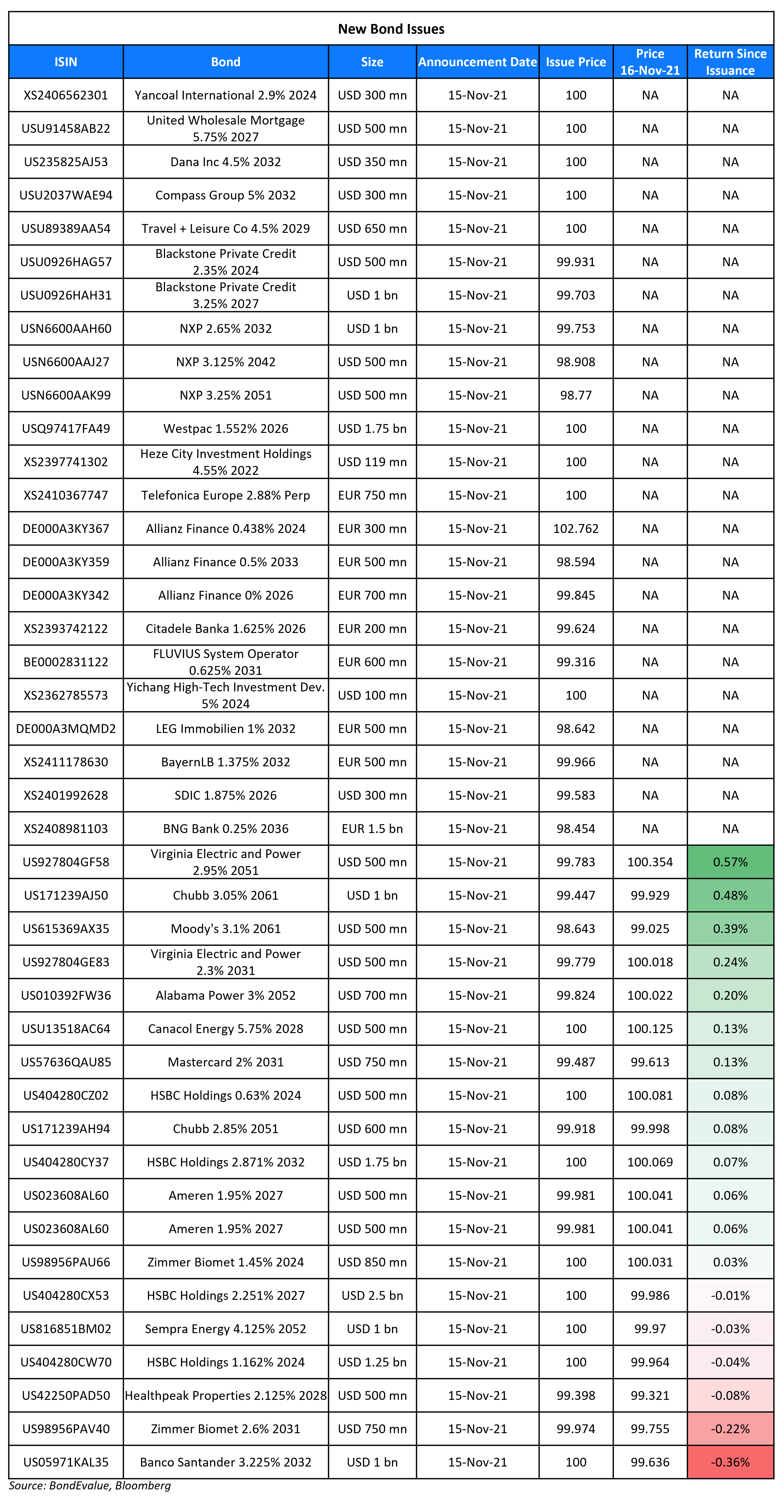 HSBC raised $6bn via a four-tranche deal. It raised:

The new 3Y fixed rate bonds are priced 19.2bp wider than the existing 3.95% 2024s that yield 0.97%. The bonds have expected ratings of A3/A–/A+. Proceeds will be used for general corporate purposes.

Temasek is raising up to S$350mn via a 5Y bond at a yield of 1.80%, 6bp inside initial guidance of 1.86% area. S$250mn was priced and will be allocated to institutional, accredited and other specified investors, while up to S$100mn will be open for retail investors today. In the event of oversubscription, Temasek may upsize the combined offer to a maximum of S$500mn. The bonds have expected ratings of Aaa/AAA (Moody’s/S&P), and the institutional tranche received orders over S$1.542bn, 6.2x issue size. Singapore bought 85% while the remaining 15% went to others. Insurers took 41%, central banks and agencies 33%, banks 13%, fund managers 12%, while corporations and others received the remaining 1%. The bonds are issued by Temasek Financial IV and guaranteed by Temasek Holdings.

State Development & Investment Corp (SDIC) raised $300mn via a 5Y bond at a yield of 1.963%, 50bp inside initial guidance of T+125bp area. The bonds have expected ratings of A2/A+ (Moody’s/Fitch), and received orders over $2.5bn, 8.3x issue size. Proceeds will be used for overseas project construction and general corporate purposes. The bonds are issued by Rongshi International Finance and guaranteed by SDIC. Banks bought 60%, asset managers 17%, financial institutions 15% and government and sovereign-related investors 8%. APAC took 99% and the rest went to EMEA. The new bonds are priced 32.7bp tighter to its existing 3.625% May 2027s that yield 2.29%.

Yichang High-Tech Investment Development raised $100mn via a 3Y bond at a yield of 5%, 10bp inside initial guidance of 5.1% area. The bonds have expected ratings of BB+ (Fitch). Proceeds will be used for offshore debt refinancing.

Turkey’s corporates, banks and government have a combined $13bn in external debt due through November and December, of which $8bn is due in November. This is the largest amount due over the next 10 months as per Bloomberg data. Bloomberg notes that these repayments tend to increase demand for foreign currency, thereby adding downward pressure on the lira. Further, as the government expects gas consumption to rise 25% in 2021, there is likely to be an increase in demand for natural gas from overseas sources that will also lead to a higher demand for dollar, that could further weaken the lira. Given the current backdrop of the central bank cutting rates twice in September, it underlines the risk of such actions on the economy, which relies heavily on external financing. The lira is already down 25% YTD to a record low and continues to trade weak at 10.01 to the US dollar.

“We do not expect China’s property woes to have a big impact…[The Fed’s] job is to highlight the risks. He said mainland China’s recent debt crisis led by property companies will not be a big issue because the country has made strides in improving transparency and regulations.

“They will probably start after June or a little bit later, and go to a higher rate than people think… I certainly expect the peak to be well above the 1.75% price point… The crystal ball is cloudy as you get further out.”

“It seems to be plausible we get to 3.5% or 4% and in addition that we push the economy into a recession”

With current high valuations, there’s little room for error, and even slight stresses can weigh on returns, . On top of that, corporate earnings are increasingly at risk from supply-chain problems and wage pressure. The likelihood of a mid-cycle correction is high.

“We’ve been running short duration in our portfolios” 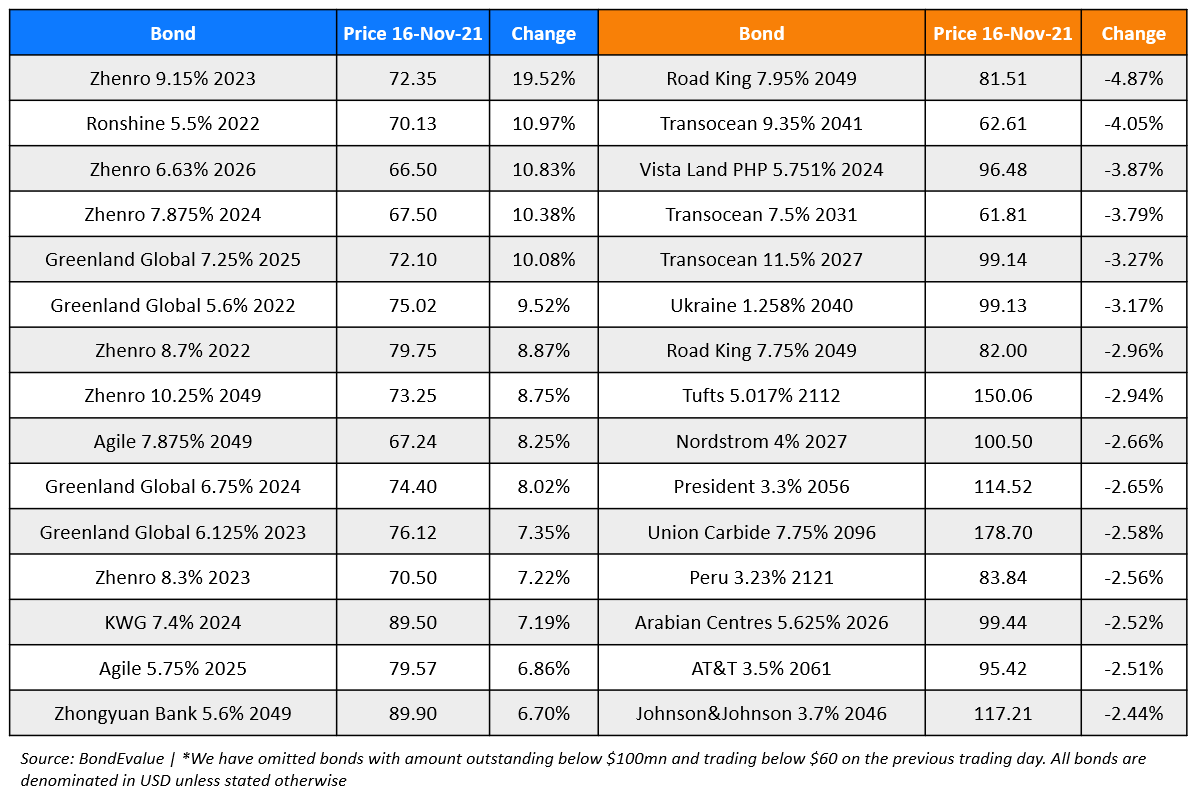