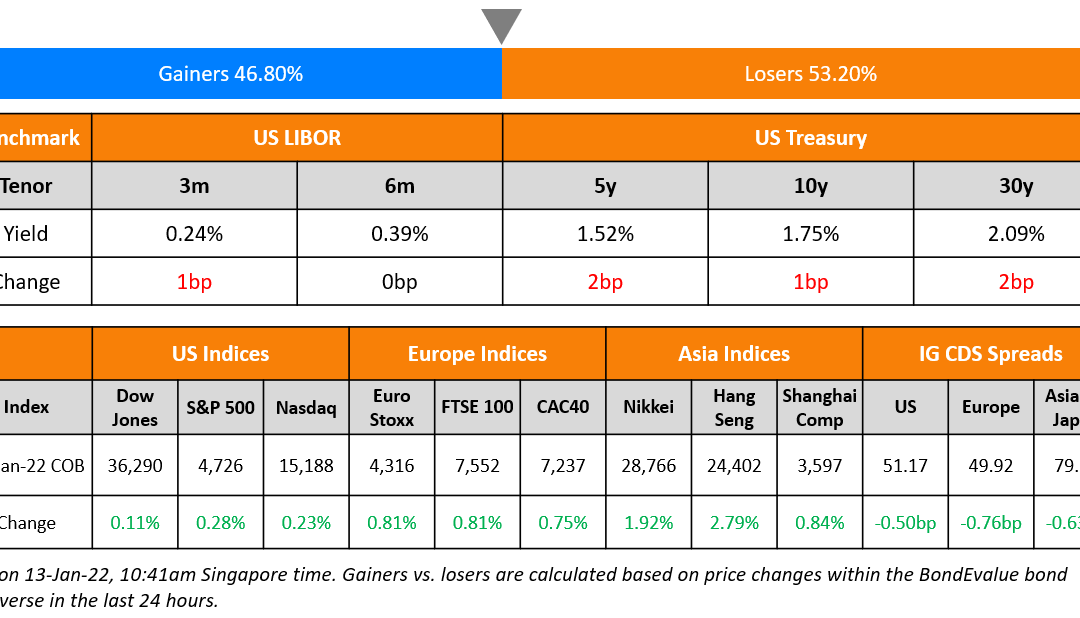 US CPI shot up 7% in 2021, the highest 12-month gain since 1982. Core CPI jumped 5.5% YoY, the biggest rise since 1991, led by led by higher prices for shelter and used vehicles. With the rise in inflation Fed’s Lael Brainard and Mary Daly have spoken about addressing the rise in inflation with rate hike expectations rising. The probability of a March 2022 rate hike by the Fed have risen from 34% on December 13, 2021 to 74% on January 13, 2022 with Goldman Sachs now expecting 4 hikes in 2022.

BNP Paribas raised $3bn via a two-tranche deal. It raised:

The bonds have expected ratings of Baa1/A-.

Singapore Airlines raised $600mn via a 7Y bond at a yield of 3.493%, 30bp inside the initial guidance of T+210bp area. The bonds are unrated, and received orders over $1.2bn, 2x issue size. Proceeds will be used to fund aircraft purchases and aircraft-related payments, general corporate as well as working capital needs, including debt refinancing. This is Singapore Airlines’ second US dollar bond.  Asset and fund managers received 74%, banks 22% and private banks 4%. APAC bought 71%, EMEA 23%, offshore US 5% and others 1%.

The bonds have expected ratings of Baa1/BBB+ (Moody’s/Fitch), and received combined orders of $3.2bn, 4.5x issue size. The bonds are issued by CCTHK 2021 and guaranteed by China Chengtong HK. China Chengtong Holdings Group has provided a keepwell and a liquidity support deed.

Woori Bank raised $500mn via a 5Y sustainability bond at a yield of 2.096%, 30bp inside initial guidance of T+90bp area. The bonds have expected ratings of A1/A+ (Moody’s/S&P), and received orders over $1.3bn, 2.6x issue size. Proceeds will be used for eligible categories in line with the bank’s green, social and sustainability bond framework. Banks took 59%, asset and fund managers 27%, and central banks, agencies and insurance companies 14%. Asia bought 84%, EMEA 11% and the US 5%.

A Formosa bond is a bond which is issued in Taiwan by a foreign bank or corporation but is not denominated in the New Taiwanese Dollar. It is a way for multinationals to raise capital in Taiwan. To qualify as Formosa, borrowers must have credit ratings of BBB or higher. Formosa bonds are listed and traded on the Taipei Exchange.

“I definitely see rate increases coming, as early as March, even, because it really is clear that prices have been uncomfortably high. American consumers are feeling the pain.”

“The economy’s in a much stronger place than it was when we started doing the reductions last time… Frankly I would like to reduce it as fast as we can conditional on it not being disruptive to the functioning of the financial markets.”

“Inflation is too high, and working people around the country are concerned about how far their paychecks will go… Our monetary policy is focused on getting inflation back down to 2% while sustaining a recovery that includes everyone. This is our most important task.”

“There’s still unfinished business in the market… As monetary policy is shifting, it’s too early to think that the interest rate move is done, or that it’s all priced in. There’s still a lot of room for real yields to move higher… We think that would fall more heavily on growth relative to value. We also think that it would be consistent with a lower overall market multiple… There’s a shift in inflation tolerance from the Fed, there could be a shift in the reaction function too”.

On BlackRock’s Rieder Thinks the Fed Will Avoid an Overshoot on Rates – Rick Rieder, CIO of global fixed income at BlackRock on Twitter

In our view, it would be a mistake to go significantly deeper at this point, as pressure on growth, #employment and financial #markets can react in a more extreme way than required to bring down inflation, which is likely evolving toward a lower trajectory in the coming months.

“This year’s IPOs are derived from the last several years’ boom of the property management industry, supported by favourable government policies… Developers list these units to have another financing channel… “Developers will be more cautious and their standard for ideal M&A targets will be higher in a tough environment. The methods of M&A will be more versatile, they may be more likely to keep a certain stake in the property management unit to maintain their position in this segment.”

On Erdogan vowing to tame Turkish inflation as scepticism grows

“The swelling inflation is not in line with the realities of our country.”

“The deeply negative real rates and the high level of loan growth are likely to keep inflation elevated and continue to put pressure on the lira”. It expected Turkish authorities to attempt “more administrative and regulatory measures” to curb inflation. 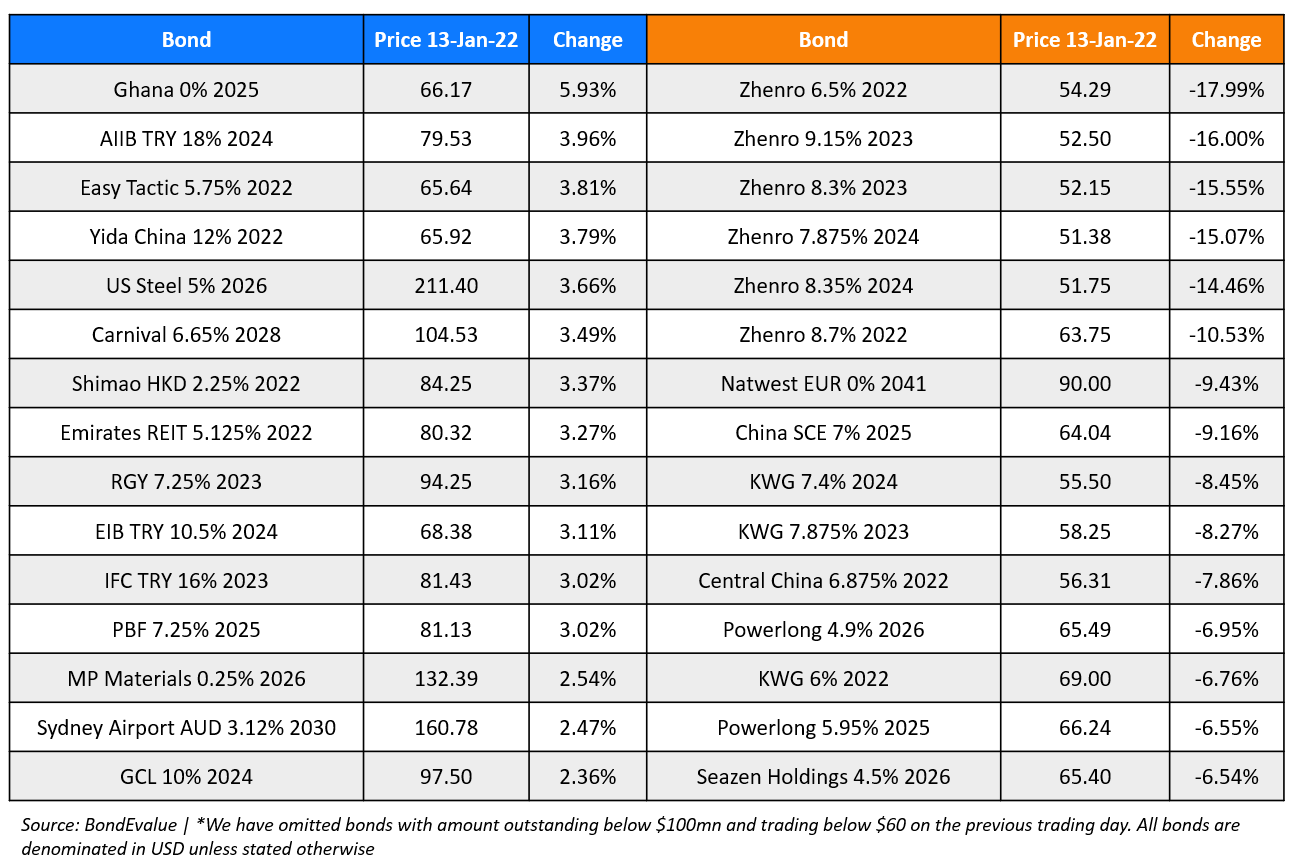