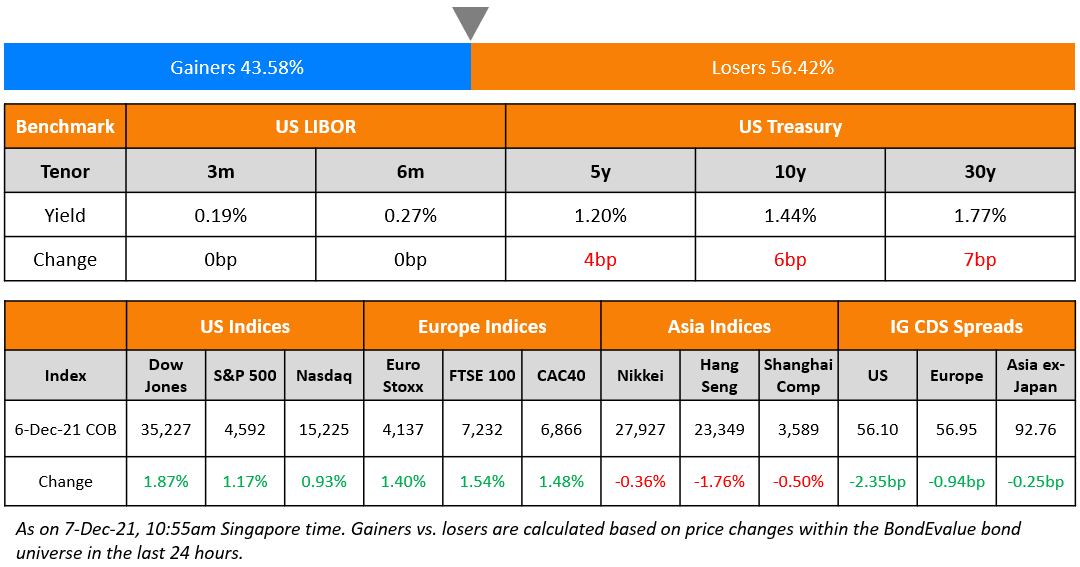 US equity markets recovered on Monday with the S&P and Nasdaq closing 1.2% and 0.9% higher. All sectors were in the green led by Industrials, Consumer Staples, Energy and Utilities, up over 1.5% each. US 10Y Treasury yields moved 6bp higher to 1.44% as the risk-off move ebbed. European markets were higher too with the DAX, CAC and FTSE down 1.4%, 1.5% and 1.5% respectively. Brazil’s Bovespa was up 1.7%. In the Middle East, UAE’s ADX was up 2.6% while Saudi TASI was down 1.1%. Asian markets have opened higher – Shanghai, HSI, STI and Nikkei were up 0.1%, 1.5%, 0.3% and 1.9% respectively. US IG CDS spreads tightened 2.4bp and HY CDS spreads tightened 12.4bp. EU Main CDS spreads were 0.9bp tighter and Crossover CDS spreads were 3.9bp tighter. Asia ex-Japan CDS spreads tightened 0.3bp.

The PBOC said it will reduce the Reserve Requirement Ratio (RRR) for most banks’ by 50bp which will help release RMB 1.2tn ($188bn) in liquidity. Analysts note that the tone on the housing sector was dovish and that the Politburo has recognized downward pressures on the economy. Bloomberg notes however, that the PBOC downplayed any expectations that it was the start of of an easing cycle by notign that the RRR cut was a “regular monetary policy action”. German Factory Orders fell 6.9% MoM in October vs. forecasts of a -0.5% print. 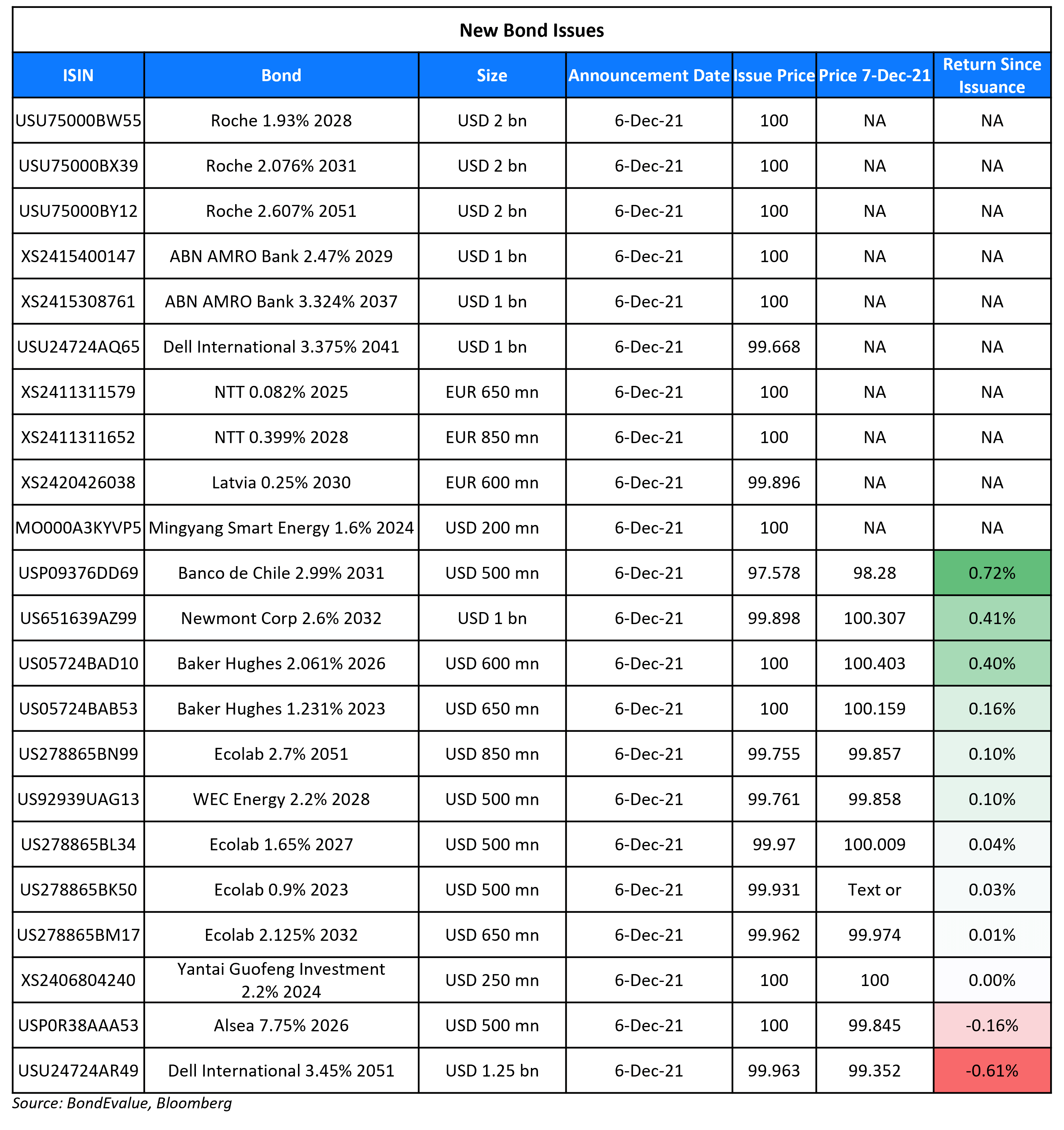 Dell raised $2.25bn via a two-tranche deal. It raised:

NTT raised €1.5bn via a dual-tranche deal. It raised:

Yantai Guofeng Investment Holdings Group raised $250mn via a 3Y bond at a yield of 2.2%, 50bp inside initial guidance of 2.7% area. The bonds have expected ratings of BBB+ (Fitch). Proceeds will be used for project construction and working capital. The bonds are issued by wholly owned subsidiary Junfeng International and guaranteed by the parent.

Del Monte Pacific raised $90mn via a 3NC2 bond at a yield of 3.75%. The bonds are unrated. Proceeds will be used for general corporate purposes, including refinancing and the redemption of the borrower’s preference shares. The bonds come with a change of control put at 101 prior to December 9, 2023, and at par after. There is also an equity clawback at par plus coupon prior to that date, and a make-whole redemption at par plus applicable premium. The notes can be redeemed after December 9, 2023 at par plus half of the coupon i.e., 101.875.

Kung-fu bonds are offshore USD denominated bonds issued by Chinese issuers, aka Chinese dollar bonds. These issuances offer a source of funding from offshore markets for local borrowers and help build an international investor base. The Kungfu bond market has been primarily dominated by government related institutions, banks and real estate developers. Bloomberg reported on Monday that among 1,008 USD denominated Chinese offshore “kungfu” bonds they track, Jingrui saw the biggest daily price change gaining 8.19 cents on the dollar while Easy Tactic declined the most, by 4.81 cents.

“With underlying inflation dynamics expected to remain weak over the medium term under the baseline, the ECB should look through transitory inflation pressures and maintain a highly accommodative monetary policy stance… Upcoming wage negotiations, which are expected to be more frequent than in previous years after many contract renewals were put on hold during the pandemic, will need close monitoring… The ECB should also stand ready to scale down and then terminate asset purchases and TLTROs, followed by a gradual adjustment of policy rates, should high inflation prove to be more durable.”

“Treasury is cutting the amount of the most liquid Treasuries and the Fed is stopping its buying of the least liquid… And what we’ve seen overall in the Treasury market is that liquidity is more of a mirage. The Fed still is basically the only real balance sheet in town.”

The combination is a mechanism for more bouts of illiquidity and volatility. If the Fed is not there, others in the market will be less willing to provide liquidity in off-the-run securities. And at the same time the Treasury is cutting on-the-run issuance.”

“Off-the-runs have been outperforming on-the-runs over the last year and half given the Fed’s the biggest player in the game and they are only buying off-the-runs… there’s going to be a need for someone else to finance and own off-the-runs, and that is probably going to be the hedge-fund community or real end-users.”

“The RRR cut came sooner than the market had expected, which is a reflection of the PBOC’s strong willingness to ease growth concerns… China’s 10-year yields should stay within a range of 2.8%-2.9% with limited support from the RRR cut, as the market waits to see whether the easing would be effective in offsetting growth headwinds.” 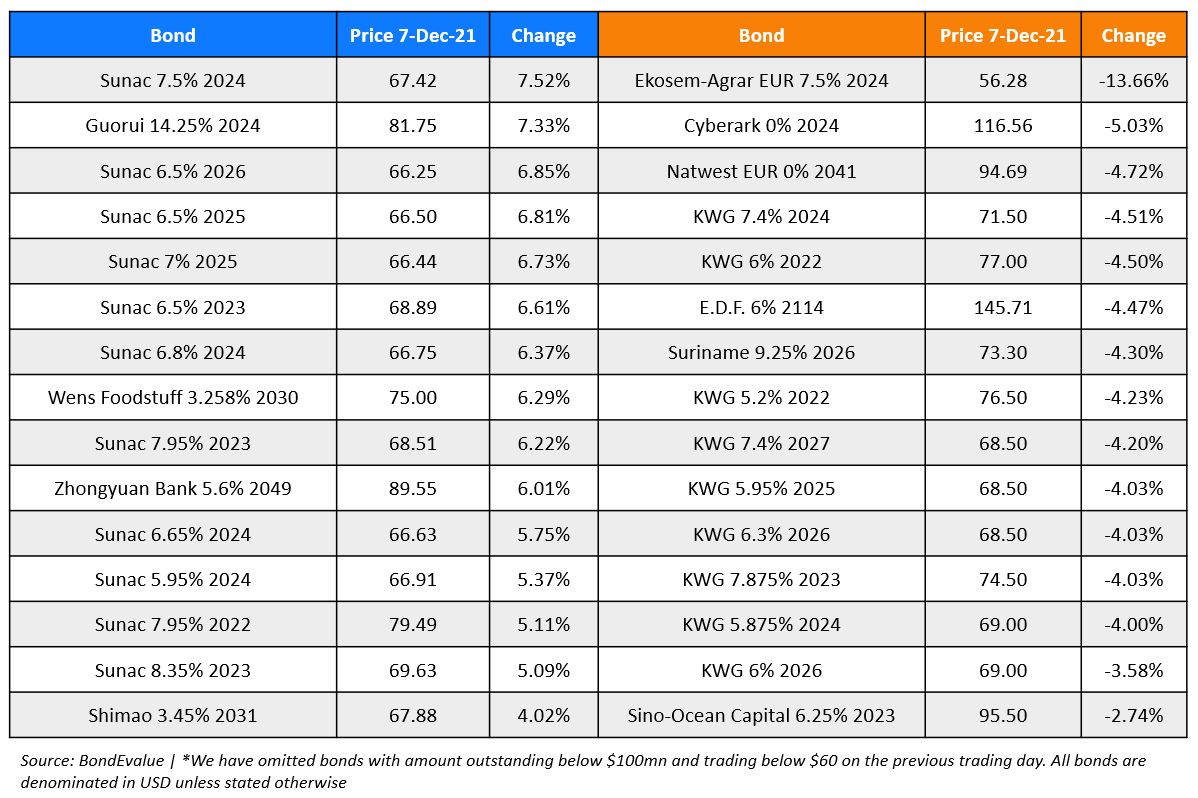