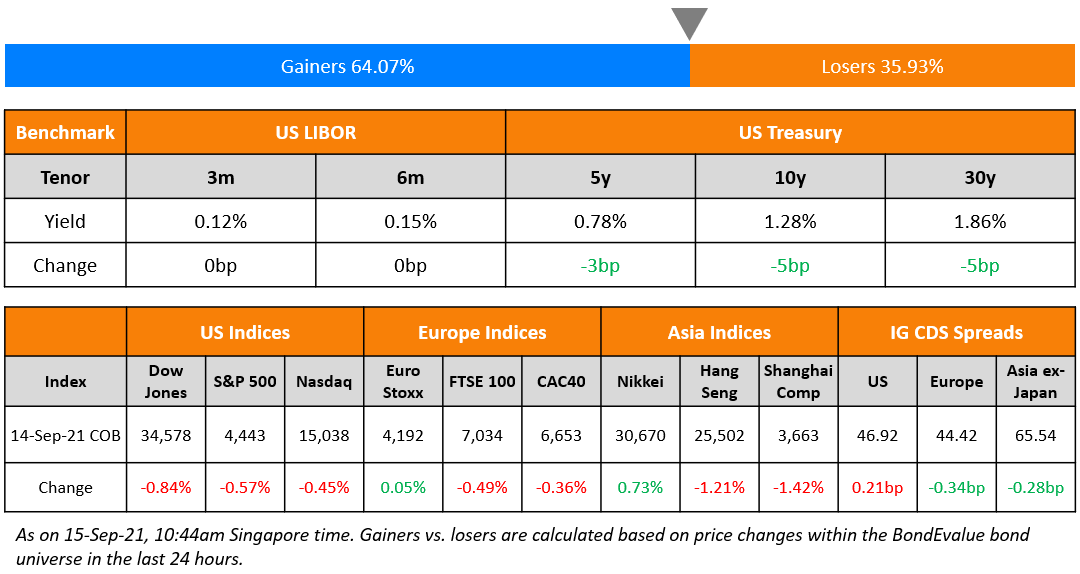 US markets dipped again despite CPI numbers suggesting that inflation could be cooling off – S&P was down 0.6% taking the MTD losses in September to 1.8% while Nasdaq slid 0.5% marking a fifth straight day of losses. All eleven sectors closed in the red with Energy, Financials, Industrials and Materials shedding between 1.2% and 1.6%. European stocks looked for direction – DAX was marginally up 0.1% while FTSE and CAC lost 0.5% and 0.4%. Brazil’s Bovespa ended 0.2% lower. Saudi TASI was down 0.1% while UAE’s ADX was broadly flat. Asian markets have started the day with a sell-off – Nikkei and HSI were down 0.7% to 0.8% and Shanghai and Singapore’s STI were down more than 0.3%. US 10Y Treasury yields were down 4bp to 1.28% after the US CPI report. US IG and HY CDX spreads widened 0.3bp and 0.6bp respectively. EU Main CDS spreads were 0.3bp tighter and Crossover CDS spreads tightened 1.9bp. Asia ex-Japan CDS spreads tightened 0.3bp.

The US Consumer Price Index (CPI) rose 0.3% MoM and 5.3% YoY. This was the slowest increase in six months and was lower than the expectations of 5.4% indicating a easing price pressures and leading to a rally in the longer tenor bonds. Liz Ann Sonders, Charles Schwab chief investment strategist said, “What we need to see to be fundamentally markets supportive is a continued easing in the inflation piece without deterioration in the economic outlook,” adding, “The next couple of weeks, economic data points become even more important to see whether it confirms the the weakness that we saw on the August jobs report or starts to suggest that maybe we’re seeing an improvement.” With the drop in Treasury yields, longer tenor corporate bonds of names like HSBC, ChemChina, Transocean, Occidental rose over 1%. 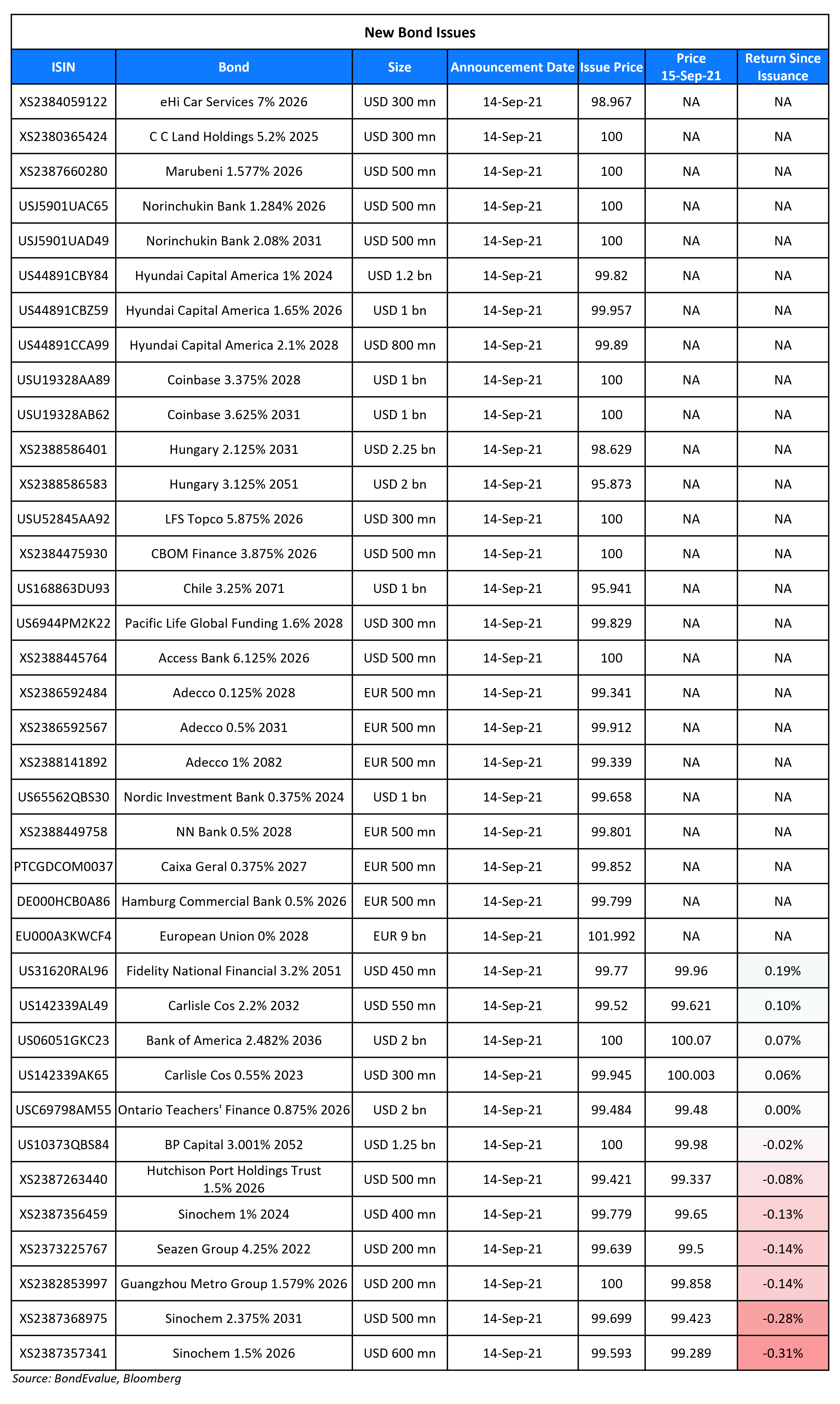 Seazen Group raised $200mn via a 364-day bond at a yield of 4.625%, 22.5bp inside the initial guidance of 4.85% area. The bonds are unrated, and received orders over $850mn, 4.3x issue size. The bonds are issued by Future Diamond and guaranteed by Seazen Group and Seazen Resources Capital Group.  The new bonds are priced 45.5bp wider to its existing 6.45% bonds due June 2022 issued by guarantor Seazen Group that currently yield 4.17%.

The bonds have expected ratings of Baa1/BBB+ (Moody’s/S&P). Hyundai Capital America is the finance provider for the Hyundai and Kia car brands in the US, and is a subsidiary of Hyundai Motor Group.

OUE Treasury raised S$150mn via a 5Y bond at a yield of 3.5%, 20bp inside initial guidance of 3.7% area. The bonds are unrated, and received orders over S$178mn, 1.2x issue size. The bonds will be issued by OUE Treasury and guaranteed by its parent. Singapore accounted for 95% while others made up 5%. Private banks bought 72%, fund managers 25% and banks 3%.

Sinochem raised $1.5bn via a three-tranche deal. It raised:

The bonds have expected ratings of A–/A (S&P/Fitch), and received combined orders over $4.5bn, 3x issue size. The bonds are issued by Sinochem Offshore Capital and guaranteed by Sinochem Hong Kong (Group). Its parent Sinochem Group will provide a letter of support.

Guangzhou Metro Group raised $200mn via a 5Y green bond at a yield of 1.579%, 45bp inside the initial guidance of T+125bp area. The bonds have expected ratings of A+ (Fitch), and received orders over $2bn, 10x issue size. Proceeds will be allocated to finance and/or refinance eligible green projects as defined in the company’s green finance framework. The bonds will be issued by wholly owned subsidiary Guangzhou Metro Investment Finance (BVI) and guaranteed by Guangzhou Metro Investment Finance (HK). Guangzhou Metro Group has provided a keepwell deed and a deed of equity interest purchase undertaking. The new bonds are priced 11.1bp tighter to its existing 1.507% 2025s that currently yield 1.69%, despite the longer tenor. APAC bought 98% and EMEA 2%. Banks and financial institutions took 55%, asset managers, fund managers and hedge funds 42%, while insurers and private banks took 3%.

C C Land Holdings raised $300mn via a 4NC2 bond at a yield of 5.2%, 30bp inside the initial guidance of 5.5% area. The bonds are unrated, and received orders over $1.3bn, 4.3x issue size. Proceeds will be used for debt refinancing and general working capital. The bonds are issued by wholly owned subsidiary Perfect Point Ventures and guaranteed by C C Land Holdings. Asian investors bought 99% while EMEA bought 1%. Private banks, ultra-high-net-worth and corporates received 82%, fund managers 13%, and banks and financial institutions 5%.

The Republic of Chile raised $1bn via a 50Y social bond at a yield of 3.42%, 32bp inside the initial guidance of T+190bp area. The bonds have expected ratings of A1/A/A-. The issuer will invest an amount equal to the proceeds from the bond sale, net of underwriting discount and expenses, into projects that may qualify as “eligible social expenditures” under Chile’s Sustainable Bond Framework.

A tender offer is an offer made by an issuer to bondholders to buyback their bonds. In return, the bondholders could get either cash or new bonds of equivalent value at a specified price. The issuer does this to retire some of its old debt and can use retained earnings to fund the purchases without affecting the liquidity position of the company. Tender offers have a deadline date before which holders must tender their bonds back. The Indonesian sovereign has launched a tender offer for 8 of its USD denominated bonds.

“The softer inflation prints caused investors to push back on bets that the Fed could move sooner to taper bond purchases. Easing inflation would take the heat off the Fed to move prematurely…So the evidence does appear to be building that peak inflation has passed. That said, supply chain bottlenecks are expected to persist for a while so it’s unlikely that either PPI or CPI will drop dramatically or rapidly”

“Wells Fargo is simply ungovernable…irredeemable repeat offender…You owe your customers, your investors, and your regulators an explanation for Wells Fargo’s ongoing inability to meet legal and regulatory requirements”

“If as expected Evergrande is defaulting on its debt and goes through a restructuring, I don’t see why it would be contained. There are other developers that are suffering from the same problem of no access to liquidity and have extended themselves too much…Millions of contracts with multiple counterparties, everyone was trying to work out their exposure. With Evergrande it depresses the entire real estate sector.”

The government has worked tirelessly to drive de-leveraging in the bloated real estate sector, so throwing a lifeline to Evergrande now is unlikely”

“We do not believe the government has an incentive to bail out Evergrande (which is a private-owned enterprise)… But they will also not actively push Evergrande down and will supervise a more orderly default, if any, in our view”

“There is so much innovation and disruption taking place in Latin America, and I believe the business opportunities there have never been stronger…Latin America is a critical part of our strategy.” 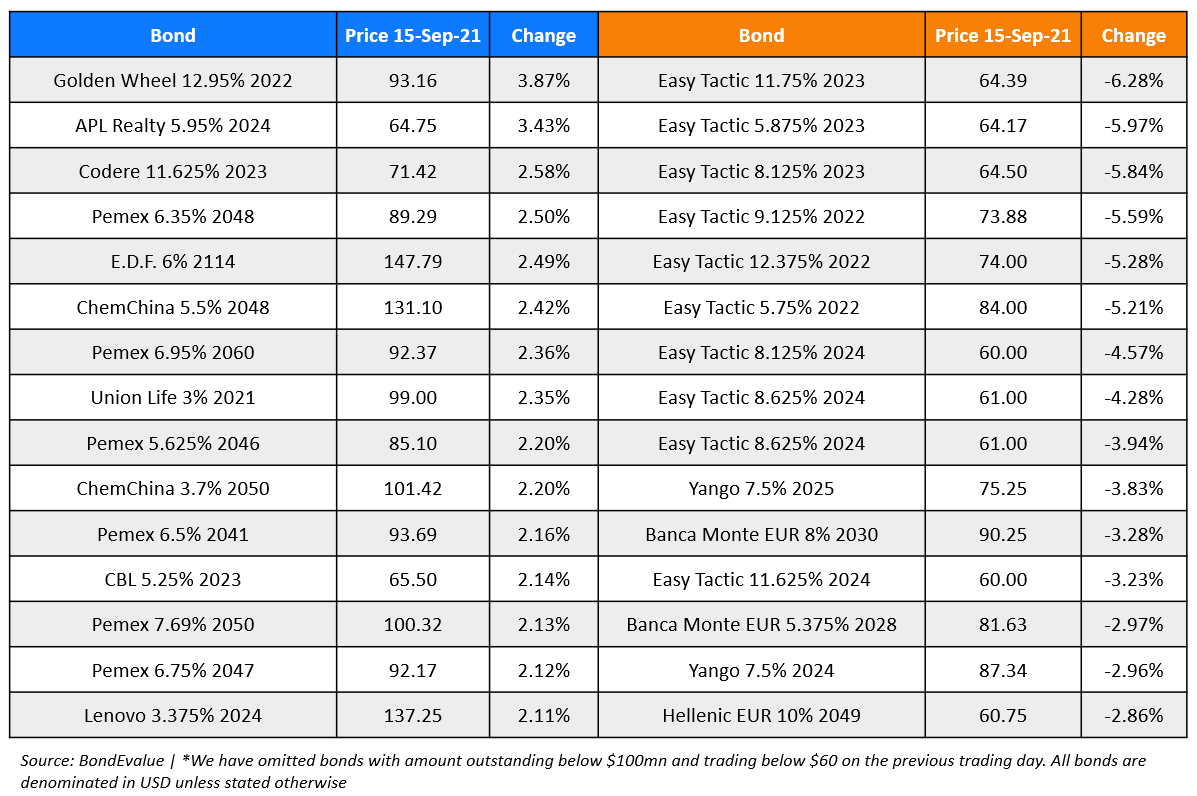