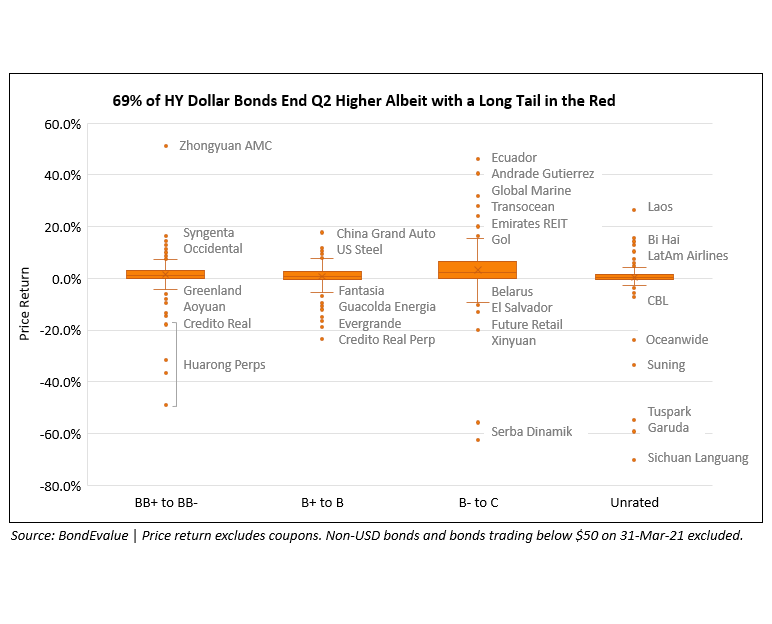 The second quarter of 2021 saw a significant reversal in fortunes after a gloomy first quarter. 67% of dollar bonds in our universe delivered a positive price return ex-coupon in Q2 as compared to 74% of dollar bonds delivering negative returns in Q1. Meanwhile, the month of June saw a continuation of May’s upward trend with 54% of the bonds delivering positive price returns. The US 10Y Treasury yield began Q2 at ~1.74% and later dipped to end Q2 at 1.47%, despite a pick-up in inflation across the US to a three-decade high of 3.4%. This is in contrast to Q1 which saw the 10Y yield rise 25bp, which dragged investment grade bonds’ performance. The US 2s10s curve flattened to ~122bp, as compared to ~155bp at the end of Q1. This comes as the Fed sounded a slight hawkish tone in its June FOMC meeting when the new dot plot revealed at least two rate hikes in 2023 vs. no hikes till 2024 in the March meeting. 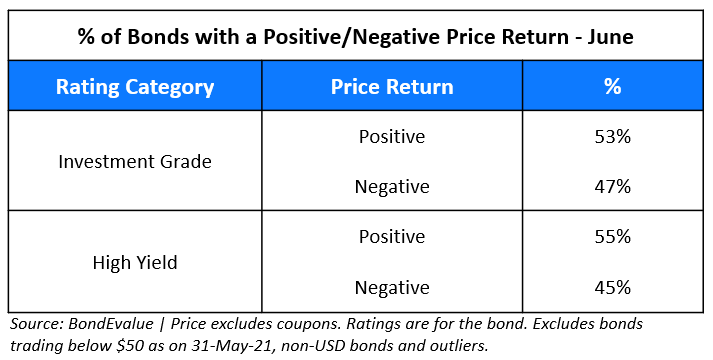 In the box and whisker plot below, we have plotted price returns ex-coupon of investment grade dollar bonds in our universe in Q2. 65% of the bonds ended the quarter higher with the losers dominated by China Huarong amid concerns over its financial position, which also spilled over to other Chinese asset managers including China Cinda and Great Wall AMC. 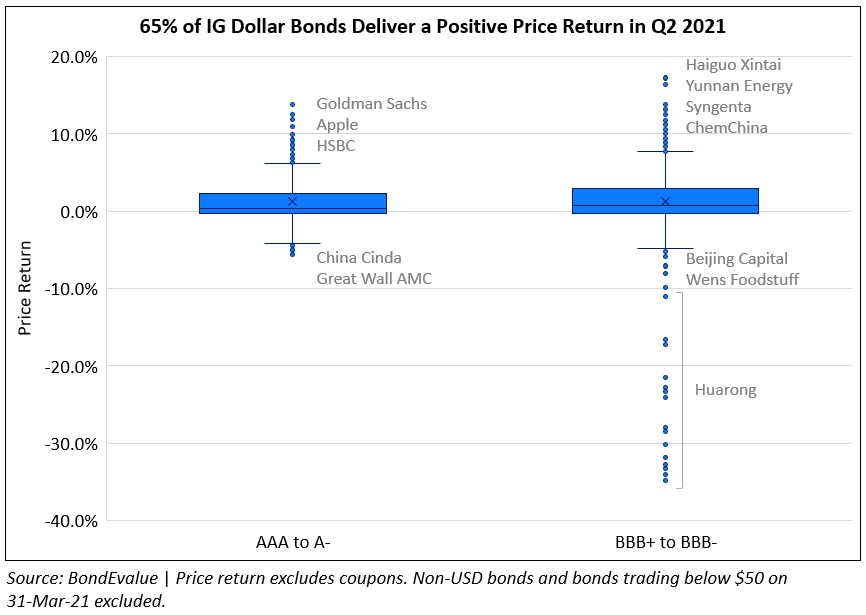 For high yield dollar bonds, we have plotted a similar box and whisker chart below. While 69% of the bonds traded higher in Q2, there was a long tail of bonds that fell during the quarter on the back of idiosyncratic events at several issuers. In terms of sectors, Chinese real estate developers dominated the losers with dollar bonds from Evergrande, Greenland, Aoyuan and Fantasia among the popular names. For more on the gainers and losers, scroll to the bottom. 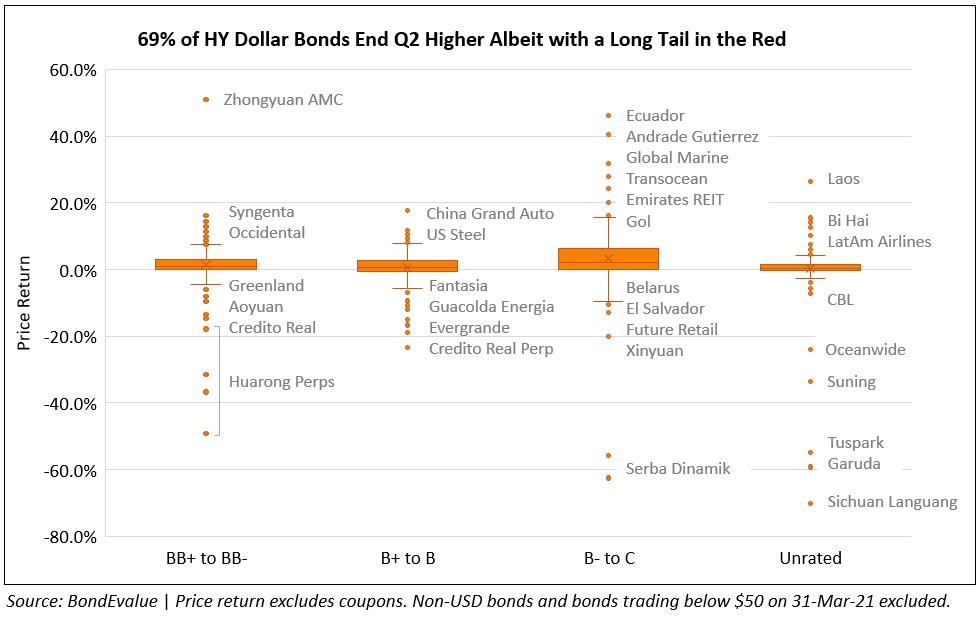 Global corporate dollar issuance volume for Q2 stood at $355bn vs. $439bn for Q1. The quarter’s volumes were down 44% vs. Q2 2020 due to the massive increase in issuances during the same period last year when the pandemic saw central banks cut rates sharply and boost stimulus measures, thereby encouraging corporates to take advantage of lower funding costs, especially in the US. For the month of June, issuance volume stood at $113bn, down 38% vs. last June’s issuance of $183bn, 16% lower than last month’s $134bn. 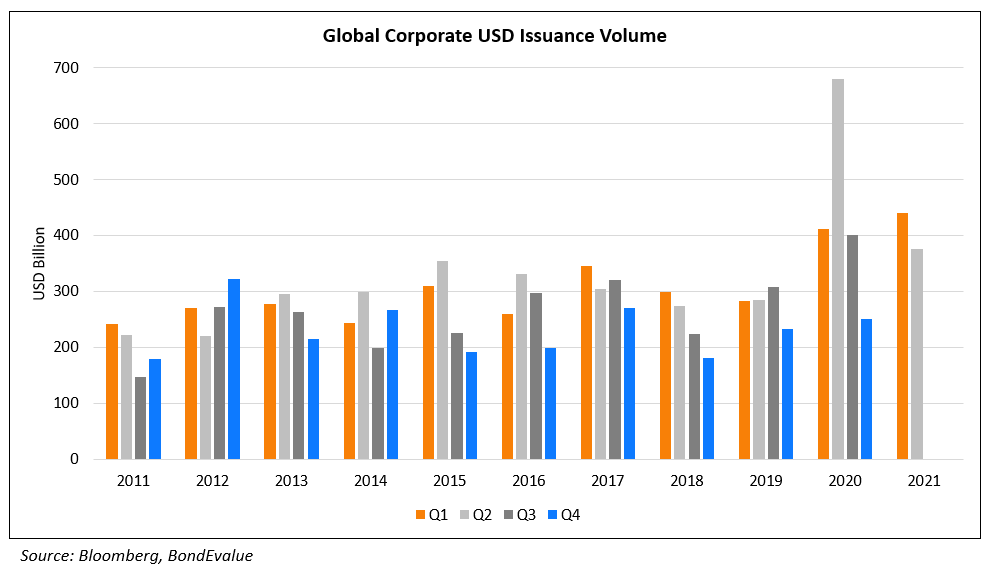 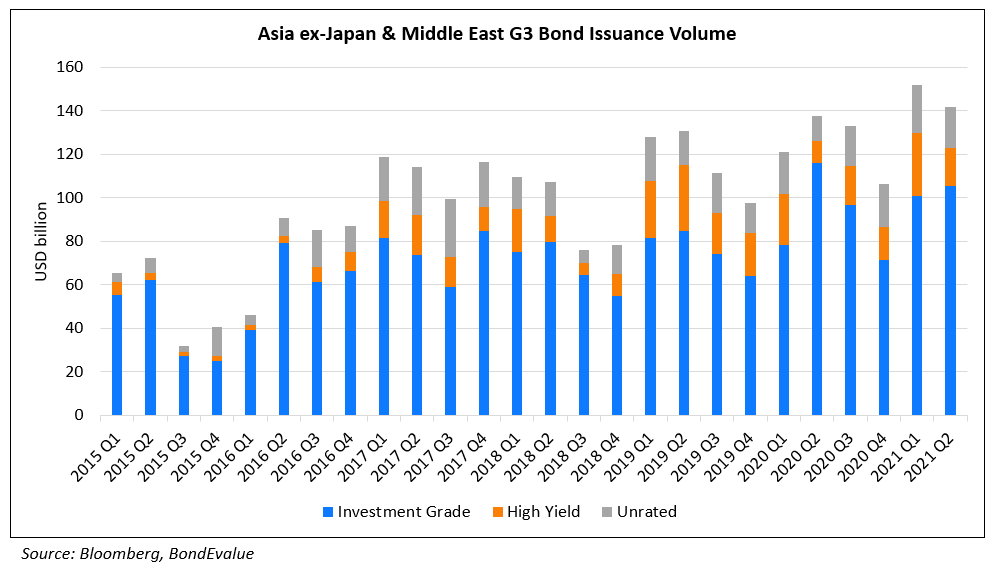 Looking at new bond deals in Q2 across industries, consumer oriented sectors (Retail, Food and Beverage, Travel & Lodging etc.) led the charts with total issuance of over $33bn, of which over 50% came from Amazon’s massive $18.5bn multi-trancher. Sovereigns were second followed by the energy sector while banks came in fourth. For context, banks and financial services dominated Q1, followed by sovereigns and consumer, while energy came in ninth. In terms of returns since issuance, the transportation & logistics sector led the pack with an average price return (ex-coupon) of 4.2% as developed markets have slowly opened up since the pandemic. 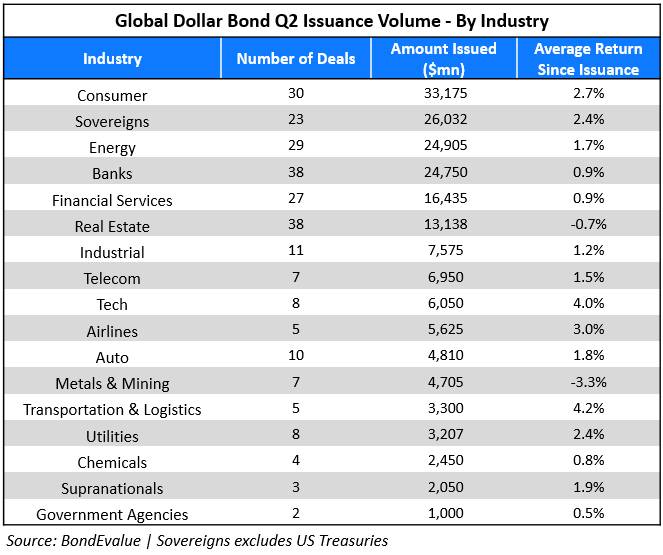 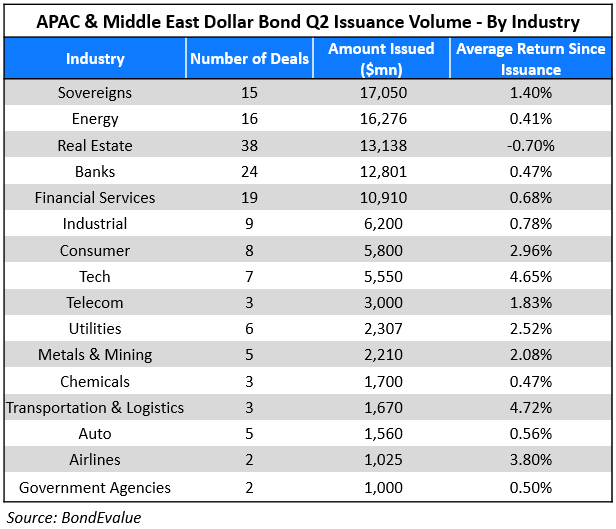 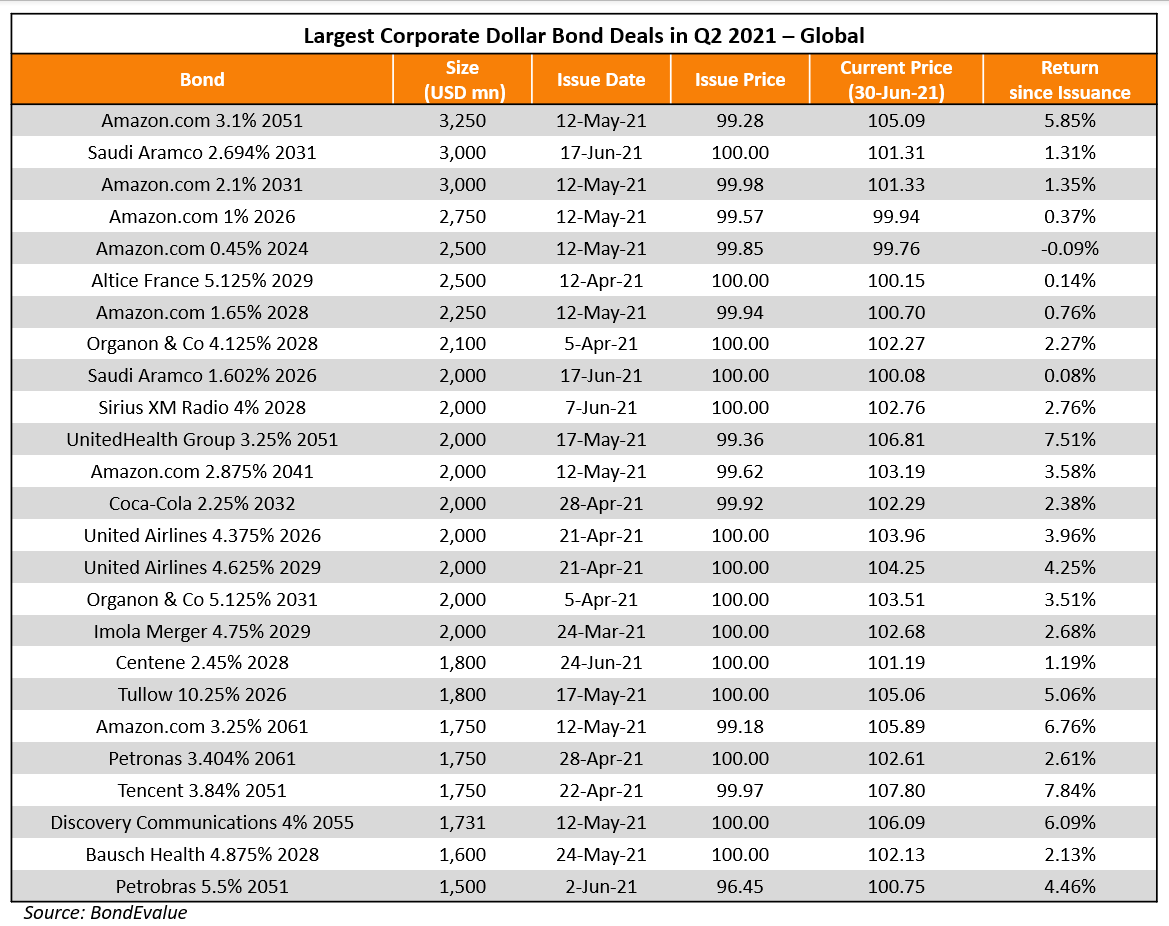 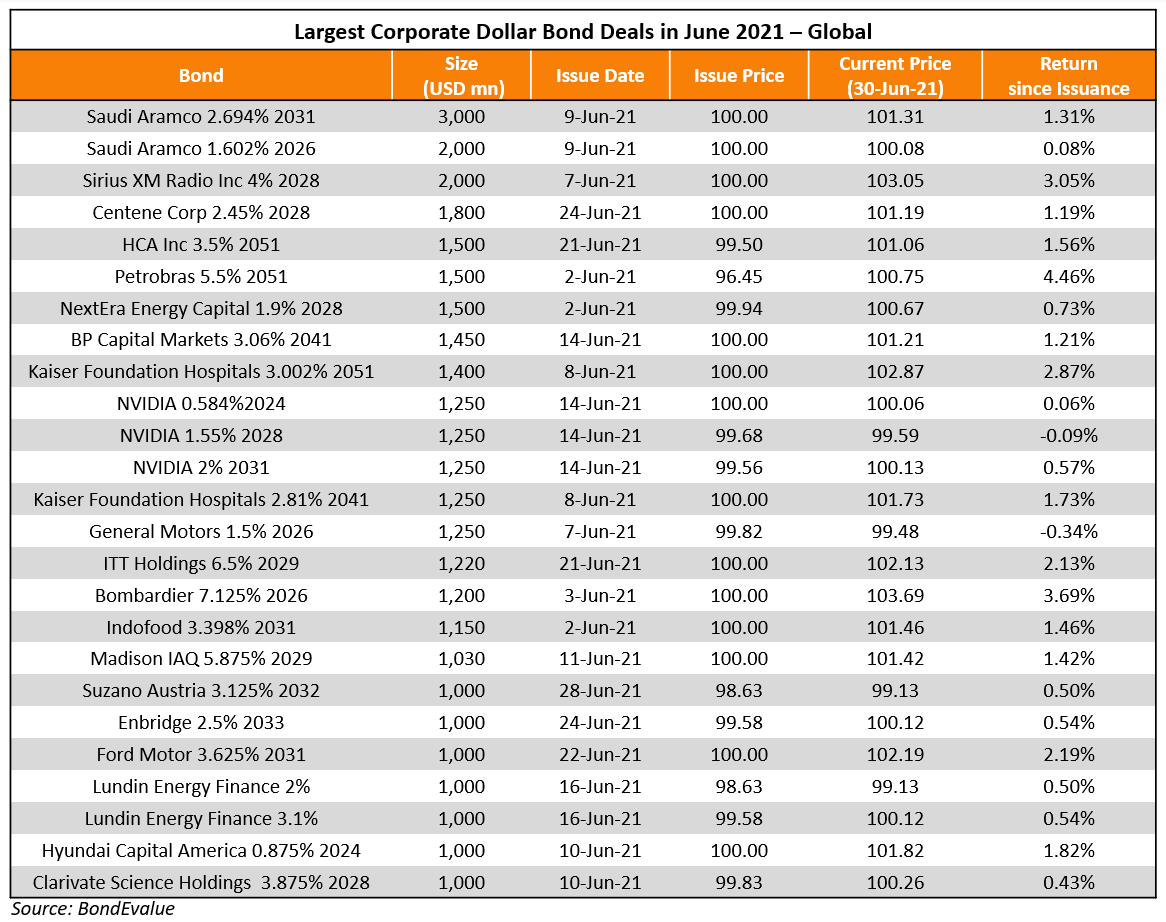 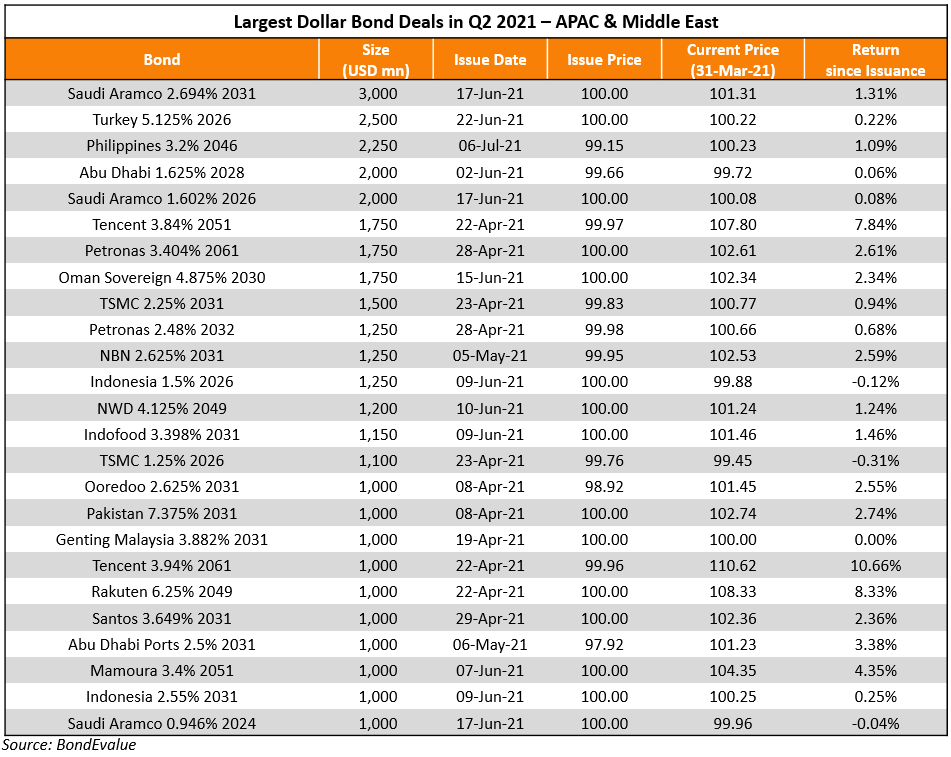 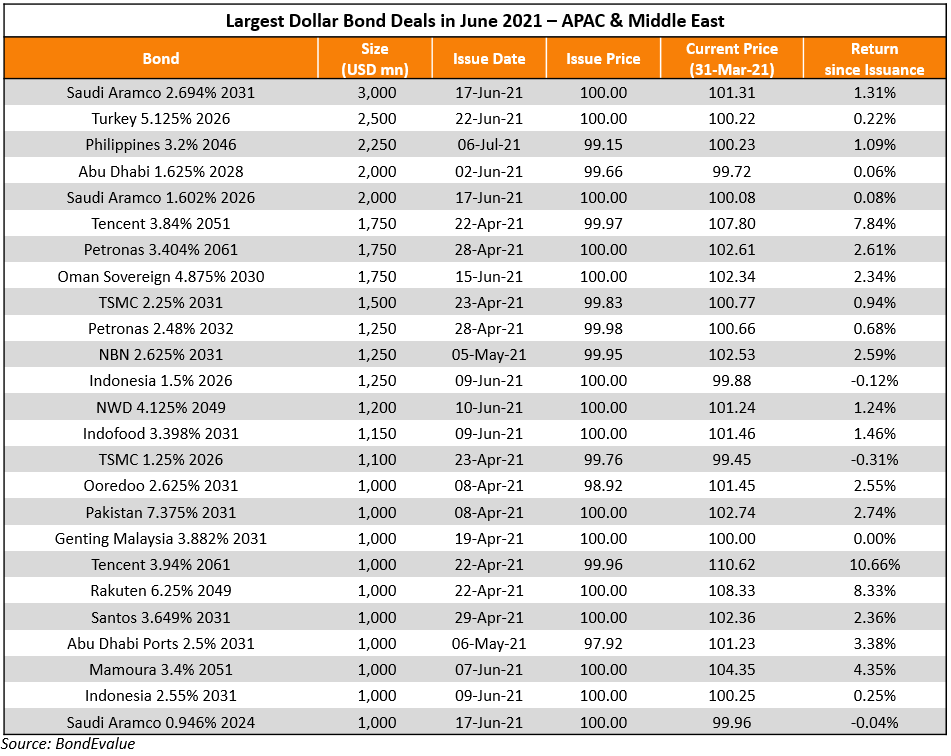 Asian names filled the losers list, led by Sichuan Languang and Serba Dinamik. Sichuan Languang’s bonds plummeted after it was downgraded to B2 by Moody’s and investor concerns remain on the company’s liquidity especially with large maturities in the next 1-1.5 years. Malaysia’s Serba Dinamik had a rough quarter after its initial auditors KPMG flagged concerns about the company’s transactions with its suppliers, with the government also getting involved in the proceedings. KPMG has now resigned as its auditor and several directors have resigned. HNA Group’s 2021s dropped 35 points on a single day in May ever since a $10bn embezzlement came to light – creditors are seeking restructuring now. Garuda’s bonds also dropped as the company is going into restructuring and has now suspended bond payments in order to avoid bankruptcy. Tuspark’s dollar bonds also lost over half its value after missing its coupons on its 2022s – the company is now considering options including selling stake in its assets to repay their 2021s due August.

China Huarong’s woes continued from the previous quarter, although its bonds saw a recovery during the month of June to sit in the gainers list. Several updates have come on the company’s front although there is no confirmation from officials – firstly, sources said that China was considering a $15bn support package for Huarong, post which Moody’s downgraded the company to Baa1. The asset manager had been nudged to sell non-core entities and most recently, China CITIC has been reportedly asked to examine its finances. Huarong has not defaulted yet and has paid coupons and maturing principals on its bonds so far, but speculation is rife on its actual financial position. In the latest update, Huarong has said that its auditors would need more time to complete their audit and if their earnings are not published by end-August, it would be commensurate to a technical default.

On the other side of the continent, Alpha Holdings and Credito Real’s bonds were among the big losers. Alpha’s bonds crashed after the company announced that it expected an impairment of most of the $206mn of receivables and other assets on its balance sheet after an accounting error. They were subsequently downgraded to Caa2 from B3. Credito Real revealed a significant increase in NPLs, revising them up 82% leading to a fall in their bonds, post which Fitch downgraded them to B+ from BB-.

Among the gainers were Ecuador’s bonds where Guillermo Lasso won the presidential election as he plans to balance the budget in four years. Andrade Gutierrez’s USD bonds jumped on the news that local private equity fund IG4 Capital offered BRL 4.6bn ($890mn) to acquire its 14.86% stake in Brazilian infrastructure company CCR, which is controlled by Andrade Gutierrez, Mover and Soares Penido. 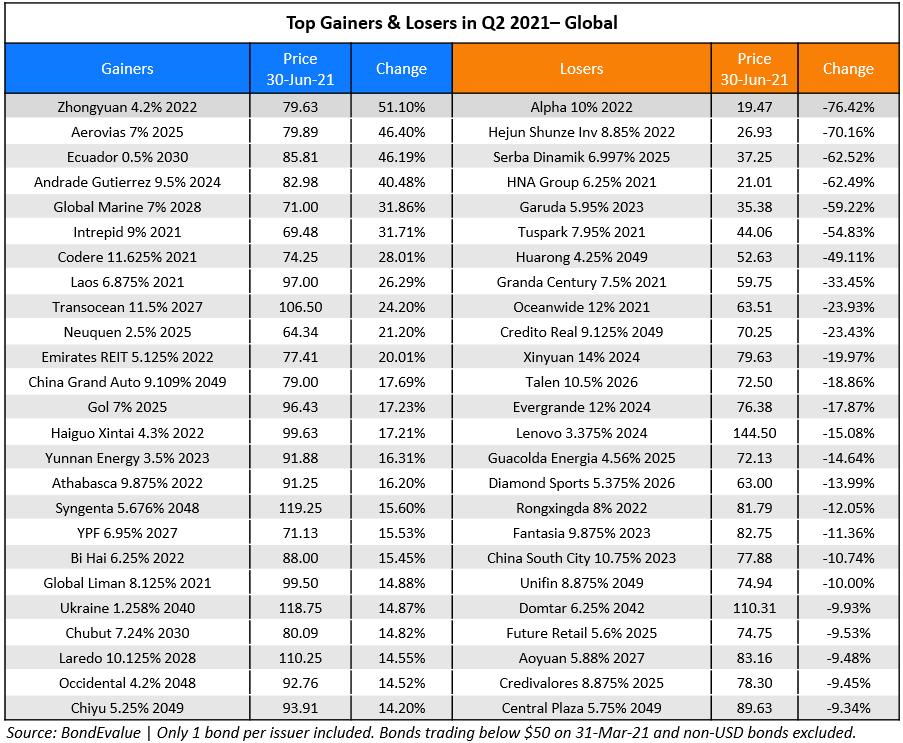 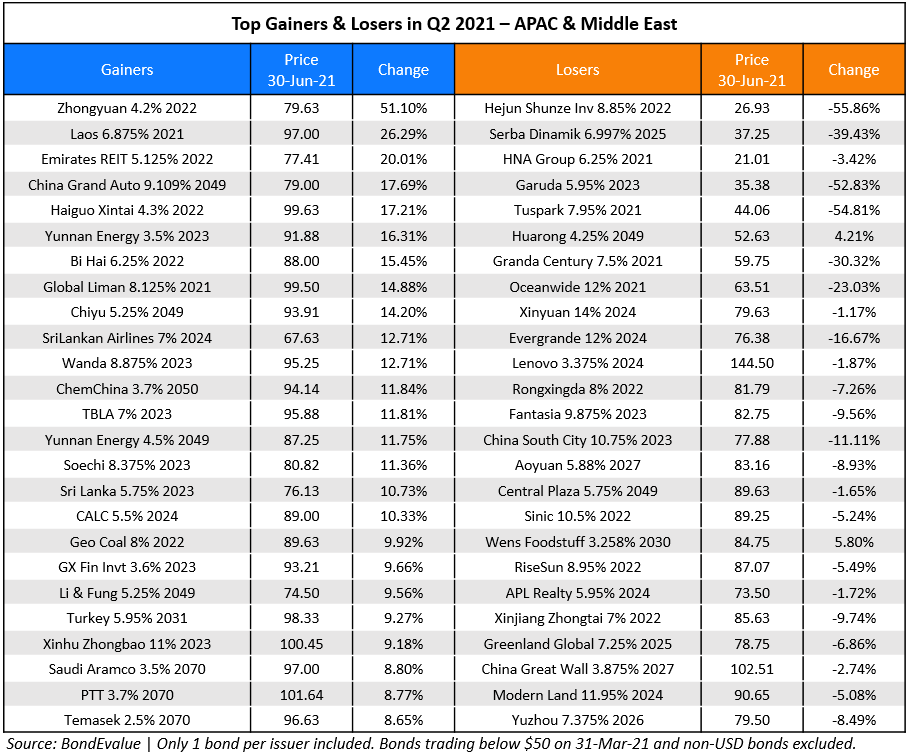 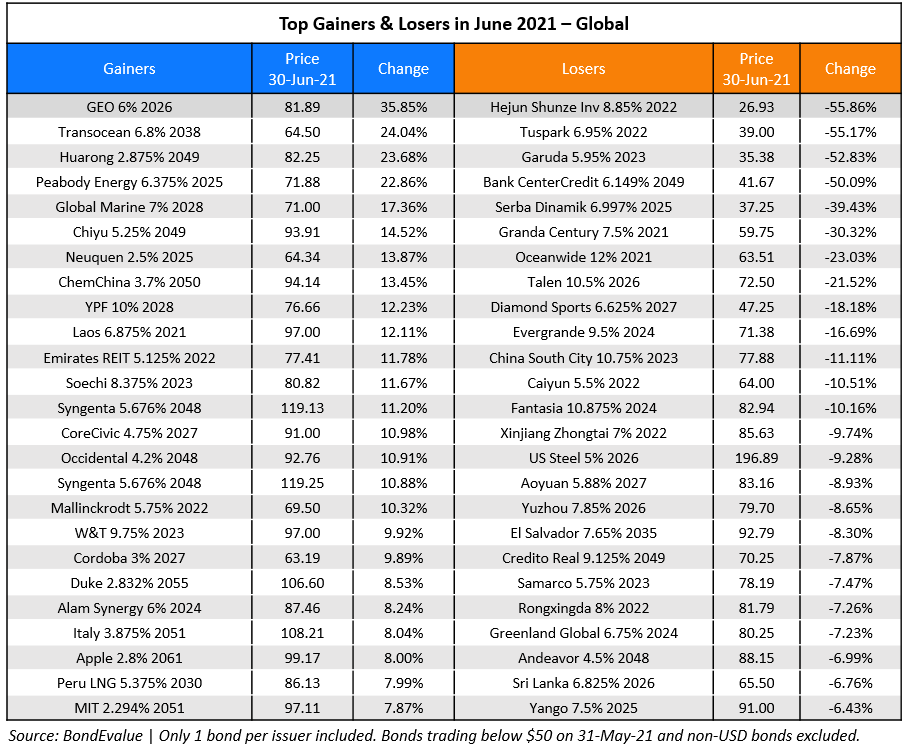 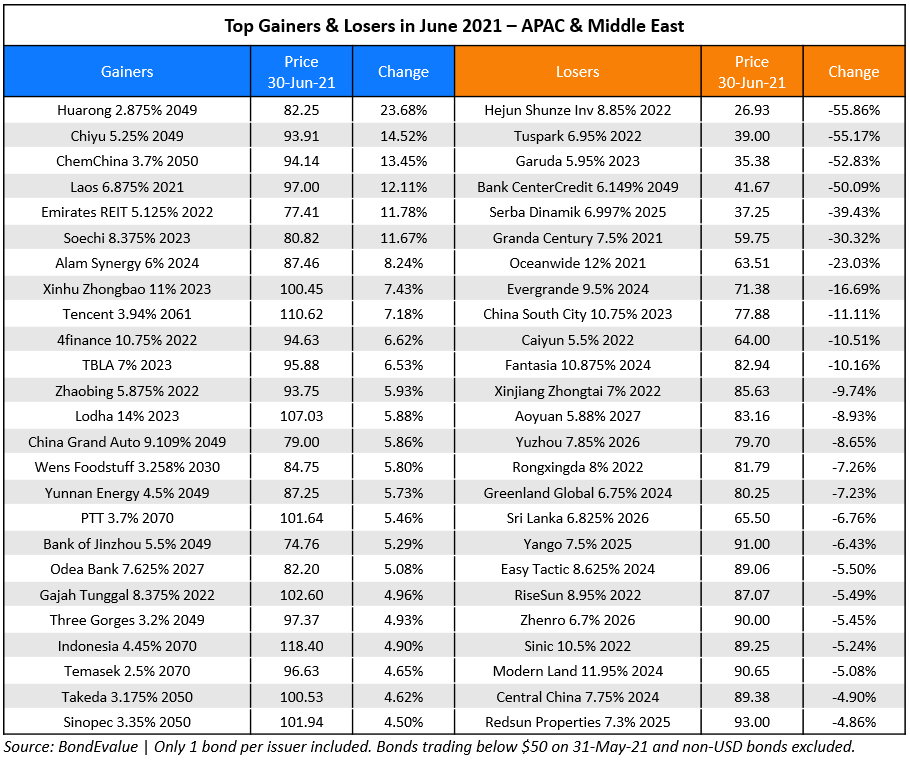