S&P and Nasdaq ended marginally lower by ~0.1% each. Microsoft shares hit a new high as they exceeded earnings expectations with a boost from work-from-home revenues. US 10Y Treasury yields were stable at roughly 1.04% with US Senate Majority Leader Schumer saying that he and fellow Democrats may try to pass much of Biden’s $1.9tn Covid relief bill bypassing filibuster and with a majority vote. Mike Chang, a strategist at Citi said “We think ultimately it’s going to be smaller than the $1.9tn… We have penciled in around $600bn-$1tn. Timing is another issue, not just the size, how long it will take to get the whole thing through”. The IMF lifted its global growth forecast for 2021 to 5.5% – US at 5.1%, China at 8.1% and India at 11.5%. Auto and industrial stocks led the DAX 1.66% higher, while FTSE MIB was up 1.15% on hopes that Italian PM Conte will be able to form a new coalition government after resigning yesterday. The first EU SURE bonds of 2021 raised €14bn through 7Y and 30Y tenors with orders of €83bn, 5.9x issue size. US IG CDS spreads were 0.9bp wider and HY was 3bp wider. EU main CDS spreads tightened 0.9bp and crossover spreads tightened 3.3bp. Momentum in the Asian primary markets continue with 7 new bond issues today. Asia ex-Japan CDS spreads are 0.6bp wider while Asian equities are ~0.1% lower today.

Sign up for the upcoming sessions on Bond Portfolio Optimization & Risk in Perpetual Bonds today, January 27. This session is part of the Bond Traders’ Masterclass across four sessions specially curated for private bond investors and wealth managers to develop a strong fundamental understanding of bonds. The sessions will be conducted by debt capital market bankers with over 40 years of collective experience at premier global banks. Click on the image below to register. 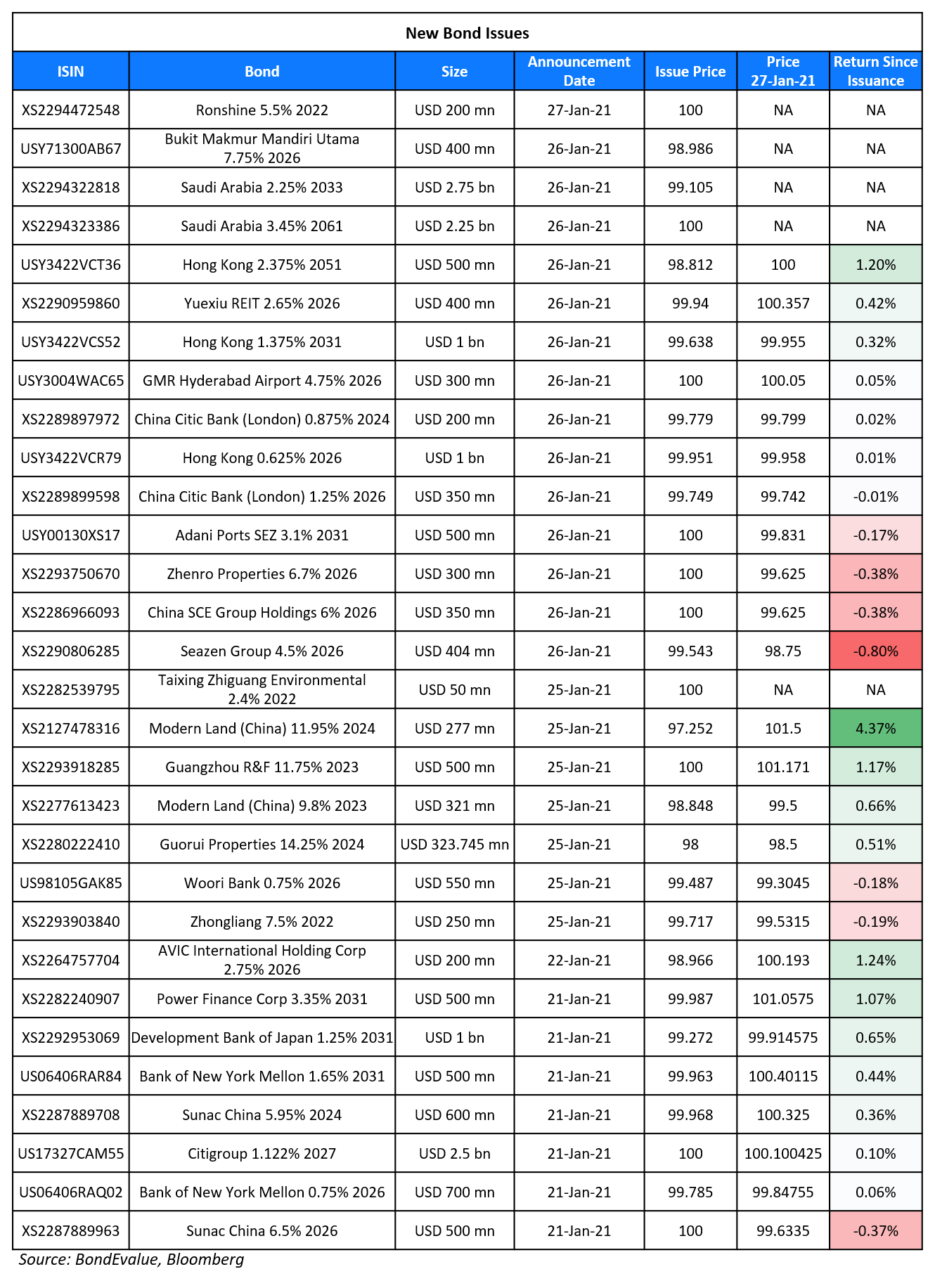 The bonds have expected ratings of AA+/AA- in line with the issuer and received orders of over $15bn, 7x issue size. Proceeds will be used to finance and/or refinance projects eligible under HKSAR’s green bond framework – to provide environmental benefits and support the sustainable development of Hong Kong. Credit Agricole and HSBC were joint green structuring advisers, joint global coordinators and joint lead managers.

GMR Hyderabad Airport raised $300mn via a 5Y bond at a yield of 4.75%, 25bp inside initial guidance of 5% area. The bonds have expected ratings of Ba2/BB+ in line with the issuer and received orders over $1.1bn, 3.7x issue size. Asia took 79%, EMEA 12% and the US 9%. Fund/asset managers bought 86%, banks and private banks 11% and corporates, pension funds and others 3%. The bonds, which are secured against certain immovable assets, receivables and other collateral, have a change of control put at 101 if it leads to a downgrade. As per IFR, the Indian airport’s existing 5.375% 2024s were seen at a bid yield of around 4.7%, meaning the new bonds paid a negative new issue concession of around 10bp after factoring in the longer duration, according to a banker on the deal.

Zhenro Properties raised $300mn via a 5.5Y non-call 3.5Y (5.5NC3.5) green bond at a yield of 6.7%, 50bp inside initial guidance of 7.2% area. The bonds have expected ratings of B2/B+ and received orders over $3bn, 10x issue size. Asia bought 80% of the bonds and EMEA 20%. Fund managers, banks, financial institutions and sovereign wealth funds received a combined 88%, and private banks 12%. Proceeds will be used for debt refinancing and in accordance with the issuer’s green bond framework.

Ronshine China raised $200mn via a 364-day note at a yield of 5.5%. The bonds were unrated and proceeds will be used for refinancing purposes.

China SCE Group Holdings raised $350mn via a 5Y non-call 3Y (5NC3) bond at a yield of 6%, 30bp inside initial guidance of 6.3% area. The bond has an expected rating of B2 and received orders over $2.2bn, 6.3x issue size. Proceeds will be used for debt refinancing.

Bukit Makmur Mandiri Utama raised $400mn via a 5Y non-call 2Y (5NC2) bond at a yield of 8%, 50bp inside initial guidance of 8.5% area. The bonds have expected ratings Ba3/BB- and received orders over $1.15bn, 2.9x issue size. Asia took 64% of the 144A/Reg S bonds, EMEA 20%, and the US 16%. Asset managers and fund managers booked 88%, private banks 6%, financial institutions and banks 3%, and insurers 3%. The deal is the first Indonesian high-yield offering of the year, after textile Sri Rejeki Isman (Sritex) planned but did not proceed with an offering.

Laos pulled its dollar bond deal once again after investors raised concerns about undisclosed breaches in its borrowings. As per IFR, documentation for the planned offering in 2019 stated that Laos was in breach of covenants on certain financing agreements, after it created security over royalties from concessional power projects and shares of power project companies without obtaining permission from the lenders. The sovereign had planned to use the proceeds of the bond deal to pre-pay the loan facilities, but warned that the non-compliance with the loans could be considered a breach of covenants and result in cross-defaults on its other debt. The sovereign is expected to add the relevant disclosures to its bond documents before relaunching the deal for the third time.

This refers to a provision that allows a bond issuer the right to call their bonds before maturity if certain specified events occur as specified in the offering statement. These events could range from natural disasters or catastrophes, cancelled projects, to other unusual one-time occurrences.

“The only thing that matters to markets is global fiscal and monetary policy. Markets are priced as though coronavirus doesn’t matter any more.”

Jeff Thomas, head of western US listings and capital markets at Nasdaq

“When you put all that capital into the system, it’s got to go somewhere,” he said. Rapidly rising stock market valuations have enticed companies to pivot from private to public markets much sooner”

“We are now in an environment where global interest rates are at very low levels, and there are trillions of bonds with negative yields out there. There is a lot of liquidity out there looking for a home, and even if the yield does come off, the yield pickup in Malaysia would still be attractive enough”

“There were some really significant underlying problems with normal. Our ability to respond to the economic challenges we have with monetary policy alone is much more limited because of the enormity of what’s already been done”

“We think now it is a good time to invest in Turkey. The policies we have seen were in the right direction, and as long as Turkey follows through these policies, it can be a beneficiary of the favorable external environment for emerging markets”

“Turkey has started to do the right things recently. It has a beaten-up currency and a very high carry. At a time when yields are negative globally in many nations, the central bank is hiking interest rates, promises reforms and this makes us excited about the Turkish market”

“We are not constructive yet. So much damage has been done in terms of central-bank credibility, foreign investor confidence and valuation of the currency in recent years. We need more consistency in monetary and fiscal policy to regain confidence in the market.” 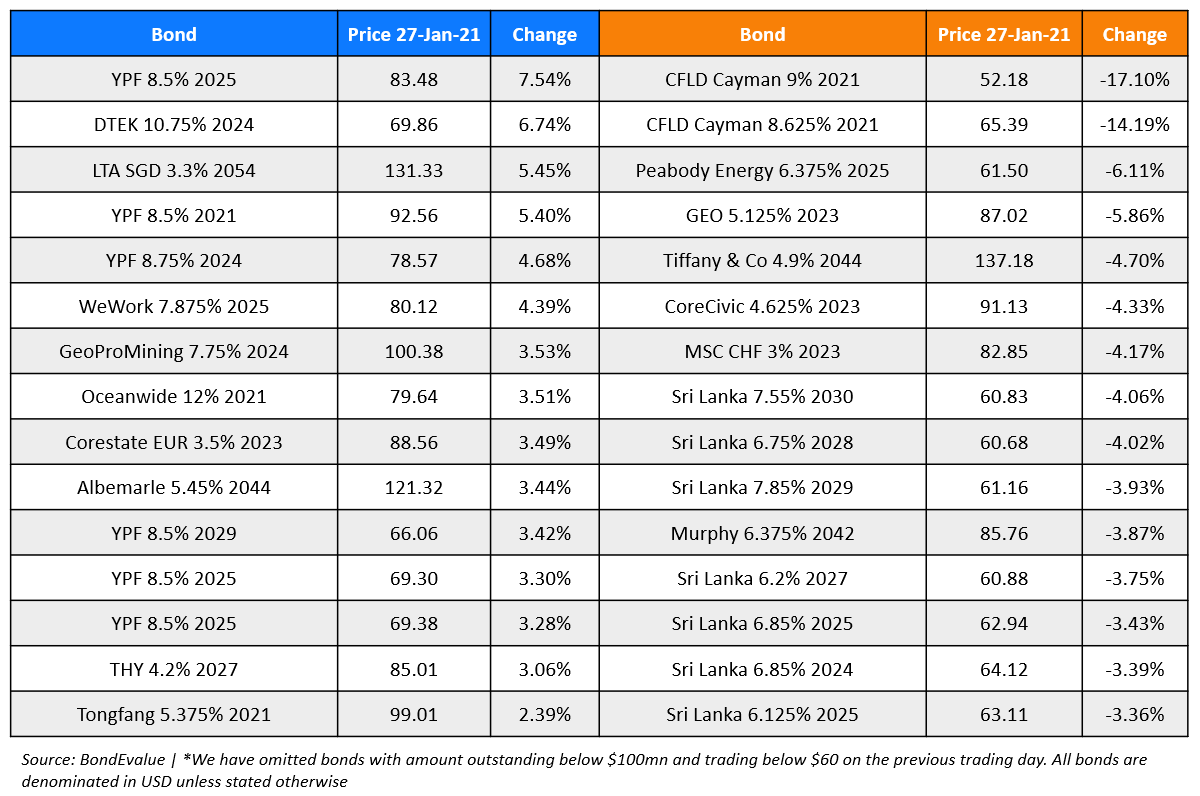 Slovenia Rushes Back to Market With East Europe’s Longest Bonds