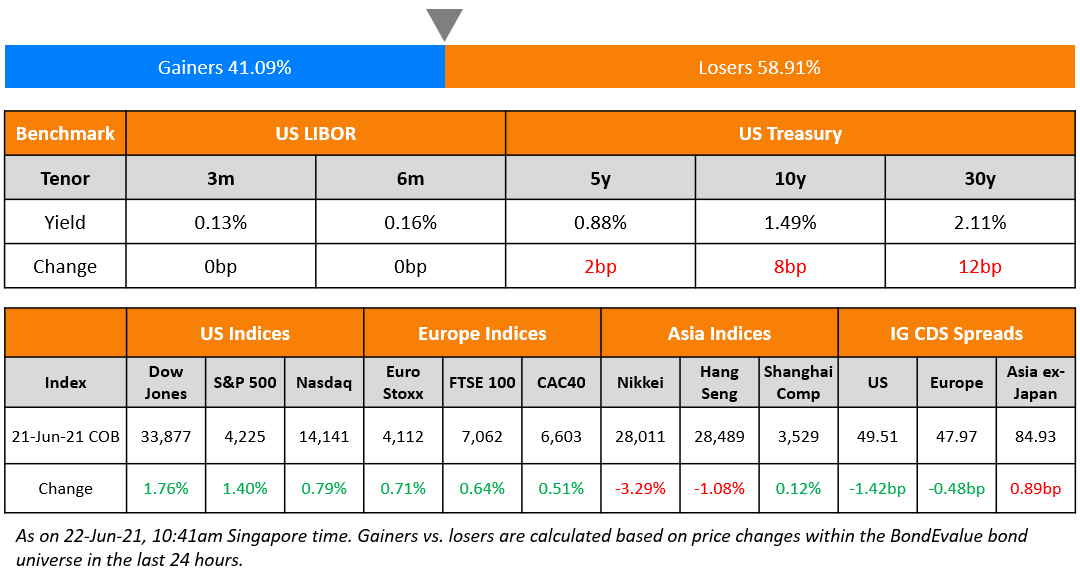 Markets rallied sharply on Monday after a disappointing last week. S&P and Nasdaq reversed Friday’s losses and were up 1.4% and 0.8% respectively. Energy was up 4.3%, followed by Financials and Industrials that rose more than 2%. The yield curve steepened with the US 10Y Treasury yields rising 8bp to 1.49%, rebounding from a 3M low of 1.35%. European markets were also upbeat and the FTSE and DAX closed 0.6% and 1% higher. US IG and HY CDS spreads tightened 1.4bp and 6.5bp respectively. EU main and crossover CDS tightened 0.5bp and 2.4bp respectively. Saudi TASI was up 0.6% while Abu Dhabi’s ADX was down 0.5%. Brazil’s Bovespa closed 0.7% up. Asian markets were broadly positive – Nikkei and Singapore’s STI were up 2% and 0.3% respectively while Shanghai and HSI were largely flat. Asia ex-Japan CDS spreads were 0.9bp wider. It’s a busy day at the Asian primary markets with seven new deals including CapitaLand, BOCOM, CCB and GLP.

New to the BEV App? BondEvalue will be conducting a complimentary session on Navigating The Bond Markets by Leveraging the BEV App tomorrow, June 23, 2021. This session is aimed at helping bond investors in tracking their investments using the BondEvalue App. 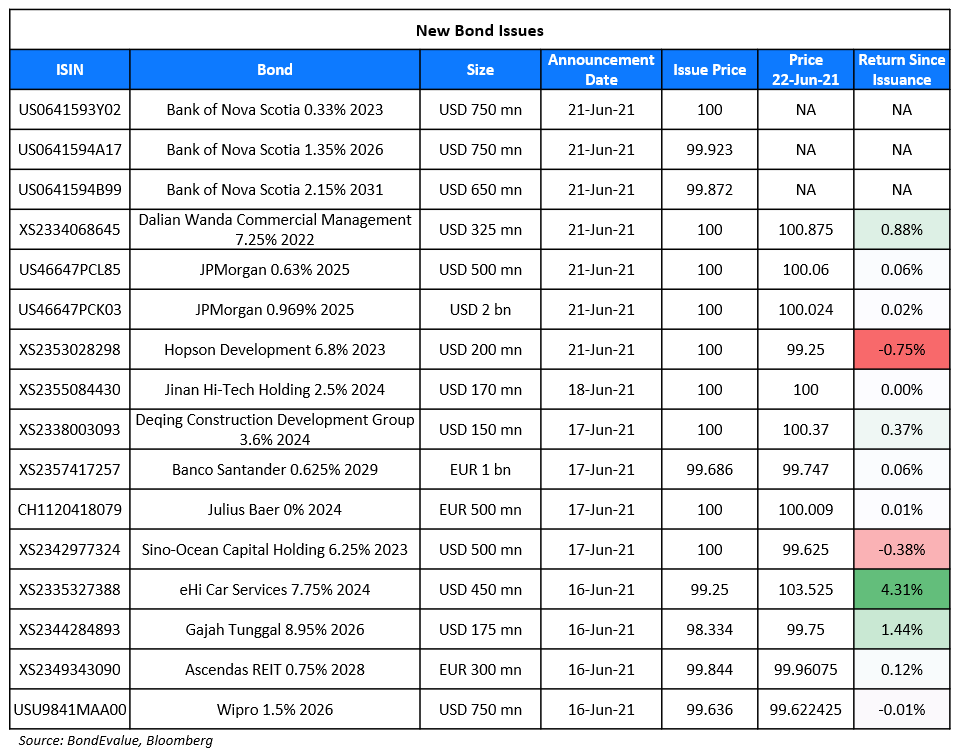 Scotiabank raised $2.15bn via a three-rancher. It raised:

The bonds have expected ratings of A2/A-. Proceeds will be used for general corporate purposes.

Hopson Development raised $200mn via a 2.5Y bond at a yield of 6.8%, 30bp inside initial guidance of 7.1% area. The bonds are rated B+ and received orders over $630mn, 3.2x issue size. The offer has a 25-cent rebate for private bank orders. Proceeds will be used to refinance existing debt.

Exchange Traded Funds (ETFs) are investment products that track a particular sector, asset class or index but can be traded on the exchange. While mutual funds may also track these assets, since ETFs are traded on an exchange, investors are aware of prices on a real-time basis, can buy or sell their ETFs with minimal delay and have less limitations on minimum investments. This makes it a friendlier option to retail investors with expense ratios also generally lower than that of mutual funds. FT notes that net flows into inflation-linked ETFs have risen to a record as investors try to protect against rising inflation risks.

On the view that inflation should subside toward Fed’s 2% target
Jerome Powell, Federal Reserve Chairman
“Inflation has increased notably in recent months.” “As these transitory supply effects abate, inflation is expected to drop back toward our longer-run goal.” “Job gains should pick up in coming months as vaccinations rise, easing some of the pandemic-related factors currently weighing them down.”
John Williams, New York Fed President
“It goes without saying that there is a great deal of uncertainty about the inflation outlook, and I will be watching the data closely.”
On US inflation unlikely to have significant spillover to Euro area – Christine Lagarde, European Central Bank President
“The outlook for the economy is indeed brightening as the pandemic situation improves.” “Underlying price pressures are expected to increase somewhat this year owing to temporary supply constraints and the recovery in domestic demand, but are likely to remain subdued.” “I don’t think that we can actually compare the U.S. situation and the euro situation,” she said. “They’re in a different situation in terms of the cycle, they’re in a different situation in terms of inflation, and they’re in a different situation in terms of inflation expectations.” “We made good progress during the retreat,” she said. “Since all the issues covered in the seminars are highly interdependent, the remaining discussions will focus on deriving their joint implications for the monetary policy strategy.”

“Creating optionality for the committee will be really useful and that will be part of the taper debate as we think about how much signaling we are doing about future rate policy.” “What’s the time frame for that and what’s the magnitude of that?” he said. “I think that’s a healthy debate to have.” “I don’t think that this is an environment where you can just go on automatic pilot,” he said. “There’s a lot of volatility in the macroeconomic data, so we are probably going to have to be a little bit more ready than we were in 2014 to possibly make adjustments to our taper strategy.”
Robert Kaplan, Dallas Fed President
“I’ve been more of a fan of doing some things maybe to take our foot gently off the accelerator sooner rather than later so that we can manage these risks” and make it more likely that the Fed will be able to “avoid having to press the brakes down the road,” Kaplan said. “What you are seeing … is monetary policymakers simply reacting to the dramatically improved economic outlook.”
John Williams, New York Fed President
“It’s clear that the economy is improving at a rapid rate, and the medium-term outlook is very good.” “But the data and conditions have not progressed enough for the FOMC to shift its monetary policy stance of strong support for the economic recovery.”
On the risk of US overheating and inflation rising even after Fed’s policy shift
Ray Dalio, founder of Bridgewater Associates
“It’s easy to say that the Fed should tighten, and I think that they should.” “But I think you’ll see a very sensitive market, and a very sensitive economy because the duration of assets has gone very, very long. Just the slightest touching on those brakes has the effect of hurting markets because of where they’re priced, and also passing through to the economy.” “There’s a massive amount of liquidity around, and it’s being thrown around so that it’s a difficult environment for those returns to be justified,” Dalio said. “I think we’re building kind of a bubble.”
Lawrence Summers, Former Treasury Secretary
“I welcome the Fed’s limited efforts to mark its views toward reality and a growing awareness that this overheating is likely to necessitate a monetary policy response.” “People should not just modify their forecasts but should think about what their errors of thinking were that led them to be so far off in their forecasts.” “Much of the consensus of professional forecasters in February was that we would have inflation just above 2% this year.” “We’ve already had more inflation than that in the first five months of the year.” 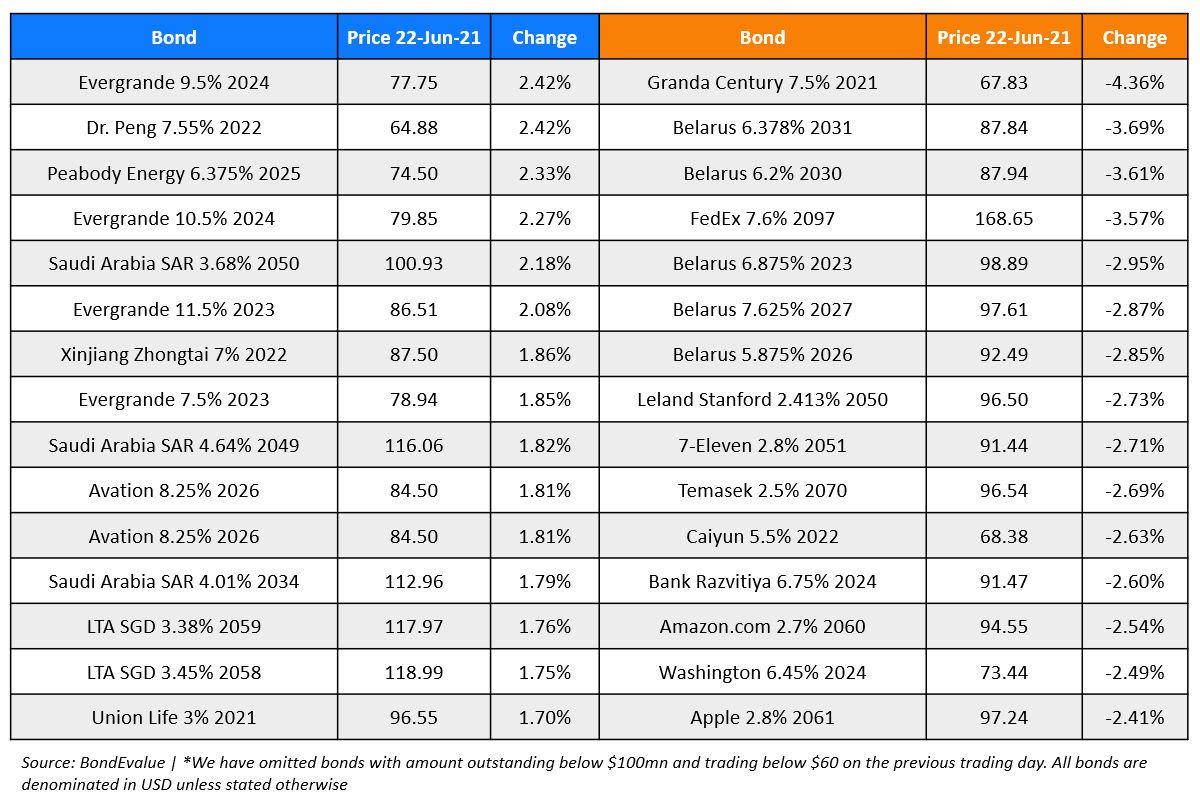