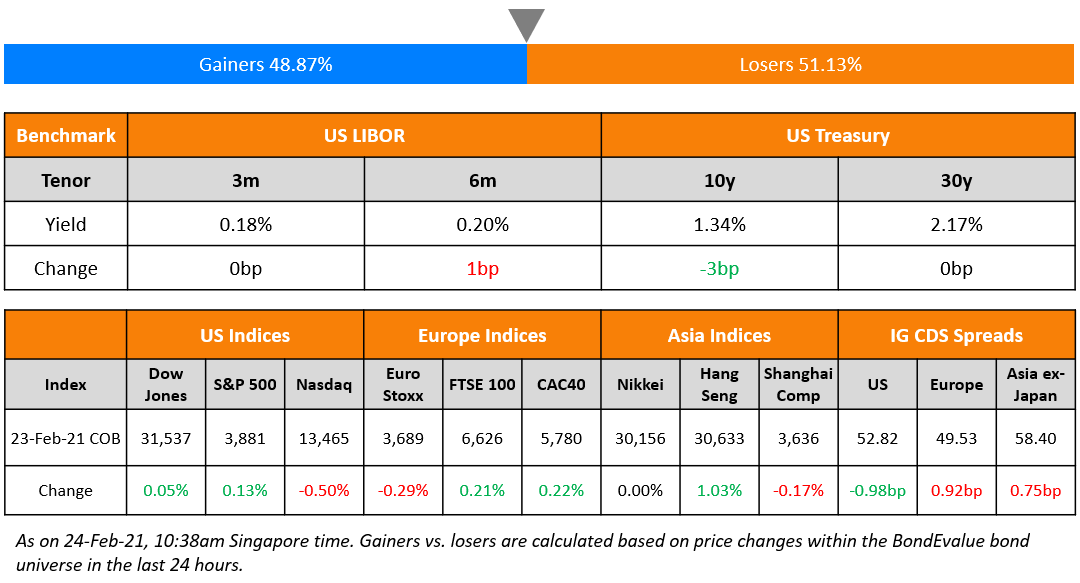 US equity indices started lower with the Nasdaq falling ~4% in early trading before recovering most of the down move towards close. S&P ended 0.1% higher while Nasdaq was 0.5% lower. Tesla closed 2.2% lower and Bitcoin, in which Tesla recently invested $1.5bn, was down 11%. US 10Y Treasury yields eased 3bp to 1.34%. Fed Chair Powell said in his testimony that the Fed is not close to tapering their QE, inflation is soft and that they would continue buying bonds even as the economy recovers. Meanwhile in Europe, FTSE and CAC 40 rose 0.2% and 0.2%, while the DAX and FTSEMIB fell 0.6% and 0.3%. US IG CDS spreads were 1bp tighter and HY was 5.9bp tighter. EU main CDS spreads widened 0.9bp and crossover spreads widened 4.7bp. Asian equity markets have opened mixed today while Asia ex-Japan CDS spreads are 0.7bp wider with seven new dollar deals this morning, the busiest day at the Asian primary markets in three weeks.

Register before the end of the month for the Bond Traders’ Masterclasses scheduled for late-March and early-April to get a 10% + 25% discount on the bundle package of five modules. Click on the image below to register. 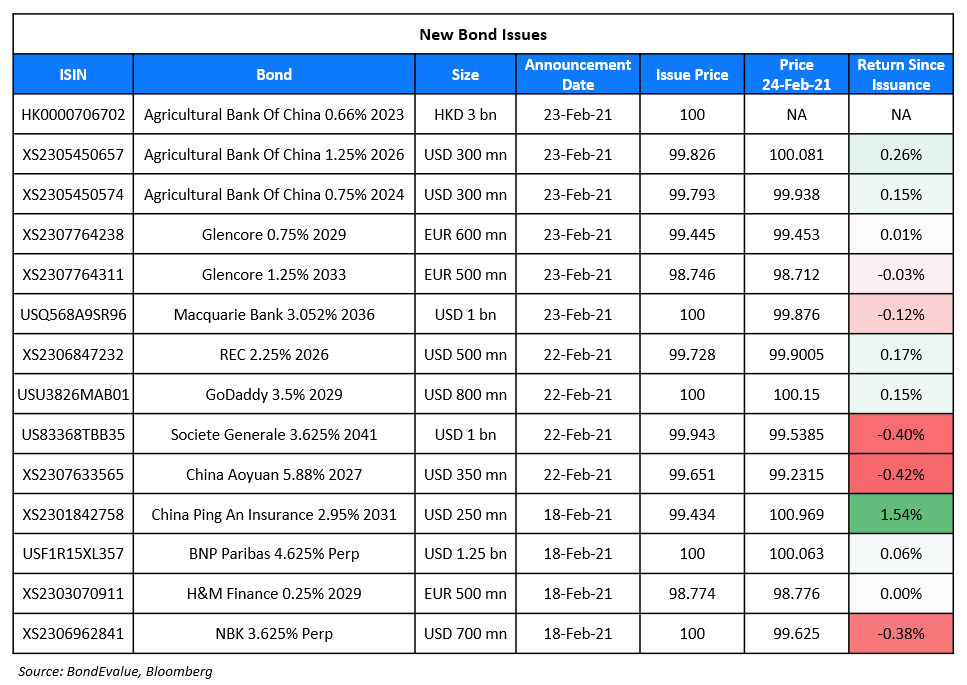 Agricultural Bank of China raised $600mn via a dual tranche offering. It raised:

ESR Cayman raised S$200mn via a PerpNC5 bond at a yield of 5.65%, 22.5bp inside initial guidance of 5.875% area. IFR notes that the bonds had healthy demand and thus the size was revised up from S$150mn. If not called in 2026, the coupon will reset to the prevailing SOR + initial credit spread of 473bp + a step-up of 200bp. Private banks will receive a 25 cent concession. Proceeds will be used to refinance debt, fund potential acquisition and investment projects and meet working capital and general corporate needs. Final pricing was slightly above fair value as per OCBC credit analyst Ezien Hoo had placed fair value at a yield to call of 5.4%–5.6%.

“The economy is a long way from our employment and inflation goals, and it is likely to take some time for substantial further progress to be achieved,” he said. “In a way, it’s a statement on confidence on the part of markets that we will have a robust and ultimately complete recovery,” he said. “The economic dislocation has upended many lives and created great uncertainty about the future.” “I really do not expect that we’ll be in a situation where inflation rises to troubling levels,” Powell said.

In a note by Roberto Perli and Benson Durham, Cornerstone Macro analysts

The chairman “gave absolutely no indication that the Fed is thinking about changing its very dovish policy stance,” they wrote

On benchmark Treasury yields dipping after Powell’s comment on the need for support for the economy – Julia Coronado, president of analysis firm Macropolicy Perspectives

“His basic stance was the same and it provided some reassurance to the bond market,” said Coronado. “In Powell’s even-keeled way he said, ‘Our job is far from over. We’re going to be here buying Treasuries for some time.'”

“As a long-time distressed asset investor in China, I can see that creditors are clearly becoming more aggressive in defense of their financial interests. Regulators have been generally supportive as they attempt to improve the efficiency of credit markets.”

As a result, many borrowers are facing hard choices as regulators turn away from bailouts and investors clamor for more rule-based, less political enforcement options, Silvers added.

On the opportunities in the burgeoning China bond haven trade – Stephen Jen, CEO of Eurizon SLJ Capital and inventor of dollar-smile framework

“In risk-off episodes in the past 20 years, Chinese bonds have reliably rallied,” Jen wrote. There are “very few safe-haven assets that carry any meaningful yield. If we look around the world, all yields have collapsed, making the 3.0-3.5% annual return on sovereign debt in China that much more interesting.”

“Given the demographic trend and the need for European/British savers to earn a meaningful risk-adjusted return on their savings, there will continue to be significant demand from this part of the world for higher-yielding investments elsewhere,” Jen said.

According to strategists at BCA Research

“Bolsonaro’s decision to replace Petrobras’ CEO is dashing hopes of Brazil’s return to economic orthodoxy,” they said. “The central bank is likely to lift the policy rate in response… which would keep government borrowing costs above
the nominal GDP growth rate,” they said. “A violation of the fiscal spending rule would weigh further on the real amid higher inflation expectations, and bonds are likely to underperform as rates rise.”

“One reason for Latam FX struggles may be that markets expect that an inflation overshoot in the U.S. would spill over to other economies, and would be harder to contain in Latam, where central bank credibility is perceived to be weaker,” said Gofshteyn.

“The yields will probably be particularly low, sub 1%, and it makes sense for them to try and diversify their funding a little,” said Briggs. “Things have been marginally weaker in emerging-market credit over the last few days, but the timing isn’t shocking, and the big surge we’ve seen in oil prices should add further support to the credit.” 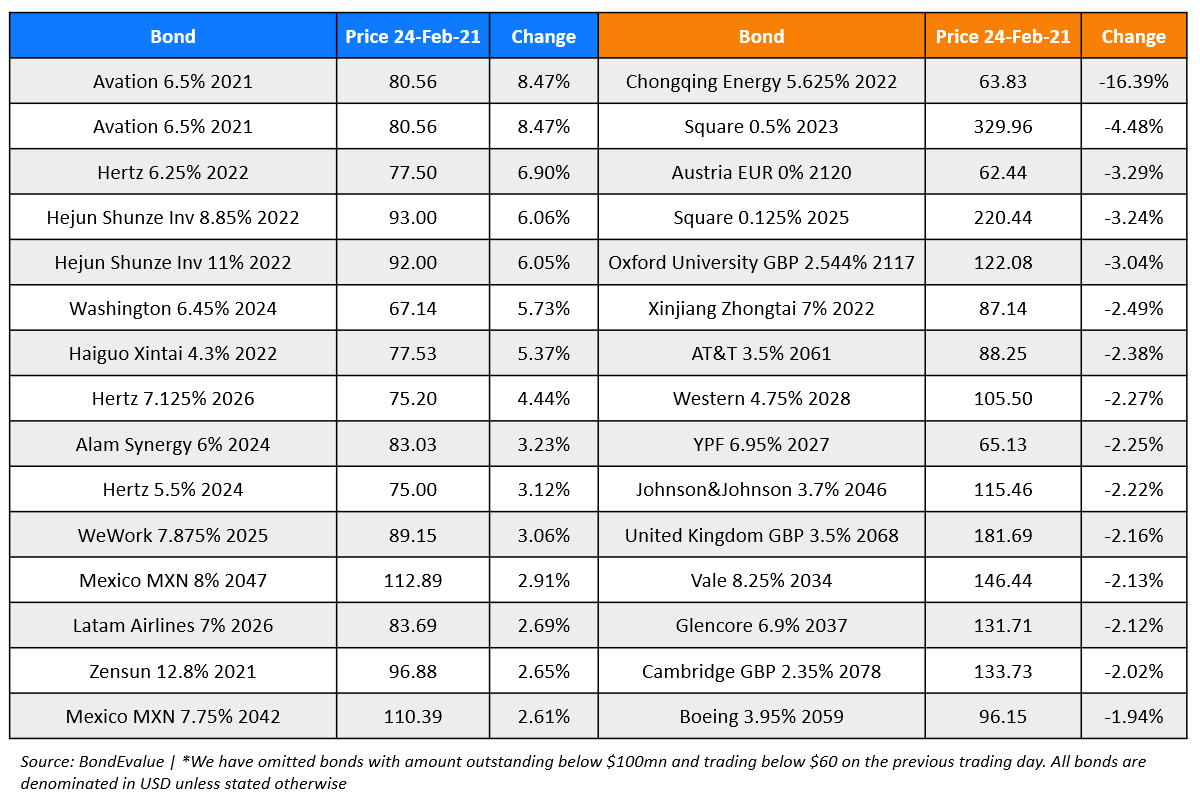