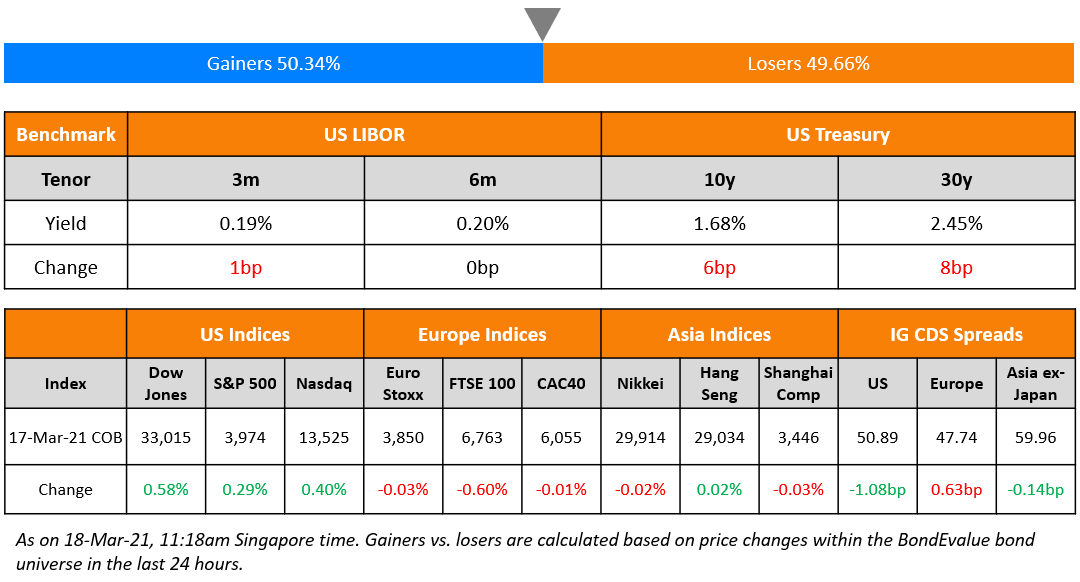 S&P gained 0.3% while the Nasdaq rose 0.4% with the Fed taking a dovish stance. The Fed kept rates unchanged with the dot plot seeing a change – 7 officials see a rate hike in 2023 vs. 5 last December while 4 officials see a hike possibility next year vs. none in December. While the FOMC bettered its expectations for growth, unemployment and inflation, the recent inflation pick-up was termed ‘transient’ by Fed chair Jay Powell. US 10Y Treasury yields have continued their march higher today by 6bp to 1.68%. US IG CDS spreads were 1.1bp tighter and HY was 5.9bp tighter. EU main CDS spreads were 0.6bp wider and crossover spreads widened 2.1bp. Asian equity markets have opened higher 0.8%-1% and Asia ex-Japan CDS spreads are tighter 0.1bp. Asian primary markets are having another busy day with seven new dollar deals today. 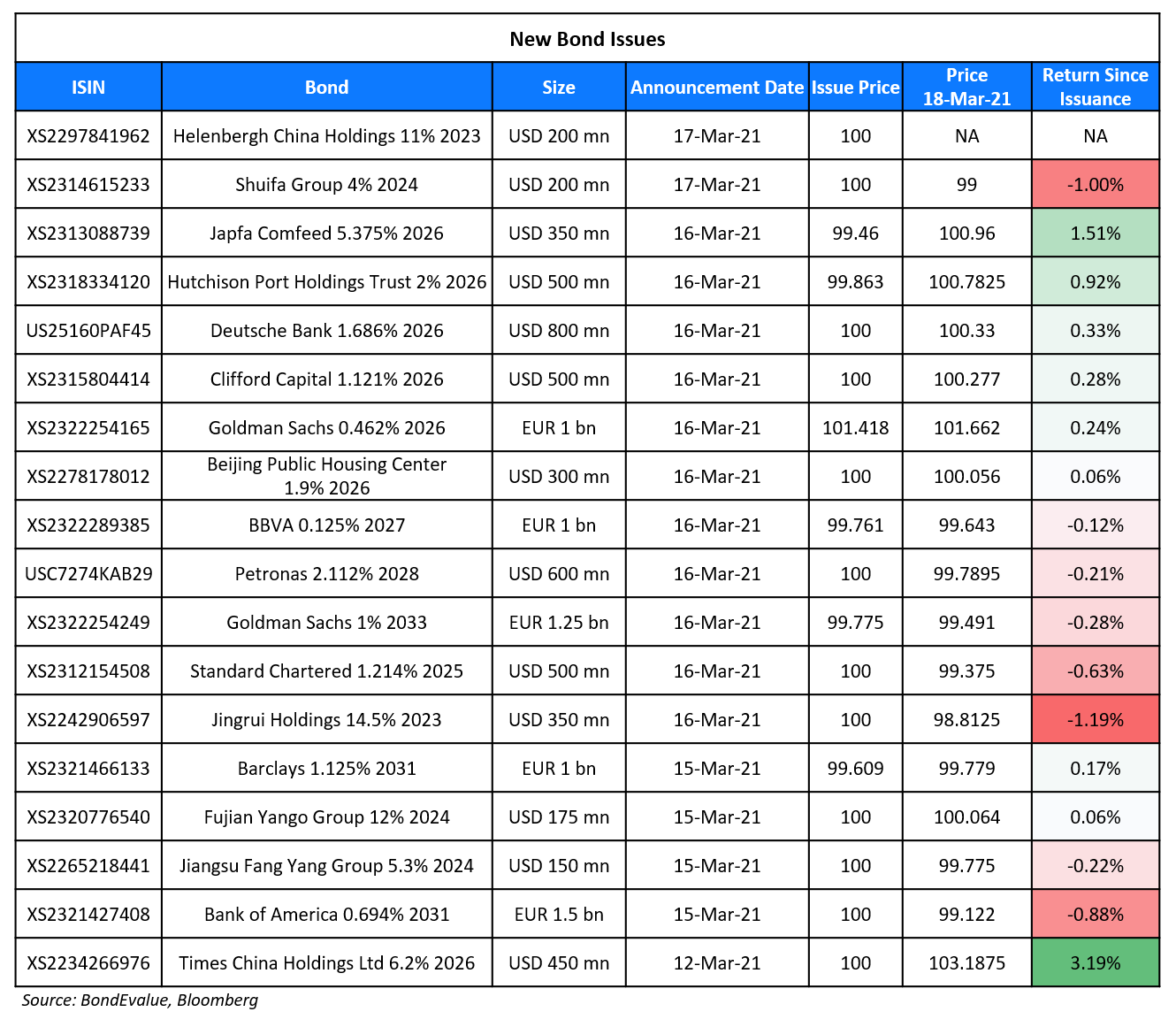 Shuifa Group raised $200mn via a 3Y green bond at a yield of 4%, 25bp inside initial guidance of 4.25% area. The bonds have expected ratings of Baa1 by Moody’s and received orders over $700mn, 3.5x issue size. The bonds will be issued by wholly-owned subsidiary Shuifa International Holdings (BVI) and guaranteed by Shuifa Group. Proceeds will be used for project construction and debt refinancing in accordance with the group’s green bond framework.

Helenbergh China Holdings raised $200mn via a 2Y bond at a yield of 11%, 50bp inside initial guidance of 11.5% area. The bonds have expected ratings of B3 by Moody’s. The property developer plans to use the proceeds for offshore debt refinancing.

A Sukuk is a sharia-compliant fixed income instrument that essentially works similar to bonds. In a Sukuk, key differentiators vs. conventional bonds are:

Sharia compliance broadly implies that any profits derived from these funding arrangements must be derived from commercial risk-taking and trading only; that interest income is prohibited on lending activities and; that the assets must be halal. Saudi mall operator Arabian Centres is planning a $500mn sukuk issuance over the coming days/weeks.

“I thought this was one of the best press conferences we’ve seen from Powell,” said Caron.“He got up there and kind of rocked it, and said: ‘This is what we’re doing. This is what’s going on. I said patient and I meant it,’” Caron said. “Wow, mission accomplished.” “The last time he spoke 10-year yields were beginning to rise to 1.50%,” Caron said. “Everybody expected him to talk things down, and he didn’t do it.”

“I think the market was looking at it for a few directions, just trying to understand to the extent of which the Fed would upgrade its view, based on an additional $2 trillion in stimulus,” said McCann. “What the Fed has not done is not blink.”

“He’s a maestro himself. He is because of what he’s managed to say… ‘we want inflation higher. We want higher growth…we want all these things and we want rates low too,’” Faranello said. “Without doing anything — think about it — he got it.”

“The biggest thing that Powell has said is the Fed is not fearful of the inflation boogeyman,” Arone said. “He described inflation this year as ‘transient’ not transitory as everyone is saying. And then he sees it falling,” Arone added. “As a result you’re seeing rates fall and the Nasdaq shoot up.”

On sovereign rating cuts coming to those who ignore climate change

In a statement by Matthew Agarwala, environmental economist at Cambridge’s Bennett Institute for Public Policy

“Investors are holding government bonds with ever-longer maturities,” Mr Kraemer said. “The agencies’ short time horizon increasingly leaves investors without a reliable yardstick for credit exposures that can extend up to a hundred years.”

“The expensive valuations of stocks has made traders extremely sensitive to bad news these days,” said Wong. “Also, lots of recent government measures do not affect bond market that much, such as the clampdown on technology giants, but those hurt heavyweight stocks directly.”

“Frontloading the policy normalization process is a stronger and quicker way of stabilizing financial markets, supporting the real and minimizing the risk of inflation ending the year above target,” said Rostagno.

“For the next meeting, unless there is a significant change in inflation projections or in the balance of risks, the Committee foresees the continuation of the partial normalization process with another adjustment, of the same magnitude, in the degree of monetary stimulus,” they said.

“The 30-year is a step back into normality in terms of the global government bond markets,” said Sherani.

Konstantin Veit, portfolio manager at Pimco
“All boats have been lifted by the ECB,” said Veit. “There has been some upward pressure on yields but it is not obvious that all fundamentals pushing yields down have disappeared at this stage.”

“It really shows the level of support from the ECB that is enabling governments to issue at the moment on favourable terms.” “After last week’s ECB meeting there is more firepower on the way, so it is a perfect time for Greece to issue,” said Moghadam.

“Greek bonds have generally recovered from the losses we have seen in the financial crisis and the eurozone sovereign crisis,” he said.

Sergey Sudakov, head of DCM, central and eastern Europe, at BNP Paribas
“Essentially we have just been waiting for a bit of stability and we got that this week. Greece is by no means unique and has been impacted by recent rates moves alongside other sovereigns,” said Sudakov. 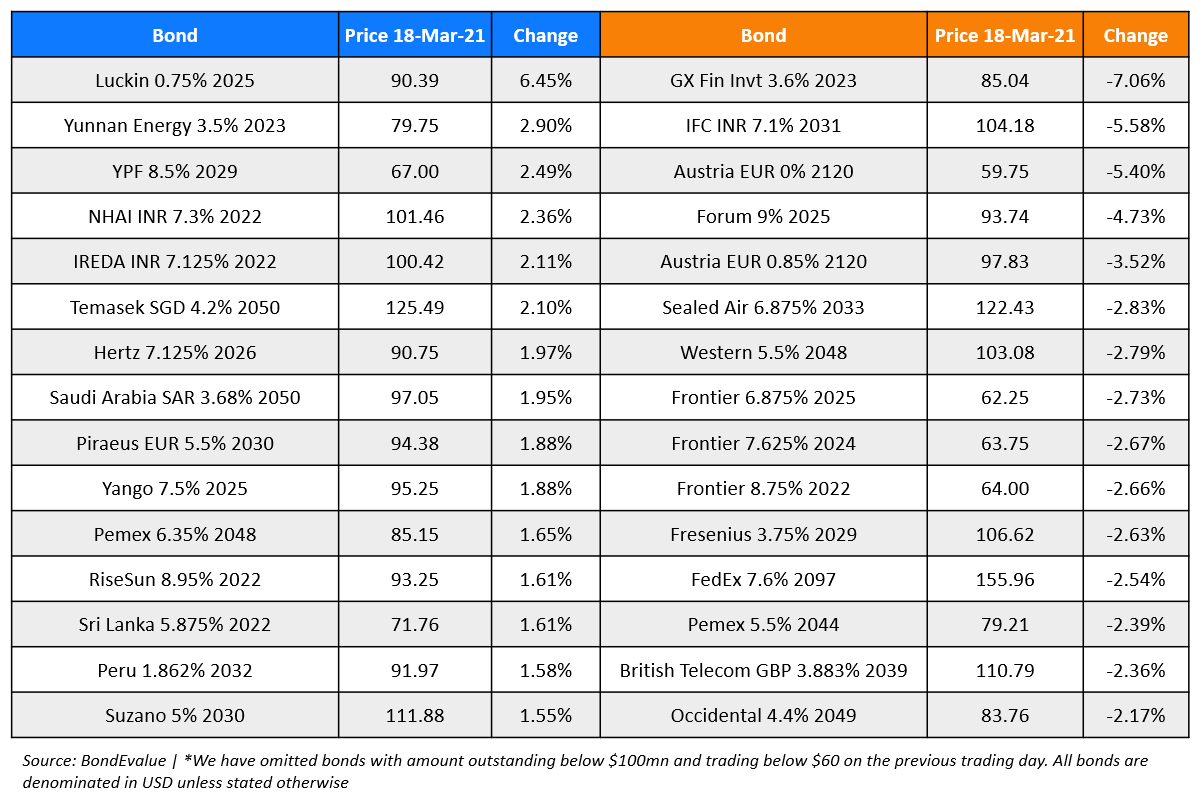