70% of Bonds Delivered a Negative Price Return in September 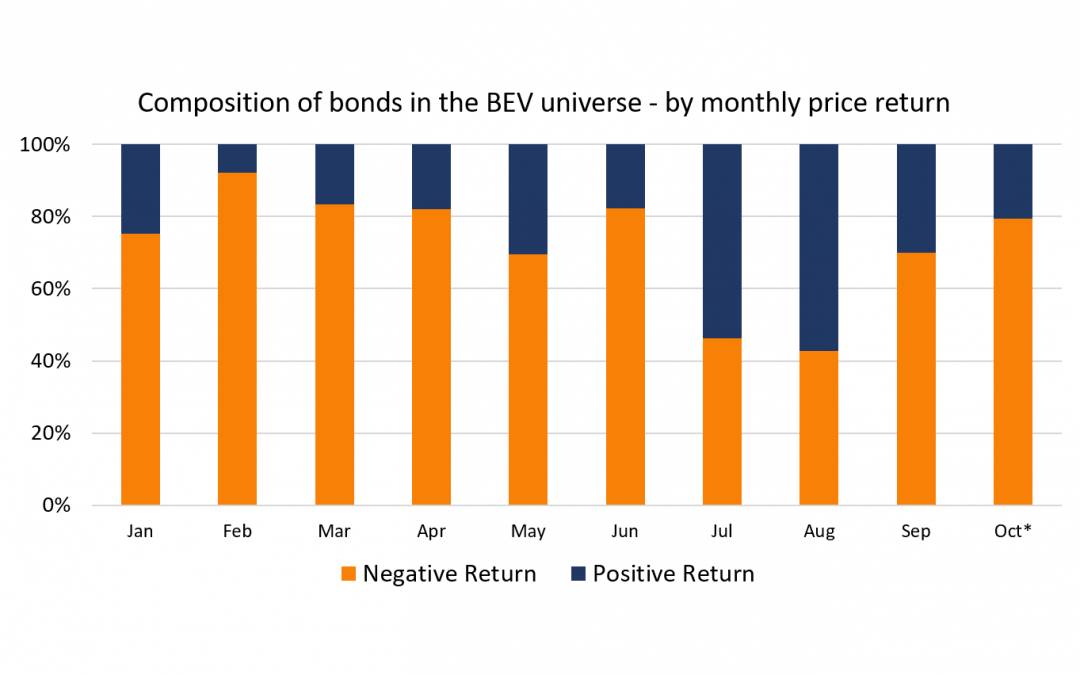 The US economy continued to strengthen in September leading the Fed to hike rates for the third time this year to an upper bound of 2.25%. The Fed rate hike, coupled with strong employment data for the month of September, pushed the 10-year Treasury yield to a seven-year high of 3.23%.

Nonfarm payrolls for September came in at 134k, below estimates of 185k. However, the unemployment rate came in strong at 3.7%, the lowest level since Dec-1969, while the jobs count for July and August were revised upwards from 147k to 165k and 201k to 270k, respectively.

Given the inverse relationship between bond yields and prices, an increase in yields lead to a fall in prices. To see how bonds within the BEV universe have moved through 2018, we calculated the percentage of bonds with positive/negative price return – by month.

The negative price return has translated into a mark-to-market loss for all but two months in 2018 so far, as seen from the chart below. 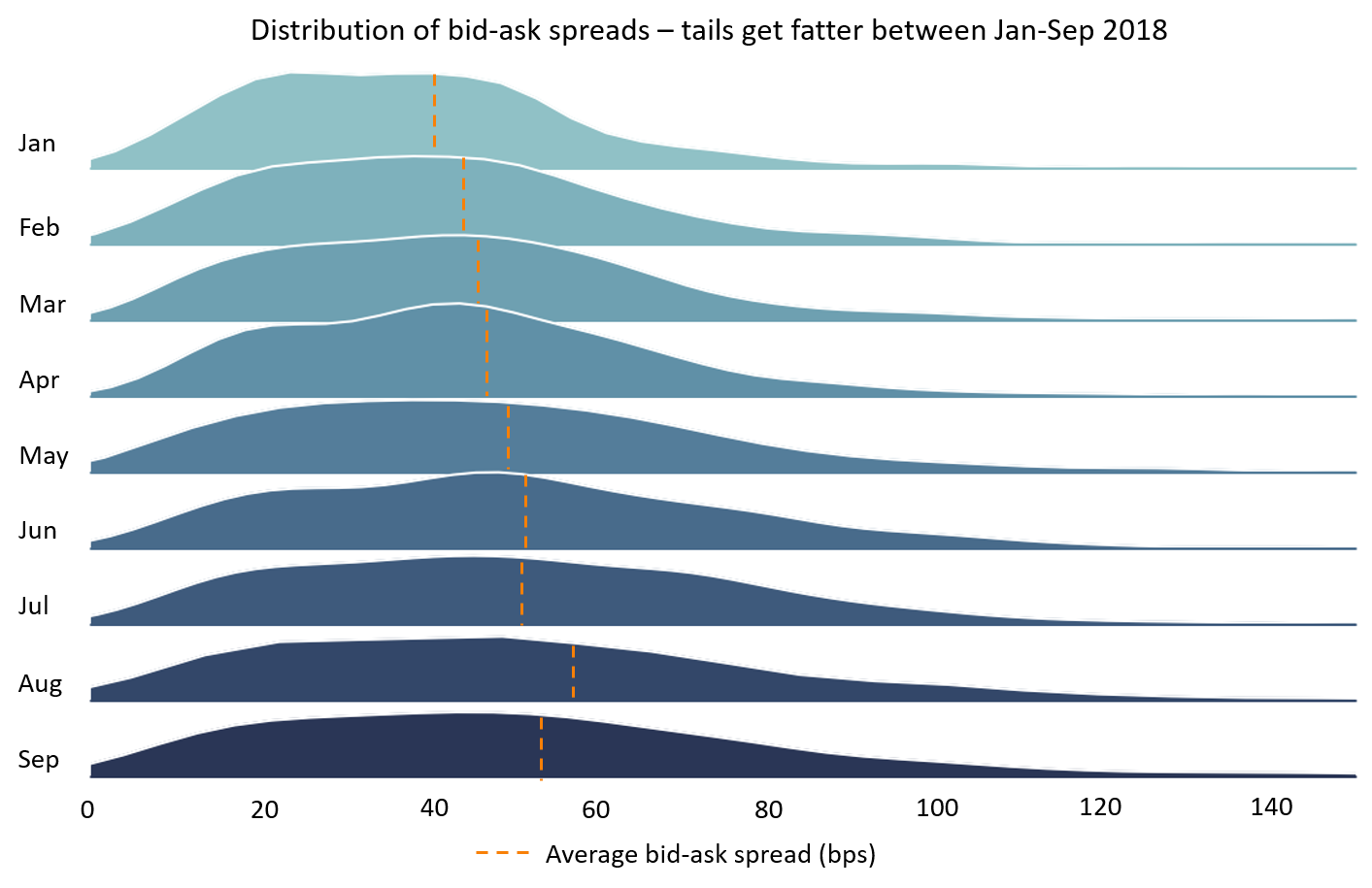 Turkish bonds recovered impressively in September after a sharp slide in August. The Turkish central bank raised its benchmark interest rate by 625 basis points to 24% on 13-Sep, in a bid to salvage the falling lira and prove its independence from the government. The central bank’s decision was well received by bond investors as Turkish bonds rallied by an average of 10% in September. 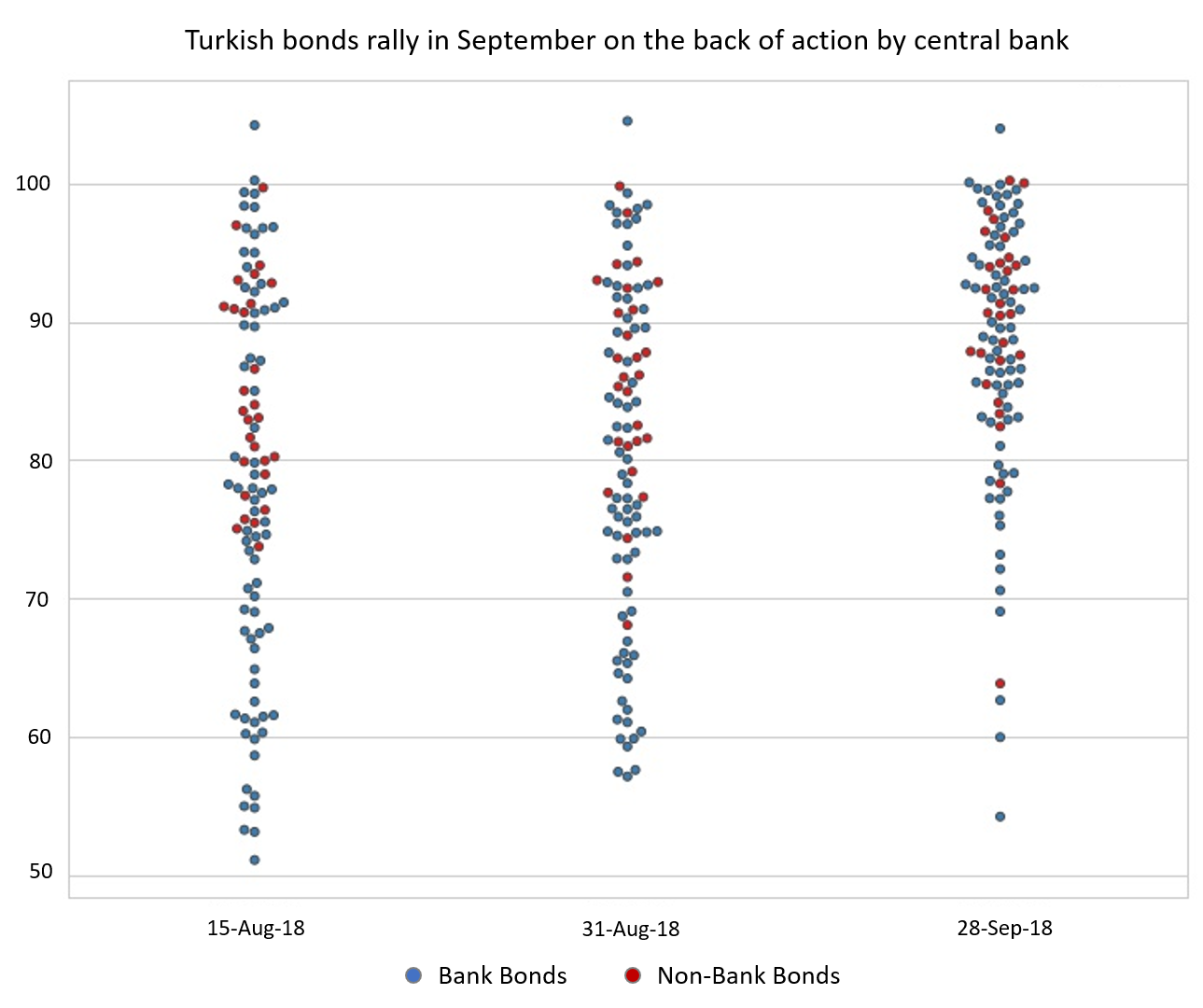 The Turkish central bank exhibited a hawkish tone in its policy meeting press release: “Inflation expectations, pricing behavior, lagged impact of recent monetary policy decisions, contribution of fiscal policy to the rebalancing process, and other factors affecting inflation will be closely monitored and, if needed, further monetary tightening will be delivered.”

Turkish bank bonds recovered most prominently, with some bonds of Yapi Kredi Bank and Akbank rallying by ~25-30% in September. Turkish bank bonds were the worst-affected by the selloff in August, as documented in our newsletter last month. 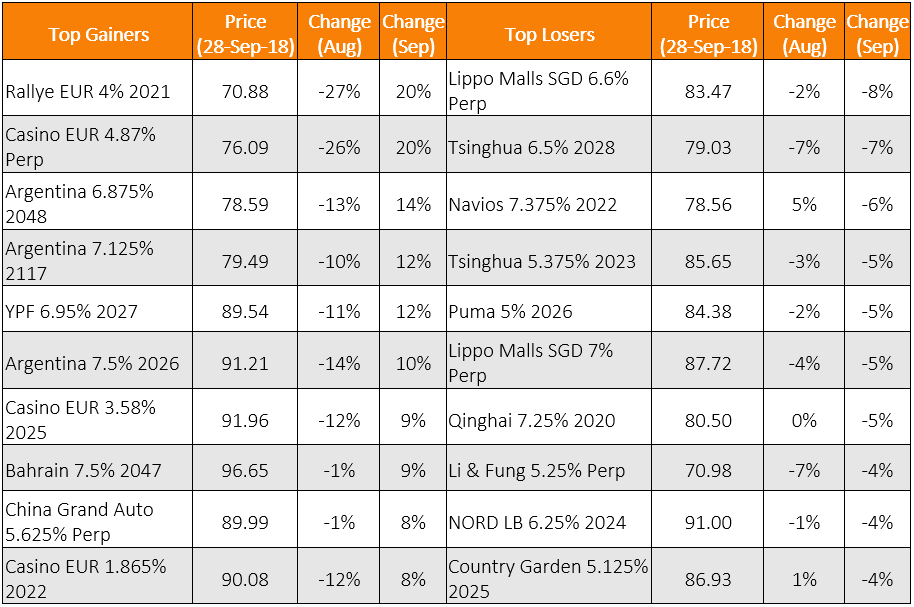 Source: BondEvalue | *We have omitted Turkish bonds and bonds trading below $70 on 28-Sep-18 as illiquidity distorts the change in prices

As seen from the table above, Turkish bonds were not the only bonds to recover in September. Argentine bonds recovered on news of the government negotiating a USD 50 billion credit line from the IMF. The IMF showed strong support to Argentina by increasing its bailout package to a record USD 57 billion – the biggest loan package from the IMF ever.

The central bank took serious measures on its part by hiking interest rates to 60% – the highest in the world – in end August and holding rates at that level in its September policy meeting.

Bonds of French supermarket chain Casino and its parent Rallye rallied in September on news of it securing a EUR 500 million credit line from five banks. This new credit line will help the company repay its upcoming bond maturities. Casino has also pledged to sell assets worth EUR 1.5 billion in a bid to cut down its mounting debt pile.

In its rating action press release, Moody’s stated the following:

Moody’s expectation of negative operating cash flows at the holding company level is driven by (1) lackluster marketing sales of inventories; (2) a decline in asset management fees from the sale of Bowsprit Capital Corporation, manager of First REIT Limited; (3) a decline in dividend cash flows from its Singapore-listed real estate investment trusts owing to its reduced stake in First REIT and weaker dividends per unit from Lippo Malls Indonesia Retail Trust; as well as (4) higher interest expense on its US dollar debt as a result of the weaker Indonesian rupiah against the US dollar and higher cost of debt. 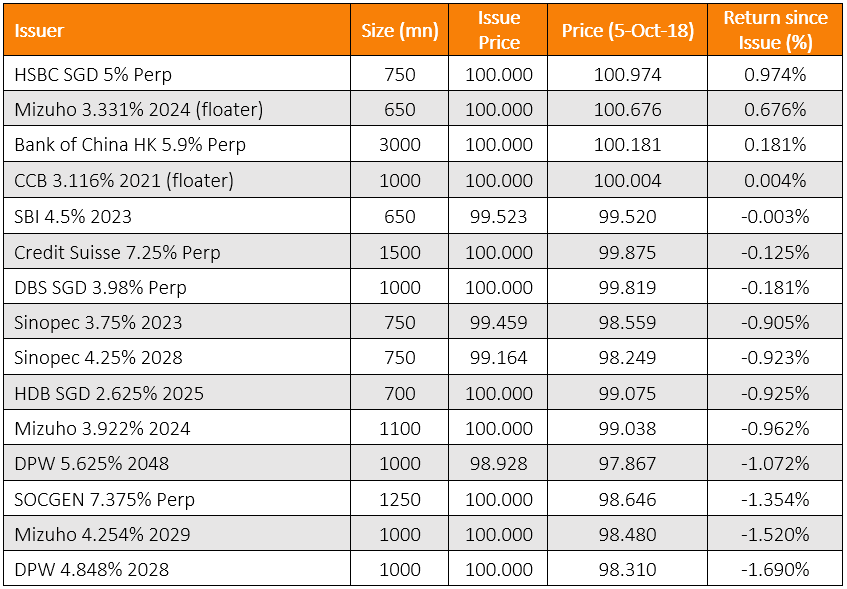 Source: BondEvalue | All in USD unless stated otherwise

Credit Suisse and SOCGEN priced USD Perps (Contingent Convertible or CoCo structures) at attractive yields of over 7%. Other prominent bank deals in September were by Mizuho, Bank of China, China Construction Bank and State Bank of India.

We are delighted to announce that BondEvalue will be participating in the Swiss Fintech Day at Zurich on 16-Oct-18. Do visit our booth and meet the team if you’re in Zurich next week!

Book a meeting with the BEV Team