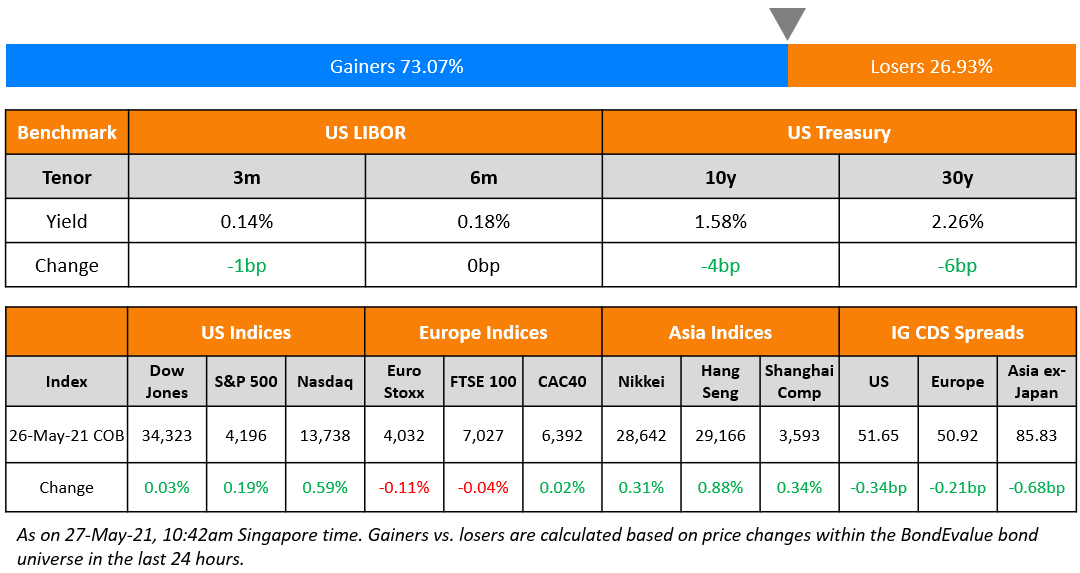 S&P closed higher by 0.2% while Nasdaq ended up by 0.6%. Tesla was among the gainers, up 2.4%. Fed officials continue to play down inflation fears with US 10Y Treasury yields easing 4bp to 1.58%. European Indices remained almost unchanged with FTSE and CAC flat while DAX down 0.1%. US IG CDS spreads were 0.3bp tighter and HY spreads were 2bp tighter. EU main spreads were 0.2bp tighter and crossover spreads tightened 2.6bp. Asian equities are off to a soft start, down ~0.1% while Asia ex-Japan CDS spreads tightened 0.7bp. Another busy day for Asian primary markets with 8 new issues including the likes of Greenland, NWD, Times China and Yango. 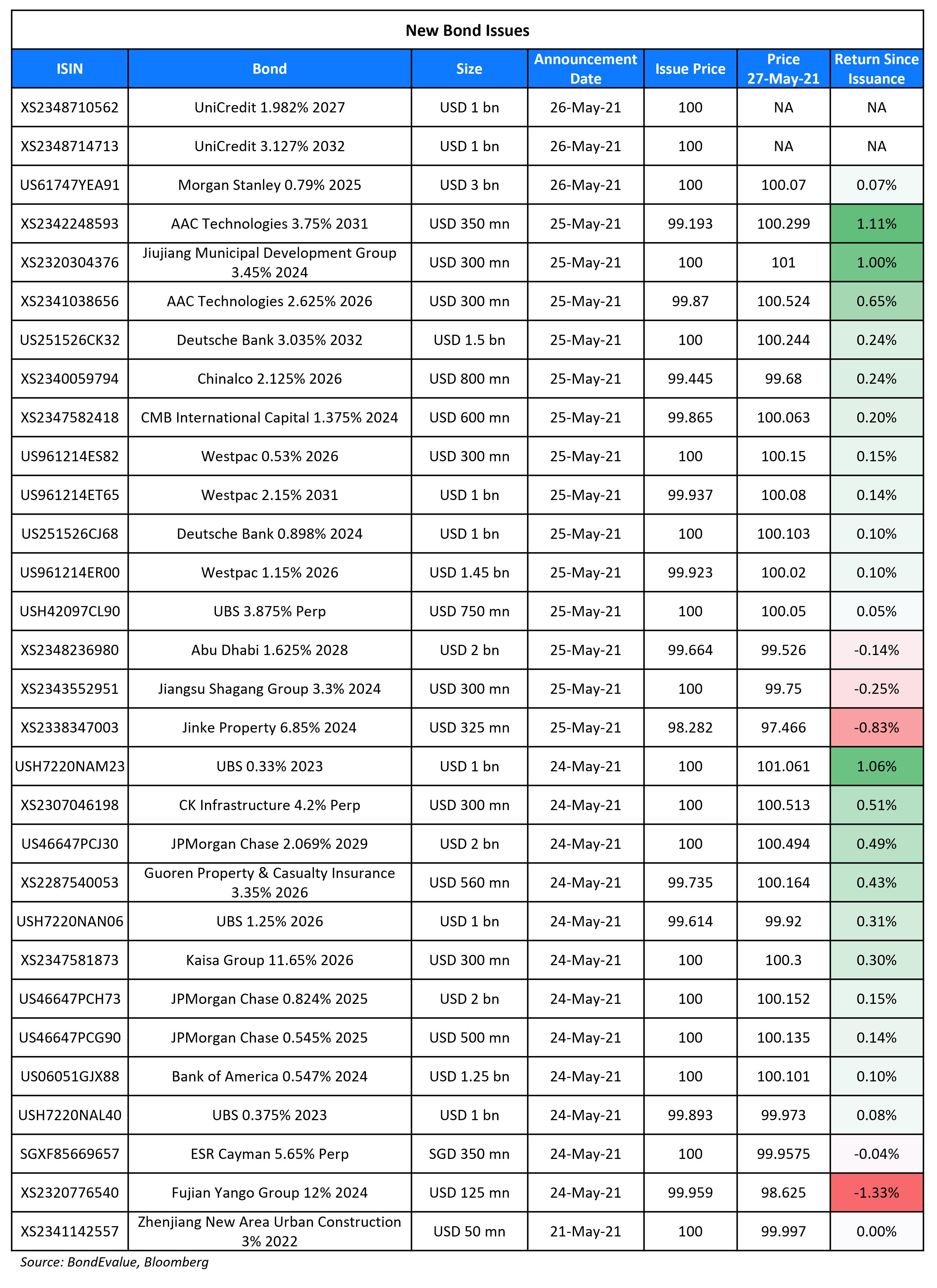 Abu Dhabi raised $2bn via a 7Y bond at a yield of 1.676%, ~27.5bp inside initial guidance of T+70/75bp. The bonds have expected ratings of AA/A. “Seven years is the sweet spot in the market right now. A lot of issuers are choosing seven or 12 years because of the macros of rates” said Zeina Rizk, executive fixed income director at Arqaam Capital. This is Abu Dhabi’s first dollar issuance this year and comes after three deals last year raising a combined $15bn. The new bonds were priced between their 3.125% 2027s and 2.5% 2029s that yield 1.58% and 1.9% respectively.

Westpac raised $2.75bn via a three-trancher. It raised:

The bonds are unrated and received combined orders over $8bn, 2.9x issue size.

Morgan Stanley raised $3bn via a 4Y non-call 3Y (4NC3) bond at a yield of 0.79%, 17bp inside initial guidance of T+65bp area. The bonds have expected ratings of A1/BBB+/A. The bonds are callable at par one month prior to maturity and also have a make whole call (MWC) until May 30, 2024. Proceeds will be used for general corporate purposes.

OUE Commercial REIT raised S$150mn via a 5Y bond at a yield of 3.95%, 20bp inside initial guidance of 4.15% area. The bonds are unrated and received orders over S$415mn, 2.8x issue size. Private banks will get a 25 cent rebate. OUE CT Treasury is the issuer and DBS Trustee is the guarantor.

Jiangsu Shagang Group raised $300m via a debut 3Y bond at a yield of 3.3%, 50bp inside initial guidance of 3.8% area. The bonds have expected ratings of BBB-, and received orders over $1.1bn, 3.7x issue size. Asian took 98% and Europe/offshore US took 2%. Banks and financial institutions received 57%, fund/asset managers 39%, and sovereign wealth funds/insurers/others 4%. Proceeds will be used for offshore debt refinancing. The bonds will be issued by Wealthy Vision Holdings and guaranteed by Jiangsu Shagang.

Jiujiang Municipal Development Group raised $300m via a 3Y bond at a yield of 3.45%, 45bp inside the initial guidance of 3.9% area. The bonds have expected ratings of BBB- and received orders of over $1.4bn, 4.7x issue size. Proceeds will be used for onshore project construction. The issuer is wholly owned by The Jiujiang State-owned Assets Supervision and Administration Commission, an investment/financing/construction platform in Jiangxi province.

Chinalco Capital Holdings Ltd raised $800mn via a 5Y bond at a yield of 2.125%, 40bp inside the initial guidance of T+185bp area. The bonds were rated A- and received orders of over $4bn, 5x the issue size. Asian investors took 99% and Europe 1%. Banks and financial institutions were allocated 67%, fund/asset managers 29%, and sovereign wealth funds/insurers/private banks 4%. The bonds are guaranteed by state-owned Aluminium Corporation of China (Chalco). Proceeds will be used for offshore debt refinancing.

Jinke Property raised $325mn via a 3Y bond at a yield of 7.5%, 20bp inside the initial guidance of 7.7% area. The bonds have expected ratings of B+, a notch lower than the issuer rating and received orders over $1.45bn, 4.5x the issue size. The notes provide a 20-cent rebate for private bank orders.

Hong Kong-listed Chinese natural gas operator, Zhongyu Gas pulled its $200mn 3Y issuance. Prior to the announcement, the bonds were expected to be issued at a yield 6%, 10bp inside the initial guidance at 6.1% area. The bonds had expected ratings of Ba3/B+, and had received orders over $520mn, 2.6x the issue size. The reason for pulling the bond deal is unclear.

Peking University Founder Group (PUFG) was accused in a filing to Hong Kong’s High Court this week after failing to make good on keepwell deeds for its dollar bonds. Bloomberg also reports that keepwell structures are also present on China Huarong’s bonds with most of its $22bn of dollar debt having such provisions from the onshore parent.

On the view that it may be time to begin tapering debate
Randal Quarles, Fed vice-chair
“If my expectations about economic growth, employment, and inflation over the coming months are borne out . . . and especially if they come in stronger than I expect . . . it will become important for the [Federal Open Market Committee] to begin discussing our plans to adjust the pace of asset purchases at upcoming meetings,” Quarles said. “In particular, we may need additional public communications about the conditions that constitute substantial further progress since December toward our broad and inclusive definition of maximum employment,” he added. “The best analysis we currently have is that the rise in inflation to well above our target will be temporary. But those of us on the FOMC are economists and lawyers, not prophets, seers and revelators. We could be wrong, and what happens then?” “Part of the calculus in balancing the risks of either overshooting or undershooting our 2 per cent goal is that the Fed has the tools to address inflation that runs too high, while it is more difficult to raise inflation that falls below target.” “If we had changed our monetary policy framework at 6 per cent inflation, that would be a different sort of thing. We have some elbow room to be wrong here.”
Richard Clarida, Fed vice-chair
“There will come a time in upcoming meetings, we’ll be at the point where we can begin to discuss scaling back the pace of asset purchases.” “It’s going to depend on the flow of data that we get.”
Mary Daly, San Francisco Fed president
We’re talking about talking about tapering, and that is what you want out of us,” she said. “You want to be long-viewed here.”
On China struggling to suppress bubbles in markets awash with money – Alex Wolf, head of investment strategy for Asia at JPMorgan Private Bank

“The policy trend is now focused on ensuring financial stability,” said Wolf. “Beijing will want to resolve bubbles risks at the outset, in a targeted manner, using strong rhetoric and small adjustments to policy. That appears to be enough for now.” “When you have a closed capital account like China and you loosen policy through the credit channel, the money stays contained domestically.” “It then needs to find a place. It can be housing, it can be stocks — it moves across the financial system. This is one of the biggest constraints to policy and is why China has been quick to remove stimulus this year.”

On the potential local government credit defaults from China’s debt clamp down
Larry Hu, chief China economist at Macquarie Group
“Notably, the government said in April that insolvent local government financing vehicles should go bankrupt,” Hu said. “Since LGFV bonds have never defaulted before, it could cause market jitters if it happens for the first time.”
In a note by Citic Securities
“In general, given the countercyclical adjustment to the pandemic and the [recent] tightening of LGFVs, it indicates that the risk of a correction in the LGFVs market is increasing.”
Banny Lam, head of research at CEB International Investment
“China’s economy is still recovering,” said Lam. “So I think a restructuring is more likely, possibly through state companies to minimise the impact on confidence. Huarong is a good example.”
Zhang Ming, senior fellow and deputy director at the Institute of Finance & Banking at the Chinese Academy of Social Sciences

On Euroclear reversing payments mistakenly made on UniCredit bonds – in a statement by Euroclear
“Due to an internal processing error, nevertheless provisional credits were made and became visible to clients. No payment has been made.”
On structural loopholes in sustainability-linked bonds – Stephen Liberatore, head of fixed-income ESG and impact investing strategies at Nuveen
“We are underwhelmed by the goals and penalties associated with recent SLB deals,” Liberatore wrote. “The goals or targets can be gamed to make them relatively easy to achieve, sometimes based on the issuer’s current trajectory, and without the need for meaningful new investment.” “This makes it virtually impossible for an investor to know how the proceeds of the bonds were directed and what specific outcomes they delivered,” wrote Liberatore. “And while it doesn’t meet our impact standards, it may contribute to our view of the issuer as an ESG leader willing to source capital in public markets with a link to goal-setting and accountability,” he wrote.
On quant pioneer placing bullish wager on interest-rate risk
Dave Plecha, the global head of fixed income at Dimensional
“Rising interest rates do not automatically imply a negative return for a bond,” said Plecha. “We develop portfolios with higher expected returns than the benchmark and over the years we’ve delivered on that.” “[Eugene] Fama’s work shows that, on average, when yield curves are upwardly sloped, you can expect larger premiums for moving out the curve,” he said. “That tells us to go out and extend duration and collect them.”
Eugene Fama, professor at the University of Chicago Booth School of Business and Dimensional consultant
“Companies and governments are issuing tons of debt and they’re all getting snapped up.” “Investors are still buying a lot of bonds.” 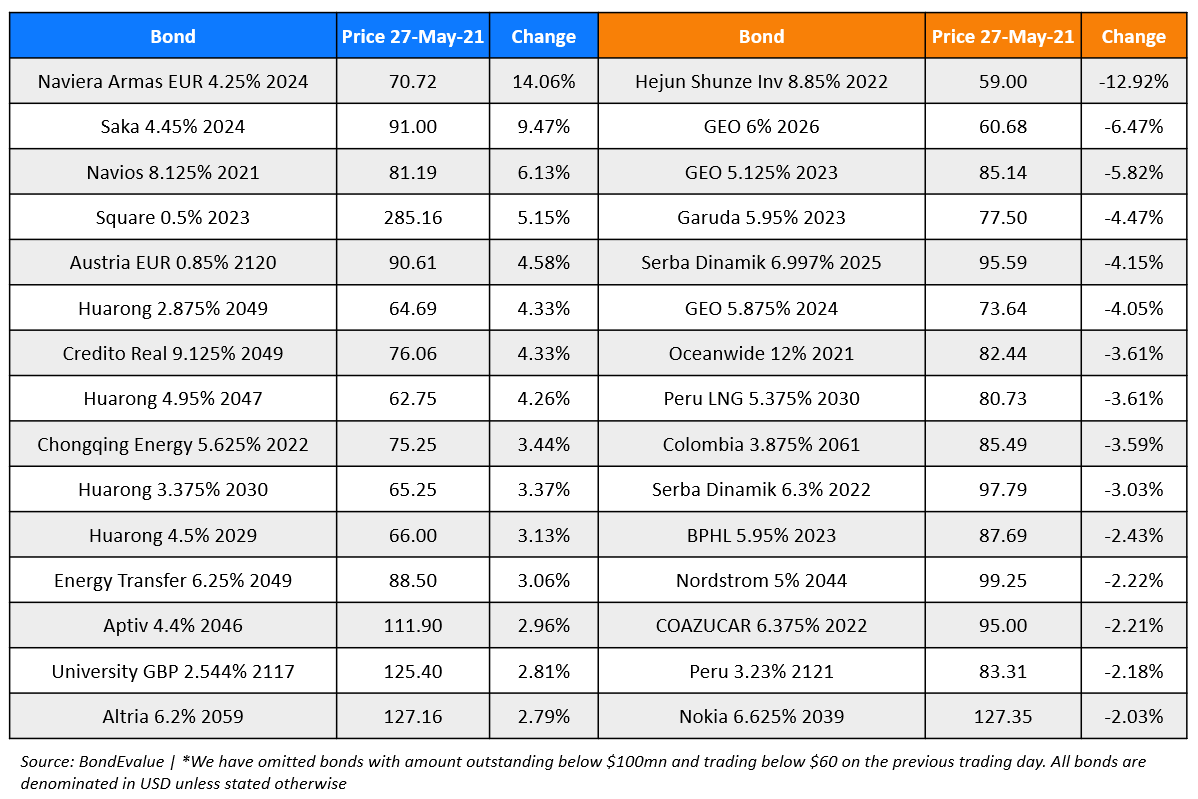