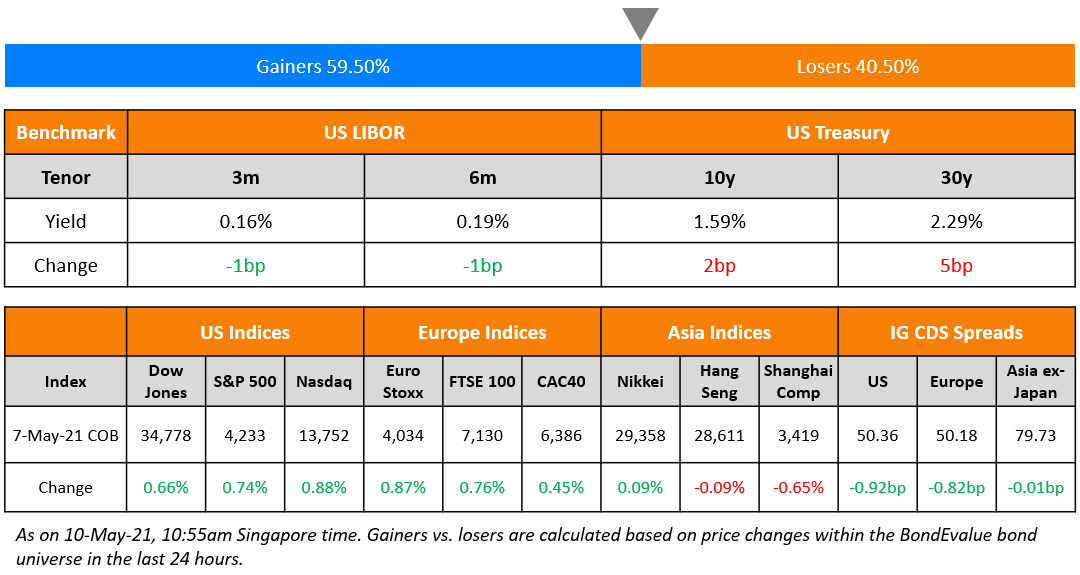 S&P ended up 0.7%, setting a new record while Nasdaq closed 0.9% higher with tech stocks rallying. US non-farm payrolls (Term of the Day, explained below) for April rose by just 266k vs. a forecast of 978k, and significantly lower to March’s reading of 770k. US 10Y Treasury yields rebounded to 1.59% after hitting a two month low of 1.47%. The 30Y yield also dropped to 2.16%, its lowest since March 1 before recovering to 2.29%. Friday also witnessed a ransomware cyber-attack on the largest fuel pipeline in US. A prolonged shutdown of the pipeline could result in a spike in the gasoline and diesel prices. US IG CDS spreads were 0.9bp tighter and HY tightened 3.3bp. EU main CDS spreads were 0.8bp tighter and crossover spreads tightened 3.2bp.Asian equity markets are off to a positive start, up ~0.5% while Asia ex-Japan CDS spreads were flat. It’s a busy Monday at the Asian primary markets with nine new dollar deals, including ones from Agile, KWG, CIFI, JSW Hydro and Cathay Pacific. 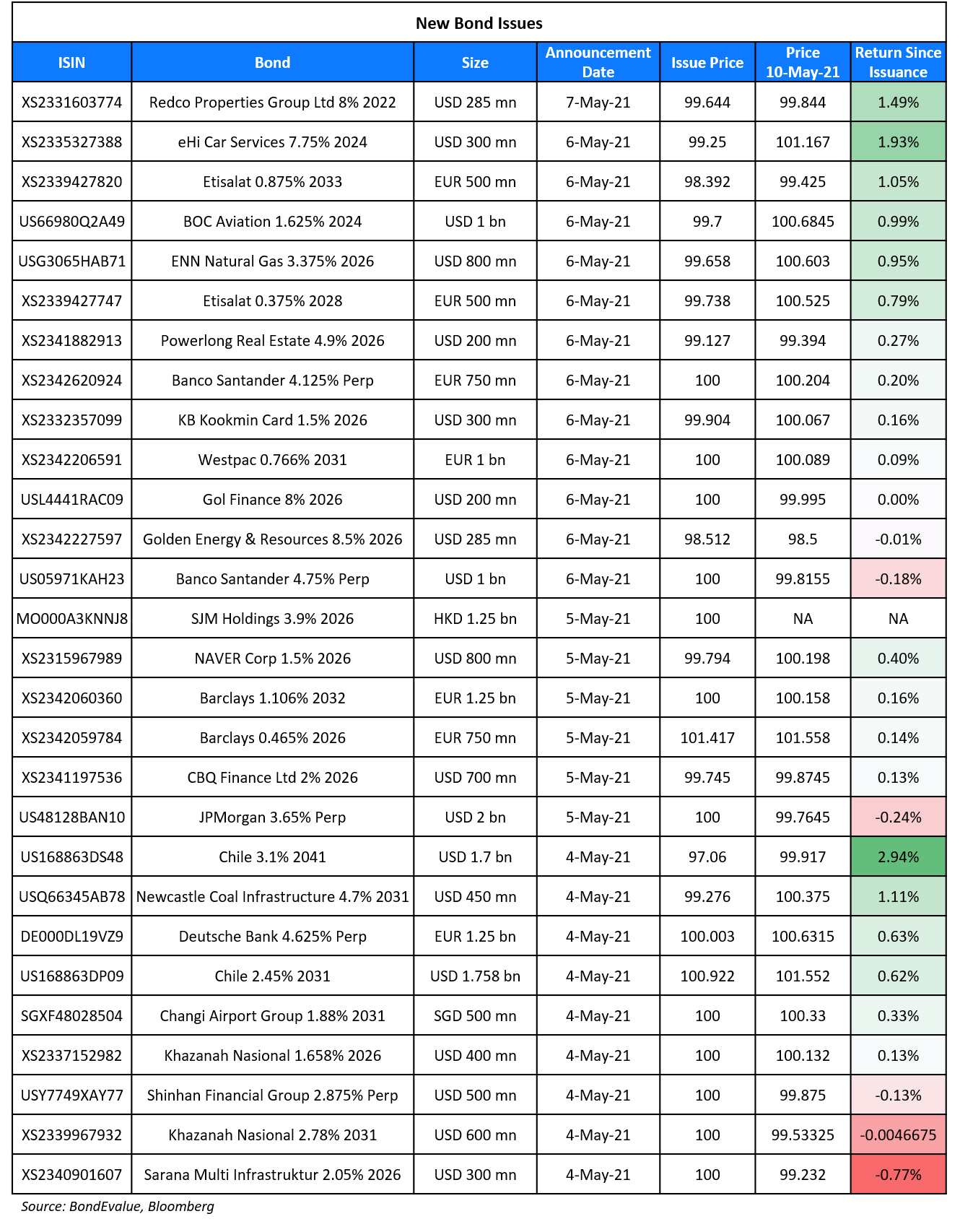 Redco raised $65mn via a tap of their 8% sustainability notes due 2022 at a yield of 8.4%, 35bp inside initial guidance of 8.75% area. The bonds have expected ratings of BB-, and received orders over $400mn, ~1.8x issue size. Proceeds will be used to refinance certain of the existing medium-to long-term offshore indebtedness which will become due within one year and in accordance with their Sustainable Finance Framework. 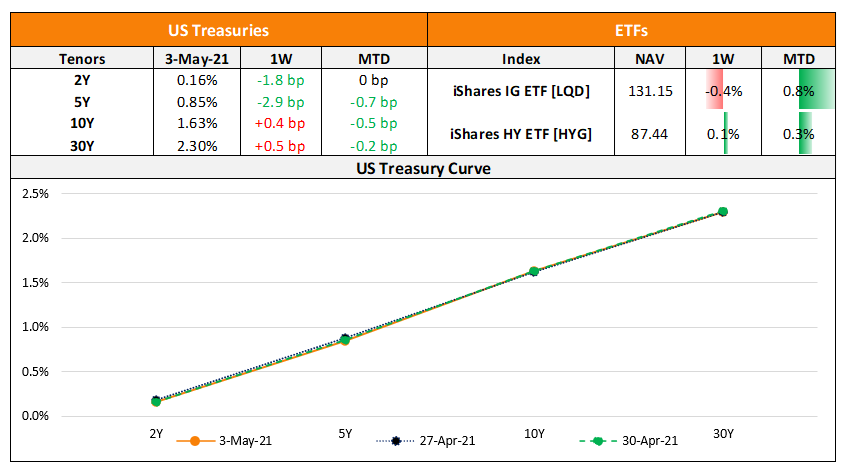 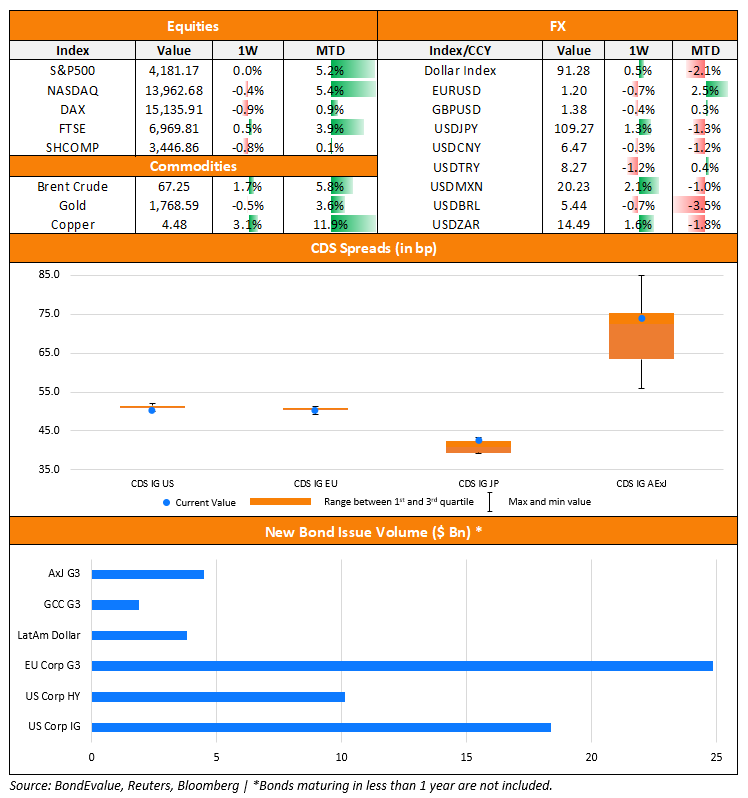 Non-Farm Payrolls (NFP) is a key data point that is released by the US Bureau of Labor Statistics (BLS) usually on the first Friday of every month. NFP measures net changes in employment excluding agricultural, local government, private household and not-for-profit sectors over the past month and is a key economic indicator in the United States. A high reading of the NFP is considered a positive sign for the US economy while a negative reading is considered a sign of a slowdown in the US jobs market. The NFP indicator is closely watched by traders, especially as it is one of the first monthly economic indicators to be released, and because of the direct relationship between job creation and interest rates, and hence economic growth.

On the possibility of US debt ceiling pinching in summer – Janet Yellen, US Treasury Secretary
“It is exceptionally challenging this time to try to figure out just how long those (extraordinary) measures are going to last in part because of higher and more volatile spending and revenue numbers associated with the state of the economy and the pandemic,” she said. “We are concerned that there are scenarios that give (a) very limited amount of additional time to use extraordinary measures,” Yellen added. “There are scenarios in which some time during the summer” room would run out even after special measures were employed, she said.
On the call for change to ECB’s inflation target in line with Fed approach – Olli Rehn, European Central Bank interest rate-setting council member, former Finnish economy minister and EU economic and monetary affairs commissioner
“If this is the case, from the point of view of economic and social welfare it makes sense to accept a certain period of [inflation] overshooting, while taking into account the history of undershooting,” Rehn said. “That is why, in addition to price stability, a focus on full or maximum employment makes sense in the current context of a lower natural rate of interest.” “What is worse is that 2 per cent has been perceived as a ceiling and that is dampening inflation expectations.”
“If you look at the policy mix of fiscal and monetary policy in exiting from the crisis . . . monetary policy should play libero in the sense that it will ensure favourable financing conditions so that we will continue to provide a bridge over troubled water,” he said. “Europe still needs very accommodative monetary policy. This stance will, however, not be maintained forever and at some point the financing costs of the [eurozone’s] sovereigns will increase,” he said.
On Treasury yields rebounding after hitting two-month lows in wake of weak jobs report
Andrew Richman, senior fixed income strategist at Sterling Capital Management
“Despite a huge miss, which it was, it’s still employment going in the right direction,” said Richman. “The Fed’s being extremely easy here still. We have stimulus coming on. It’s inflationary in the short run,” Richman said.
John Canavan, lead analyst at Oxford Economics
“As market participants pile into curve-steepening trades, part of that results in selling of the long end,” Canavan said.
On Euro zone bond yields swinging after US jobs data miss – Sameer Samana, senior global market strategist at Wells Fargo Investment Institute
“We would not read too much into any one jobs report and continue to think the labour market remains on track and will be more than enough to underpin consumer confidence and consumption”, said Samana.
On the prospect of a rebound to 2% yields for Treasury – Mark Holman, TwentyFour Asset’s chief executive officer
“When you put all of this together, it confirms my slightly nervous view around inflation,” said Holman. “From a bondholder’s perspective, from my perspective, inflation is the bigger risk. We’ll see more bear steepening of the Treasury yield curve,” with long-term rates rising further. “The bull market for bonds remains intact,” he said. “We can get to 2%, but it won’t be sustainable.”
On investors on the lookout for price pressures building in emerging markets
Emily Weis, macro strategist at State Street Global Markets
“Inflation has reared its head as a key market narrative once again,” said Weis. “This is partly driven by concerns around extreme monetary accommodation, fiscal largess and their combined impact on the green shoots of recovery.”
Sanjiv Bhatia, chief investment officer at Pembroke Emerging Markets
“If the stimulus continues, at some point it will become inflationary,” said Bhatia. “At some point, we believe it will become a problem.”
Kate Moore, the head of thematic strategy at BlackRock
“On the one hand, the valuations of growth stocks look meaningfully less demanding after recent underperformance coupled with earnings upgrades,” said Moore. “On the other, rising inflationary pressures from the broad economic restart and low inventories should be supportive of cyclicals and commodity producers.”
On irrational inflation mania in bonds
Praveen Korapaty, Goldman’s chief interest-rate strategist
“We do not see the sort of inflationary pressures that markets appear to be fearing, and high growth rates will not necessarily translate into a higher inflation rate,” said Korapaty. “If we are right and inflation readings come off, we might be tempted to fade Fed pricing and take the view that markets can push back when pricing Fed liftoff,” Korapaty said.
Tiffany Wilding, economist at Pimco
“We basically argued that inflation expectations are a little below where the Fed sees them”, said Wilding. “Because we think front-end rates are pricing in a more aggressive Fed path than we believe, we do like shorter-dated nominal bonds, and think there’s value there,” she said.
On the warning of complacency on India USD bonds after recent rebound –
Chang Wei Liang, an analyst at DBS Bank
“We are concerned over credit complacency, with markets seemingly keen to look past the short-term hit to growth” from the Covid resurgence. “Optimistically, a case could be made for a W-shaped recovery once the second COVID wave wanes, but it is likely that damage to Indian corporate and household balance sheets proves more persistent.”
On Singapore dollar bonds remaining a core income allocation as markets bounce back – Omar Slim, CFA at PineBridge Investments
“We believe high quality SGD corporate bonds offer some value to Singaporean investors. While the Ministry of Trade and Industry left its GDP growth forecast for this year unchanged at 4 per cent to 6 per cent (as of Feb 15, 2021), we believe that GDP expansion should come in at the higher end of that forecast. The smooth roll-out of vaccines and relaxation of Covid-19 restrictions should further underpin growth for the year,” he says. 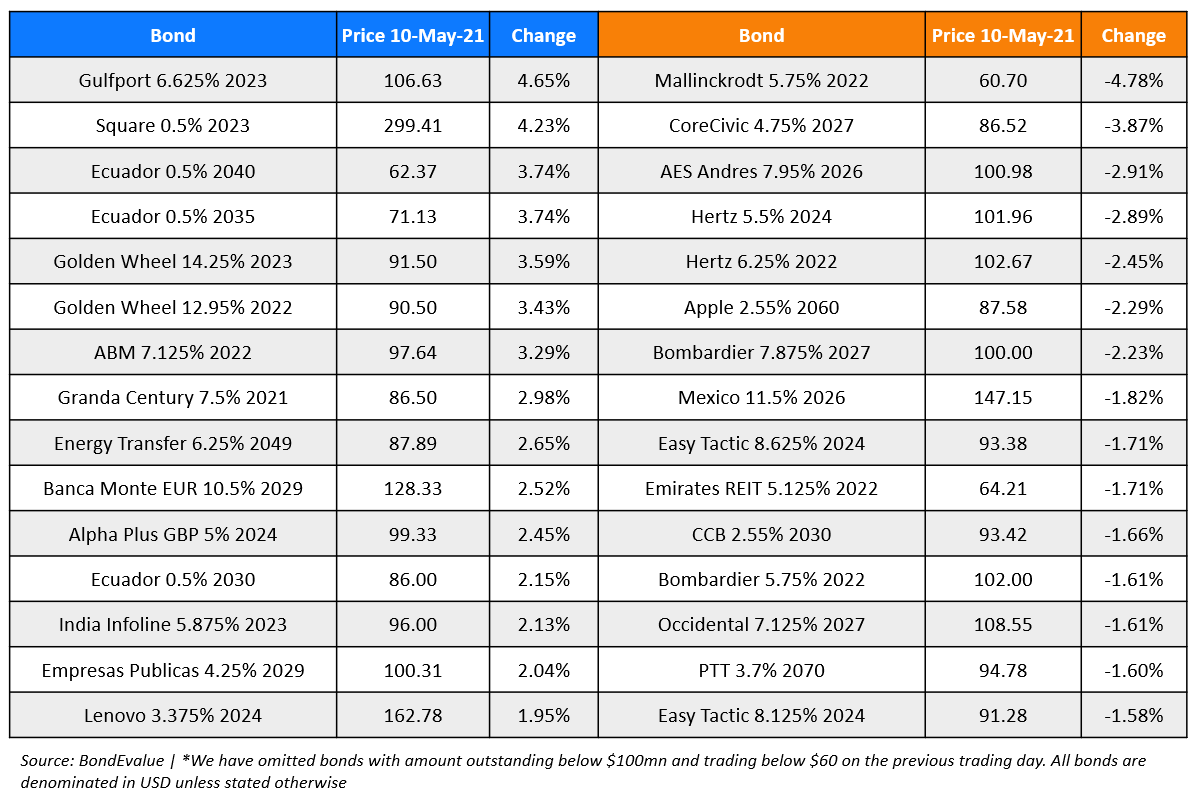