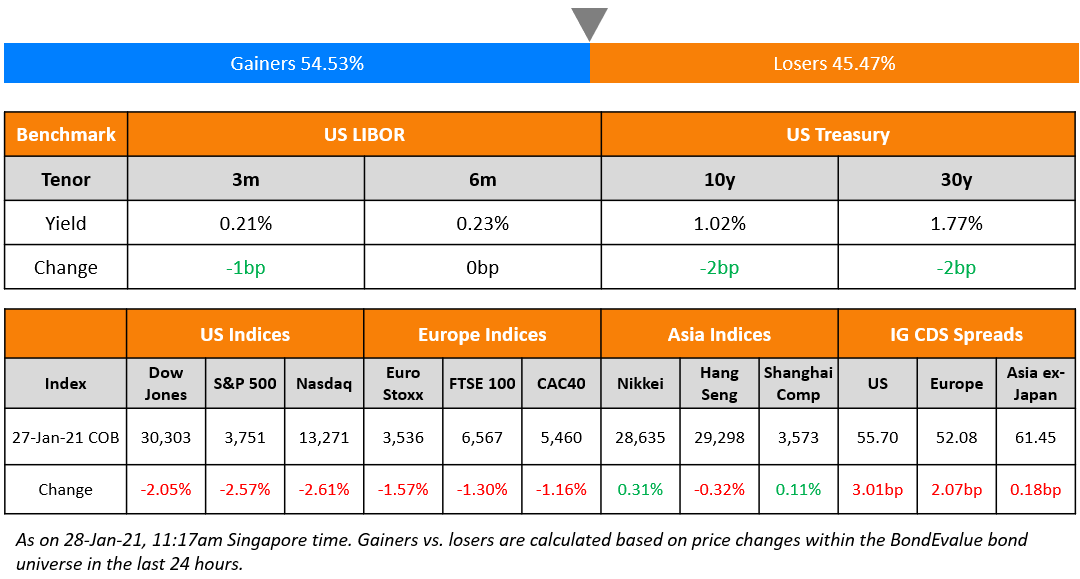 Sign up for the upcoming sessions on Understanding New Bond Issues & Credit Ratings on Tuesday, February 2 and Using Excel to Understand Bond Calculations on Wednesday, February 3. This session is part of the Bond Traders’ Masterclass across four sessions specially curated for private bond investors and wealth managers to develop a strong fundamental understanding of bonds. The sessions will be conducted by debt capital market bankers with over 40 years of collective experience at premier global banks. Click on the image below to register. 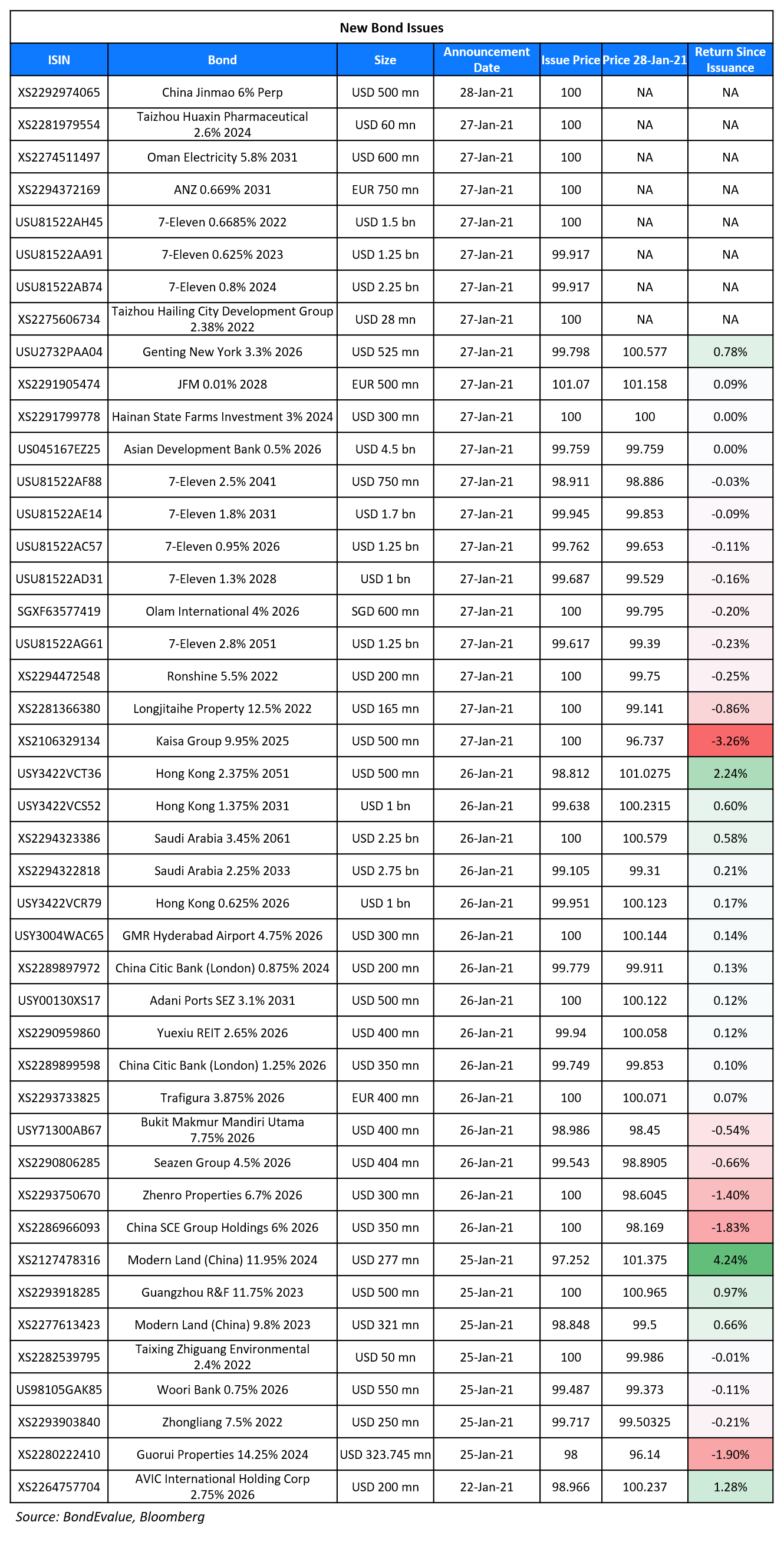 Oman Electricity Transmission Company raised $600mn via a 10Y Yankee bond at a yield of 6%, 50bp inside initial guidance of 6.5%-6375%. The bonds have expected ratings of Ba3/BB-, in line with the guarantor and received orders over $3.1bn, 5.1x issue size. Oryx Funding will issue the bonds with a guarantee from Oman Electricity Transmission Company.

ANZ raised €750mn ($908mn) via a 10.25 non-call 3.25 (10.25NC5.25) tier 2 SDG bond (Term of the day, explained below) at a yield of 0.669%, 25.5bp inside initial guidance of Mid-Swaps + 137.5bp. The bonds have expected ratings of Baa1/BBB+/A-, and received orders over €2.5bn ($3bn), 3.6x issue size. Proceeds will be used to finance or refinance, in whole/part project finance or corporate loans to projects and businesses, or operating/capital expenditures eligible categories and meet the process for evaluation and selection in accordance with the “ANZ Sustainable Development Goals (SDG) Bond Framework”. The bonds will be mandatorily converted into shares of ANZBGL if a non-viability trigger event occurs. There would be a permanent write-down if conversion fails within 5 business days of the trigger event. The bonds have special event calls, which could happen upon the occurrence of a Regulatory Event and for certain taxation reasons.

China Jinmao raised $500mn via a subordinated perpetual non-call 5Y (PerpNC5) bond at a yield of 6%. The bonds have expected ratings of Ba2. If not called, the coupon will reset every five years to the prevailing 5Y Treasuries plus the initial spread of 558.4bp. There will be a 25bp step-up in year 10 and a further 75bp step-up in year 25. Proceeds will be used for debt refinancing. Franshion Brilliant is the issuer and the Hong Kong-listed parent is the guarantor. Jinmao did not release initial guidance on the perp and went straight to final pricing.

Genting NY raised $525mn via a 5Y bond at a yield of 3.344%, or T+295bp, 30bp inside initial guidance of T+325bp area. The bonds have expected ratings of BBB-/BBB-, and received orders over $2bn, 3.8x issue size. Proceeds will be used to repay and/or permit the amendment and restatement of the existing revolving credit facility, the existing term loan facility, and the existing construction loan facility and pay related transaction fees and expenses. Remaining proceeds if any, will be used for general corporate purposes. The issuer is an indirect subsidiary of Genting Malaysia.

Hainan State Farms Investment raised $300mn via a debut 3Y bond at a yield of 3%, 50bp inside initial guidance of 3.5% area. The bonds have expected ratings of Baa2/BBB+ and received orders over $1.3bn, 4.7x issue size. The bonds will be issued by wholly owned subsidiary Hainan State Farms International (HK) and guaranteed by the state-owned parent company. Proceeds will be used for general corporate purposes.

Longjtaihe Property raised $65mn via a tap of its 12.5% 2022s at 12.5%, unchanged from initial guidance. TaiChen Development (BVI) is the issuer of the notes and Longjitaihe Property is the parent guarantor. Proceeds from the issue will be used for refinancing onshore debt and working capital.

On no bond taper for ‘some time’ as recovery moderates

“The whole focus on exit is premature,” he said. Powell said that the widespread availability of vaccines was grounds for optimism, noting“several developments point to an improved outlook for later this year.

In a statement by the Federal Open MarketCommittee (FOMC)

“The pace of the recovery in economic activity and employment has moderated in recent months, with weakness concentrated in the sectors most adversely affected by the pandemic,” the FOMC said. “The path of the economy will depend significantly on the course of the virus, including progress on vaccinations,” the statement said. “The ongoing public health crisis continues to weigh on economic activity, employment, and inflation, and poses considerable risks to the economic outlook.”

On the bond market watching for ongoing Fed reassurance on purchases

“Powell was full throttle on the message,” said Brien. “Powell does not want the market or the public to make presumptions about the end of Fed accommodation; he wants to be the one who makes the incremental adjustments to the outlook.”

Bruno Braizinha, an interest rate strategist at Bank of America

“It’s critical in the context of the recovery that you expect in 2021 for the Fed to stay very credible in their dovish messaging,” said Braizinha. “But for this movement to be orderly, it’s necessary that the Fed keeps a concerted message around the removal of accommodation,” he said. “Even if the Fed stays dovish it’s going to be difficult to control the message at that point,” said Braizinha. If there is a sharp increase to the 1.5% to 1.75% area without solid economic improvement, that “is going to impact the risky asset outlook.”

“If yields go up because the economy is on fire and inflation expectations are moving up, then that’s OK for stocks,” said Berezin. “Not only are they cheap, they also are a hedge against a bigger than expected rise in yields.”

“I expect that this year’s January round of issuance has seen less demand for hedging from borrowers due to entrenched low-rates expectations,” said Antoine Bouvet, senior rates strategist at ING. “This has resulted in wider swap spreads overall. Both factors reflect dim economic views.”

“It is getting overstretched on the 10-year — and the situation in Italy could be fixed quickly,” he said in emailed comments. “We are currently short the 10-year asset swap outright and versus the two-year in a compression trade — which is the safest way to play a normalization.”

“Given the recent appetite for bonds, also seen with yesterday’s EU SURE supply that saw strong investor demand, we expect another strong interest in the bonds on sale today,” Christiansen said.

According to Mizuho analysts

“We expect to see some relative stability during the session ahead, without too many catalysts on the schedule,” Mizuho analysts said. “BTPs (Italian bonds) may have less of a strong day ahead, simply given yesterday’s decent performance (after PM Conte resigned), but we look for further peripheral tightening to come,” Mizuho analysts said. 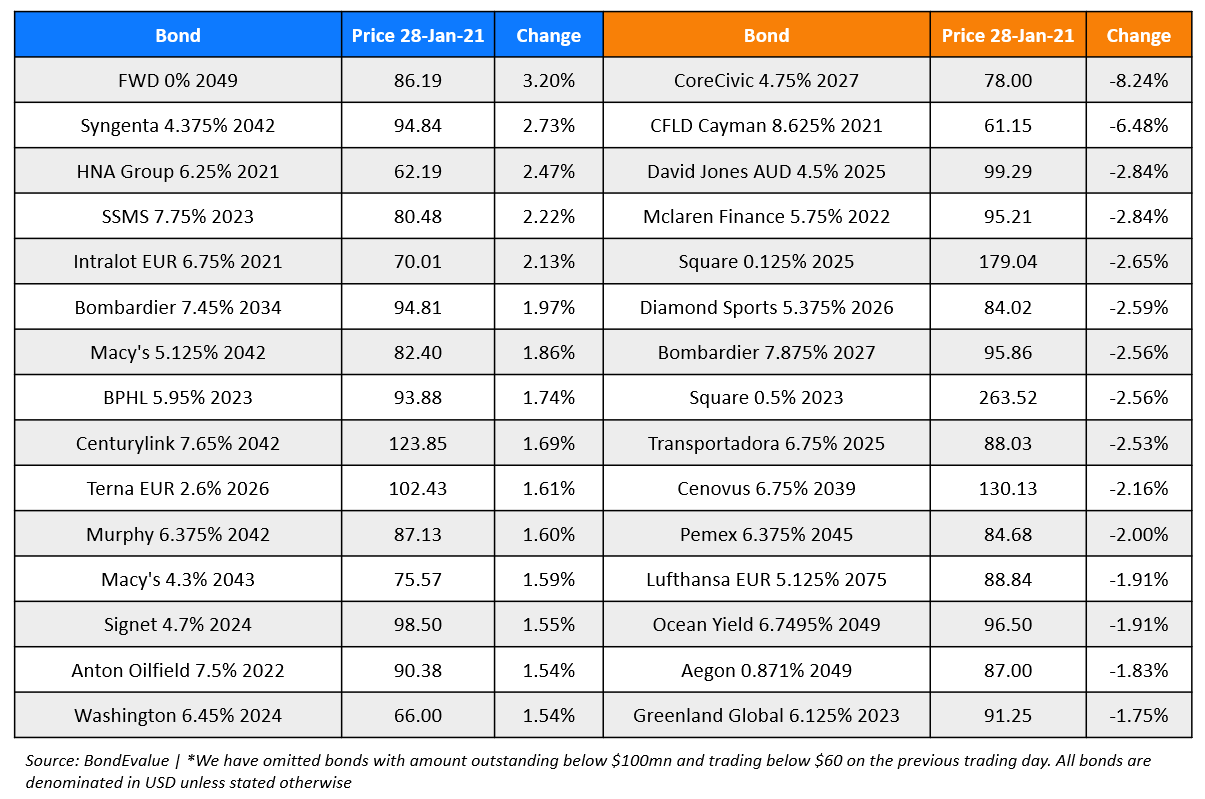