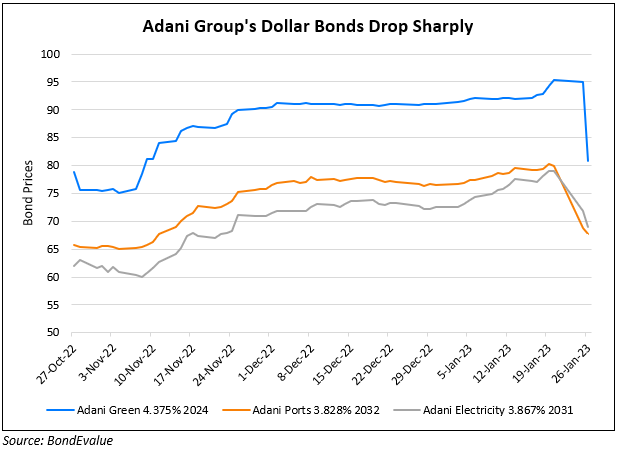 Dollar bonds of Adani Group dropped sharply by over 10 points after Hindenburg Research said that it held short positions in the group via its dollar bonds and non-Indian-traded derivative instruments. Hindenburg is popular in the markets as a short-seller with one of its recent famous disclosures being exposing automaker Nikola’s operations. In a thread of tweets, Hindenburg Research said that the findings of its “2-year investigation” in addition to speaking with dozens of individuals, including former Adani Group executives as well as a review of documents showed that the group “engaged in a brazen stock manipulation and accounting fraud scheme over the course of decades”. It added, “Adani family members allegedly cooperated to create offshore shell entities in tax-haven jurisdictions like Mauritius, UAE & the Caribbean to generate forged import/export documentation, generate fake or illegitimate turnover and siphon money from the listed companies”. It also said that key listed Adani companies had “substantial debt” that has put the group on a “precarious financial footing”.

Adani Group in response, dismissed the claims as baseless, saying that it was timed to damage its reputation ahead of the planned $2.5bn share issuance of Adani Enterprises.

Separately, UAE investors International Holding Co. (IHC), Abu Dhabi Investment Authority (ADIA) and Mubadala Investment are said to be bidding for a stake in the $2.5bn share issuance by Adani Enterprises, as per sources.