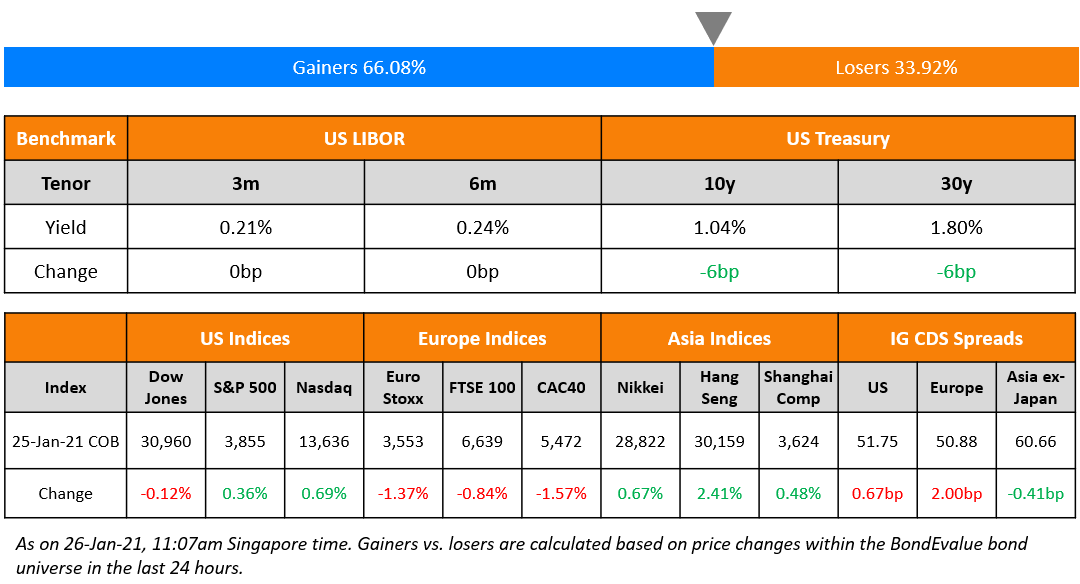 S&P and Nasdaq reached closing highs, both up 0.4% and 0.7% respectively. US 10Y Treasury yields fell by 6bp as the yield curve flattened to a three-week low. Jim Vogel, a rates strategist at FHN Financial, explains the tightening of Treasury yields, “The buying…is part technical and fundamentally related to the pandemic in the EU, the looming resignation of Italy’s PM, and Senator Schumer’s goal to get stimulus passed in the next four to six weeks. A lot can go wrong, or right, in four to six weeks, as traders remember from stimulus deadlines that rolled from July to December”. German Ifo business climate index fell to 90.1 from December’s 92.2, and below the 91.8 consensus forecast. FTSE, DAX and CAC fell 0.84%, 1.66% and 1.57%. US IG CDS spreads were 0.7bp wider and HY was 2.1bp wider. EU main CDS spreads widened 2bp and crossover spreads widened 9.8bp. Asian primary markets are having a busy day with 10 new bond issues today. Asia ex-Japan CDS spreads are 0.4bp tighter while Asian equities are ~1.5% lower today.

Sign up for the upcoming sessions on Bond Valuation & Risk today and Bond Portfolio Optimization & Risk in Perpetual Bonds tomorrow, January 27. These are part of the Bond Traders’ Masterclass across four sessions specially curated for private bond investors and wealth managers to develop a strong fundamental understanding of bonds. The sessions will be conducted by debt capital market bankers with over 40 years of collective experience at premier global banks. Click on the image below to register. 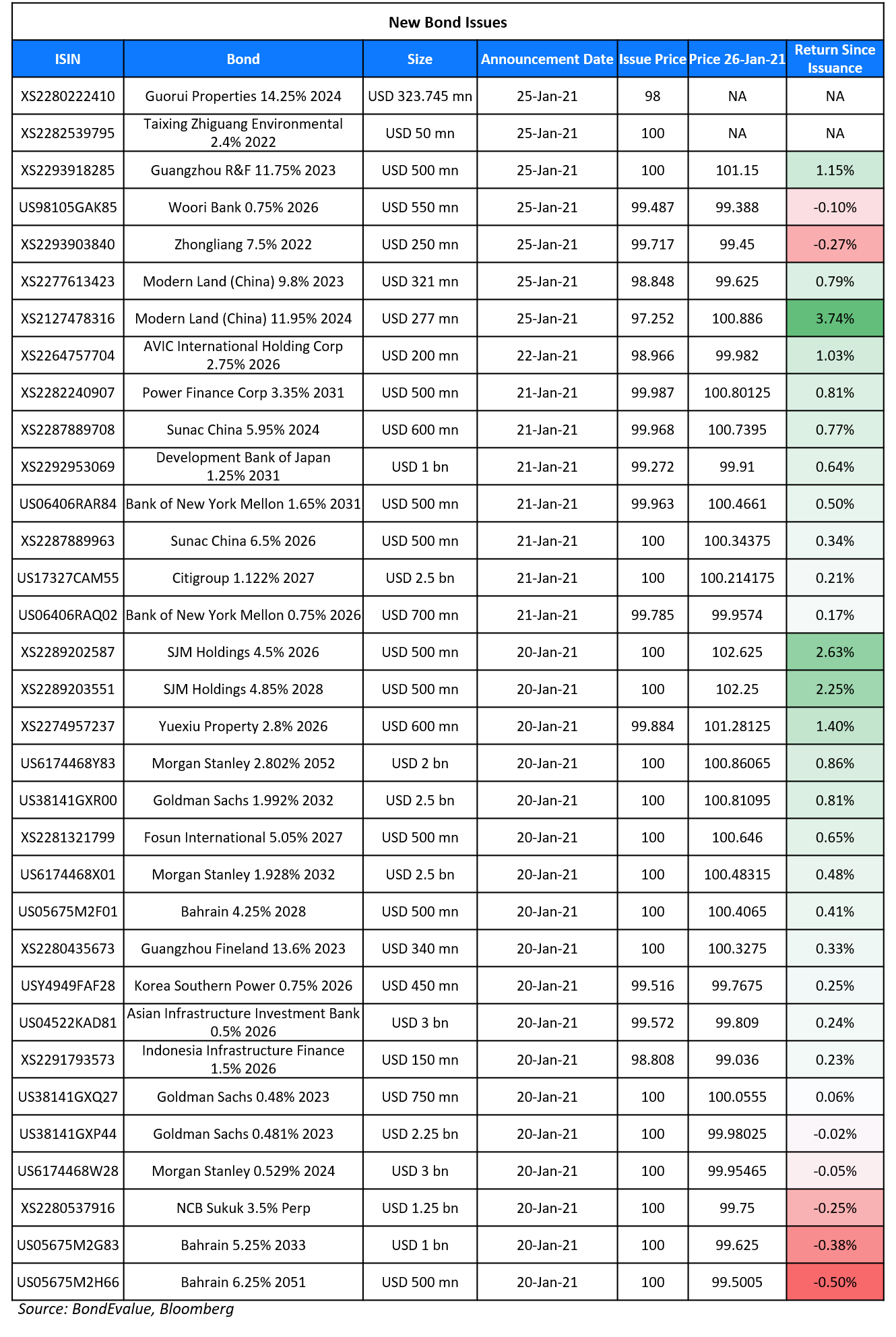 Guangzhou R&F raised $500mn via a 2.5Y at a yield of 11.75%, 55bp inside initial guidance of 12.3% area alongside tender offer. The bonds have expected ratings of B+, and received orders of over $2.3bn, 4.6x issue size. Asian investors took 90% of the bonds and EMEA 10%. Fund managers bought 68%, private banks 28%, and banks and insurance 4%. Easy Tactic is the issuer of the notes and R&F Properties (HK) is the guarantor, while Guangzhou R&F is the keepwell & equity interest purchase undertaking (EIPU) provider. Proceeds will be used for debt refinancing, including a concurrent tender offer for its $800mn 7.0% 2021s at a purchase price of $1,003.75 per $1,000 in principal plus accrued interest with the deadline on January 29. The old 2021s are currently trading at 100.25.

Tower Bersama pulled the tap of their 2.75% 2026s following tight final guidance. Initial guidance was at 2.3%-2.4% area while the existing notes were seen higher at a bid yield of 2.45% in secondary markets.

Zhongliang raised $250mn via a 364-day at a yield of 7.8%, 40bp inside initial guidance of 8.2% area. The bonds have expected ratings of B+, and received orders over $1.4bn, 5.6x issue size. Proceeds will be used for debt refinancing. Asian investors bought 94% of the notes and EMEA 6%. Asset/fund managers were allocated 56%, private banks 24%, and corporates, financial institutions and banks 20%.

Ciputra raised S$100mn ($750mn) via a 5Y bond at a yield of 6%, 25bp inside initial guidance of 6.25% area. The bonds were rated B+ by Fitch. The issuer is an Indonesian property developer and proceeds will partly be used to fund a tender offer of its outstanding S$150mn 4.85% 2021s with the offer ending on February 8. Bondholders will receive an early consent fee of 0.1% or S$250 of the principal if they agree to sell their bonds back by January 27, or a standard fee of 0.05% or S$125 thereafter. The bonds have a change of control put at 101 and will also need to meet certain financial covenants – maintaining a maximum consolidated total debt to equity ratio of 1:1 as well as a minimum consolidated tangible net worth of IDR 8tn ($569.6mn).

Woori Bank raised $550mn via a 5Y sustainable bond at a yield of 0.855%, or T+45bp, 30bp inside initial guidance of T+75bp area. The bonds have expected ratings of A1/A. Proceeds will be allocated to eligible categories in accordance with the issuer’s green, social and sustainability bond framework.

There’s a “prominent focus on the conditions facing customers who depend on bank-intermediated credit, as well as the conditions facing sectors which seek to obtain funding in bond markets,” he said. “A wide array of models and empirical methods is employed to assess the role played by financing conditions in determining the evolution of the economy and inflation dynamics.”

“Naturally, the focus on credit conditions in the banking system on the one side and the bond markets on the other is consistent with the main methods used by central banks in steering financing conditions,” Lane said. “The ECB routinely looks at a wide range of measures … with a prominent focus on the conditions facing customers who depend on bank-intermediated credit, as well as the conditions facing sectors which seek to obtain funding in bond markets,” he added. “If favourable financing conditions can be maintained with asset purchase flows that do not exhaust the envelope over the net purchase horizon of the PEPP, the envelope need not be used in full,” Lane said.

On taking climate risk into consideration when picking assets

“By performing its own analysis of these risks on the basis of rigorous methodologies, the ECB can contribute to the accurate valuation of … climate-related risks,” Panetta said.

“An active role in climate policy could undermine our independence and, eventually, jeopardise our ability to maintain price stability,” Weidmann said.

“Climate change can create short-term volatility in output and inflation through extreme weather events, and if left unaddressed can have long-lasting effects on growth and inflation,” Lagarde said.

Shaun Roache, an economist at S&P

Property led China’s recovery from the pandemic but was “going to play a smaller role for sure in terms of growth” in 2021. “You already have three levers that are being pulled tight at the moment,” he said. “I think if they pull too tight on housing as well, there is a risk that growth could undershoot.”

“If you think about the . . . scenario of lending not increasing, that’s extremely rare,” said Zhu. “Even when the economic activities were collapsing in the first quarter, lending was going up.”

The Chinese government was “much more effective at controlling credit than they were five or 10 years ago”. But he added that both banks and parts of the shadow banking sector had ways of “gaming the system”.

On foreigners edging back to Turkish markets, drawn by President Erdogan’s pledge of reforms

“There could be some value in Turkish assets and we have started to look with a little bit more interest especially with the very high rates,” said Mouawad. “It is still a hairy market to invest in but for sure, relative to what has been happening in the last 18 months, things have dramatically shifted and … that has a lot to do with the people running the economic policy,” he said.

“Investors didn’t expect the leopard to have changed his spots and he hasn’t. I suspect people will be feeling Erdogan’s influence by mid-2021” when rates will be cut too soon, said Robertson. “Turkey can’t be a long-term investment for portfolio investors because they will expect the rinse-and-repeat process … that we’ve seen so many times in the last 15 to 20 years,” Robertson said. 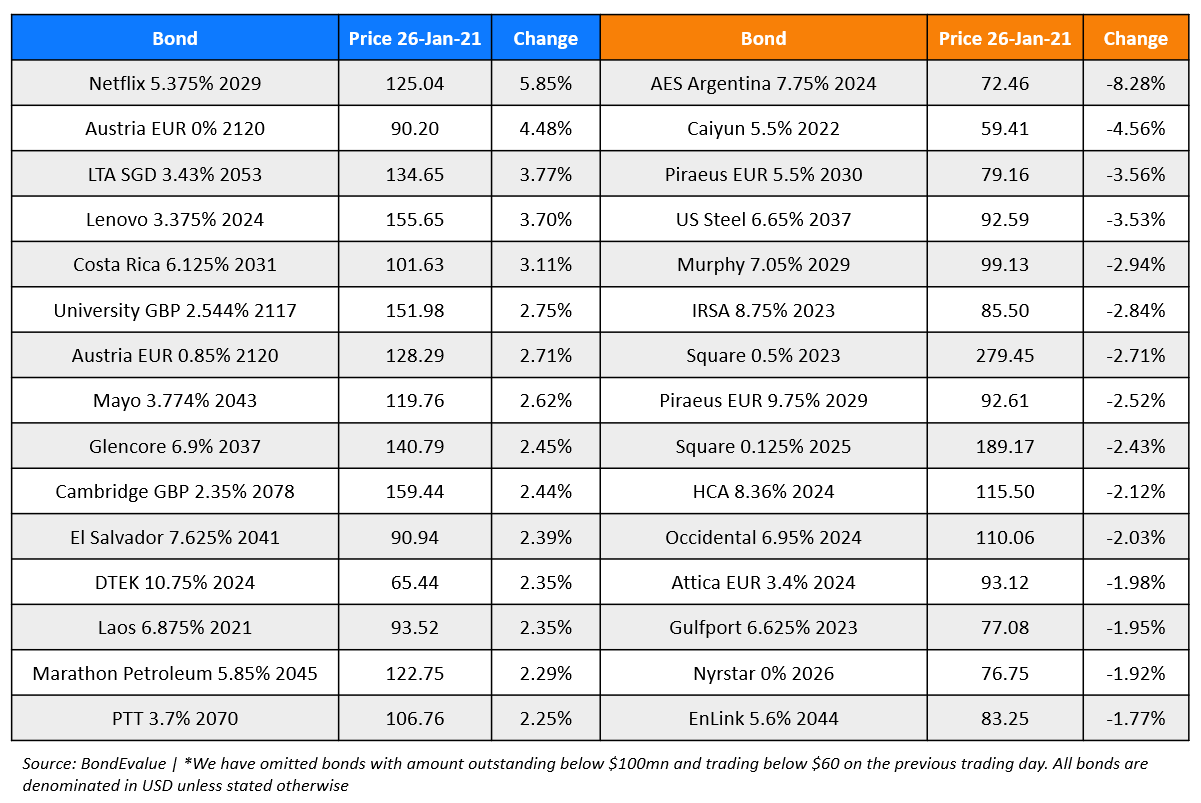