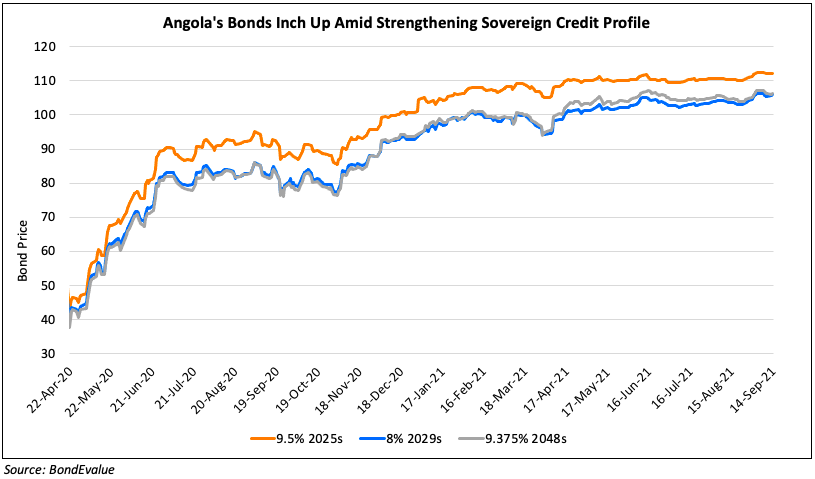 The Republic of Angola has received an upgrade to B3 from Caa1 with a stable outlook from Moody’s as there has been an improvement in its sovereign credit profile driven by stronger governance. The African nation’s fiscal metrics as well as liquidity and funding risks have improved with the upward movement in the oil prices and due to the stable exchange rate of the Angolan Kwanza (AOA). The foreign currency long-term senior unsecured ratings, and the senior unsecured MTN program ratings have also been upgraded to B3/(P)B3 from Caa1/(P)Caa1 respectively. The rating agency however cautioned that the government still holds a high debt burden “which remains vulnerable to renewed episodes of kwanza depreciation, a renewed oil price shock or a more rapid global transition to low carbon than Moody’s currently assumes.” The government’s debt-to-GDP ratio is expected to be 95% in 2021, reducing to 80% in 2023 and to 60% by 2025 vs. 122% in 2020 primarily due to the higher oil prices. The non-oil economy is also set to contribute ~3% to the nation’s growth over the next few years. The newly introduced VAT that replaced an old consumption tax is expected to account for ~10% of revenues in 2021 from 5% in 2018. As a result, the interest payments-to-revenues ratio is set to decline to around 20% in 2025 from 32.6% last year. The government also managed a significant reduction to the tune of ~$2.5bn in 2020 in external debt through negotiations with some bilateral lenders. It also gained a financial support of $750mn through IMF, adding to the drawdown of $1.5bn from the Sovereign Wealth Fund (SWF). The rating agency said, “While Angola will continue to benefit from debt restructuring by some bilateral lenders in 2021 and 2022 (for an estimated $4.5bn over the period), the return to fiscal surpluses and significant steps to pay down short-term debt in the last few years lower government borrowing requirements (GBRs) to below 10% of GDP, broadly in line with the average of B3-rated peers at 13.7% of GDP.” The nation is rated CCC by Fitch and CCC+ by S&P.