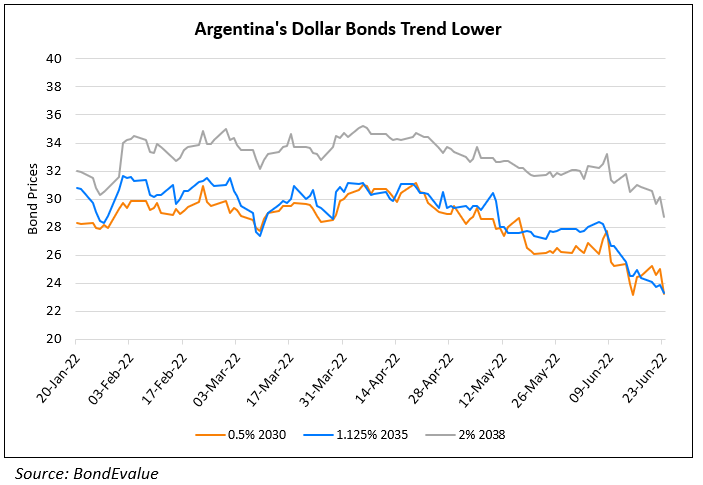 Argentina’s sovereign bonds dropped to record lows, continuing its 2 week descent. Their dollar bonds due 2030 have slipped to ~23.5 cents on the dollar, the lowest since its issuance two years ago. Based on a JPMorgan index, spreads over the US Treasury yields have also widened drastically by 280bp to 2200 points, Bloomberg notes. The news agency reported that the South American nation’s rapid growth in inflation has been the driving force of the government’s ballooning debt burden, because it has significantly pushed up the costs of servicing its debt. Simultaneously, foreign currency reserves have fallen to $32bn from over $35bn at end-2021 and the peso has weakened over 17% YTD. Besides, fears of a recession looming after the Fed’s rate hikes have seen investors selling off their risky assets globally as evidenced by weekly outflows across equities, High Yield funds and even Investment Grade funds. Citi analysts Fernando Jorge Diaz and Ivan Stambulsky said, “A 1980s-style spiraling of inflation is a real risk for the Argentine economy, and the probability attached to it is rising”.

Separately, Argentina exchanged 60% of its local debt obligations due in June for new notes maturing later this year. Bloomberg notes that the exchange is for about ARP 358bn ($2.9bn) in local securities which might substantially relieve the government’s debt load.