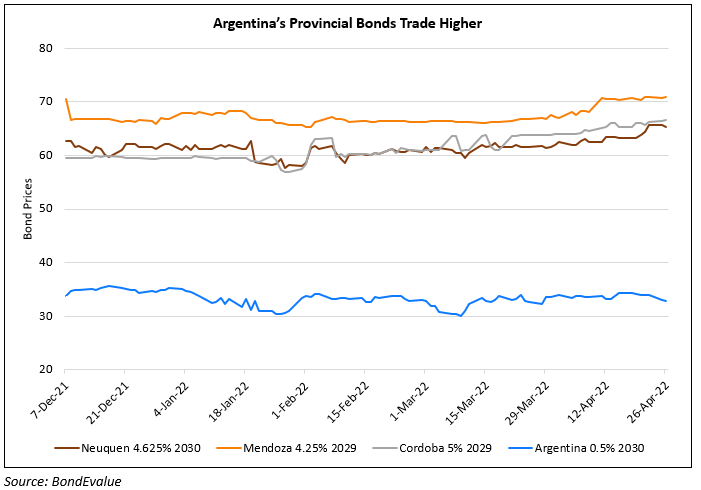 Dollar bonds of Argentina’s provinces like Cordoba, Neuquen, Mendoza and Chubut are among the top gainers in April and in Q1, outperforming the sovereign government’s dollar bonds. In Q1, some of the provincial bonds rallied about 13% while the government bonds were down 4.8%. With the upward move, provincial bonds now yield lower than the sovereign, indicating lesser risk. Bloomberg notes that while Argentina has defaulted in the recent past, the provincial bonds are amortizing (Term of the Day, explained below), making them a more suitable choice for investors. “History shows that provincial defaults only happen after the sovereign defaults, not before. So it made no sense for provinces to have a higher, steeper probability of default than the sovereign”, said Juan Manuel Pazos, an analyst at TPCG Valores. Analysts note that it is all but certain that Argentina will default after 2024 as debt payments are due to rise markedly. But even if a default is unavoidable, the provinces have a track record of offering better restructuring terms than the sovereign. This was exemplified by the the restructuring two years ago where the sovereign’s bonds were at 55 cents on the dollar while some provinces were at ~80 cents on the dollar post restructuring.