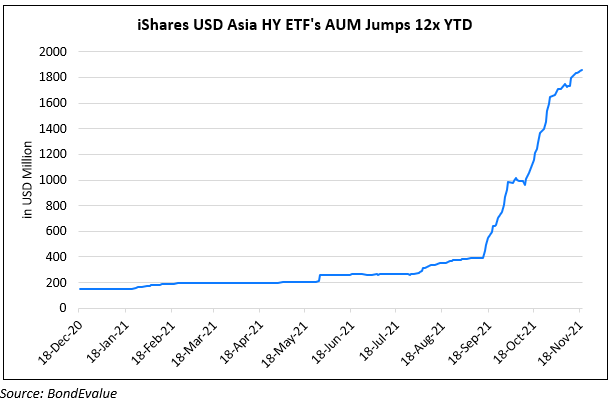 The iShares Asia high yield bond index ETF has seen record inflows over the last three months, with its assets under management (AUM) increasing from $383mn to $1.86bn. October alone saw the fund attract a record $773mn. This comes despite the negative sentiment in the Chinese property sector, hurting developers’ bonds ever since the Evergrande saga began. The ETF is down 10.6% YTD after 2020 and 2019 saw gains of 4.8% and 13.6%. Bloomberg notes that ~29% of the ETF’s holdings are in real estate, including bonds by Evergrande, Sunac and others whose bonds have dropped considerably. Investors including the likes of Allianz Global Investors and Axa Investment Managers say they plan to increase holdings, alongside Goldman Sachs Asset Management and Oaktree Capital Group that have already tapped into the ETF. “We have begun to buy a few higher quality, lower price bonds for our global portfolios, reducing a long term underweight”, said David Newman, CIO of global high yield at Allianz Global Investors.