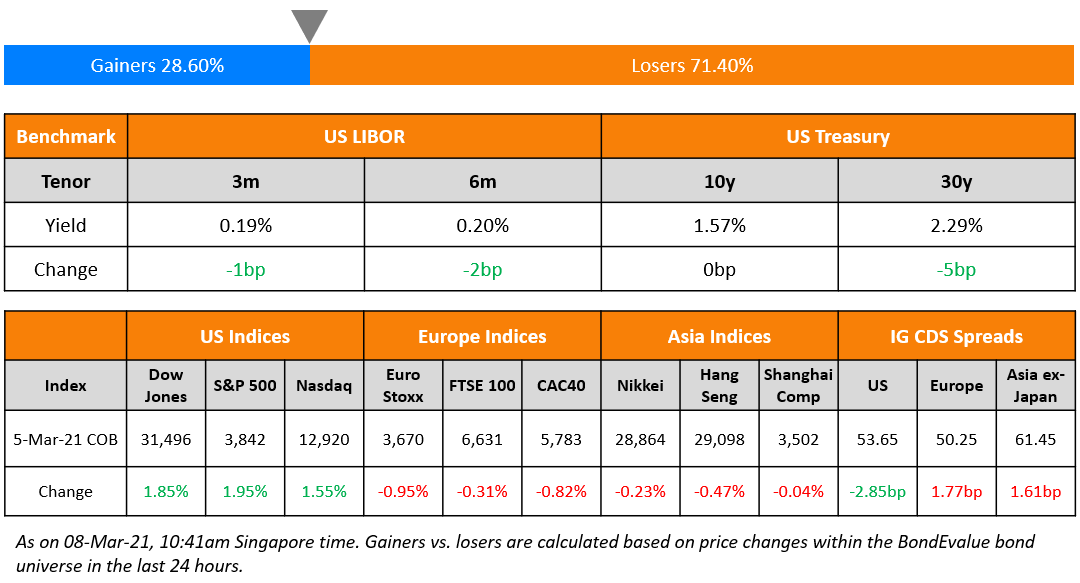 Equities saw a volatile day on Friday but ended higher with the S&P up ~2% and Nasdaq up 1.6%. US 10Y Treasury yields shot up to 1.62%, breaching last week’s high after non-farm payrolls came at 379k for February, almost double the forecasts. The 10Y yield later eased slightly to close at ~1.57%. On Saturday, the US Senate passed the $1.9tn Covid relief bill with a 50-49 vote. Meanwhile, oil prices jumped over $70/bbl after Saudi said its energy facilities had faced drone attacks on Sunday. European equities were lower with FTSE down 0.3%, CAC and DAX down 0.8% and 1% respectively. US IG CDS spreads were 2.9bp tighter and HY was 11.3bp tighter. EU main CDS spreads were 1.8bp wider and crossover spreads widened 6.8bp. China’s exports surged during January and February, up 60.6% YoY with Bloomberg noting increased demand for medical equipment and WFH devices and from trading partners like US and EU. Asian equity markets have opened mixed and Asia ex-Japan CDS spreads were up by 1.6bp. 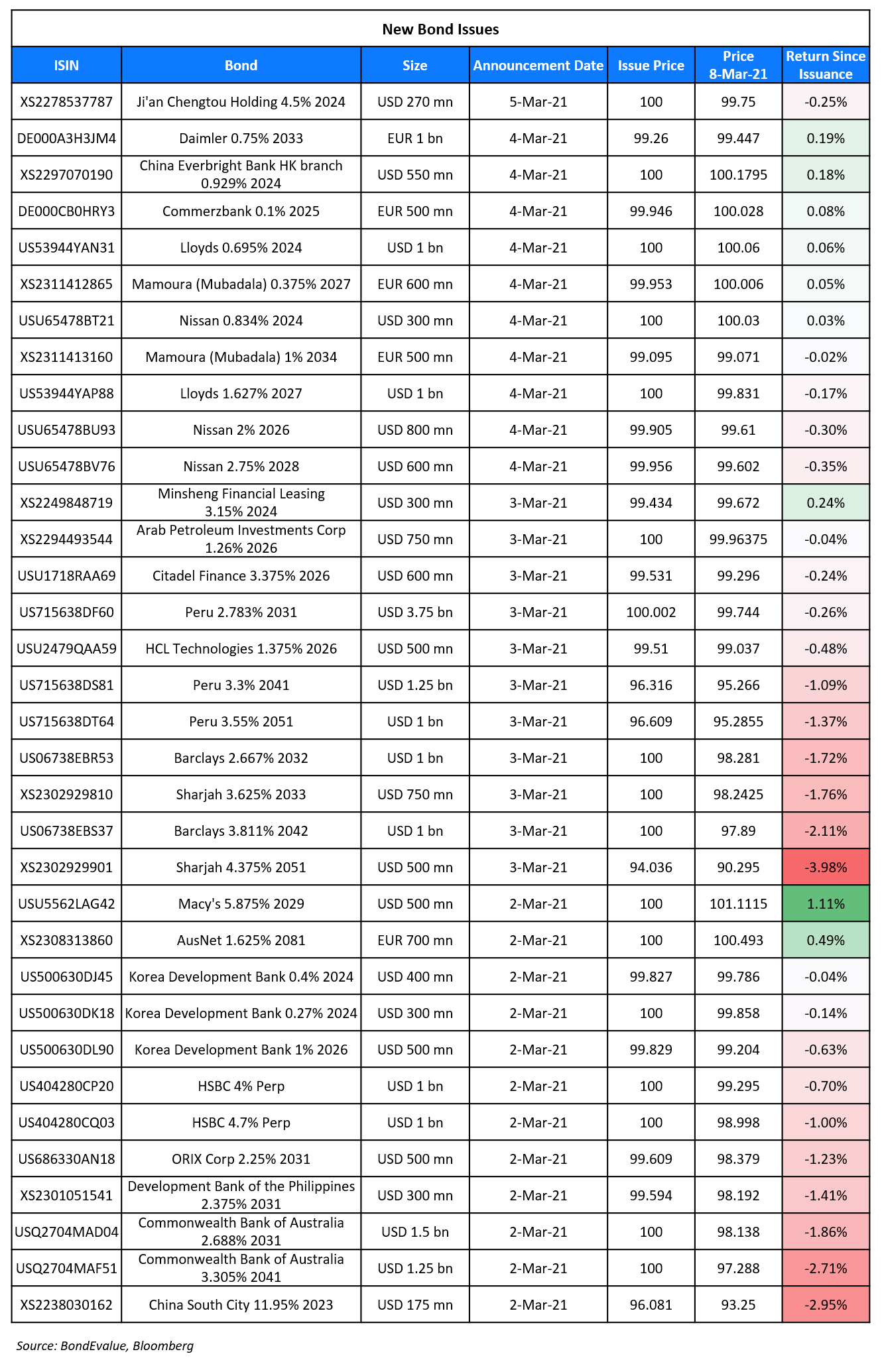 Ji’An Chengtou Holding raised $270mn via a 3Y bond at a yield of 4.5%, 30bp inside initial guidance of 4.8% area. The bonds have expected ratings of BBB-, in-line with the issuer. Proceeds will be used for debt refinancing, working capital and to fund onshore projects. The issuer is a local government financing vehicle of the Ji’an municipal government in the Jiangxi province. The company’s business is in land development, infrastructure construction, property development and concrete production. 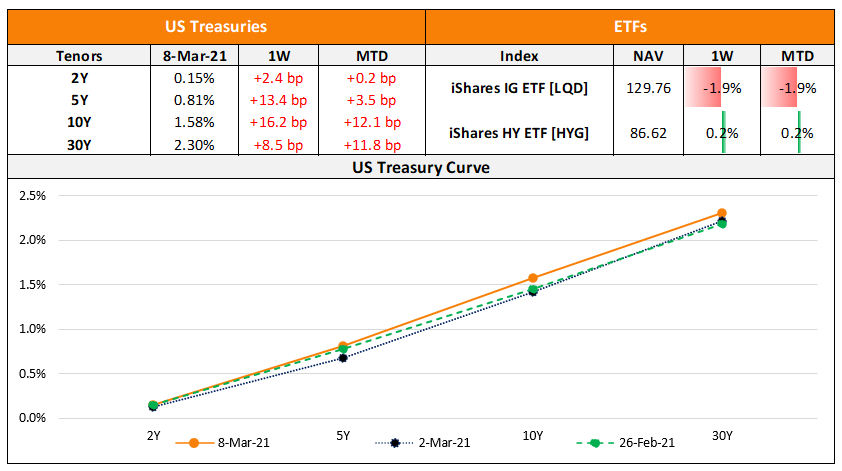 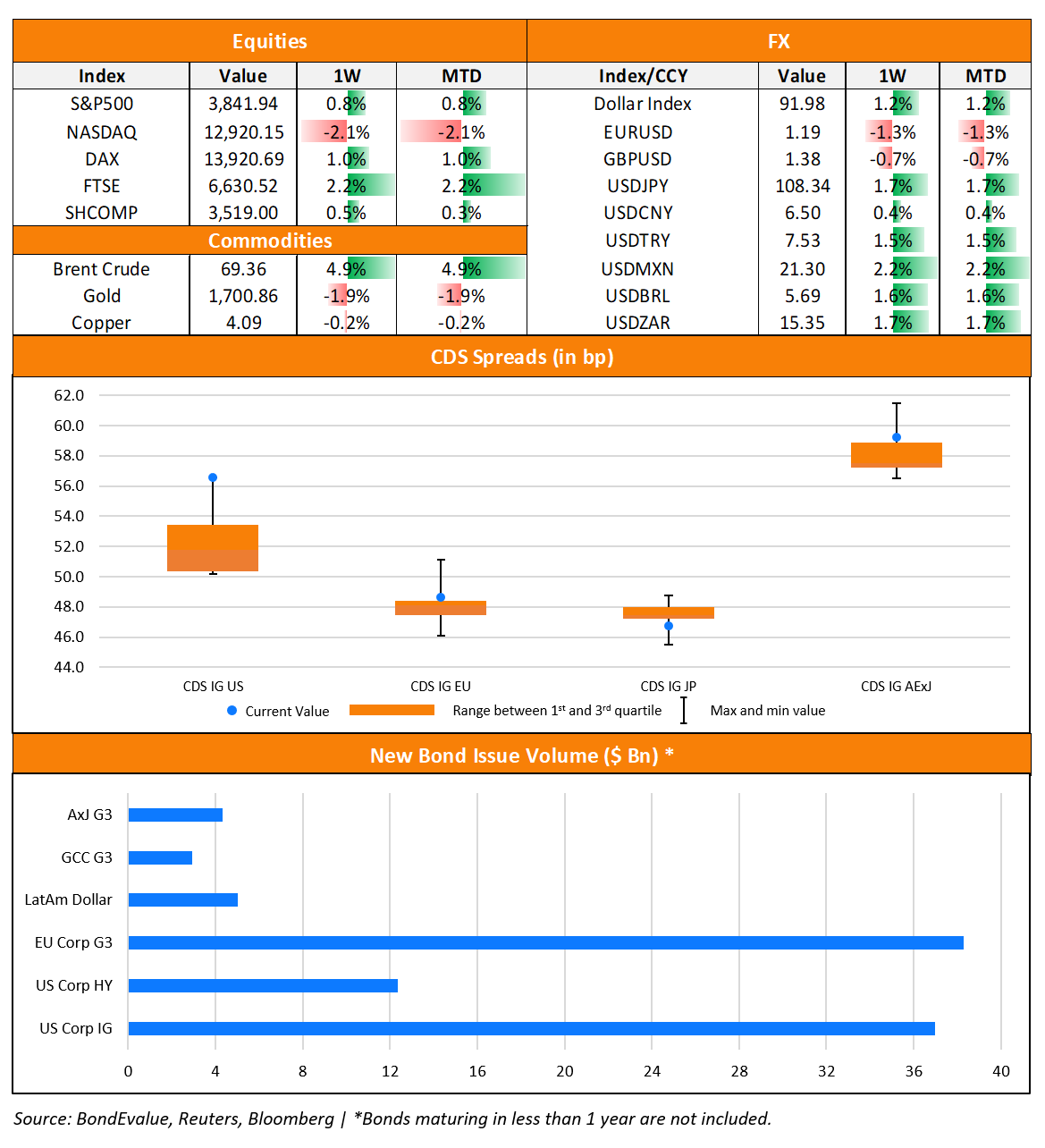 US primary market issuances stood at $49.5bn, up 54% vs. $32.2bn the week prior. The rise in issuance can be attributed to IG deals with issuance of $36.97, up 88% WoW while HY was flat WoW at $12.4bn. The largest deals were in the IG space led by Goldman’s $3bn new 2027s that were part of an overall $7bn issuance, followed by Cigna Corp’s $1.5bn and Marriott’s $1.1bn issuance. Also, Bloomberg reports that HY issuance has crossed $100bn YTD/QTD with over three weeks left till quarter end, breaching the previous first-quarter high of $94.6bn set in 2012. In North America, there were a total of 44 upgrades and 57 downgrades combined, across the three major rating agencies last week. LatAm saw $5bn of deals last week vs. $700mn in the week prior, up over 7x, Peru’s three-tranche $4bn issuance leading the way followed by Minerva’s $1bn deal. EU Corporate G3 issuance saw a two-fold increase last week to $38.27bn vs. $19.2bn priced in the week prior – KfW’s €5bn ($5.96bn) was the largest single deal followed by Siemens’ $1.5bn issue that was part of an overall $10bn offering and Enel’s €1.25bn ($1.5bn) deal. GCC and Sukuk issues were at $2.92bn vs. $2.39bn in the week prior led by the Emirate of Sharjah and Mubadala raising $1.25bn and €1.1bn ($1.3bn) respectively. APAC ex-Japan G3 issuances were relatively muted with $7.8bn in new bond deals vs. $11.9bn in the prior week. CBA’s two-tranche $2.75bn led the table followed by AusNet’s €845mn ($1bn), China Everbright’s $550mn. KDB, DBS and HCL Tech were next in the list at $500mn each with HCL’s debut issuance emerging as India’s tightest and highest rated issuance. In the region there were 3 upgrades and 3 downgrades combined, across the three major rating agencies last week.

Asset Backed Securities (ABS) are securities that are collateralized or backed by a pool of assets. This pool of assets are made by a process of securitization and could be in the form of loans, credit card debt, mortgages etc. with each security backed by a fraction of the total pool of underlying assets. Thus, an investor gets interest and principal payments while also assuming the risk of the underlying assets. The underlying pool of assets are structured in different tranches with the highest priority of repayment going to the top tranche and then to the second tranche and so on. Temasek backed Astrea VI announced guidance for a $643mn equivalent dual-currency ABS offering this morning that is backed by private equity funds. As per IFR, the Class A-1 10NC5 tranche must be called if they have a sufficient cash buffer to redeem all Class A-1 notes and if not called, would have a one-time coupon step-up of 100bp.

”It’s not matching up right now that we need to be more dovish than we already are,” Bullard said. “Something panicky would catch my attention, but we’re not at that point,” he said.Loretta Mester, Cleveland Fed President

“To make sure that the post-vaccination recovery becomes broad-based and sustainable…from my point of view on policy, I think that’s going to take sustained accommodation from the Fed for some time,” she said.

Raphael Bostic, Atlanta Fed President
“We’re ready and able…to support the recovery as long and as strongly as necessary,” he said. “We need to do all we can to minimize the long term damage from the pandemic crisis and to make sure that the recovery is as broad based and as inclusive as possible.” “Inflation has not been a real stress point in terms of the economic performance for quite a long time,” Bostic said.

On Libor to cease for most currencies by end of 2021

Andrew Bailey, governor of the Bank of England

“Today’s announcements mark the final chapter in the process that began in 2017, to remove reliance on unsustainable Libor rates and build a more robust foundation for the financial system,” said Bailey.

Market participants had “the knowledge that viable fallback rates will automatically apply in their outstanding Libor derivatives contracts if transition efforts aren’t complete by the time the various Libor settings cease”, he added.

On the mix of US stimulus, faster reopening and greater consumer firepower positive for the dollar but a drag for bonds – Athanasios Vamvakidis, BofA analyst

“Including the current proposed stimulus package and further upside from a second-half infrastructure bill, total U.S. fiscal support is six times greater than the EU recovery fund,” he said. “The Fed is also supportive with U.S. money supply growing two times faster than the Eurozone.”

“All fixed-income assets face a challenging market as rates and inflation become more of a threat,” he said. “Emerging markets are no different. We have already seen outflows from emerging-market fixed-income funds, and I suspect that will continue in the near term.”

“There’s a lot of tinder being put now on this fire for higher yields,” said Kerins. “The question is what is the point that higher yields are too high and really put pressure on risk assets and push Powell into action” to try and tamp them down.

“There’s definitely that momentum, but the question is how well risky assets adjust to the new paradigm,” said Rajappa. “We’ll be watching next week, when the dust settles after the payrolls data, how Treasuries react and how risky assets react to the rise in yields.”

On stimulus-fueled risk bounce likely to come with higher yields

“The House and Senate plans still have to be reconciled before the bill becomes law, but financial markets will focus on the large headline number in the Senate’s version on Monday,” he said. “The news is likely to put upwards pressure again on yields at the start of the week as the Biden administration’s $1.9 trillion proposal is close to being passed in full, rather than being reduced as earlier expected.” “If Bailey signals the BOE is willing to start slowing down its quantitative easing, then global bond yields will rise as the BOE will be the second major central bank after the Fed not to push back on rising yields,” he said.

“To me the number one thing to focus on for broader markets is real yields,” said Stein. “Nominal yields matter, but real yields are really what is driving things across financial markets.” “I still believe we have the conditions in place to see dollar weakness,” Stein said. “However, if U.S. Treasury yields continue to sell off and particularly at a pace and with the volatility we have seen recently, the weaker dollar trade will be challenged.”

“Specs piled into shorts across the curve last week as the market became agitated on Fed tapering and early hiking risks,” Zhao wrote. “Dealers and levered funds were net buyers, while asset managers and other investors are net sellers.”

On US stocks climbing and Treasuries gyrating after bumper jobs report

“We are not looking for rates to shoot dramatically higher from current levels,” she said. “But the risks for interest rates are on the high side.”

Ralf Preusser, global head of rates research at Bank of America
“With the Fed, crucially, not yet showing signs of being intimidated by the bond market, the sell-off in rates risks extending,” said Preusser.

Joost van Leenders, senior investment strategist at Kempen Capital Management
“It looks like words are not enough,” added van Leenders. “There’s still a lot of unrest with rising yields . . . historically rising yields aren’t bad for equities, the reason why it’s different this time is a lot of equities have high valuations, which are justified by low yields.”

Iris Pang, chief economist for Greater China at ING
“This makes me feel uneasy as I don’t know what exactly the government wants to tell us about the recovery path it expects,” said Pang.

“They appear to have essentially sold all they have bought so far this year,” said Loo.

According to an analyst at a US brokerage

“Some banks were mainly buying short-term bonds, assuming they will be stable because of the Federal Reserve’s policy commitment. But even five-year bonds came under pressure.”

“China is obviously a really big issue at the bank and there is significant tension between that fact we need China and a good relationship with its authorities, versus the brand promise ‘here for good’.” “If you have a business that is geared to China, how do you approach the Uighur muslims, US-China geopolitics, the belt-and-road colonialist debt trap and Hong Kong, while being a bank that espouses ESG values?” “How do you make that fit? We have been spinning the wheels trying to work it out — without success.” 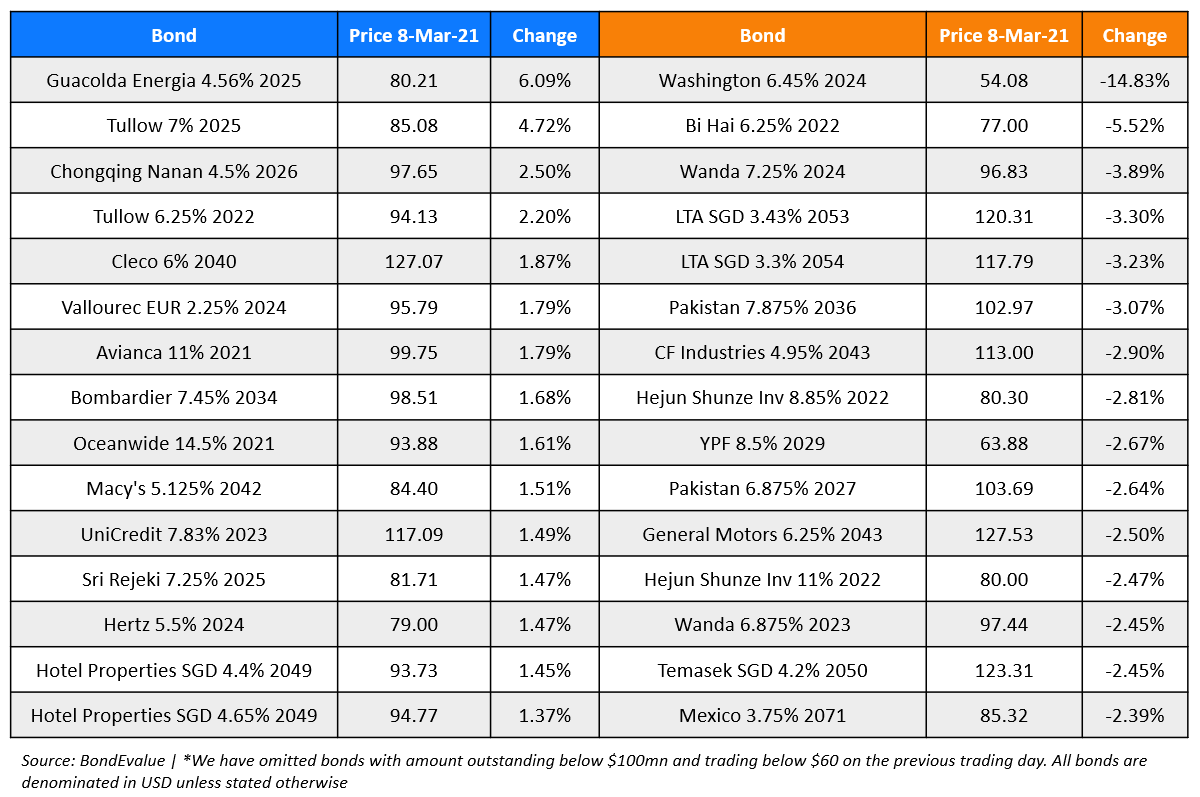