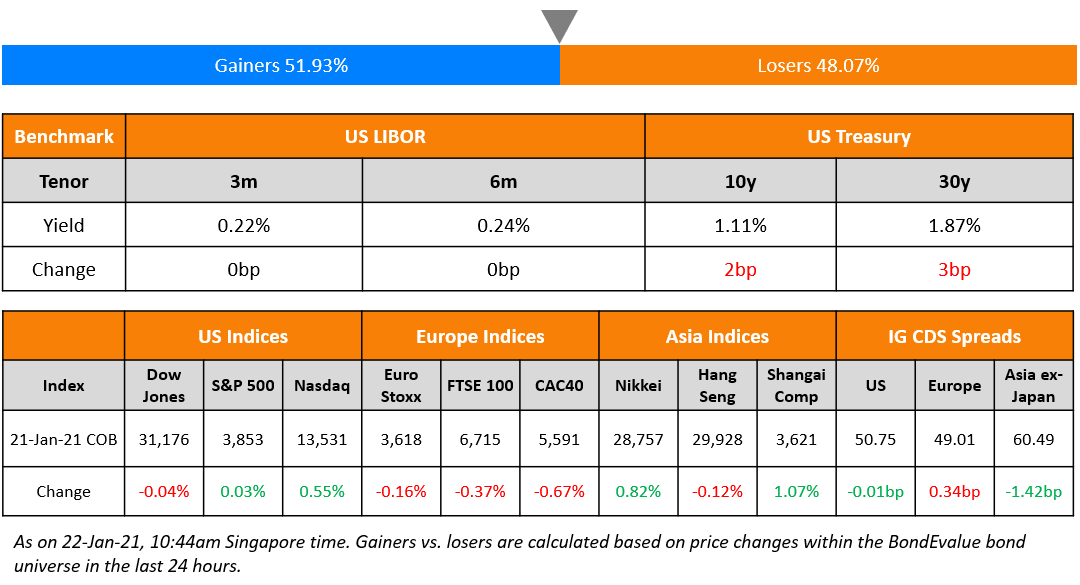 S&P ended the day flat while Nasdaq was up 0.6% with Apple up 3.7% and Facebook up 2%. US 10Y Treasury yields were 2bp wider. US jobless claims for the prior week improved, printing at 900k, a fall of 26k. US Philly Fed Manufacturing exceeded expectations with a 17.4 point jump to 26.5. Also, US House speaker Pelosi said they will be ‘completely ready’ to pass Biden’s $1.9tn coronavirus relief bill by February 1. The ECB kept its policy rates and stimulus unchanged. FTSE, DAX and CAC fell 0.4%, 0.1% and 0.7%.  US IG CDS spreads were flat and HY was 1.7bp wider. EU main and crossover CDS spreads widened 0.3bp and 2.9bp respectively. Asia ex-Japan CDS spreads tightened 1.4bp and Asian equities are off to another positive start, up ~0.7% today. 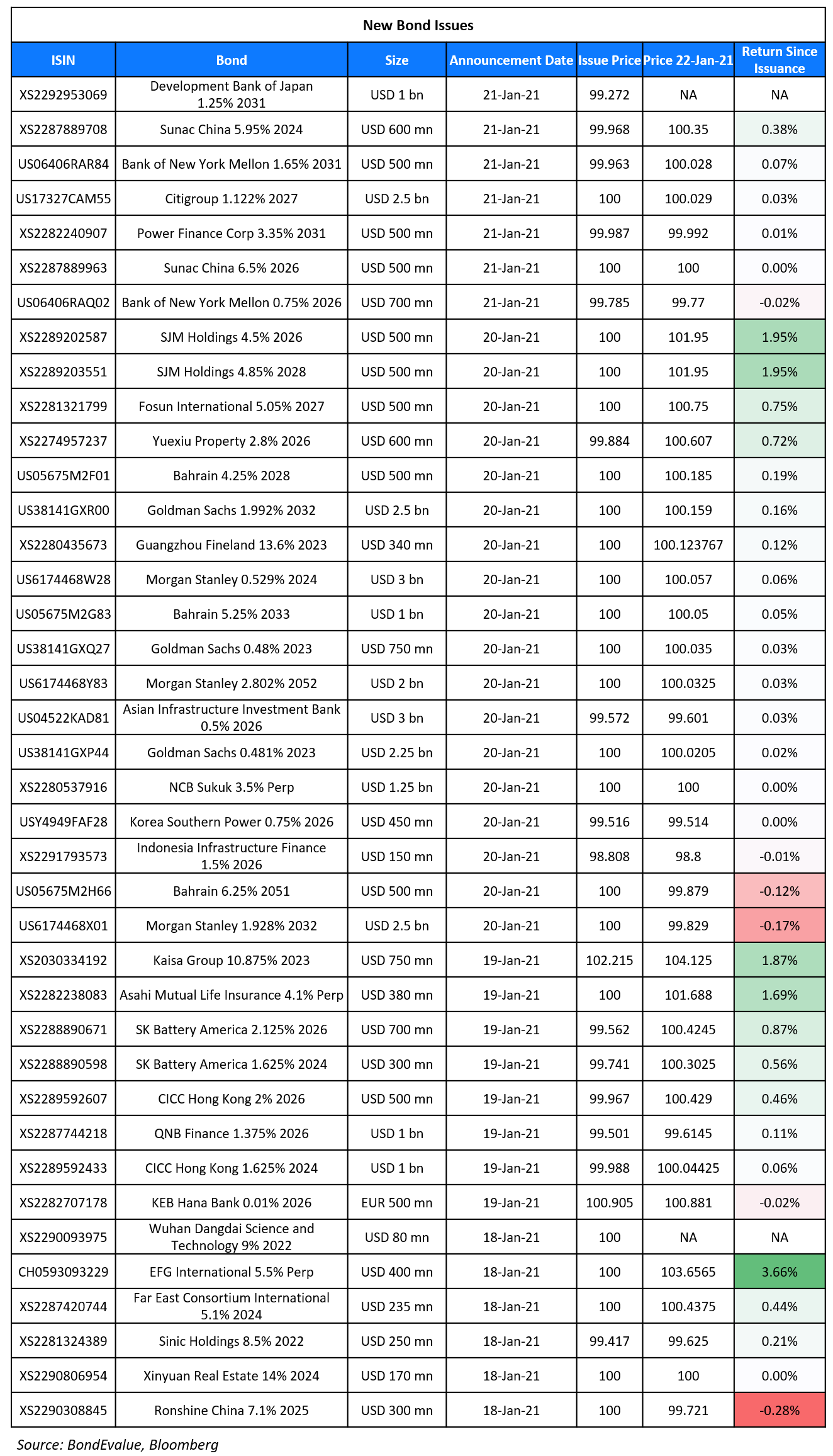 Mongolian Mortgage pulled its proposed dollar 3Y bond after the country’s Prime Minister and most of his cabinet resigned following protests. The deal was pulled after the company released final guidance, which was unchanged from initial guidance of 9.125%.

Panda bonds are renminbi denominated notes sold by a non-Chinese issuer in onshore China. The first of its kind was issued by the IFC and ADB in 2005. While these bonds attract Chinese investors, they have also gained traction from international investors. It also helps issuers diversify investor bases and reduce currency risk. ADB today has hired banks for a Panda bond issuance.

“Risks surrounding the euro-area growth outlook remain tilted to the downside, but less pronounced,” she said. “The roll-out of vaccines, which started in late December, allows for greater confidence in the resolution of the health crisis.” “We believe fiscal support has to be continued,” she said. “The slight qualification we would have is that we certainly recommend it is as targeted as possible and temporary, given that we all

hope for recovery during the course of 2021, probably in the second half more than the first half.”

“Markets are celebrating the idea of out with the old,” said Roe. “The concept of a United States that isolates itself and does not care about issues that matter globally is being reversed very rapidly and that is good for international co-operation, international law and international trade.”

“When investors are concerned about global growth, they go to the safety of the US government bond market and the dollar,” said Olu-Pitan. “When people are feeling more optimistic about the world they buy the [Brazilian] real or the [South African] rand.”

“At some point we move into a world where vaccines take hold, Covid is less of a near-term issue and the Fed will be increasingly talking about tapering its purchases,” Harrington said. “The way this is communicated will be the biggest risk to the emerging market call.”

“We have too much cash chasing too few assets,” said Kelly. “So the strong demand for duration is just part of that overall chase.

“Anything that has the slightest yield is great news,” said Christiansen. “The fact that investors are seeking longer duration in a hunt for yield just shows that markets can’t get enough.”

“The interest is of course coming from issuers in ‘transition’ industries, particularly energy and agriculture, but also encouragingly from regulators and policy makers who see this as a way to increase sustainable finance in support of environmental policies directed towards the Paris goals,” said Kapasi.

On the significance of rising bond yields

“While the dollar is still expensive on an absolute basis relative to other currencies, the steepening in the U.S. yield curve… makes the dollar start to look a little bit more attractive,” said Browne.

There has been “on average about a 10 basis point increase on the most competitive rates,” said McBride. “The jump in the 10-year has increased the yields that investors are requiring to purchase mortgage-backed securities.” 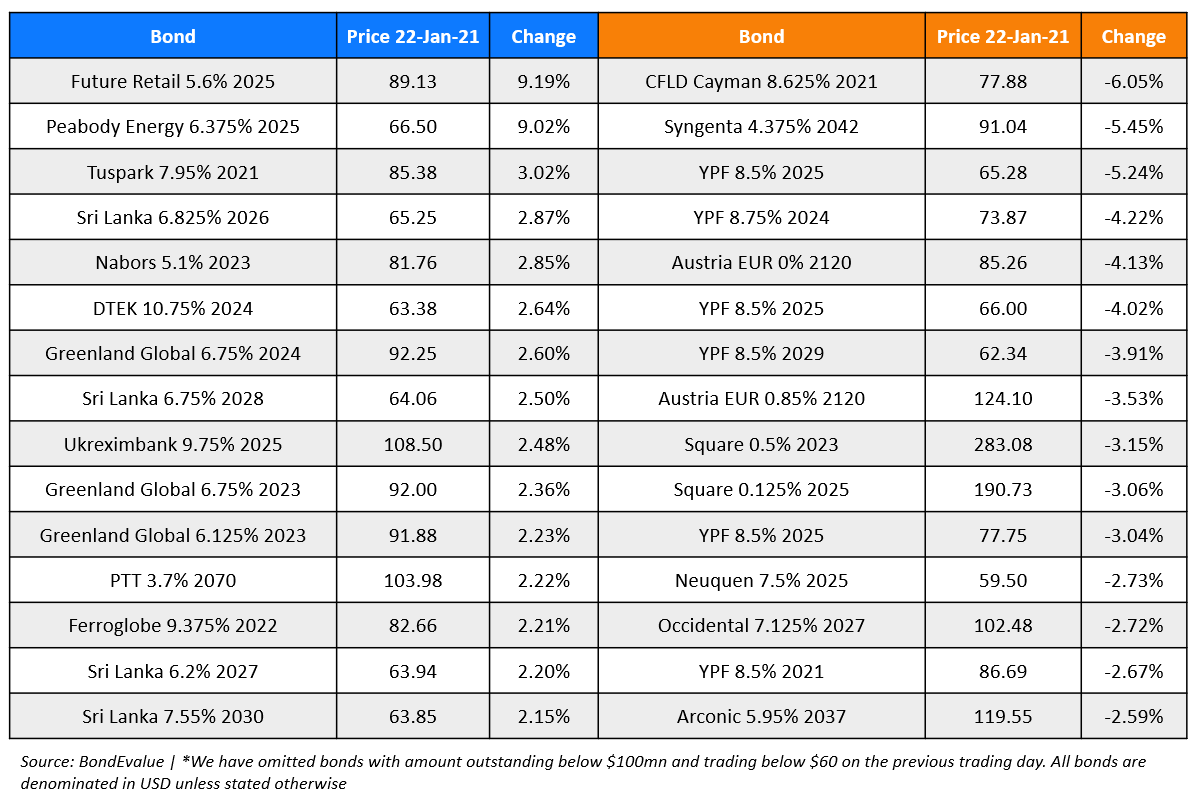 Ratings are in the order of Moody’s/S&P/Fitch