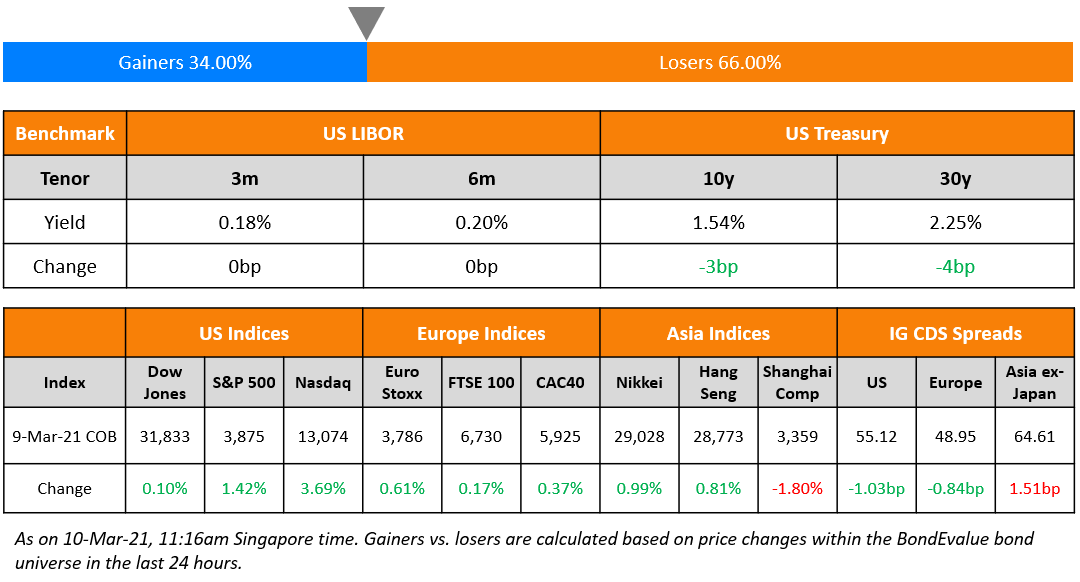 US equities rebounded on Tuesday with the S&P up 1.4% and the Nasdaq 3.7% higher. Tesla jumped 19% higher after upbeat China car sales data. US 10Y Treasury yields eased to 1.53%. European equities were more muted with the DAX and CAC up 0.4% while the FTSE was up 0.2% with Eurozone GDP shrinking 0.7% QoQ in Q4, down 4.9% YoY. US IG CDS spreads were 1bp tighter and HY was 2.6bp tighter. EU main CDS spreads were 0.8bp tighter and crossover spreads tightened 4bp. Primary markets in Asia remain relatively quiet despite many deals in the pipeline. Asian equity markets are up 0.5% and Asia ex-Japan CDS spreads were up by 1.5bp. 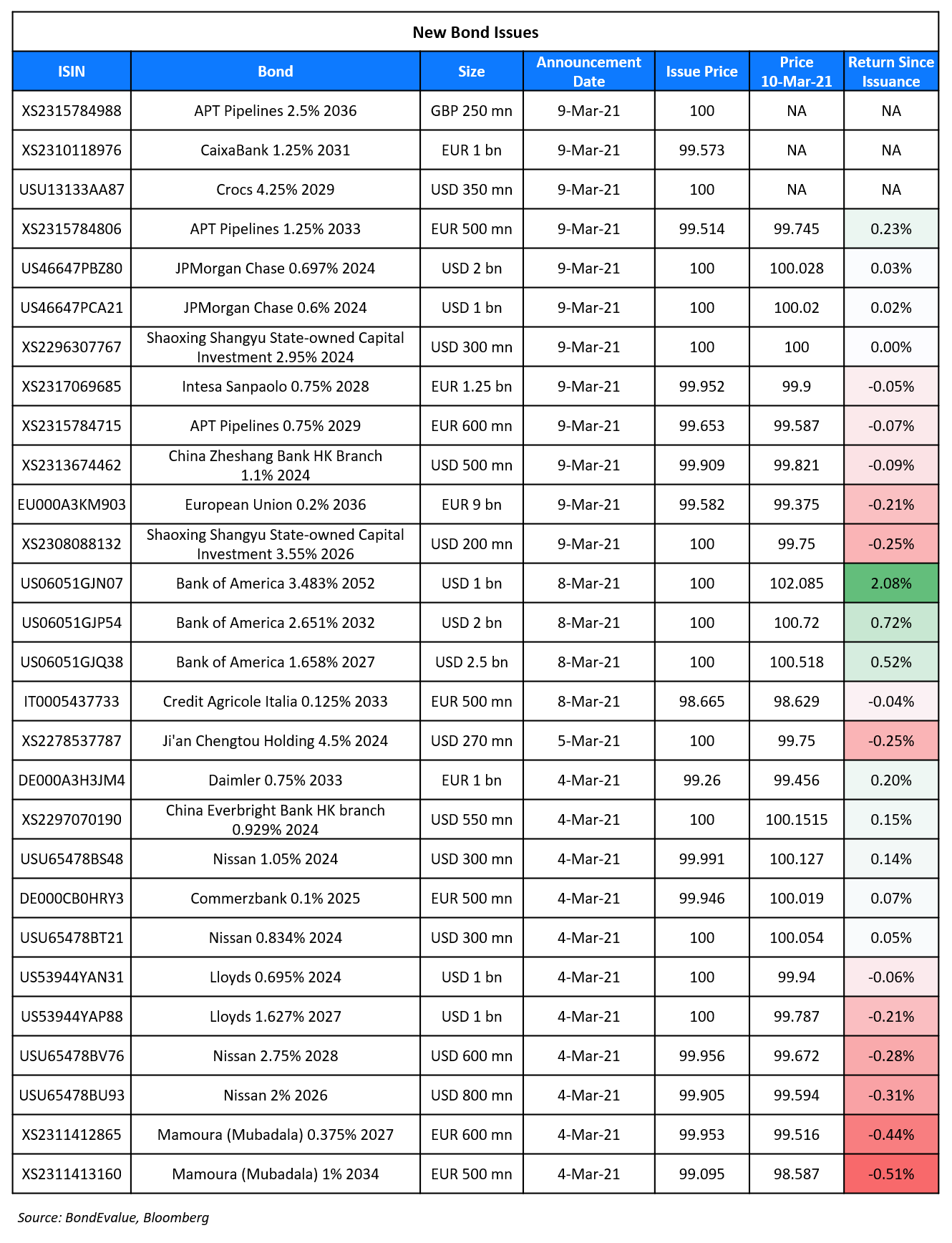 JPMorgan raised $3bn via a two-part issuance. It raised:

Proceeds from the SEC-registered bonds will be used for general corporate purposes.

Shoe maker Crocs raised $350mn via a debut 8Y non-call 3Y (8NC3) bond at a yield of 4.25%, or T+300bp, 25bp inside the wide end of initial guidance of 4.25%-4.5%. The bonds have expected ratings of B1/BB-. Proceeds will be used to repay up to $180mn of outstanding borrowings under Crocs’ revolving credit facility and the rest for general corporate purposes.

China Zheshang Bank Hong Kong branch raised $500mn via a 3Y bond at a yield of 1.131%, or T+80bp, 40bp inside initial guidance of T+120bp area. The notes have expected ratings of BBB- and received orders over $2.3bn, 4.6x issue size. The bonds will be issued off the lender’s $2bn MTN programme with proceeds being used for general corporate purposes.

Collateralized Loan Obligations (CLO) are securities backed by a pool of underlying loans. The loans are packaged together by a process of securitization. The loans are bundled together in tranches in an order of risk – for example, the AAA rated tranche comes with the lowest default risk while a BB tranche has a higher default risk. Investors can choose the tranche they prefer based on risk appetite. Given that the underlying loans are floating rate loans, they are also considered a hedge against inflation. Bloomberg reported that CLO deals hit a record as inflation fears have fueled a bond rotation trade.

On the possibility that the US bond sell-off could be overdone – Marc Seidner, PIMCO’s chief investment officer for non-traditional strategies

“The extent of the bond market sell-off in early 2021 suggests inflation expectations may have run too far, too fast…there may be limitations on how much further yields can climb for now,” Seidner wrote.

“Longer-term, the real cost of any inaction is the credibility of the policy framework,” Searle said. “Investors may think twice about buying record issuance if the ECB allows confusion about its aims to fester.”

“The numbers still don’t suggest that the ECB is aggressively leaning against U.S. spillovers into Europe’s long end,” Rieger said. “The ECB seems to be quite anxious about its data sending the wrong signals.”

On US yields falling as market turns to 10-year, 30-year auctions

According to Action Economics LLC

“The relatively solid 3-year sale brought a big sigh of relief to the Treasury market and yields are moving back down to or near their richest levels of the day.” “After the dog of a 7-year sale, there were fears developing that demand for Treasuries is eroding. But this sale dispensed with that notion, at least for today.”

“This the first time since the last few hours of February that we’ve had four consecutive four-hour periods of stronger prices in the Treasury market,” said LeBas. “So there’s a good amount of oomph behind the move in prices.” “The auction will probably be a time to close the shorts because the cost of shorting on-the-run 10s are pretty high,” he added.

“Emerging markets Asia is attractive from a relative value perspective,” said Sambor. “We think there is more value in high yield. We think it is fundamentally mispriced,” he said, referring to the cheapness of bonds in markets such as China.

“Given the levels of yields in places like Germany, it doesn’t make sense to hold them in any decent size if the aim is to protect against volatility. For this, we have a positive view on bonds from Korea and China,” said Onuekwusi.

“The Q4 data is already quite old, but it might act as a reminder that the euro zone is going to be a laggard in terms of growth in 2021,” said Bouvet.

“India’s markets are likely to be relatively immune to higher U.S. yields in the weeks ahead,” said Kotecha. “India has been a key beneficiary of equity inflows into Asia and we do not see outflows persisting.” 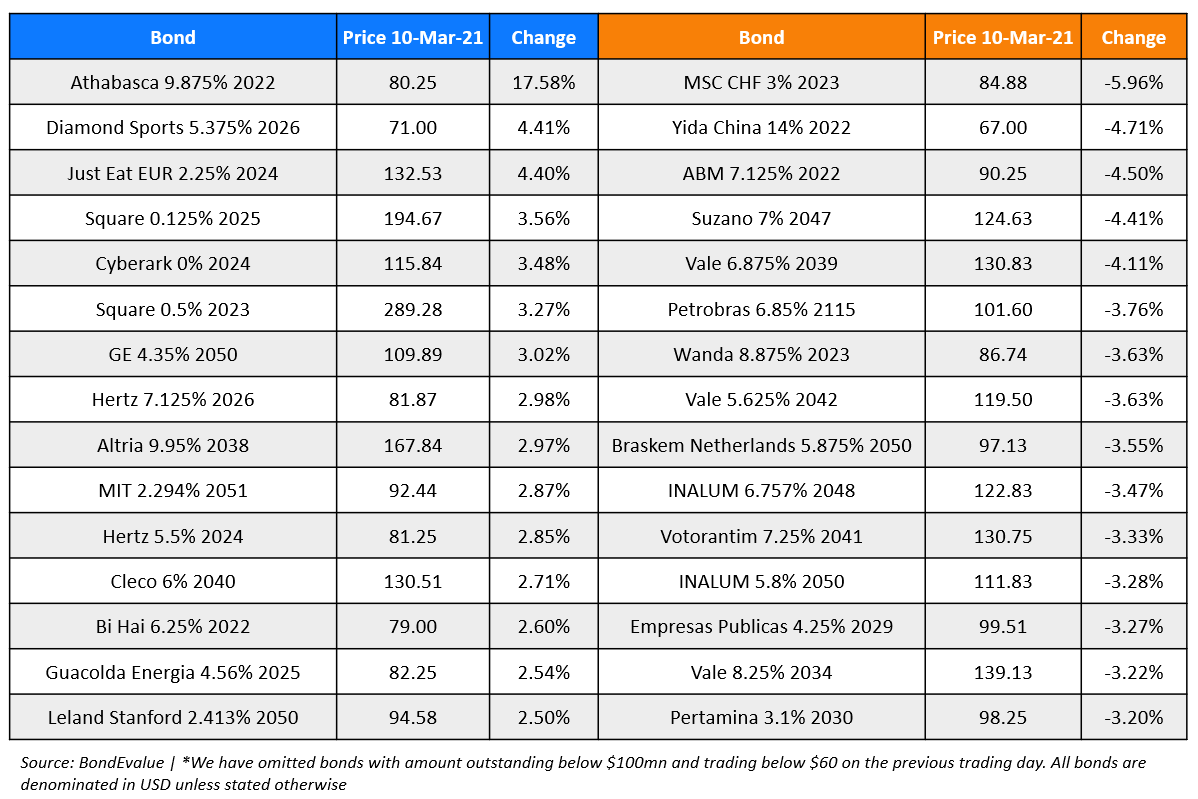