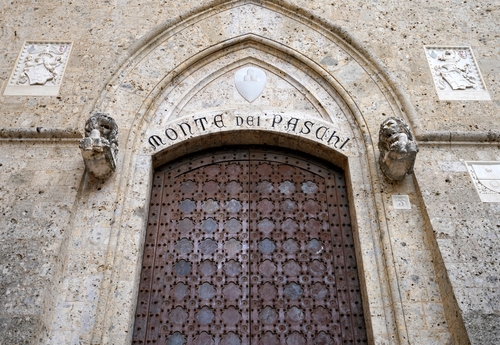 The world’s oldest bank, Italy’s Banca Monte dei Paschi di Siena is looking to raise up to €2.5bn ($2.43bn), ten times its market cap, in a bid to revamp its balance sheet. This follows a state-led bailout and recapitalization of the bank’s capital structure, which included the disposal of billions in bad loans from its balance sheet. The Italian bank will be issuing more than 1.25bn shares at €2/share. Out of the €2.5bn (2.43bn) raise, the Italian government, which owns 64.23% of the bank, will contribute up to €1.61bn ($1.58bn) and the underwriting banks will cover up to €807mn ($790mn). Bloomberg Intelligence notes that while it is too early to assess the likelihood of success for Banca Monte’s revamp, they expect the bank’s consensus CET1 to approach 14%, with the government’s support. That said, BI also acknowledges that the bank has significant exposure to Italy sovereign risk and bail-in risk, with a weak earnings outlook. In light of the planned capital raise, its bonds rallied across the board yesterday.