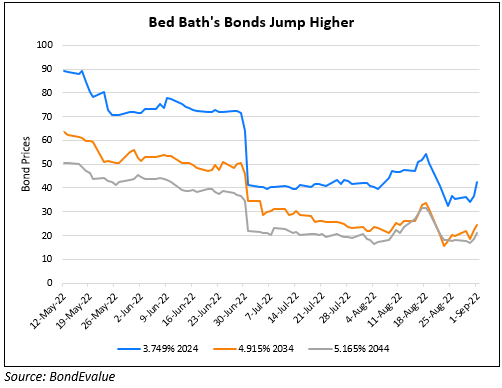 Troubled American retailer Bed Bath & Beyond announced a plan to raise money by issuing new shares. It also said that it signed deals worth of $500mn in financing, adding that it would close down 150 of its 953 stores, cut jobs and overhaul its merchandising strategy. Late last week, the company was said to have come close to securing a $370mn loan from investment firm Sixth Street, as per WSJ. The company had forecast a larger than expected 26% fall in its same-store sales for Q2 and said it would retain its buybuy Baby business, which it had put up for sale. Its Q1 sales dropped by 25% and the company reported a $358mn loss at that time. Looking ahead, the retailer said it would cut back on SG&A expenses by $250mn and limit capital spending. While its stock price tumbled over 21%, its bonds saw an uptick of 2.2-5.8 points across its curve.