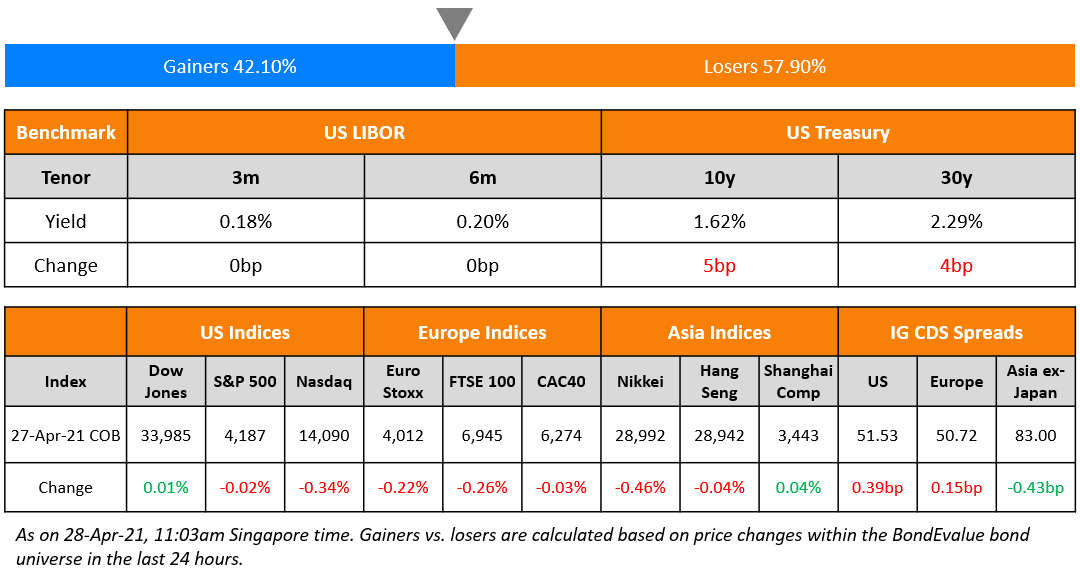 S&P ended flat while Nasdaq fell 0.3% with Tesla dropping 4.5% despite strong earnings. US 10Y Treasury yields were 5bp higher to 1.62% even after a decent 7Y Treasury auction ahead of the FOMC meeting scheduled for later today. European equities were modestly lower with the FTSE and DAX down 0.3% each. US IG CDS spreads were 0.4bp wider and HY widened 1bp. EU main CDS spreads were 0.2bp wider and crossover spreads widened 0.7bp. Asian equity markets are trading mixed today and Asia ex-Japan CDS spreads tightened 0.4bp. 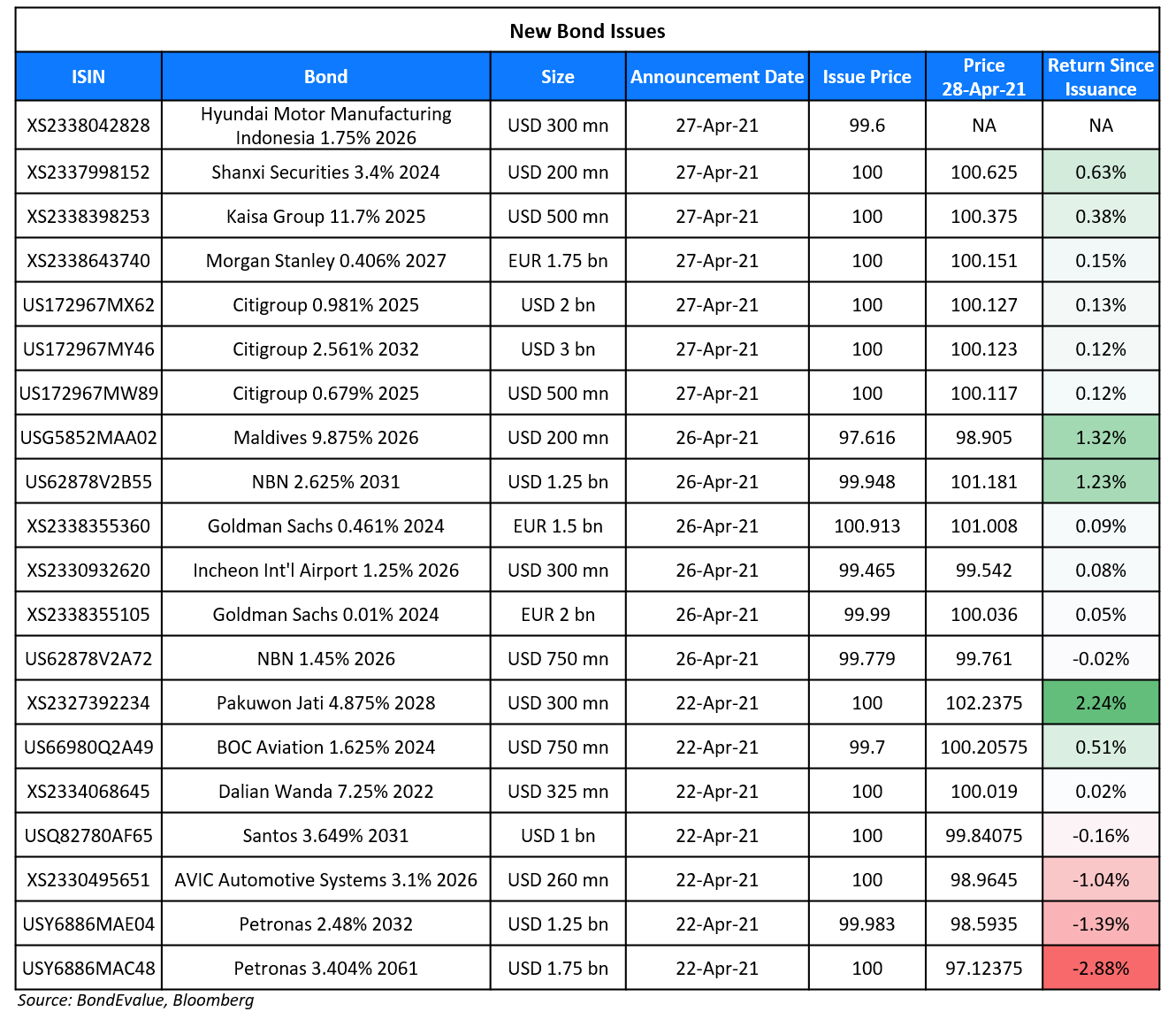 Kaisa Group raised $500mn via a 4.5Y non-call 2.5Y (4.5NC2.5) bond at a yield of 11.7%, 42.5bp inside initial guidance of 12.125% area. The bonds have expected ratings of B2/B, and received orders over $2.7bn, 5.4x issue size. The bonds were issued alongside an exchange offer of their 2024s with proceeds being used for the refinancing of their 9.375% 2024s and other offshore debt. Under the exchange offer, bondholders will receive the new 4.5NC2.5 bonds on a par-to-par basis. Under the tender offer, Kaisa will purchase outstanding bonds for cash at a price to be determined through an unmodified Dutch auction (Term of the Day, explained below). Nomura’s trading desk said in a note that Kaisa’s 2016 restructuring left it with sizeable debt coming due in 2024, and that it has recently received a $1.4bn offshore bond issuance quota that can only be used to refinance its 2024s, as reported by IFR.

Shanxi Securities raised $200mn via a debut 3Y bond at a yield of 3.4%, 35bp inside initial guidance of 3.75% area. The bonds have expected ratings of and received orders over $605mn, ~3x issue size. Proceeds will be used for general corporate funding purposes, including refinancing offshore debt.

Hyundai Motor Manufacturing Indonesia $300mn via a 5Y guaranteed bond at a yield of 1.834%, 35bp inside initial guidance of T+135bp area. The bonds have expected ratings of Baa1/BBB+. Proceeds will be used for general corporate purposes, primarily for the construction of the issuer’s manufacturing plant in Indonesia.

These are public offerings where the price of the offering is determined as the highest price after all bids are taken. For example, US Treasury bond auctions are based on the same principle – the highest price (lowest yield) submitted will be accepted and then move lower down in terms of prices submitted by the other bidders. For example, if the Treasury plans to issue $10bn worth of bonds at a price of $100 and the highest quote by a bidder is at $102, then they will get their full allocation followed by the price at which the next highest bidder bids and subsequently thereafter in descending order till the allocation is completed.

There are also ‘Modified Dutch Auctions’. When an issuer bids to repurchase securities for example, they can use Modified Dutch Auction Tender Offers (MDATOs) – here the issuer sets prices in a falling structure at which a holder can tender the securities. The buying price will be the highest at which the issuer can buy all securities it has offered to purchase, or a smaller amount if there isn’t a tender of all securities. With MDATOs, the issuer pays one fixed price for the tendered securities. Due to this, some holders will receive more than they bid while others will receive less.

Kaisa Group plans to purchase its outstanding 2024s for cash at a price to be determined through an unmodified Dutch auction.

On the Fed likely guessing that US inflation will be “transitory” – Jeffrey Gundlach, CEO and CIO of DoubleLine Capital LP

“I’m not sure why they think they know that it’s transitory,“ Gundlach said. “How do they know that when there’s plenty of money printing that’s been going on and we’ve seen commodity prices going up really massively.” “There’s plenty of indicators that suggest that inflation is going to go higher, and not just on a transitory basis, for a couple of months. So we’ll see how the Fed is trying to paint the picture, but they’re guessing.” “Who’s going to buy all these many trillions of dollars of bonds? Foreigners have been selling for years and they’ve accelerated their selling in the last several quarters, domestic buyers are not exactly selling, but they’re not adding to their holdings. So what’s left to absorb all of the spawn supply is the Federal Reserve.“
“I bought European equities a couple of weeks ago, literally for the first time in many years. I can’t remember the last time I did it. And that’s largely because I think the U.S. dollar is almost certain to decline over the intermediate to long term.”
On inflation expectations hitting eight-year high amdi reopening cheer – Rob Daly, director of fixed income for Glenmede Investment Management
“All of the better data points to a higher-inflation narrative that the market is reflecting,” said Daly. “But the Fed is not about to react to that yet.”
On Gulf bonds likely to set record in 2021 amid budget squeeze
Khalid Rashid, head of debt capital markets for the Middle East and North Africa at Deutsche Bank
“I think overall, the market will grow. We can easily add $7-10 billion more to 2020 total issuance,” he said.
Hasnain Malik, head of equity strategy at Tellimer
He said that he expects more consolidation among government-related enterprises, removing duplicated cost, and “raising of debt for the stronger business models that result from this consolidation is likely.” 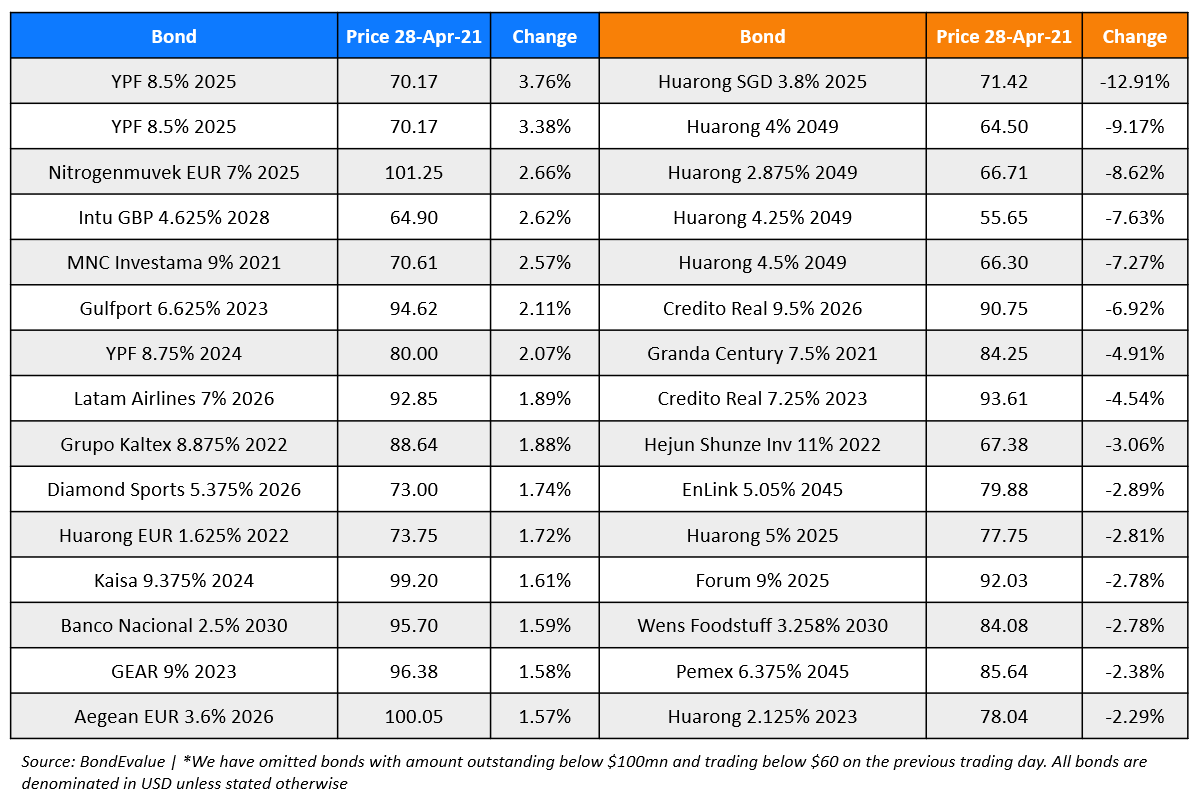