Belarus Downgraded to CCC by S&P 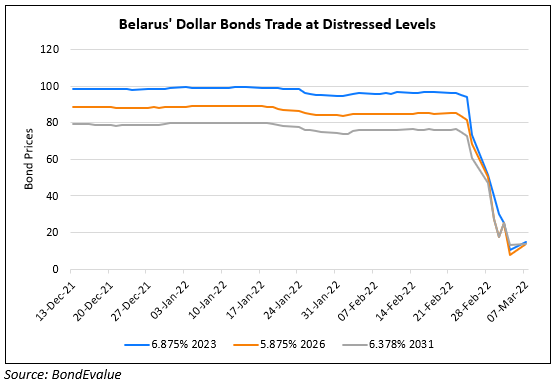 Belarus was cut to CCC from B by S&P due to mounting economic, balance-of-payments, and financial stability risks after strong international sanctions were imposed on Belarus by US, EU, UK and others. The sanctions were placed due to Belarus’ involvement in Russia’s military operations Ukraine by allowing Russia to use Belarusian territory as a “staging post” and firing ballistic missiles against Ukraine. S&P adds that Russia’s willingness to extend financial support to Belarus historically (providing subsidies, favorable hydrocarbon prices, refinancing debt maturities, credit lines etc.), was one of the key factors supporting the sovereign ratings on Belarus. Currently, given Russia itself is under severe pressure, their support would have negative impact on Belarusian debt. S&P expects Belarus to default on commercial debt over the next 12 months unless an unforeseen positive development occurs. Belarus’ dollar bonds have plummeted since the Russian invasion.