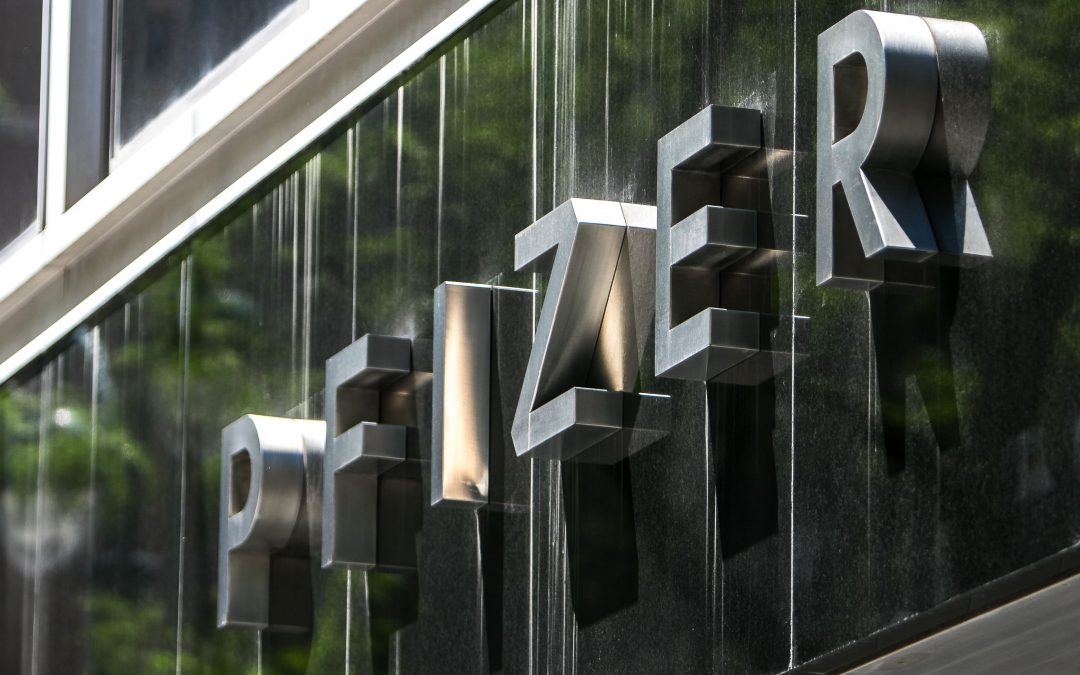 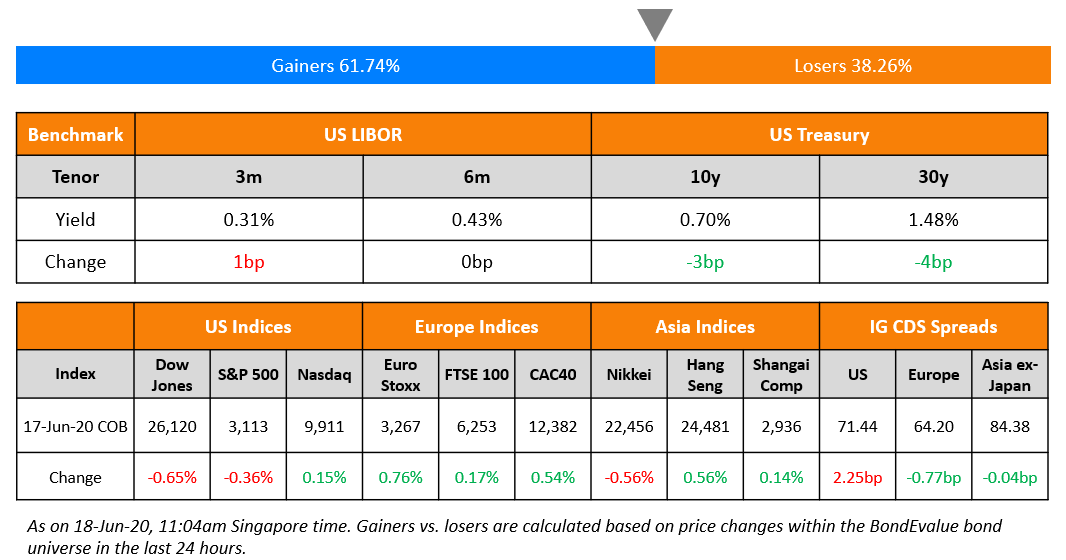 Rising cases of the coronavirus in the US and China have impacted sentiment in markets as concerns of a second wave grow day by day. European markets fared better than US markets and the primary bond market is seeing issuers everywhere raising funds. China Construction Bank did a $2bn deal in one of the busiest weeks for the Asian Dollar bond market since January. 14 US high grade borrowers sold nearly $24bn taking 2020 volume over 2019’s entire haul just halfway through the year. Europe’s primary market saw 18 issuers raise funds on Wednesday making June already surpass last year’s June numbers. Asian markets are opening lower this morning along with US index futures by around 1%. 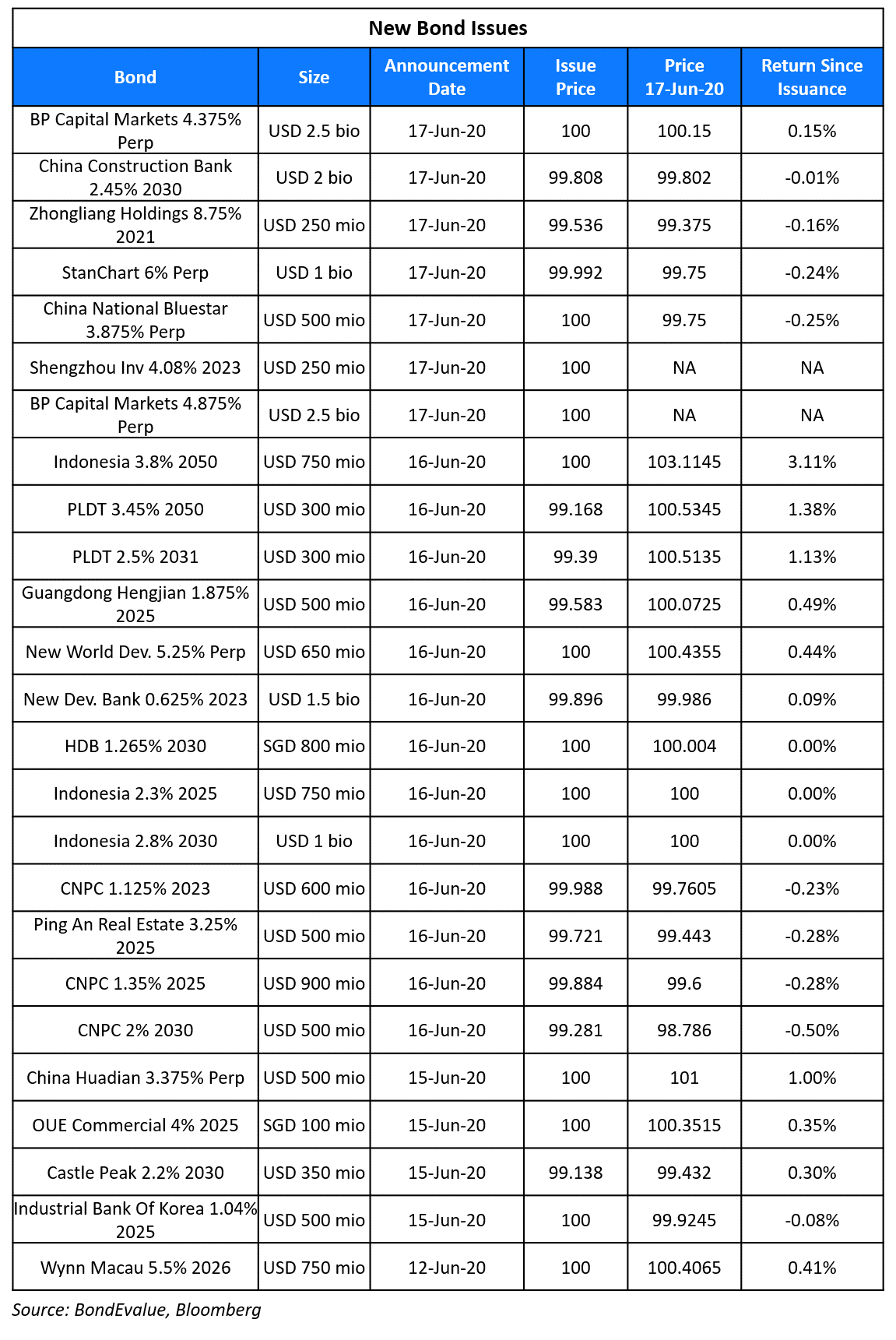 Standard Chartered raised $1bn via AT1 Perpetual non-call (NC) 5Y bonds at a yield of 6%, 50bp inside initial price guidance (Term of the day, explained below) of 6.5% area. The bonds, expected to be rated BB-/Ba1/BBB-, carry a coupon reset of 5Y Treasuries + 566.1bp if not called in July 2025. We have listed all the dollar denominated AT1s issued this year for comparison in the table below.

China Construction Bank (CCB) raised $2bn via 10Y NC5 Tier 2 bonds at a yield of 2.491%, 215bp over Treasuries and 35bp inside initial guidance of T+250bp area. The bonds, expected to be rated BBB+, received orders worth $5.1bn, 2.55x issue size. This is the first Tier 2 offshore bond from a Chinese bank this year, according to IFR.

The bonds, expected to be rated Baa3 by Moody’s, will be guaranteed by Pfizer till the combination deal between Upjohn and Mylan closes, which is expected in the second half of this year. According to the Moody’s rating release, the new bonds carry a mandatory repayment feature should the merger with Mylan not go through as expected. Post the merger, Pfizer will maintain 57% of the combined entity while Mylan will hold 43%, as per Bloomberg.

UK-based oil major BP raised $12bn via a jumbo mulit-tranche multi-currency bond deal on Wednesday. This is the largest issuance of corporate hybrid bonds ever, according to the Financial Times, and includes the following bonds:

The new hybrids, expected to be rated A3 by Moody’s, were priced just a day after it announced an expected write-off of up to $17.5bn on its oil and gas assets. The company cited sustained lower demand for oil on the back of the pandemic and an accelerated transition towards clean energy as the reason for the write-off in the second quarter. Investor demand seemed to be strong for BP’s debut hybrid offering given the orderbook of €15.85bn for the Euro hybrids, 3.3x issue size and £4bn for the Sterling hybrid, 3.2x issue size. Final orders for the dollar hybrids were not available.

Eldorado Resorts seeks to raise $6bn in bonds to finance its acquisition of Caesars Entertainment Corp even as Moody’s downgraded the company by another notch to B2, further into junk territory. The bonds, launched on Wednesday, were expected to see a deal on Friday. As per CNBC, the $17.3bn deal got postponed from April to June and both the companies have enough liquidity to sustain operations over the next one year. The breakdown of the total borrowing for the deal through various debt instruments includes the following.

Moody’s assigned a B1 rating to the $3.08bn senior secured notes and Caa1 to the $1.875bn senior unsecured loans. The company will have a high debt level following the Caesars acquisition and the Debt to EBITDA is expected at 7.5x in 2021 by Moody’s. While the risks associated with the execution of the deal exists due to revenue declines during the pandemic, the upside exists due to synergies in the two businesses as well as the size and diversification of operations of the combined entity.

In its 231st meeting, Brazil’s Monetary Policy Committee (COPOM) was unanimous in the decision of a Selic rate cut to 2.25% pa. While the GDP of the largest economy of Latin America is forecasted to shrink by over 6% amidst weak demand, Brazil’s central bank extended its record-breaking easing by cutting the benchmark Selic by 75bp to 2.25% on Wednesday. This record low was the eighth straight reduction. With this reduction, while inflation is expected to be below the year’s target, policy makers were uncertain about the remaining space for monetary policy stimulus as per Bloomberg. Economists see the GDP falling by 6.51% and the inflation by 1% below the 2.5% floor of target range as per a survey. With this monetary easing, there is little room for more rate cuts and the bank termed any further cuts only as “residual” adjustments. Brazil has seen historic drops from industrial output to retail while the uncertainty about the economy continues amid the pandemic and President Bolsonaro’s criticism of the quarantines imposed by state Governors. The salient points of the COPOM announcement are as follows.

Argentine Corporates Better at Managing Debt vs. The Sovereign

Given Argentina’s ongoing negotiations with its creditors amid the government’s ninth default, one might wrongly assume a similar story for Argentine corporates. Argentina-based corporates such as state-run YPF and Aeropuertos Argentina 2000 have come up with creative solutions that include swaps of overseas debt and issuance of local peso bonds to better manage their upcoming debt obligations. “Companies were very careful to tidy up ahead of a possible government default or the market closing,” said Federico Perez, who helps oversee 26 billion pesos ($374 million) at Mariva Asset Management in Buenos Aires. Dollar bonds of YPF and Pampa Energia have rallied ~20-25 points while Aeropuertos Argentina 2000’s bond has rallied ~10 points over the last month. Argentine corporate dollar bonds are trading ~30 points above Argentina’s sovereign dollar bonds. 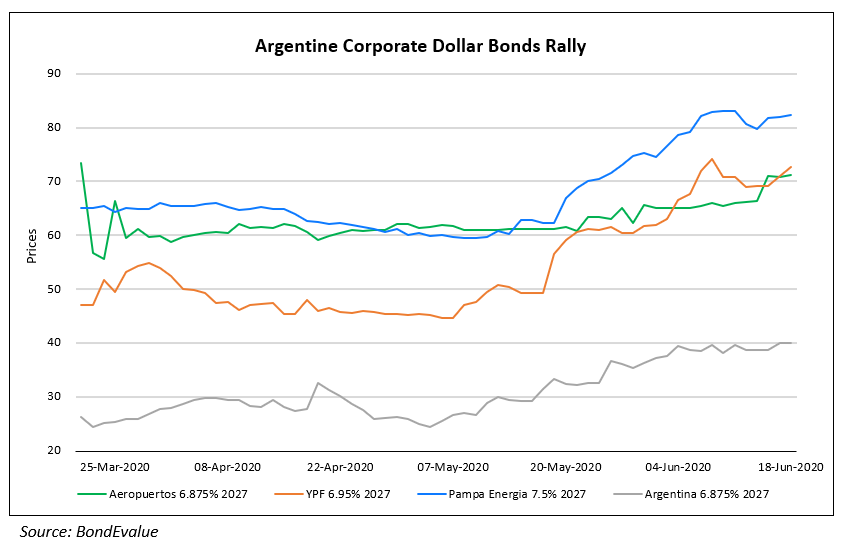 In related news, S&P Global Ratings has downgraded The Province of Buenos Aires’ bonds due 2027 to D from CC as it failed to make $68.9mn of interest payment on June 16 and does not expect it to pay within the 30-day grace period. The 2027s join a list of 6 other dollar and euro bonds already downgraded to D by S&P.

Initial price guidance (IPG) refers to the proposed yield on a new bond issue. Let’s take the example of the new StanChart Perpetual AT1 bond to understand this term better. The bond was announced yesterday at an IPG of 6.5% area, which tells investors that StanChart is planning to offer a yield of around (area) 6.5% on its new AT1 Perpetual bonds. Based on the IPG, investors will place orders with the lead managers of the new bond issue. Once the lead managers have received orders for the proposed bond, they will decide the final pricing on the bond, which almost always will be tighter (lesser) than the IPG. In the case of StanChart, the final pricing came in at 6%, which is 50bp inside (lower) than the IPG. The extent of tightening (lowering) of the final pricing on a new bond is a gauge of the demand for that bond – greater the tightening, greater the demand.

To understand more about the new bond issue process, you can read our blog New Bond Issue Process – Explained

The Wednesday meeting required full delivery of all fee-cutting steps introduced this year. The policy of reducing electricity prices, broadband rates and civil aviation development fund contributions and port development fees will be extended to the end of this year. Together with the fee cuts made in the first half of this year, these measures will save over 310bn yuan (US$43.7bn) for the whole year. “The fee cuts promised must be fully delivered…,” Li said.

Bain has closed a new distressed debt and special situations fund, with more than $3.2 billion in commitments, according to Jeff Robinson. “On the distressed side, in any 10-year period, there are maybe two great years to be a distressed investor, and we’re in the midst of those two great years,” he said. “I view 2020 as the great leveraging year.”

The People’s Bank of China (PBOC) pumped trillions of yuan into the financial system earlier this year, driving borrowing costs to multi-year lows. “The sale of the special government bonds is pressuring the already fragile market sentiment, which was hurt by a lack of PBOC easing since May. The central bank will bring forward its plan to cut reserve ratio to this or next month, with the aim of offsetting the liquidity blow.” said Becky.. 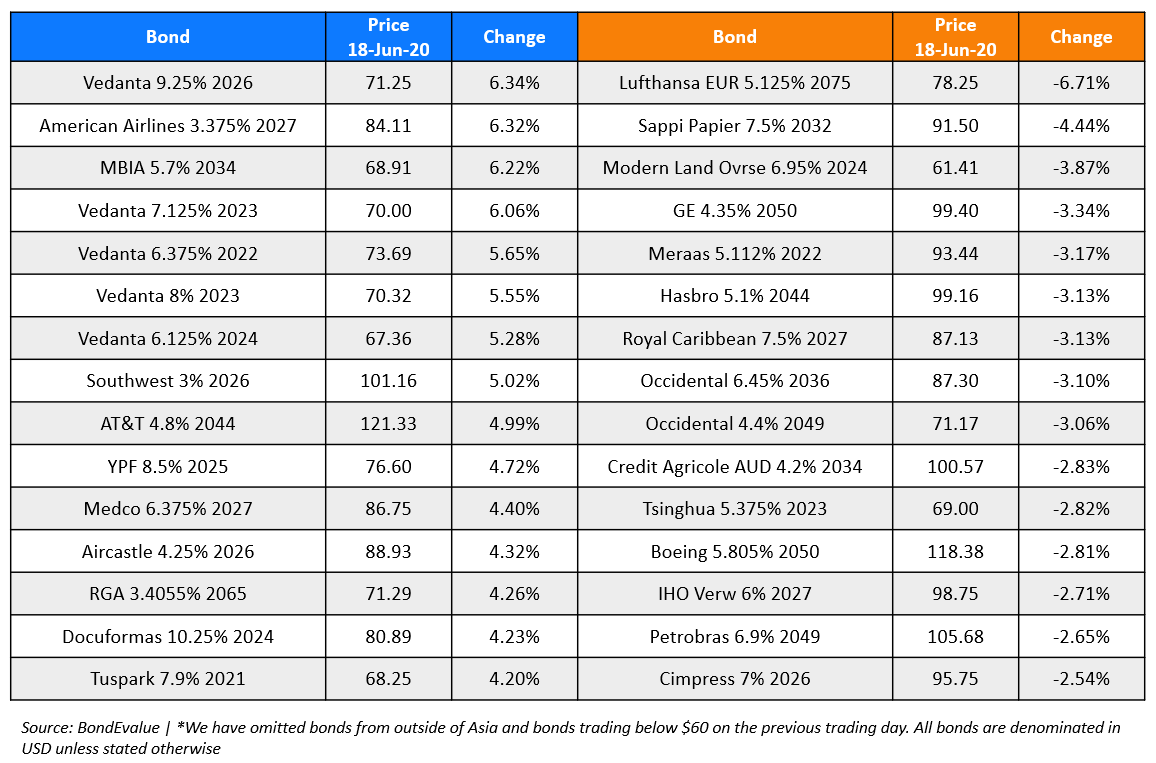