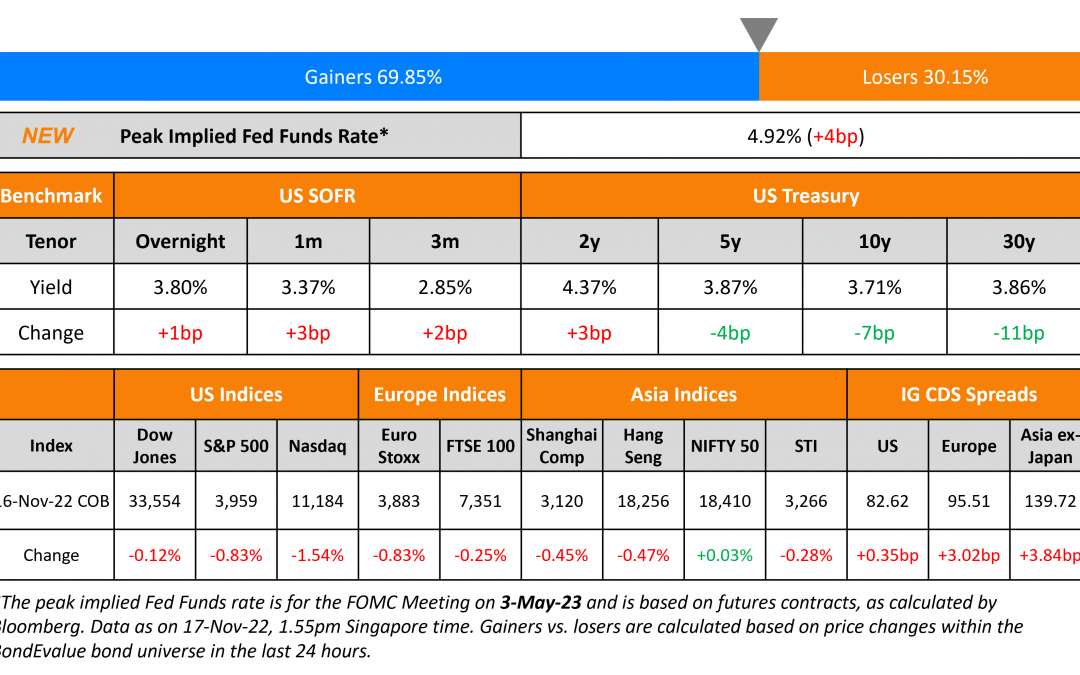 US 2Y Treasury yields moved 3bp higher while the 10Y and 30Y yields eased by 7bp and 11bp. With this move, the US 2s10s yield curve has thus inverted to -66bp, levels not seen in four decades. This has renewed concerns of a looming recession, given that a 2s10s inversion has preceded almost every recession in the last 50 years. The peak Fed Funds rate rose by 4bp to 4.92% for the May 2023 meeting. US Retail sales rose by more than expected to 8.3% YoY vs. forecasts of 6.9% and more than the 8.2% print in September. This was also the highest in eight months, indicating the underlying demand in the economy with analysts now looking at a probable “soft landing” by the Fed in 2023. Bond strategists from PIMCO and Barclays continue to make the case for buying bonds at this stage of the cycle. Probabilities of a 50bp hike at the FOMC’s December meeting continue to remain at 85%. US IG CDS spreads widened 0.4bp and HY spreads saw a 0.8bp widening. US equity markets moved lower  with the S&P and Nasdaq down 0.8% and 1.5% respectively. 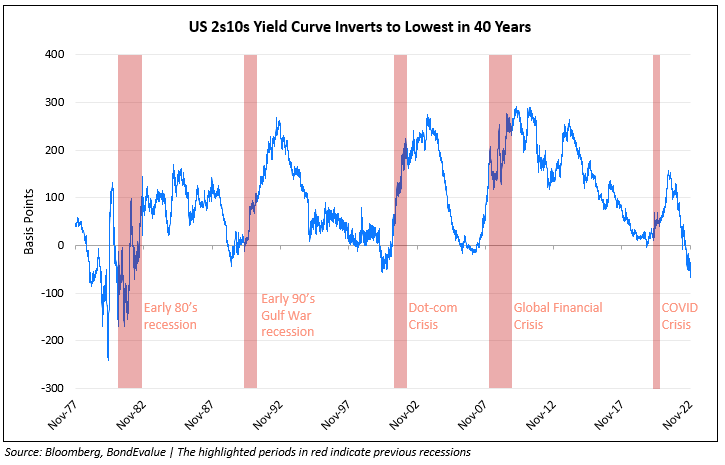 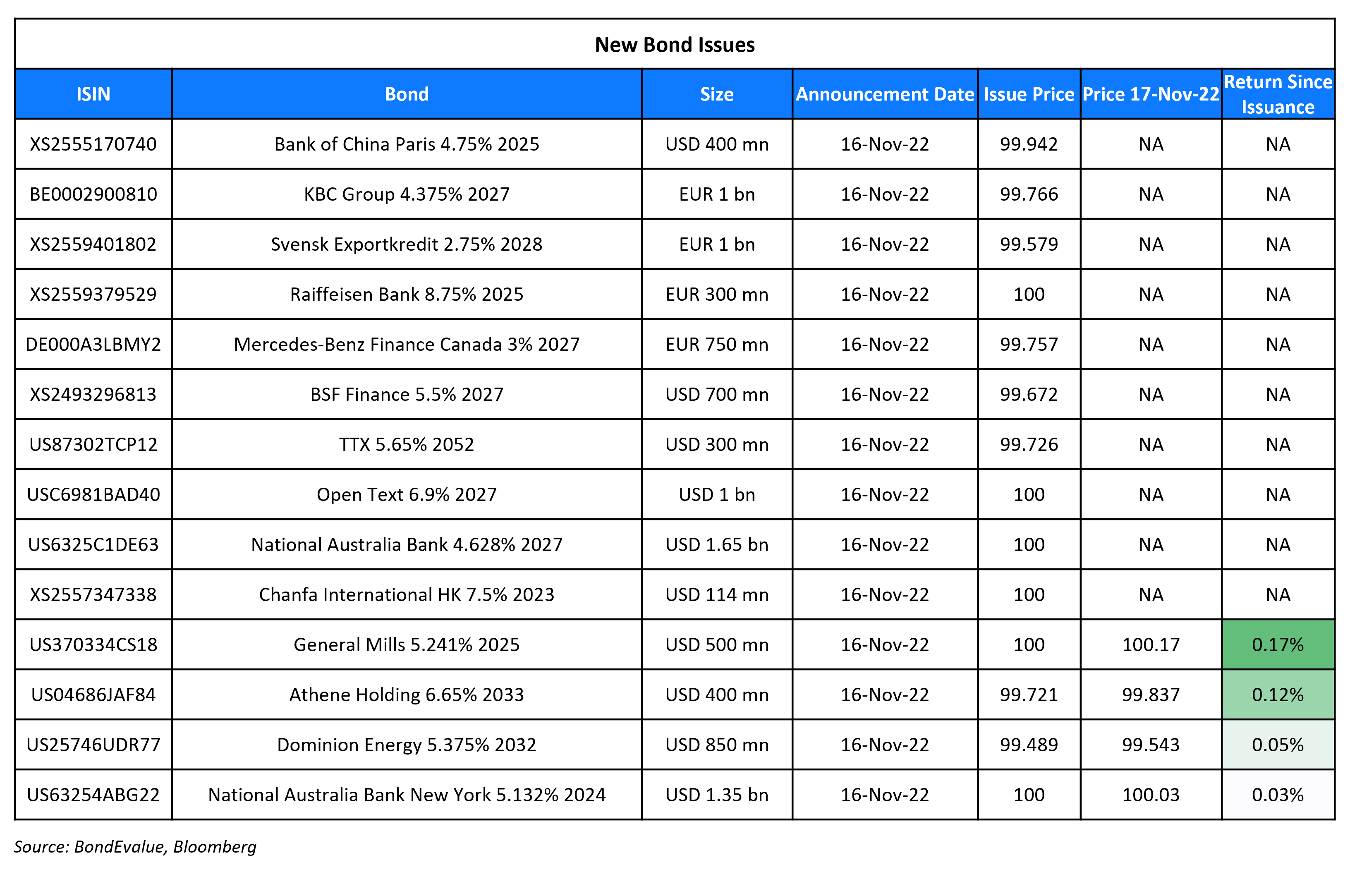 Bank of China (Paris) raised $400mn via a 3Y green bond at a yield of 4.771%, 39bp inside initial guidance of T+100bp area. The bonds are rated rated A1/A/A and received initial orders of $830mn, ~2x issue size. Banks/financial institutions took 77% of the order book, sovereigns/supranationals/agencies took 11%, insurers/corporations/private banks took 7% and asset/fund managers took the remaining 5%. By region, Asia took 93% and EMEA 7%. Proceeds will be used to finance and/or refinance biodiversity-related projects defined in BOC’s sustainability series bonds management statement, which includes the protection of mountain, plain, coastal, marine and watershed environments. The new 3Y green bonds offer a new issue premium of 37bp over its older 1.4% green bonds due April 2026, yielding 4.4% and a greenium (Term of the Day, explained below) of 13bp over its older 1.25% conventional bonds due June 2025, yielding 4.9%.

Jinan Industry Development raised $114mn via a 364-day bond at a yield of 7.5%, unchanged from initial guidance. The bonds are unrated. Chanfa International (HK) is the issuer and Jinan Industry is the guarantor. Bank of Qingdao Jinan branch is providing a standby letter of credit.

Investments in fixed income would tend to be resilient in a recession, when central banks typically cut policy rates… Treasury yields are already high enough to offer compelling return just from the income alone. In addition, a stabilization in rates could draw more investors back into the asset class. At the end of 2021, a US investor had to venture into emerging market US-dollar-denominated debt to find an asset class in line with the S&P earnings yield”… US bonds can “resume their role as a reliable diversifier against equities if a recession materializes.”

If forced to choose between stocks and bonds, we would be overweight core fixed income over equities,” the analysts said. But cash is a “low-risk alternative” that should win in 2023 as U.S. “front-end yields” are likely to go to at least 4.5% and “stay there for several quarters”

“The large repricing experienced since the beginning of the year – and particularly since the ‘mini’ Budget – has created the best buying opportunity in UK short-dated bonds since 2008… As bonds mature at par, this ‘pull-to-par’ effect should be a tremendous contributor to performance, particularly since around 40 per cent of our portfolio will mature over the next two years”

“Using monetary policy to mitigate financial stability vulnerabilities can lead to unfavorable outcomes for the economy. Monetary policy should not try to be a jack of all trades and a master of none… We have instituted changes over the past few years that support market functioning in times of stress… The time is now to find solutions that strengthen our financial system without compromising our monetary policy goals”

“We also expect slowing aggregate demand eventually leading to labor market weakness that builds on itself, and we anticipate that we could lose over a million jobs by the middle of ’24. This labor market weakness will convince the Fed that it has generated enough disinflationary impetus that it can start to ease policy toward a more neutral posture”

“At the moment, the market is still shut because no one wants to lock in these higher rates”

“We really need to see lower yields before the primary market can come back properly. Market worries about refinancing risks should decline as more primary deals get printed” 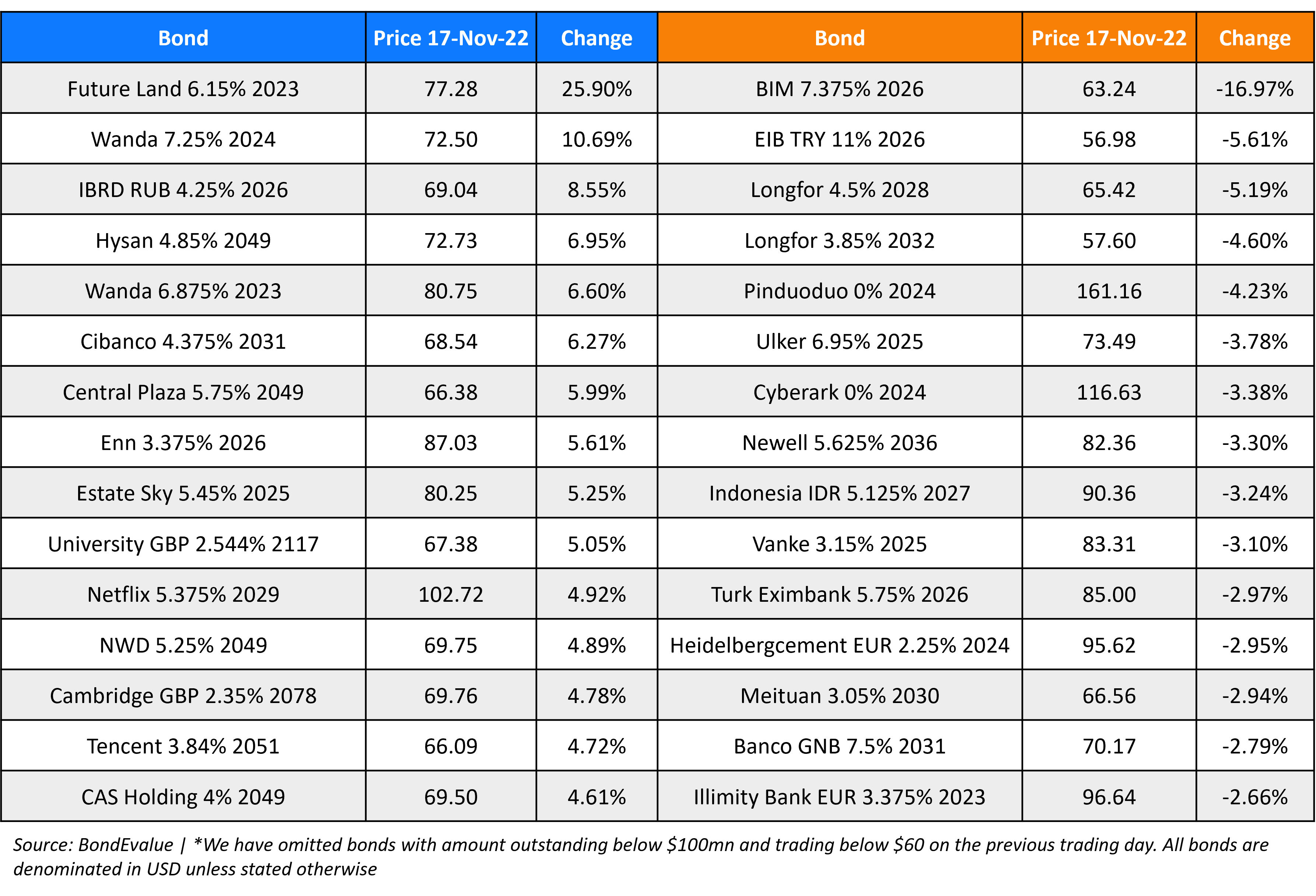