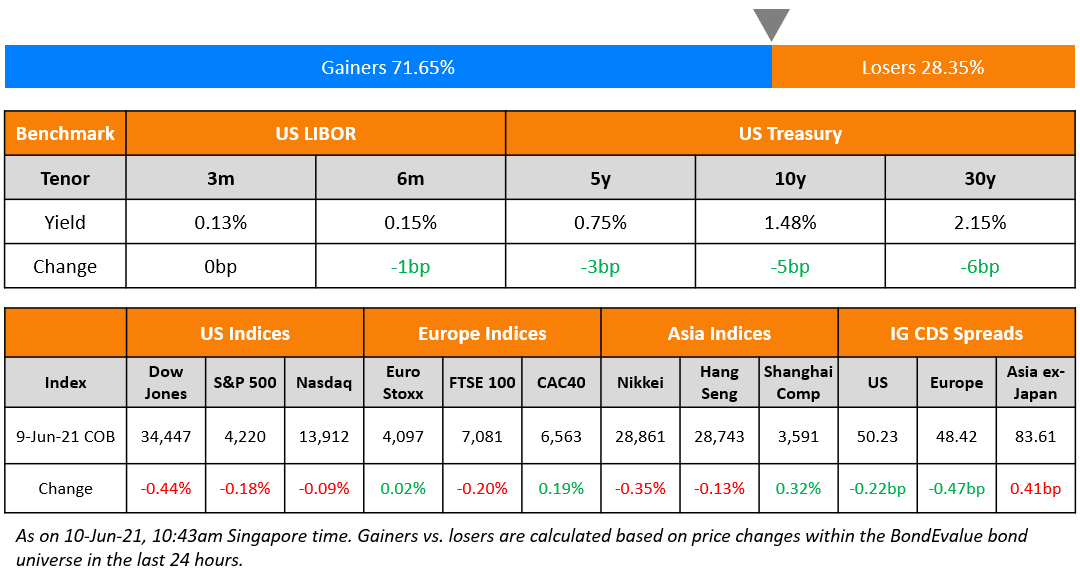 US markets slipped marginally ahead of the US consumer price index (CPI) for May, to be published later today. S&P was down 0.2% and Nasdaq was down 0.1% after wiping out some initial gains. Financials and Industrials led the losses with a drop of ~1% while Healthcare gained 1%. Economists are expecting the CPI to rise 4.7% from a year earlier, according to Dow Jones vs. April’s reading of 4.2%, the highest since 2008. US 10Y Treasury yields dropped by ~4bp to 1.49%, its lowest since October despite higher inflation expectations. European markets once again struggled for direction. DAX and FTSE closed 0.4% and 0.2% lower respectively while CAC closed 0.2% higher. US IG and HY CDS tightened ~0.2bp and ~0.4bp respectively. EU main and crossover CDS also tightened by ~0.5bp and 2.7bp respectively. Gulf markets closed higher tracking the oil prices. Saudi TASI was up 0.5% and UAE’s ADX was up 0.6%. Latam markets were mixed with Brazil’s Bovespa up 0.1%. Asian markets have opened higher ~0.5% and Asia ex-Japan CDS spreads widened 0.4bp. 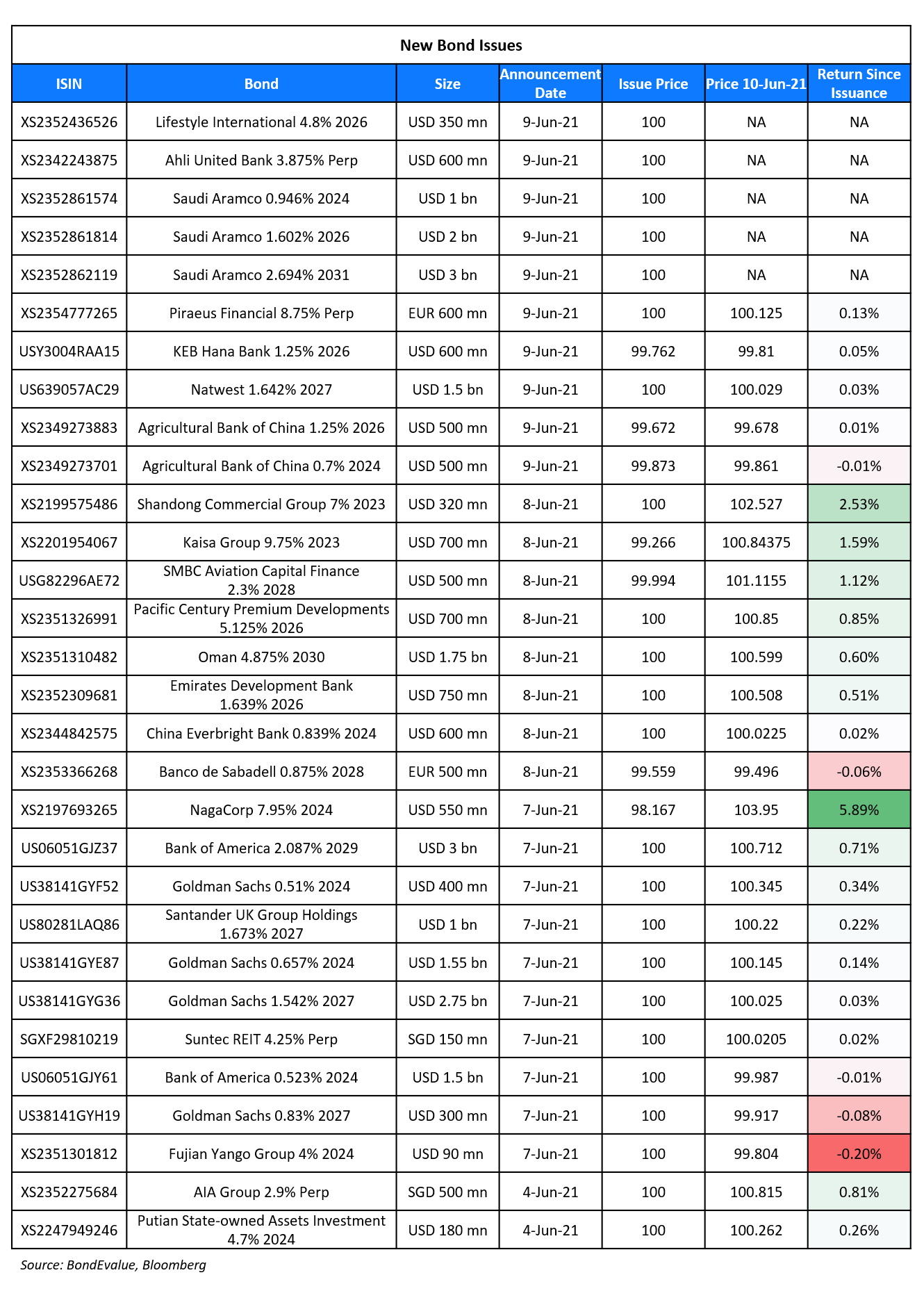 Fraser and Neave raised S$100mn via a 5Y bond at a yield of 2%. The bonds are unrated and received orders over S$225mn, 2.25x issue size. Fund managers, insurance companies and banks took 94% and the rest was taken by private banks. Funding arm F&N Treasury is the issuer with the parent providing a guarantee. The issuer retains redemption rights with a make-whole pledge on any interest payment based on the new prevailing benchmark rate of SORA-OIS + 0.5%. Proceeds will be used to fund working capital needs and capital expenditure, as well as to refinance debt.

KEB Hana Bank raised $600mn via a 5.5Y bond at a yield of 1.642%, or T+55bp. The bonds have expected ratings of A1/A+. Proceeds will be allocated to finance and/or refinance green and social projects in accordance with Hana’s sustainable financing framework.

NatWest raised $1.5bn via a 6Y non-call 5Y (6NC5) bond at a yield of 1.645%, 25bp inside initial guidance of T+115bp area. The SEC registered bonds have expected ratings of Baa2/BBB. Proceeds will be used for general corporate purposes.

Happy to share that we have raised US$6mn in our Series A round led by
MassMutual Ventures and Citigroup. Click on the image below to read the press release. To trade bonds in smaller denominations (starting at US$1,000) on BondbloX, sign up via the link below. 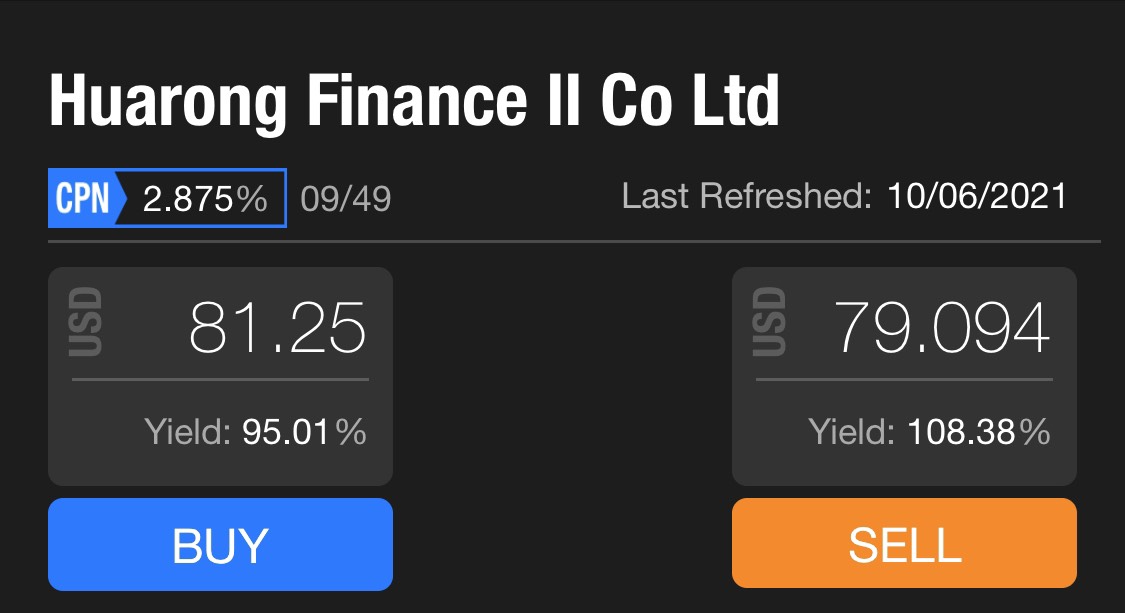 On bond yields hitting fresh 1-month low as taper bets recede
Naokazu Koshimizu, senior rates strategist at Nomura Securities
“As the recovery in the (U.S.) job market is contained, any discussion at the Fed on tapering is unlikely to gain momentum, even if it starts soon.”
James Athey, investment director at Aberdeen Standard Investments
“Nothing that we see in tomorrow’s report can prove or disprove any of the theories around the future path for inflation but I suspect that the market isn’t entirely believing of the Fed’s on-hold forever message.” “I therefore see potential for a higher print to push real yields and shorter dated yields higher thus flattening the curve and boosting the dollar. This might not be a great environment for risky assets.”
On cutting risks in light of tight credit spreads and potential for market volatility – Vivek Prabhu, head of fixed income at Perpetual Ltd
“Because credit spreads are so tight now, there’s a lot less spread dispersion so that means investors are being a lot less discerning about risk,” Prabhu said. “People are chasing yield at any cost or taking more risk in order to maintain their returns.” “We’re at this inflection point with interest rates and inflation and that could be the catalyst for market volatility going forward.”
On the possibility that green junk bonds may not deliver green results
Henry Shilling, founder of Sustainable Research & Analysis LLC
“This poses a dilemma for the green-bond investor.” “You need to account for the risk that you are holding something that, in the end, may turn out not to be green.”
Mitu Gulati, a law professor at the University of Virginia
“There are no mechanisms to ensure investors that the green investment will actually occur.” “The only conclusion I can draw from that is that investors don’t actually care. It’s so much eyewash.”
Jason Ewart, lawyer on debt deals at Latham & Watkins
“There’s really no teeth here.” “Investors have no recourse—there’s just egg on the face of the issuer in the green-investing community.”
Alastair Gillespie, an analyst at research firm Covenant Review
“The market is in its infancy, and its deficiencies are now becoming better known.” “If fund managers decide what’s happening isn’t good enough, there will be a natural desire for it to evolve.”

“If a meaningful reopening is not possible during the summer … then targeted economic support will be essential to ensure UK airlines are able to reach the point when a restart is possible, in order to protect many tens of thousands of jobs.” 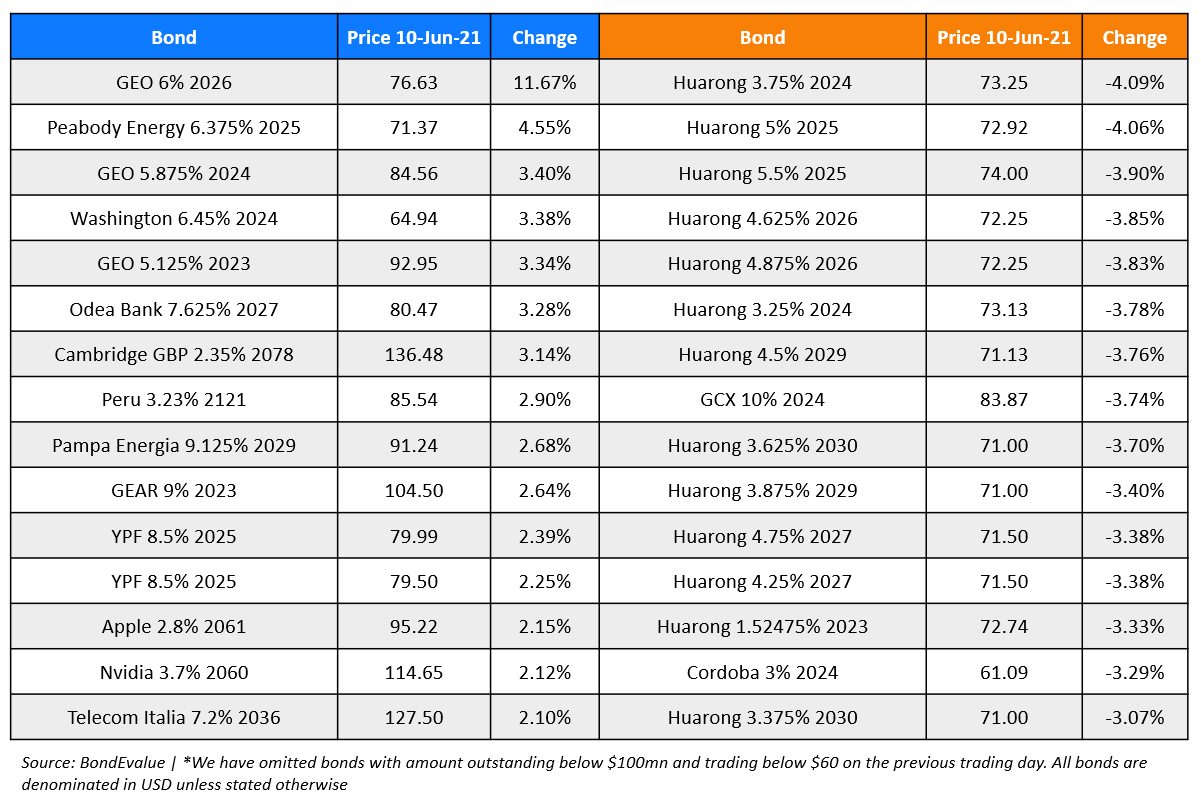