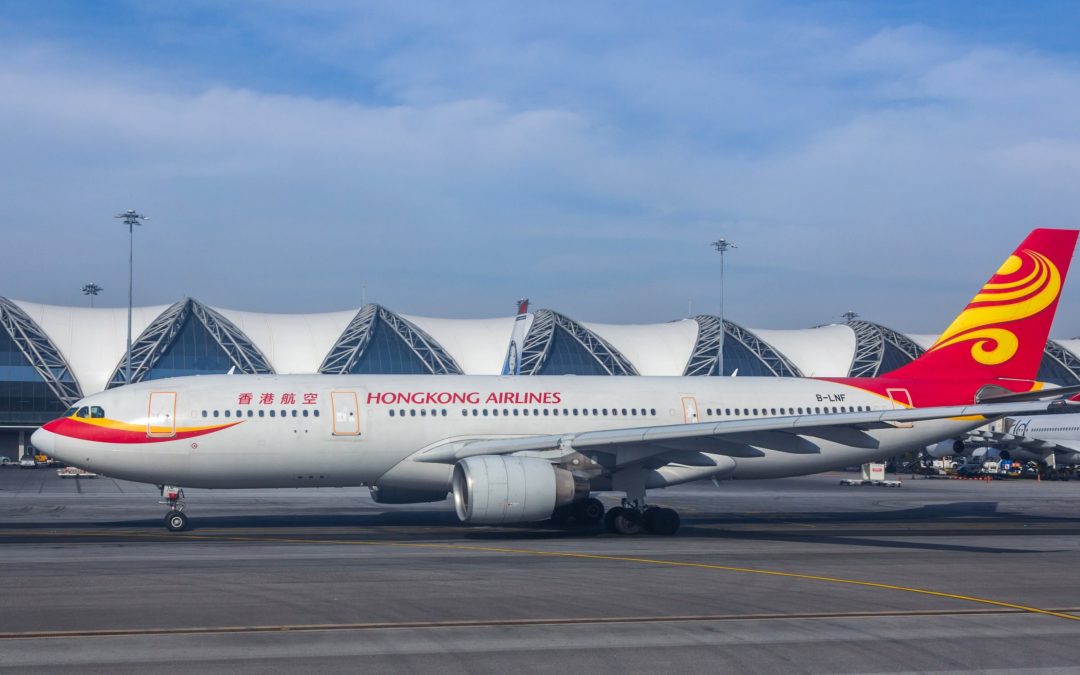 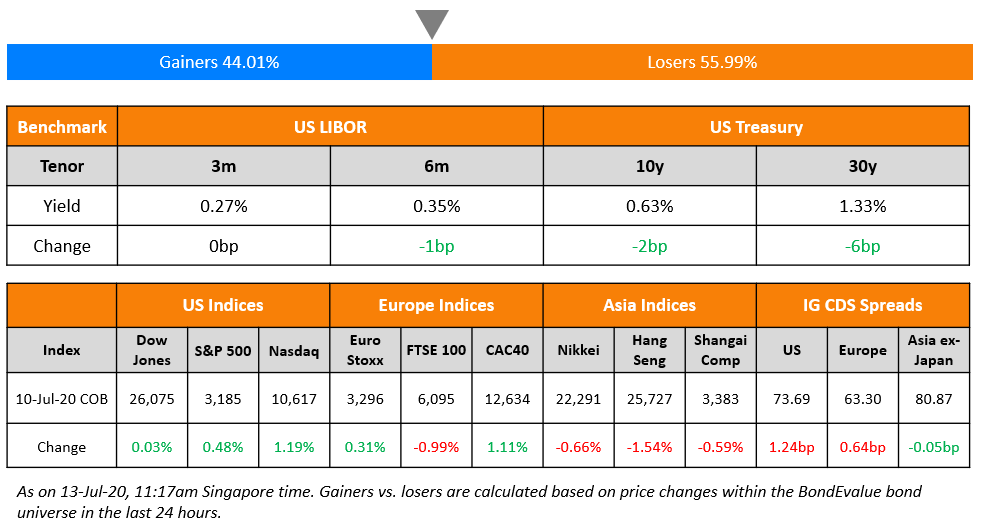 Wall Street gained on Friday after positive headlines from Remdesivir, Gilead Sciences’ antiviral drug, which came out claiming to reduce the risk of death and significantly improve conditions of severely ill patients. This comes despite surging cases in the US and an uptick in daily deaths. Financial stocks rallied but the Nasdaq underperformed the S&P and DJI as investors move money out of the booming tech sector. European shares also fared well and Treasuries gave up some of their gains from Thursday. The European Council is set to meet starting this Friday in Brussels to discuss details about the EU’s COVID-19 recovery package. The deal is not guaranteed as there is still disagreement between the member states and the frugal quartet over whether the €750bn package would be in the form of grants or loans. Asian dollar bond spreads tightened for an 11th straight week to Friday and investors were kept busy with new deals. Asian markets and US index futures are opening higher this morning following the Friday rally and Asian primary markets are seeing a flurry of new deals. 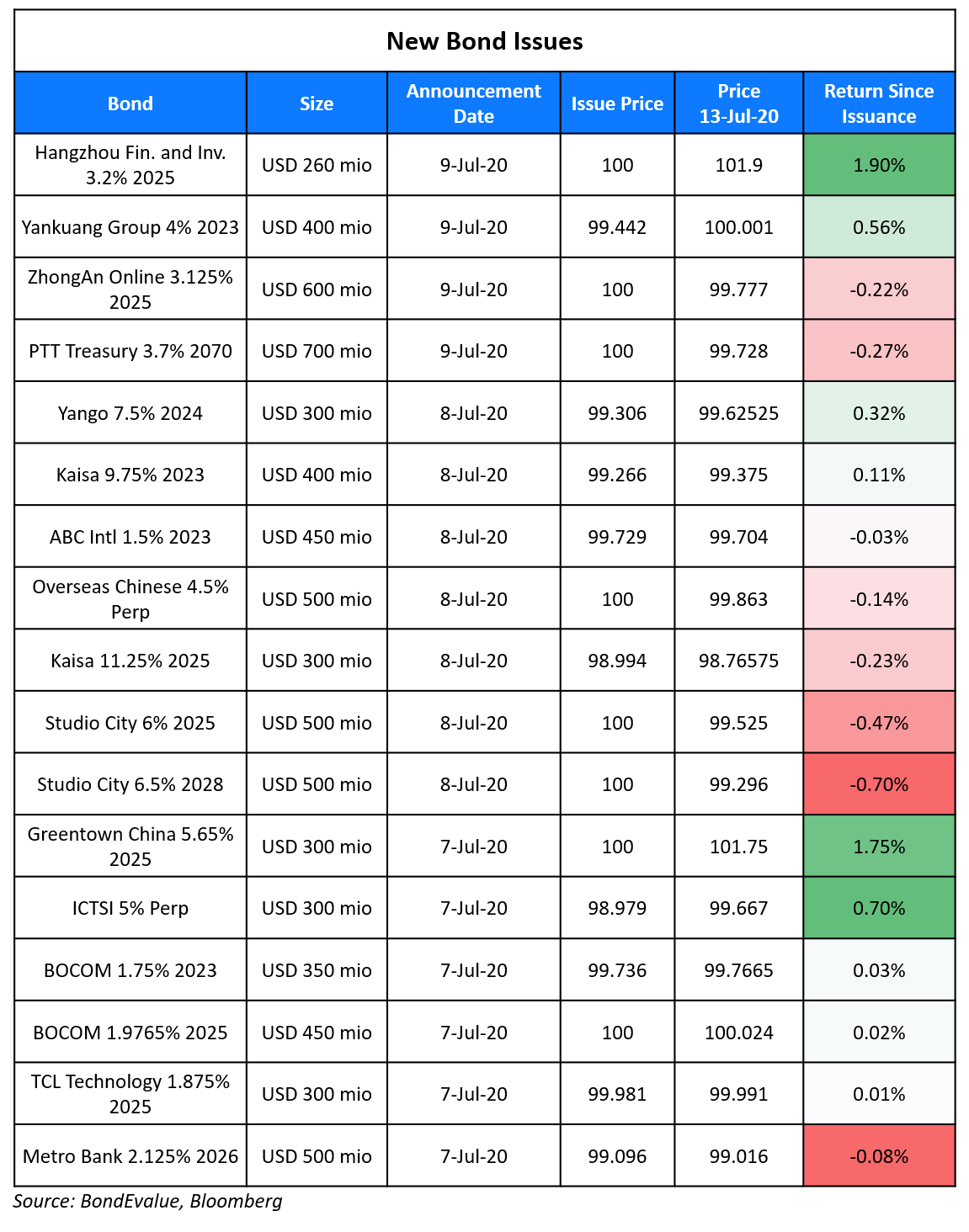 State-owned Thai oil and gas company PTT, raised $700m via 50Y bonds at a yield of 3.7%, 45bp inside initial guidance of 4.15% area. The bonds, expected to be rated BBB+/Baa1 in line with the issuer, received final orders exceeding $1.9bn, 2.71x issue size. This is Asia’s first dollar corporate bond offering at that tenor. Indonesia had raised $1bn via a 50Y bond in April while PTTEP, PTT’s 65% owned subsidiary issued a 40Y bond in November 2019. Wholly owned subsidiary PTT Treasury Center is the issuer and PTT is the guarantor. This is the first dollar bond issuance from PTT since 2012, making it a rare credit.

Hangzhou Finance and Investment Group raised $260mn via 5Y bonds at a yield of 3.2%, 50bp inside initial guidance of 3.7% area.The bonds, expected to be rated BBB+, received final orders of over $1.6bn, 6.15x issue size. The bond will be issued by wholly owned subsidiary HFI International (HK) and guaranteed by the state-owned parent company.

Chinese coal producer Yankuang Group raised $400mn via 3Y bonds at a yield of 4.2%, 55bp inside initial price guidance of 4.75% area. The bonds have an expected rating of Ba1. Wholly-owned subsidiary Yankuang Group (Cayman) is the issuer with a guarantee from the parent company.

United Airlines Holdings Inc. Downgraded To ‘B+’ On Steep Demand Decline Due To COVID-19; Outlook Negative

The third largest airline of Hong Kong, Hong Kong Airlines will defer interest payment worth $24.33mn due on July 26 on its $683mn 7.125% perpetual bonds. The deferral will lead to a 5% step-up in the bonds coupon to 12.125%. The airlines has seen a loss of revenue on account of reduced traffic due to travel restrictions on the back of the pandemic and months of anti-Beijing protests, which has made it harder for the company to service its debt. The company is backed by HNA Group, which itself is under stress and has resorted to cost cutting measures including job cuts and sending staff on unpaid leave since February this year. The company is said to be looking for a White Knight (Term of the day, explained below) to prevent a hostile takeover due to its poor financing. However, the uncertainty amid the pandemic has made it difficult due to pricing concerns. The airline has received more than CNY 1bn ($143mn) since January from HNA groups as a larger plan of debt restructuring by the group. The poor finances of the aviation company were noted by the city’s Air Transport Licencing Authority, which had threatened the company of invalidating its licence in case it failed to raise more cash. Although there has been a slight increase in demand for air travel in China after lockdown relaxations in the country, the aviation sector faces a grim forecast with travelers resorting only to essential travel with leisure travel taking a huge hit. Airlines globally are likely to see a loss of $84 bn according to the International Air Transport Association. 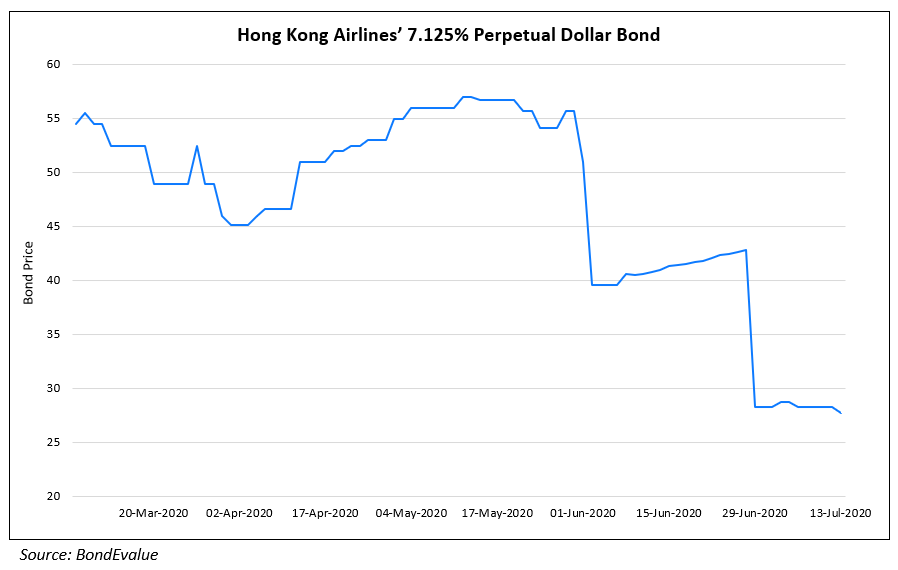 Brooks Brothers had filed for Chapter 11 bankruptcy protection on July 08. The company has 1,400 stores across 45 countries and has been forced to close 51 stores while shutting many of its manufacturing facilities. The company has also taken other cost cutting measures including sending 4,025 workers on furlough. In an interesting turn of events, Brook Brothers is likely to manage to secure a $80mn loan at 0% interest rate and without any closing fee. There will be no early repayment penalty, which possibly gives the company more flexibility to close any sale arrangements. This is noteworthy since the company is in the process of restructuring its finances while in bankruptcy. The loan is offered by a partnership between Authentic Brands Group LLC and mall landlord Simon Property Group Inc. at a bargain possibly due to the ongoing competition with WHP Global, which is a brand-buying company. “I’m convinced the terms will be the best that can be achieved,” said the company’s lawyer Garrett Fail, during a court hearing Friday. The company is said to be in discussion with multiple bidders and will be organizing an auction to attract competition under the supervision of the court overseeing the bankruptcy proceedings. Brooks Brothers had earlier secured a $75mn loan from WHP Global before filing for bankruptcy.

Investors holding S$159.5mn of Frasers Commercial Trust’s (FCOT) bonds exercised their put options to redeem the bonds at par, as per an exchange filing. The put option on FCOT’s bonds was triggered by the delisting of the company from the Singapore exchange in late April after it merged with Frasers Logistics & Industrial Trust to form Frasers Logistics & Commercial Trust. Details of bondholders exercising the put option are as follows:

None of the holders of the S$50mn 2.783% bonds due 2021 exercised the put option. Principal and accrued interest on the bonds were paid out on July 9. 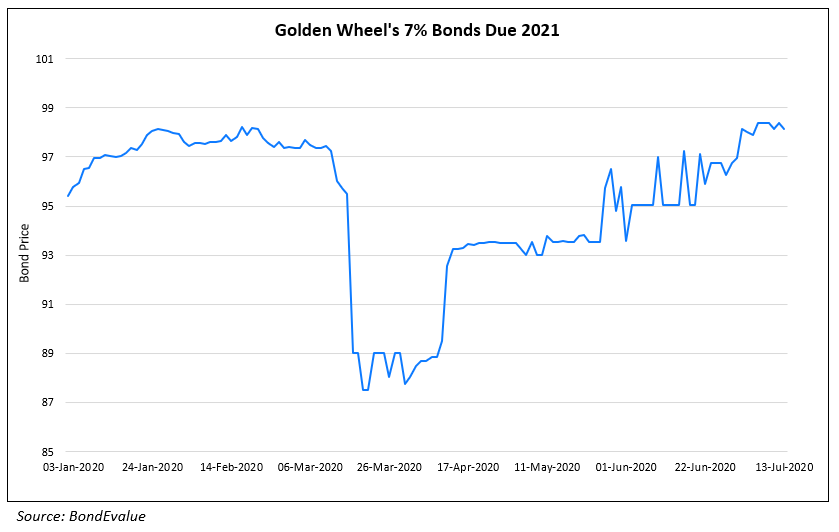 Softbank bought back $2.7bn worth of its stock in June, which helped push its stock to the highest level in two decades. The company bought 54.86mn shares for JPY 290bn ($2.7bn). The share buyback comes after it posted a record JPY 1.36tn ($12.6bn) operating loss for the year ended March 31. SoftBank has already lined up a third repurchase package and pledged to spend an additional JPY 1tn ($9.4bn) on buying back stock this fiscal year. Softbank’s dollar bonds have been largely unchanged on the secondary markets.

In related news, WeWork’s Executive Chairman Marcelo Claure said that the company is on course to have positive cash flows in 2021, a year prior to the target set by the company in February. “Everybody thought WeWork was mission impossible,” Claure, who is also a SoftBank executive, was quoted as saying by the FT. “And now, a year from now, you are going to see WeWork to basically be a profitable venture with an incredible diversity of assets.” WeWork’s 7.875% bonds due 2025 are currently trading at 49.25 cents on the dollar.

SB Energy, a solar energy joint venture between Softbank (80%) and Bharti Overseas (20%) launched a dollar secured green 5Y bond at an initial price guidance of 6.75% area. The bonds will be issued by SB Energy Investments, a subsidiary of UK-based SB Energy Holdings and will be guaranteed by special purpose vehicles that own five solar plants in India. As reported by us last week, the bonds are expected to be rated BB- by Fitch.

Institutional investors bought €1bn ($1.1bn) of private bonds backed by front companies that were linked to, and later charged with, working with Southern Italy’s ‘Ndrangheta mafia, according to the Financial Times. One of Europe’s largest private bank, Banca Generali, was one of the investors of the bonds in a transaction where consulting services were provided by EY. As explained by Bloomberg’s Matt Levine, the ‘Ndrangheta ran some corrupt businesses providing health-care-related services (ambulances, funeral services, food in refugee camps) to government health authorities in Calabria. They would bill the government for those services. This involved a mix of extortion, “widespread fraud and double billing of invoices.” Instead of simply collecting the money from the government, the ‘Ndrangheta securitized the invoices. Under EU law, overdue invoices owed by state-connected entities incur a guaranteed penalty interest rate. This makes them attractive for special purpose vehicles, which place them into a large pool of assets and issue bonds backed by the expected cash flows from the future settlement of the invoices.

Anna Sergi, a Calabrian-born criminologist at the University of Essex described the people running the ‘Ndrangheta now saying, “A number of the younger generation, those who I grew up at the same time as, have degrees from the London School of Economics or even Harvard. Some have MBAs. They live outside Calabria and appear like respectable businessmen, not directly involved in street-level illegality but there to offer technical expertise when it is needed.”

White Knight is a strategy adopted by a target company likely to be taken over by another company to avoid a hostile takeover. It is considered a defense by facilitating a takeover by a friendly company. The hostile or unfriendly bidder is referred to as the Black Knight and the friendly company is referred to as the White Knight.The advantage of such a takeover is that even though the target company loses its independence, its core business is preserved and existing management continues to function. In 1953, United Paramount Theaters acquired the nearly bankrupt ABC and in 2008 JP Morgan Chase acquired Bear Stearns as part of a White Knight strategy. In case a friendly company buys only a stake in a beleaguered company to avoid a hostile takeover then it is referred as a White Squire.

“It is the high-yielding play in the region for sure,” said Mark Dowding. “We see spreads continuing to rally as political risks subside against the backdrop of increased eurozone solidarity in the face of the Covid crisis.

Italy “is one of the few developed market sovereigns with yields still positive and close or above inflation”, said Alberto Gallo, adding investors are not necessarily betting on a quiet summer. “They are still having a sigh of relief after the sell-off but have not deployed much of their capital.”

“It is more nuanced in a currency zone with multiple fiscal issuers,” said Chris Iggo. “The ECB has to simultaneously manage the yield curve and the sovereign credit spread, but the idea is to keep government bond yields at extremely low levels and stable.”

Isabel Schnabel, the ECB board member responsible for the bond-buying program

“The yields on government debt differ among euro-area countries because economic fundamentals are different in each country; we don’t want to change that,” Isabel said last week. “But if suddenly, somewhere in the euro area, funding conditions worsen dramatically, then we have to counter this.”

On Prospects of the Bond Market – Lisa Chua, portfolio manager at Man GLG

“Post the market selloff in March, the supply could be easily absorbed by demand as investors added risk back at cheaper valuations, but we think we may now be close to a tipping point. We believe valuations now reflect much of the positive news,” with euphoria around central banks such as the Fed providing a back-stop well priced in, said Chua.

“Risk accumulation appears now back to the highs. The risk from such a large amount of debt being sold globally is that the positioning of the buyers of that debt becomes so crowded that there may be no marginal buyer left.” 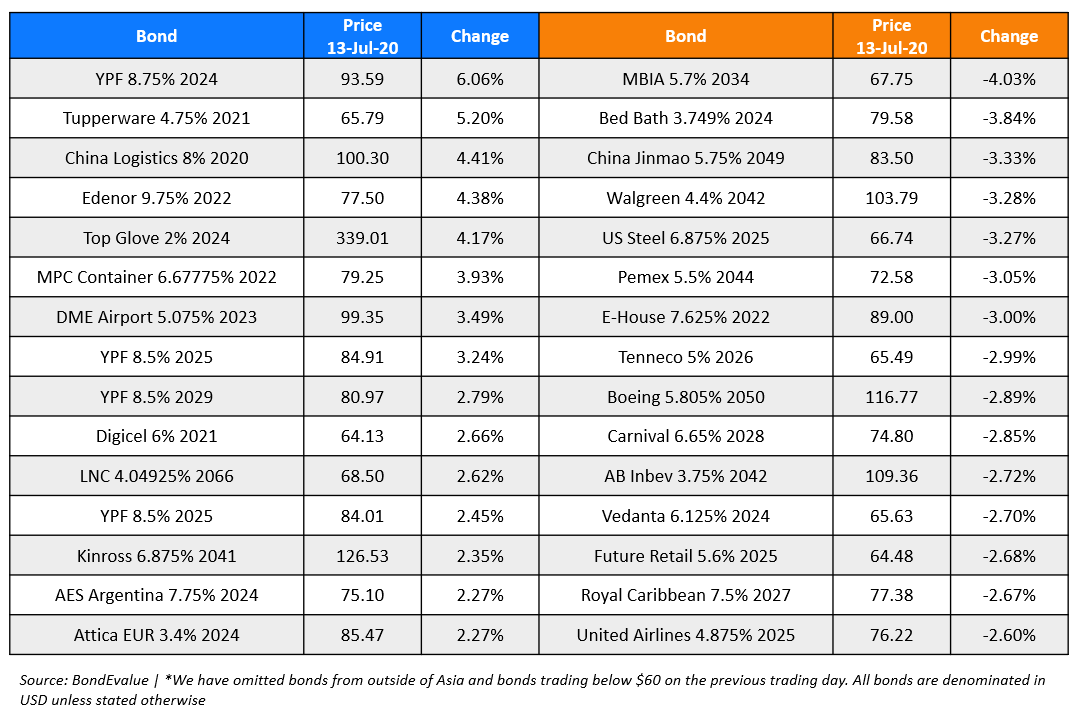