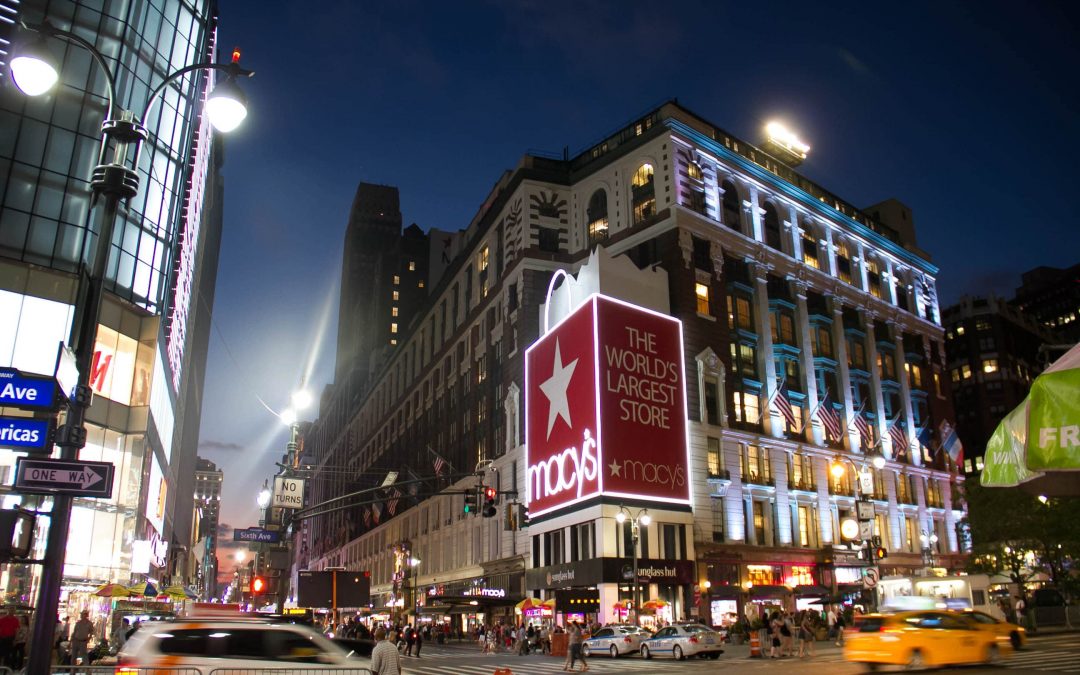 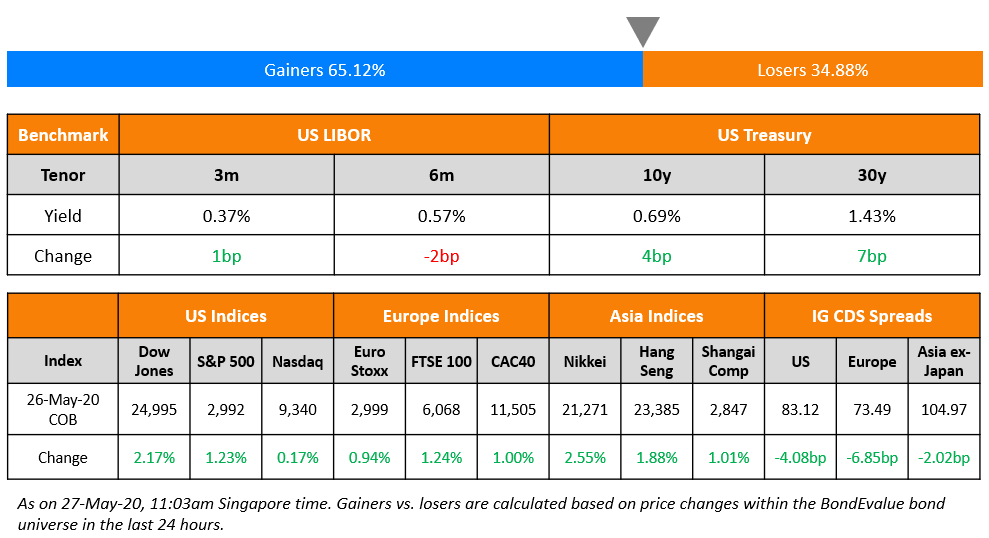 Asian markets are set for a mixed start. Overnight markets sputtered towards the end of trading after a strong session. Economic recovery and coronavirus vaccine hopes by Novavax and Merck & Co supported investor sentiment along with better than expected US data releases. Some of the gains were given up when economic advisor Larry Kudlow said US President Donald Trump was considering new sanctions against China for introducing stricter security measures in Hong Kong. Focus now shifts to rising tensions between US and China as Israel has rejected a bid by a Hong Kong-based conglomerate to build the country’s largest desalination plant, buckling to US pressure to curtail Chinese investments in sensitive areas of the economy. Europe’s main and crossover CDS spreads tightened 6.9bp and 32.5bp from last Friday. The US investment grade CDS spread narrowed 4bp. Asia ex-Japan IG CDS spreads continue to tighten as we see dollar bond deal activity picking up.

Chinese insurance company Ping An Insurance raised $600mn via 5Y bonds at a yield of 2.765%, 240bp over Treasuries and 45bp inside initial guidance of T+285bp area. The bonds, to be issued by Vigorous Champions International and guaranteed by China Ping An Overseas, are expected to have a rating of Baa2 by Moody’s. The bonds carry a change of control put, which can be exercised at a price of 101 if the parent ceases to own 100% of the China Ping An Overseas or if China Ping An Overseas ceases to own 100% of Vigorous Champions International. The new deal was met with strong demand with orders exceeding $3.6bn, 6x issue size. The company last issued a 5Y bond last year at a yield at issuance of 3.67%, 147.5bp over Treasuries.

Moody’s downgrades Guangzhou R&F to B1 and R&F HK to B2; outlook negative

Fitch has downgraded the Long Term IDRs for Macy’s Inc and Macy’s Retail Holding Inc to BB to BB+ with a rating outlook of negative. The downgrade and the outlook is based on the interruptions in the business model of Macy’s due to the ongoing pandemic. Fitch expects the leverage to increase to over 15x in 2020 from 2.9x in 2019. Macy’s had ended 2019 with $685mn of cash on its books and has sufficient liquidity to tide over the current shock. The company is restructuring its unsecured revolver of $1.5bn and is in the process of securing a $3bn form ABL which is largely owned by Macy’s itself. The company also has combined debt of $980mn maturing in 2021 and 2022 which would be paid with the cash on hand or revolver borrowings as per Fitch. The Macy’s bonds remained largely stable. The 4.3% bonds maturing in 2043 traded at 53.087 cents on the dollar, down 0.5 points while the 9.5% bonds maturing in 2021 traded at 97.781 cents on the dollar, up 1.21 points.

Fitch Ratings predicts deterioration of the fiscal prospects of most sovereign nations in the Middle East and Africa region (MEA) on the back of declining oil prices and the reduced economic activities due to the pandemic. A total of 10 sovereign nations from MEA have been downgraded since the start of 2020 and 8 out of the 33 nations have been placed under a negative outlook, suggesting possible downgrades in the future. 5 out of the 33 nations are rated CCC or below. According to Fitch, the economic growth for most counties in MEA will return only in 2021. The median general government (GG) debt as a share of GDP increased from 36% in 2013 to 60% in 2019.

Pacific International Warns of Potential Default on Its Bonds; In Talks With Temasek Unit for Investment

Singapore-based shipping company, Pacific International Lines (PIL) has warned of a likelihood of default on its S$60mn 8.5% bonds due Nov 16 this year. PIL has received approval from its creditors to defer interest and principal payments on its debt and to a standstill on enforcement actions until Dec 31 this year. According to the terms of its S$60mn bonds, the payment deferral would lead to an event of default. The issuer said it would hold informal meetings with bondholders to update them on the company’s financial status and/or to discuss restructuring.

A consortium led by Heliconia Capital Management, which is owned by Temasek Holdings, is in talks with the troubled company for a potential investment. According to a Business TImes story, DBS Bank has the largest exposure of $260mn, followed by Bangkok Bank at $220mn, Maybank and OCBC. Two entities linked to Temasek are also on the creditor list. SeaTown Lionfish, an independent subsidiary of Temasek, together with Broad Peak, a hedge fund in which Temasek is said to be an investor, are owed about $140 million, secured on vessels and PIL’s shares in Singamas, as per the Business Times story.

PIL’s 8.5% bonds due November are currently trading at 86.6 cents on the dollar, up from 81.5 cents since the start of April.

Indonesian state-owned lender Bank Rakyat Indonesia (BRI) foresees a sharp deterioration in its earnings as the pandemic has put business activity on a freeze. Micro, small and medium enterprises account for over 50% of the bank’s loan book, the highest among the country’s top four banks, making it more vulnerable to the impact of the pandemic on smaller businesses. The bank’s Finance Director Haru Koesmahargyo says this is the worst crisis faced by the country’s smaller companies in over two decades, and expects the banks loan losses to surge and profits to fall. BRI is deferring principal and interest payments on its loans and has already restructured loans worth IDR101tn ($6.8bn) extended to 1.4mn borrowers. The bank has slashes its loan growth forecast to 5% for this year, from 10-11% set in January. BRI’s dollar bonds have trended higher over the last few months with its 4.625% bonds due 2023 and its 3.95% bonds due 2024 up ~4 points since the start of April to trade at 103.03 and 100.75 currently.

We continue to see more governments bailing out their crucial industries and national champions. The French government has announced an €8bn rescue plan for its car industry, which has been severely impacted by the coronavirus pandemic. President Emmanuel Macron’s proposal includes €1bn to provide grants of up to €7,000 to encourage citizens to purchase electric vehicles. It also puts money toward investments to make France a centre for electric vehicle output. In return for the relief, the two main French car producers Renault and PSA have promised to focus production in France. According to IHS Markit, France was Europe’s top producer of electric and hybrid cars in 2019, with almost 240,000 vehicles, but Germany is set to overtake it by the end of this year. Some other names that have been supported directly or indirectly by their respective governments include Pemex, Qantas, SIA, Lufthansa, Boeing, with mostly airlines on the list.

Credit rating agency Fitch Ratings downgraded Argentina to Restricted Default (RD), following S&P Global’s downgrade of four of Argentina’s dollar bonds to default last week. We wrote about Argentina’s ongoing negotiations with its bondholders yesterday, which comes after the country failed to pay a $500mn payment last week. The Credit Derivatives Determinations Committee said in a statement that it has been asked to rule on whether the missed payment counts as “failure to pay” credit event, given that two of the three major credit rating agencies have downgraded it to RD. According to latest data compiled by ISDA, there are net $1.5bn worth of bets on Argentina’s credit default swaps (CDS). CDS are financial instruments that payout to holders when a bond issuer defaults, thereby reducing the risk to the bondholders. However, CDS are also used to speculate against an issuer remaining solvent. 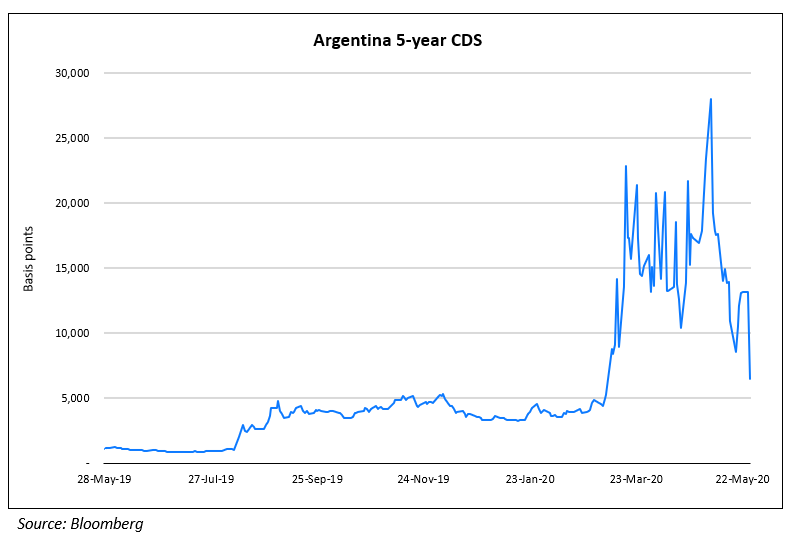 BEV Term of the Day:

ZIRP or zero interest rate policy is a monetary policy of stimulating growth by keeping interest rates very close to zero. This policy encourages investors to pursue low cost borrowing rather than savings. The linear extension of ZIRP might lead to NIRP (Negative Interest Rate Policy), as seen in the Eurozone, where borrowers are paid to borrow. Such a policy is used to combat deflation and to promote economic recovery. ZIRP may lead to unconventional monetary policy such as quantitative easing being implemented in order to increase the monetary base. ZIRP has been adopted by Japan, the Eurozone and more recently, the US. 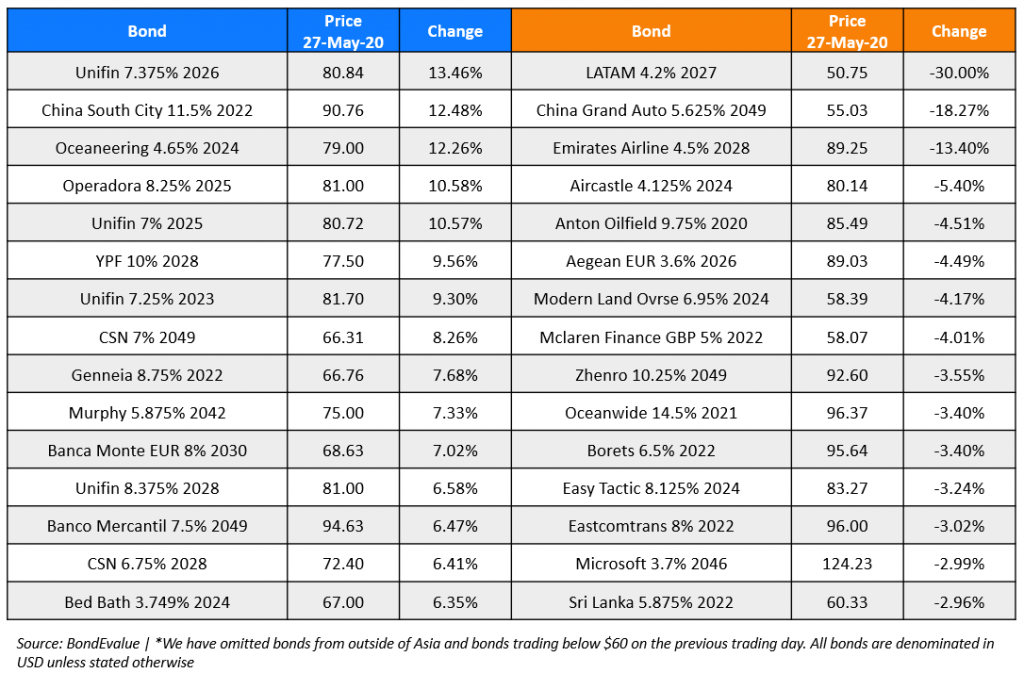 On US Economic Recovery And Unemployment Rate – Fed’s James Bullard

“Growth right now is probably the worst it’s ever been” with much of Wall Street predicting a “minus 40%” contraction in second-quarter economic growth, Bullard said. “The third quarter very likely, right behind the worst quarter, will be the best quarter of all time on the growth perspective.” Although the jobless rate was 14.7% last month, “I think we will be under double digits by the end of the year,” he said.

“You could see a fairly rapid recovery,” Mr Dimon said Tuesday at a virtual conference hosted by Deutsche Bank AG. “The government has been pretty responsive, large companies have the wherewithal, hopefully we’re keeping the small ones alive.” Dimon, who runs the largest U.S. bank, pointed to economists’ forecasts that show unemployment spiking to around 18% this quarter, then falling to 14% in the third quarter and declining to about 10% or 11% by the end of the year.

On Lufthansa’s Bail Out – Michael O’Leary, chief executive at Ryanair

“Lufthansa is addicted to state aid,” Mr O’Leary added, arguing that the €9bn bailout would allow the group to “engage in below-cost selling or buy up even more competition for the next number of years”. Mr O’Leary plans to lodge an appeal against the rescue package, which he said would “further strengthen Lufthansa’s monopoly-like grip on the German air travel market”.

On Soaring Public Debt in the Eurozone – ECB

The ECB, which is due to update its economic forecasts and review its monetary policy next week, has predicted that the eurozone will suffer its deepest postwar recession this year, with GDP set to contract by between 5 and 12 per cent. It warned on Tuesday that a more severe downturn than expected risked putting public finances “on an unsustainable path in already highly indebted countries”, if combined with higher government borrowing costs and borrowers’ defaults resulted in loan guarantees being called in by lenders.

“We do expect yield-curve control by year-end,” she said . Fed Chairman Jerome Powell and his colleagues paint a bleak picture of the economy’s near-term prospects, and they’ll need a strategy to deal with that, she added . “They can’t keep a negative economic outlook without easing monetary policy further.”