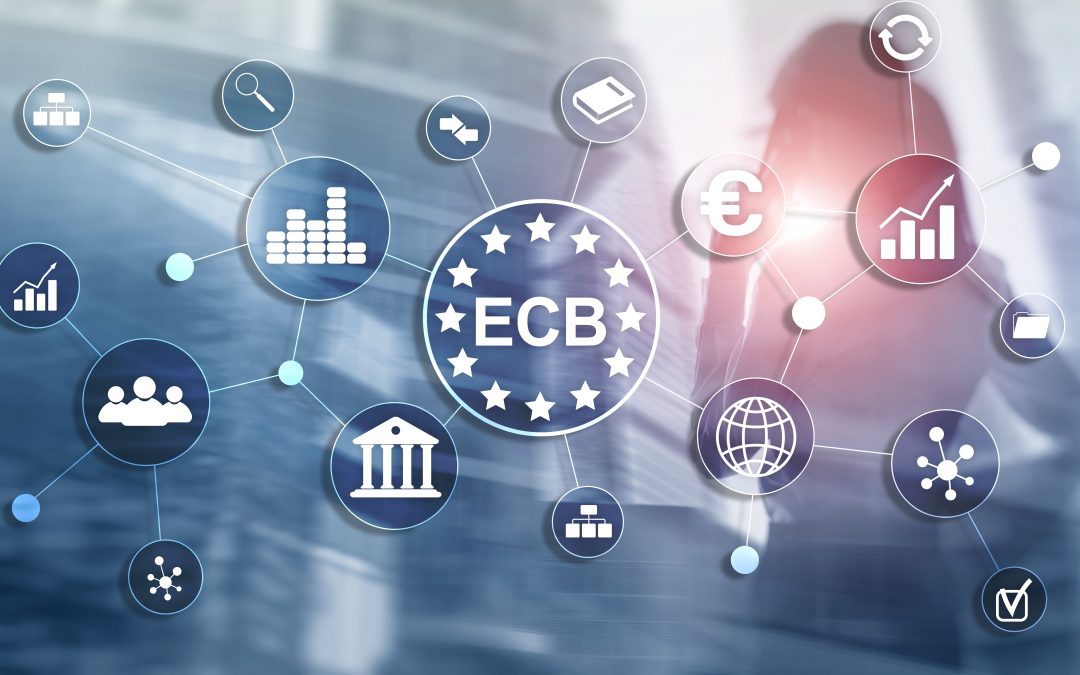 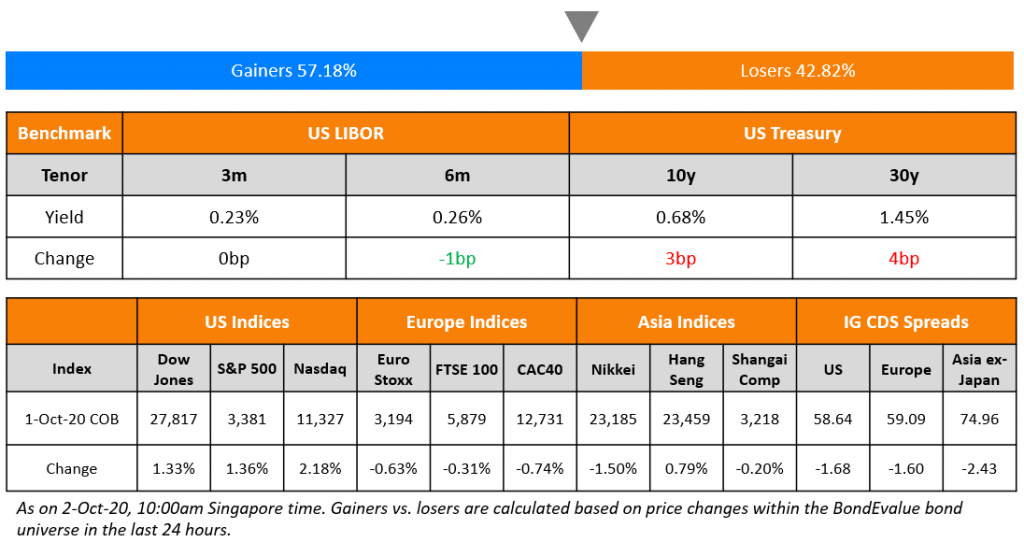 US equities ended slightly higher by 0.5% even as tech led the way with NASDAQ up 1.4%.The Institute of Supply Management (ISM) Manufacturing number printed at 55.4 indicating pick-up in manufacturing activity in the US. Jobless claims for the week ending September 26 was also a positive, coming at 837,000 after the previous two numbers showed a pick-up. Today’s NFP (Nonfarm Payrolls) data is expected to print at ~850,000. Meanwhile, the US House passed a $2.2tn fresh relief plan while it is likely that the Senate might reject it – House speaker Pelosi mentioned it might be difficult to get an agreement before the election. US President Trump tested positive for the coronavirus today, which sent S&P Futures down ~45 points (1.3%) and 10Y Treasury yields down 3bp. This comes after close-aid Hope Hicks tested positive earlier in the day. In Europe, Manufacturing PMIs showed a pick-up over the previous month with Spain and France coming out of contraction territory. Most IG and HY CDS spreads were flat yesterday. Asian equities opened slightly higher today ~0.2%. The primary markets in Asia remain quiet with no new deals. 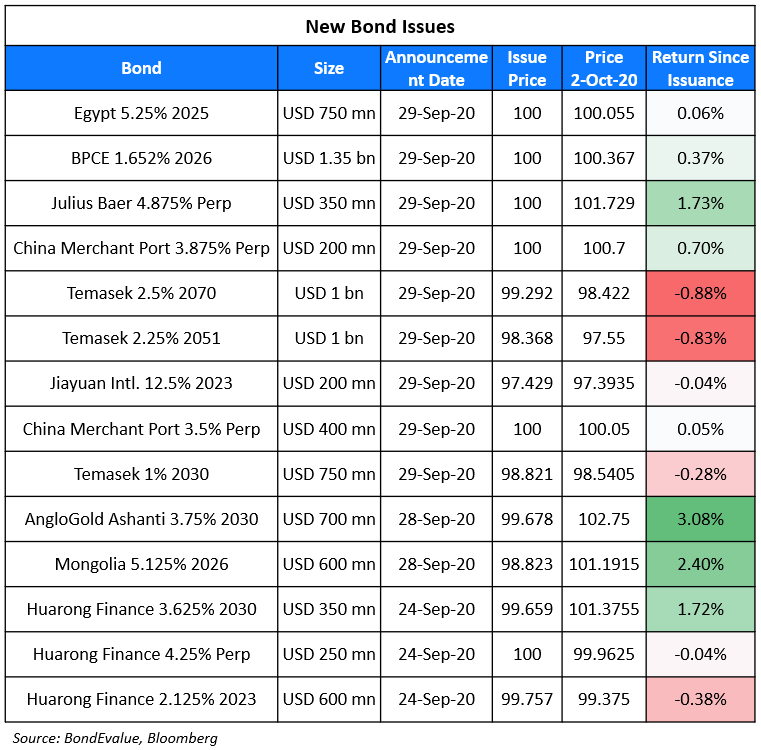 The latest European Central Bank (ECB) weekly release shows that their purchases of corporate bonds have increased by €2.6bn for the week ended September 25. This was 30% higher than their purchases for the prior week and more than twice their purchases in the beginning of September. The net purchases of corporate bonds in the week as part of their Corporate Sector Purchase Programme (CSPP) was the highest since the week ended July 10, when purchases were at €3.3bn. Since March, they have increased holdings of corporate bonds by ~€40bn. “The ECB may buy more of certain bonds if it thought a sector was coming under pressure and had downgrade risk…they’ll likely have been a bit concerned by some of the corporate bond volatility we saw in March with spreads blowing out” said Stephen Caprio, credit strategist at UBS. WSJ reported that the ECB has been active across transport, auto, oil and gas and utility companies with names like Airbus, BMW, Volkswagen, Daimler, Royal Dutch Shell, Total SA and EDF being purchased. 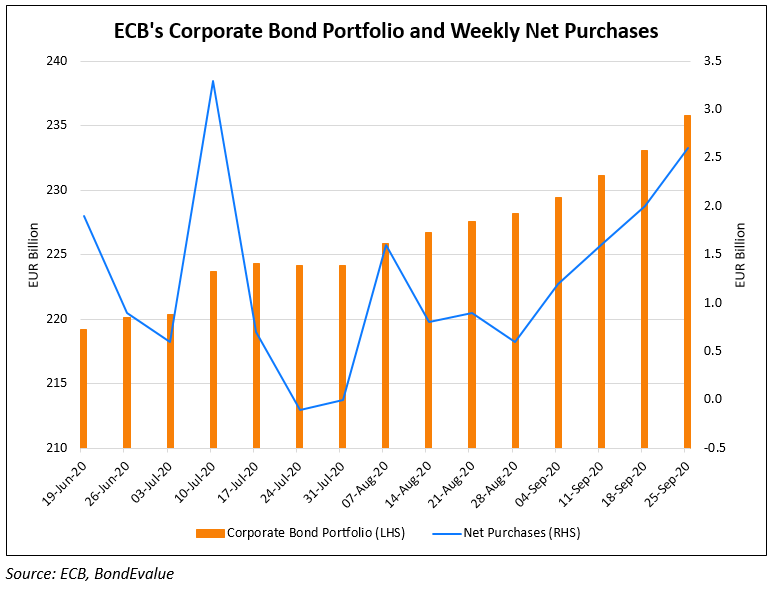 Rolls-Royce plans to raise around £2bn ($2.6bn) via a rights issue and at least £1bn ($1.3bn) via a bond as part of a recapitalization plan. Besides this, they also plan to raise £1bn ($1.3bn) from a 2Y term loan facility. Rolls Royce has also received support in-principle from the UK Export Finance for extension of its 80% guarantee (taken in August) to back an increase of its £2bn ($2.6bn) 5Y term loan of up to £1bn ($1.3bn) – conditional on the rights issue. The share and bond issuance will be an effort to improve liquidity and reduce balance sheet leverage over the coming year. The £1bn ($1.3bn) bond offering is expected to be denominated in dollars, euros and sterling. The timing of the issuance is yet to be decided. Besides the overall package, the jet engine maker is also planning a disposal of identified assets to the tune of £2bn ($2.6bn). Current net debt stands at £1.7bn ($2.2bn) due to the pandemic, prior to which they had a net cash position of £1.4bn ($1.8bn). The company expects net debt to rise to £3.5bn ($4.5bn) by year-end. Reuters mentions that if all loan facilities are tapped, net debt would rise to about 4x FY21 EBITDA excluding disposals. “This is a comprehensive package which will take any liquidity questions off the table through this crisis” said CEO Warren East. Rolls Royce is a fallen angel, having been downgraded to BB from BBB- by S&P in May and to BB+ from BBB- by Fitch in August. Just last week, it was downgraded by Moody’s from Ba2 to Ba3.

The London-based company’s stock traded lower by 10% on Thursday on the massive capital raise announcement. Its dollar bonds traded stable with its 3.625% 2025s currently trading at 93.5, yielding 5.1%.

American retail chain Bed Bath & Beyond reported earnings for its second quarter ended August 29 on Thursday. It reported revenues of $2.69bn vs. $2.6bn expected and adjusted earnings per share (EPS) of $0.50 vs. a loss per share of $0.23. Unadjusted net income came in at $217.9mn translating into an EPS of $1.75 vs. a loss of $138.8mn (EPS of -$1.12) last year. Earnings for the quarter were boosted by its online business, which reported an impressive 89% growth in revenues for the quarter. This helped it report a same-store sales growth of 6%, its first quarterly growth in the category since 2016. Online sales accounted for 32% of its revenues up from 18% a year ago. CEO Mark Tritton commented on the earnings in an interview with CNBC stating, “When home is everything, we’re really poised to be the epicenter of that. We were agile about getting after that.”

Stronger than expected earnings coupled with its earlier announcement of same-day delivery nationwide prior to the holiday season boosted investor sentiment, sending its stock and bonds soaring. Its stock closed 25% up at $18.74 on the Nasdaq while its 4.915% and 5.165% bonds due 2034 and 2044 rose by 10% and 9% to 85 and 81 cents on the dollar respectively.

Rating agencies have come into action after unitholders’ approval for the debt funded merger of Singapore based CapitalLand Mall Trust (CMT) and CapitaLand Commercial Trust (CCT) late in September.  Moody’s downgraded CMT to A3 from A2 while upgrading CCT to Baa1 from Baa2 yesterday. It has changed the outlook to negative from under review for CMT while maintaining a stable outlook for CCT. S&P had assigned an A- rating to CMT and upgraded CCT’s rating to A- just a day earlier. Now both rating agencies hold a similar rating on CMT while S&P holds CCT one notch higher compared to Moody’s. The merger between the two companies is likely to be completed by November this year. The rating actions reflect the rating agencies’ views that the leverage of CMT would increase post its merger with the more-indebted CCT.

According to a Moody’s analyst, “The downgrade reflects our expectation that CMT’s credit metrics will weaken and remain at levels no longer consistent with its A2 rating, driven by the merger with CCT, which has a weaker leverage profile, coupled with the incurrence of around SGD1 billion in incremental debt to fund the merger’s cash consideration,”. S&P in its ratings commentary said, “CMT has strong asset quality as the largest retail REIT in Singapore. It will be the second-largest REIT in Asia-Pacific by market capitalization after CCT merges with CMT.”

Occidental to Sell Its Colombia Assets for $825 Million

The highly leveraged Occidental Petroleum has reached an agreement with Carlyle Group to sell its Colombia assets for $825mn. The sale, which is likely to be completed by Q4 will see an end to the onshore presence of the oil giant in Colombia. The company, which has been in the South American country since the last 40 years through a joint venture with Ecopetrol, will now only have limited offshore presence. Occidental’s finances have been under pressure since it outbid Chevron to purchase Anadarko Petroleum Corp in August last year. The transaction had saddled OXY with a $40bn debt pile. As of June end, the oil producer had total outstanding long term debt of $36bn, according to Refinitiv data. Occidental is also looking at divesting other assets to service its debt and could sell some of its assets in Wyoming, Colorado and Utah to Orion Mine Finance for ~$1.33bn. The oil major was downgraded by Moody’s to Ba2 with a negative outlook in June this year due to the slowdown in the petroleum sector and the high leverage of the company. Occidental Chief Executive Vicki Hollub said, “We have expanded our strategic partnership with Ecopetrol to the onshore U.S. and to exploration blocks offshore Colombia,” while adding, “These highly prospective offshore blocks hold tremendous potential that could significantly bolster the country’s energy resources.”

Total Loss Absorbing Capacity (TLAC) is an international standard designed for banks, particularly Global Systemically Important Banks (G-SIBs) by the Financial Stability Board (FSB) in 2015 to ensure that these banks have ample equity and bail-in debt in place to minimize tax payer and government bailout mechanisms. Currently G-SIBs are required to hold a TLAC amount equal to 16% in Risk Weighted Assets (RWAs), or 6% of the leverage exposure measure, which will increase to 18% of RWA and 6.75% of leverage exposure measure by January 2022. Securities eligible under TLAC include common equity, subordinated debt, some senior debt and unsecured liabilities with a maturity greater than one year. FSB requires 33% of TLAC be filled with debt securities and a maximum of 67% with equity.
Mizuho raised €1.5bn ($1.75bn) via a dual-tranche bond offering on Thursday with both tranches qualifying as external TLAC under Japanese standards.

On the need for near-zero interest rates for up to 3 years – Robert Kaplan, Dallas Fed President

“I think we’re going to need to keep the Fed funds rate at zero … for the next probably 2½ to three years years,” Kaplan said. ”It could be that long that until we get on track, to have weathered the crisis and are on track to meet our full employment and price stability goals. I don’t know if that’s going to be appropriate. Historically, it wouldn’t have been,” added Kaplan. “With the new framework and our inflation targets, I think we’re going to be more accommodative than we have been in the past, but I don’t know if we want to be committing to keeping rates at zero until we meet these targets.”

“One of the unusual things about this pandemic has been consumer income and consumer spending has stayed resilient, and a big reason why is fiscal support,” Kaplan said. “I think it would create downside risk if we weren’t going to get that fiscal support.”

On the ECB considering Fed-style strategy of inflation overshoot

“If credible, such a strategy can strengthen the capacity of monetary policy to stabilise the economy when faced with the lower bound,” she said. “This is because the promise of inflation overshooting raises inflation expectations and therefore lowers real interest rates.”

“The more widely we interpret our mandate, the greater the risk that we will become entangled with politics and overburden ourselves with too many tasks,” he said. “As a consequence, our independence might be called into question, and rightly so.”

“If necessary, we could adjust and recalibrate it in the future,” Guindos said. “We have not taken that decision yet. And, in my opinion, it’s not necessary for us to take it immediately. It will come, but when exactly depends on the evolution of the pandemic, on the evolution of the economy, on the projections, on inflation, and on the situation in financial markets,” he said. “We are putting a lot of emphasis on avoiding a tightening of financial conditions.”

“Markets are presenting some risks in the form of divergences highlighted by the post COVID-19 recovery phase,” said Blanqué. “The first and most important of these is the detachment of the market from economic reality due to extreme policy support. Central banks will remain accommodative, but markets will ask for additional support, which will come only if conditions worsen materially.” 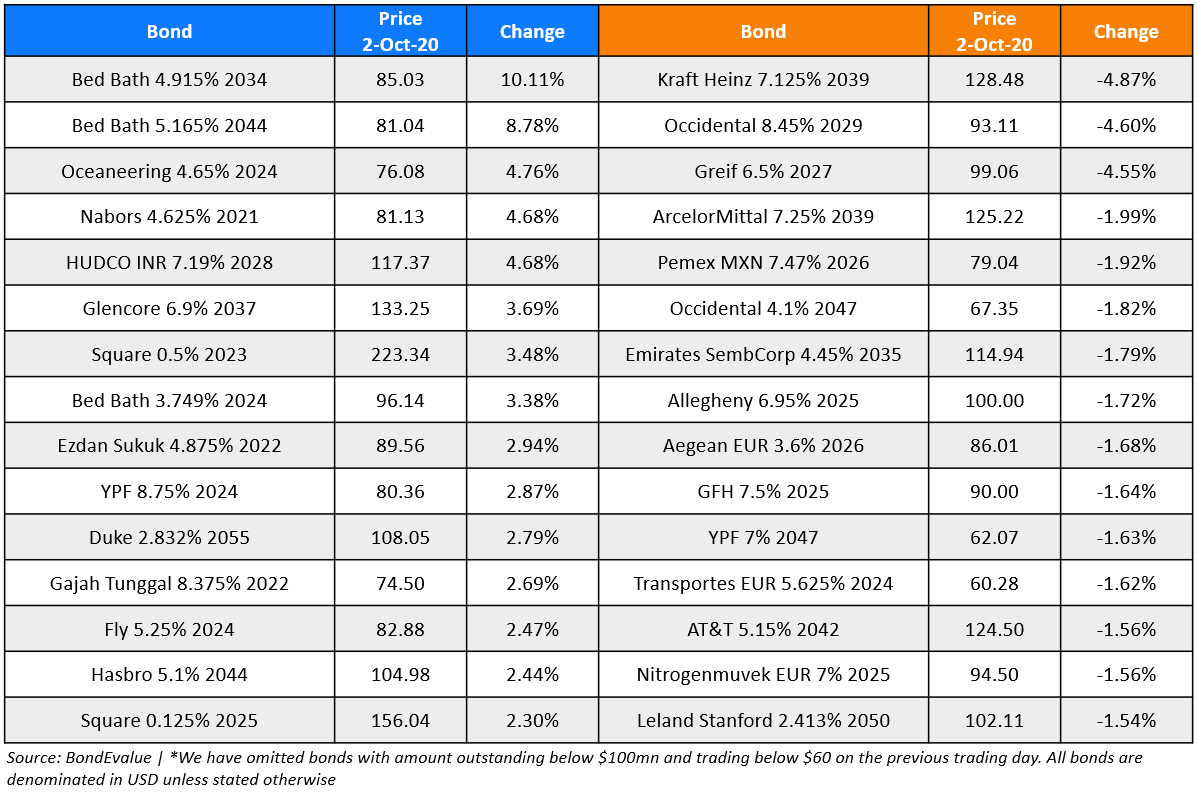