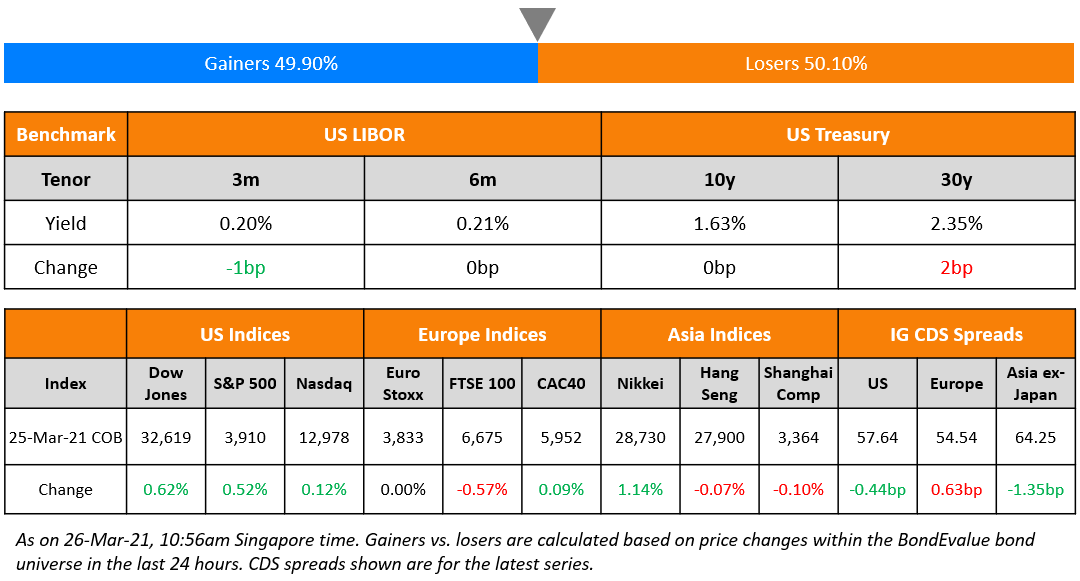 US stocks have had a volatile week so far with the S&P advancing 0.5% yesterday while the Nasdaq was up 0.1%. US Treasuries were flat despite a soft 7Y auction. US initial jobless claims for the prior week came at 684k, falling 97k, below forecasts of 730k. European equities were trading flat in yesterday’s session with only the FTSE down 0.6% as the EU considers limiting vaccine exports to countries with high inoculation rates like the UK. US IG CDS spreads were 0.4bp tighter and HY was 3.3bp tighter. EU main CDS spreads were 0.6bp wider and crossover spreads widened 2bp. Asian equity markets are off to a strong start, up over 1% and Asia ex-Japan CDS spreads are tighter 1.3bp.
Bond Traders’ Masterclass 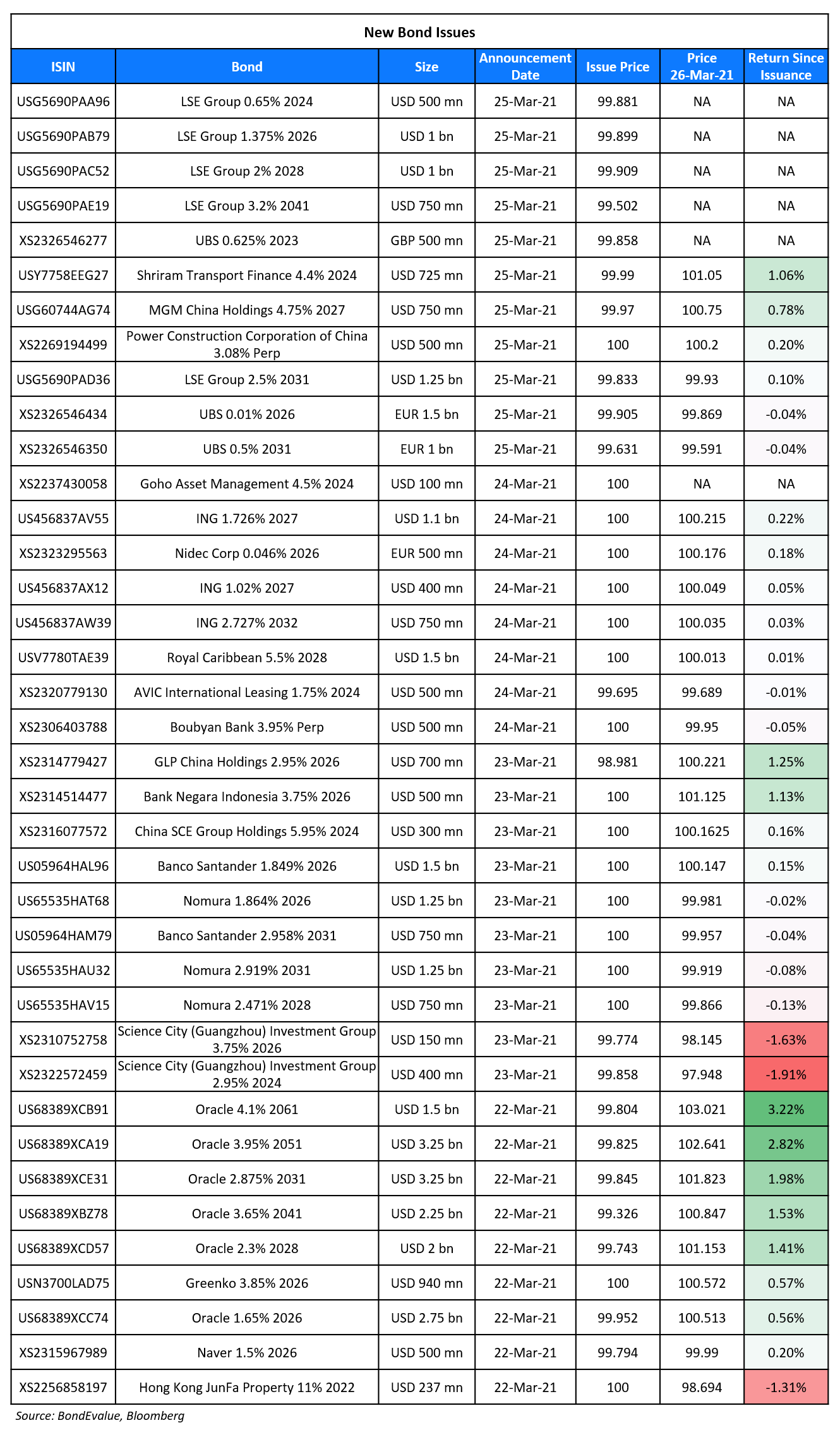 London Stock Exchange (LSE) raised $4.5bn via a jumbo five-trancher. Details are mentioned in the table below:

The bonds have expected ratings of A3/A. Proceeds will be used for general corporate purposes including refinancing debt by LSE Group Plc. and certain subsidiaries in regard to its acquisition of Refinitiv.

Shriram Transport Finance raised $225mn via a tap of their 4.4% social bonds due 2024 at a yield of 4.2%, 20bp inside initial guidance of 4.4% area. The bonds have expected ratings of BB-/BB and received orders over $660mn, 2.9x issue size. Proceeds will be used in accordance with the company’s social finance framework and for on-lent and other activities. The tap was priced at a new issue premium of 23bp over their initially issued 2024s that are currently yielding 3.97% on the secondary market.

UBS raised $3.7bn via a dual currency offering in three parts. It raised:

The bonds have expected ratings of Aa3/A+/AA-.

Bookbuilding refers to the practice of identifying and collecting orders for bonds by investors to help in the price discovery of the new bonds. The underwriters and bookrunners to the issuance essentially are trying to build a book of demand to determine the pricing of the expected bond issuance. These underwriters/bookrunners are generally investment banks that invite investors to submit bids, post which they evaluate the demand and identify the price for the listing of the bond. For example, Shriram Transport Finance’s 4.4% 2024s tap was at its bookbuilding stage at 11:30 GMT where final price guidance was at 4.2%/4.25% vs initial guidance of 4.4% area.

“As we make substantial further progress toward our goals, we’ll gradually roll back the amount of Treasurys and mortgage-backed securities we’ve bought,” Powell said. “We will very gradually over time and with great transparency, when the economy has all but fully recovered, we will be pulling back the support that we provided during emergency times,” he added. 2021 was “going to be a very, very strong year in the most likely case.” “There are of course risks to the upside and downside, but it should be a very strong year from a growth standpoint … Longer run we do have to raise revenue to support permanent spending that we want to do,” he added.

On the need to be patient to allow inflation to rise – Charles Evans, Chicago Federal Reserve President

A burst of inflation for six months “is not nearly enough… patience is something we are going to have to grapple with, probably,” Evans said. “We should be comfortable with a sustainable 2.5% inflation rate for a year; I don’t really get nervous until it starts creeping up to 3%, and even then, I’d like to know how that’s how that’s being achieved.”

On global bond rout not over, another sell-off likely before mid-year

”This is a temporary push higher in yields because of better growth prospects and higher inflation, but ultimately that inflation hump is likely to prove transitory,” said de Groot.

”It may not necessarily be a particular level that alarms the Fed, but more the pace of any move,” said Knightley. ”If yields reflect economic fundamentals then the Fed will be happy, but if they feel things are moving too far too fast, that is what could trigger action from them to control the move in yields.”

”If we are right that yields in the US will continue to rise, that would probably put some upward pressure on long-term yields elsewhere. But we think long-term yields elsewhere will generally continue to rise by less than in the US, for several reasons,” noted Mathews. ”First, we think prospects for economic growth are, for the most part, not as strong outside the United States. Second, in some cases, we think central banks will be more keen than the Fed to ensure long-term yields remain low even as their economies recover.”

“It should be happening as we speak,” said Panigirtzoglou. The rebalancing could already help to explain the stronger bond market performance so far this week, as the transfers are typically concentrated in the last two weeks of the quarter, he added. “But these flows are not going to be the only game in town,” he said.

“Given the rally in equities and sharp bond sell-off, quarter-end rebalancing could be large, out of equities into fixed income,” said Salim.

According to BNP analysts

“Month and quarter-end rebalances do affect markets. However, that impact appears to be more significant when equities have underperformed rather than outperformed bonds,” they said