Cash Strapped Zambia to Takeover Copper Mine From Glencore, Funded by $1.5 Billion Debt 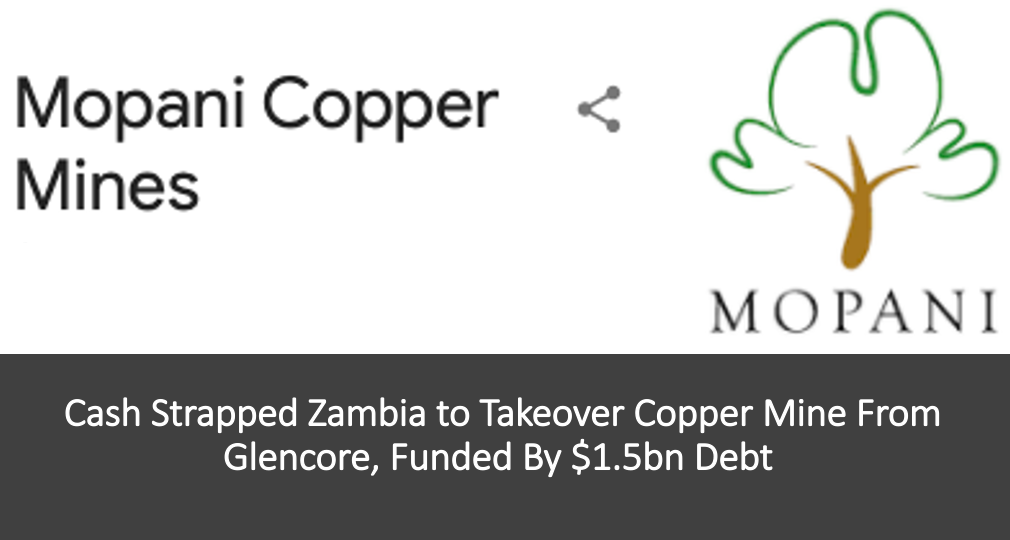 Zambia’s state owned mining investment arm ZCCM-Investment Holdings is set to buy Glencore’s stake in Mopani Copper Mines for $1.5bn. Glencore revealed through a press release that its subsidiary Carlisa Investments Corp., in which it holds an 81.2% stake, has signed an agreement with ZCCM-IH, owner of 10% stake in Mopani to transfer the remaining 90% interest for $1 and transaction debt. The purchase will be funded through additional debt from Carlisa and other members of the Glencore group. The African nation is already reeling under debt after it defaulted on its debt in November 2020. After completion of the sale, Mopani will owe creditors $1.5bn in transaction debt. Under the terms, Glencore will retain off-take rights in respect of Mopani’s copper production until the transaction debt has been repaid in full. The repayment of debt would be by giving the creditors 3% of Mopani’s gross revenue from 2021-2023 and 10-17.5% thereafter. ZCCM-IH will also owe quarterly interest of LIBOR plus 3%. At a ceremony in Lusaka, Mines Minister Richard Musukwa said the country will try to attract a new investor in Mopani, adding that “several entities” from Britain, Canada, China, Turkey, and Qatar have expressed interest. Glencore was looking at suspending operations at the mines last year due to low copper prices and the pandemic induced slowdown which had resulted in the government’s threat to revoke the mining license of Glencore.