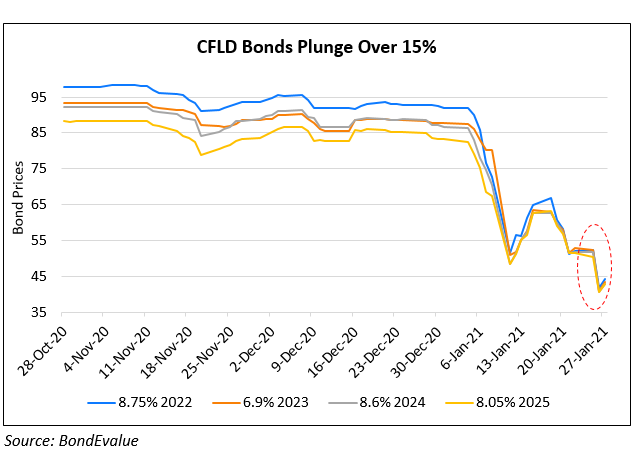 China Fortune Land Development’s (CFLD) dollar bonds took another beating with most of them now trading in the 40’s falling 11 cents on the dollar yesterday. The 8.625% bond due February 2021 was hit the hardest, dropping a record 17.7 cents on the dollar, but have recovered now to 65.4 from 59.34. Bloomberg news cited Reorg Research reporting that China International Capital Corp. (CICC) and King & Wood Mallesons (KWM), have been brought in to get familiarized with the developer’s situation. Sources said that CICC and KWM have started due diligence at CFLD to address debt issues. While CFLD prefers to reach an out-of-court agreement, there’s no certainty creditors will agree to its proposal, the people said.

While the scope of KWM’s report was unknown, they noted that CICC was brought in by the Hebei provincial government to draft a resolution plan for CFLD which could potentially include restructuring options citing unnamed sources. Reorg Research mentioned that the result of Ping An’s talks to extend support to CFLD is expected around the Chinese New Year. The update comes after CFLD reached a settlement with Zhongrong International Trust on repayment of two trust loans over the weekend. CFLD’s 7.125% 2022s were down 11.4 to 41.6 and their 8.6% 2024s were down 11.2 to 40.5 after the news. The bonds have recovered slightly to 44.73 and 42.7 respectively.