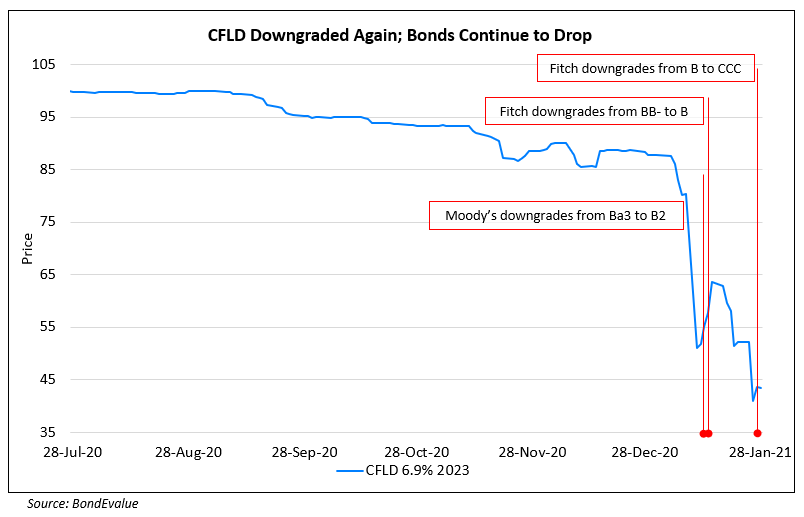 China Fortune Land Development (CFLD) was downgraded two notches by Fitch to CCC from B and with this, the ratings have been removed from negative watch. Fitch had earlier this month cut CFLD and its USD bonds to B from BB-. The latest downgrade was derived due its stressed liquidity and high refinancing risks. In terms of financing, further investments by Ping An (second largest shareholder) may attract regulatory scrutiny as the insurer is subject to insurance regulations, which include strict rules on property-related investments.

Fitch believes increasing uncertainty over CFLD’s access to financing and difficult capital market conditions will expose it to excessive refinancing risks in the near term. They note that CFLD relies heavily on non-bank financing which consists of ~25% of their outstanding debt. Deterioration in any of its short-term debt conditions may have ripple effects on its long-term debt and hurt liquidity. CFLD has sizeable short-term maturities beginning with a $530mn outstanding 8.625% bond due Feb 28 and CNY 27bn ($4.2bn) through 1H2021 and another CNY 10bn ($1.5bn) in 2H2021. CFLD’s cash to short-term debt coverage was at only 0.3x at end-3Q2020. Lack of visibility on addressing short-term maturities also called for the downgrade. CFLD’s leverage as measured by net debt/adjusted inventory plus receivables was at 68% at end-3Q2020. CFLD was also downgraded by Moody’s earlier this month by two notches to B2 and on review for a possible further downgrade. The news also comes after the bonds took a beating on restructuring related news.