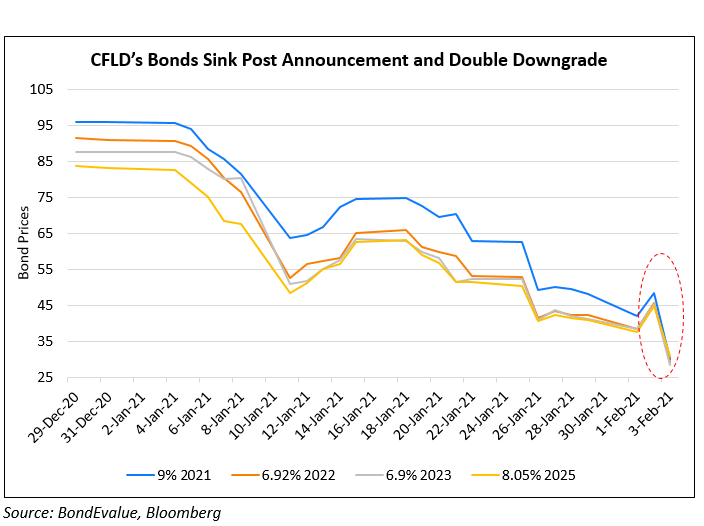 China Fortune Land Development’s (CFLD) has been downgraded two notches to Caa1 from B2 by Moody’s and another notch to CC by Fitch. This is the second downgrade in a week by Fitch after they did a two notch downgrade to CCC last week. CFLD announced yesterday that they missed over CNY5.2bn ($800mn) in payments on its onshore bank and trust loans on Tuesday. A creditor committee has been set up to try to resolve debt obligations and maturities due. Fitch’s downgrade comes after the announcement by CFLD and noted that while the property developer has not missed any capital market debt payments, they will face significant refinancing risks with its $530mn 8.625% 2021s. Besides reasons similar to their downgrade drivers last week, they added that from 4Q20 till the announcement, its net cash outflow excluding shareholders’ support was CNY 37.1bn ($5.7bn) after taking into account debt maturities of CNY 55.9bn ($8.65bn). Unrestricted cash balance was at CNY 800mn ($123.8mn) as of 31 January 2021, while restricted cash amounted to CNY 22.8bn ($3.5bn). Fitch believes CFLD’s unrestricted cash is insufficient to service its upcoming debt due within the next year, ‘in the absence of extraordinary intervention from a third party.’

Moody’s not only downgraded the company, but also changed the outlook to negative from ‘under review’ and downgraded the senior unsecured bonds issued by CFLD (Cayman) Investment Ltd. and guaranteed by CFLD to Caa2 from B2. “The downgrade reflects CFLD’s high liquidity risk, as reflected by its missed principal and interest payments on its onshore bank and trust loans” said Danny Chan, AVP at Moody’s. The downgrade in the bonds was due to structural subordination risks – majority of the claims were at operating subsidiaries which have priority over that of the holding company in the event of bankruptcy. Moody’s highlighted increased liquidity risk, receivables risk and operating performance. Moody’s particularly noted that a one-notch rating uplift based on Ping An’s support to CFLD no longer exists. This is due to the missed principal and interest payments indicating that Ping An would not provide extraordinary timely support to CFLD.

CFLD’s dollar bonds had rallied in the last couple of days after creditors had been asked to extend debt maturities by the Hebei provincial government. The recovery however was short-lived as its bonds have pulled back sharply no, falling over 11-13 points. Majorly, its 8.625% 2021s maturing this month is down 26 points to 30.72.