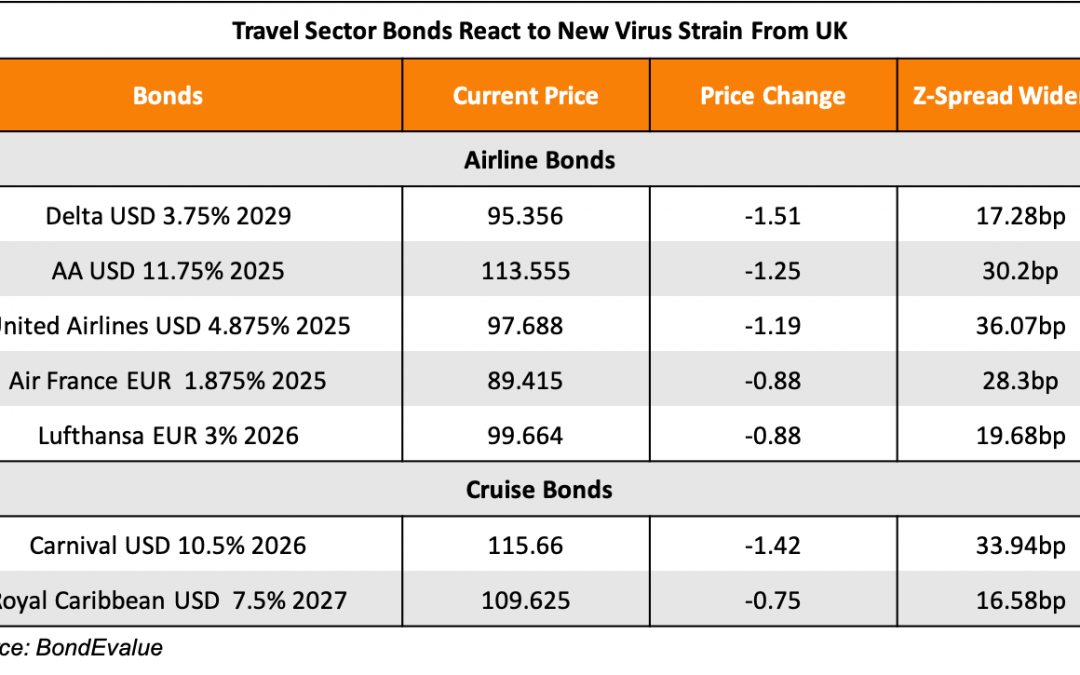 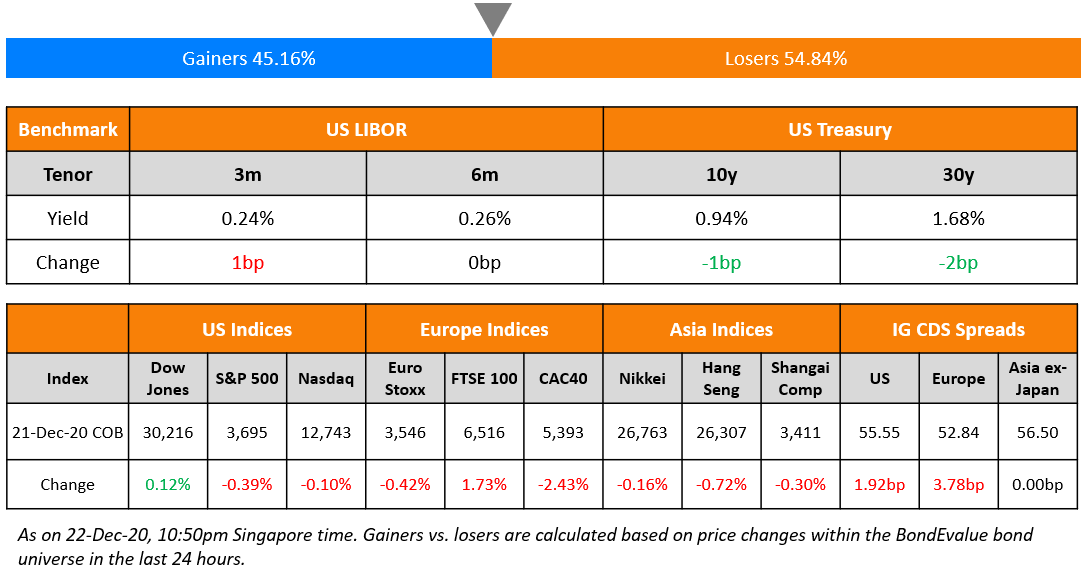 Risk assets slipped globally with S&P and Nasdaq down 0.4% and 0.1% while European equities fell sharply. DAX, CAC and FTSE ended the day lower by 2.8%, 2.4%, 1.7% as news of the new Covid strain took a toll on markets. While UK Prime Minister Boris Johnson offered a fresh proposal to secure an 11th-hour trade deal with the EU, lockdown restrictions and 40 countries’ travel bans on UK arrivals weighed on market sentiment. US 10Y Treasury yields were down 4bp intraday and German Bund yields were down 2bp as investors switched into safe haven assets (Term of the day, explained below). With the ECB’s PEPP purchases ending for the year at €752.3bn ($920bn) “peripherals look vulnerable with investors possibly preferring to secure performance ahead of year-end, and the market preparing for the usual supply wave in January” Commerzbank rates strategist Rainer Guntermann said. The US Commerce Dept. also names over 100 Chinese and Russian companies in their ‘military end-user’ list that includes names like AVIC and Xian Aircraft Industrial. US IG CDS spreads were 1.9bp wider and HY was 9.4bp wider. EU main and crossover CDS spreads widened 3.8bp and 18.5bp respectively. Asia ex-Japan CDS spreads were flat. Asian equities have followed Wall Street, opening lower ~0.3%.

Airlines and cruise operators saw their stocks and bonds trade in the red on Monday after the UK alerted the World Health Organization (WHO) that it had identified a new strain of the deadly Covid virus. After the discovery, Prime Minister Boris Johnson introduced new restrictions in the affected areas and on Christmas celebrations while advising  everyone to stay local. The world was quick to respond with UK’s neighbors closing borders with it and other countries cutting travel to the UK. The new strain seems to have spread fast and the mutated strain has already been reported in the UK, Denmark, Australia, Belgium and the Netherlands.

The optimism of reopening after the news of the vaccine seemed to have changed to a pessimism of a new wave of harsher lockdowns. More than 40 countries including Germany, France, Canada, Argentina, Russia and India have put restrictions on travel to and from the UK as the Brexit deal is still to be finalized. “It’s going to be a tricky week for UK investors,” said Ned Rumpeltin, European head of foreign-exchange strategy at Toronto-Dominion Bank. “But potential for a Brexit deal still remains on the table. That could see the overnight declines reverse just as quickly…” Bond and stock markets across the world reacted to the possibility of more stringent lockdowns and harsher travel restrictions. UK’s longer dated bonds traded slightly lower by 0.5%-1.5% while the British pound was also down. Travel sector stocks reacted sharply with Delta and American down 9% and Carnival and Royal Caribbean down 12% and 10%. Bonds were not spared either, albeit to a lesser extent, as major airlines and cruise shipping bonds were also trending down ~1%. We have listed selected bonds in the table below that were trading in the red on Monday. 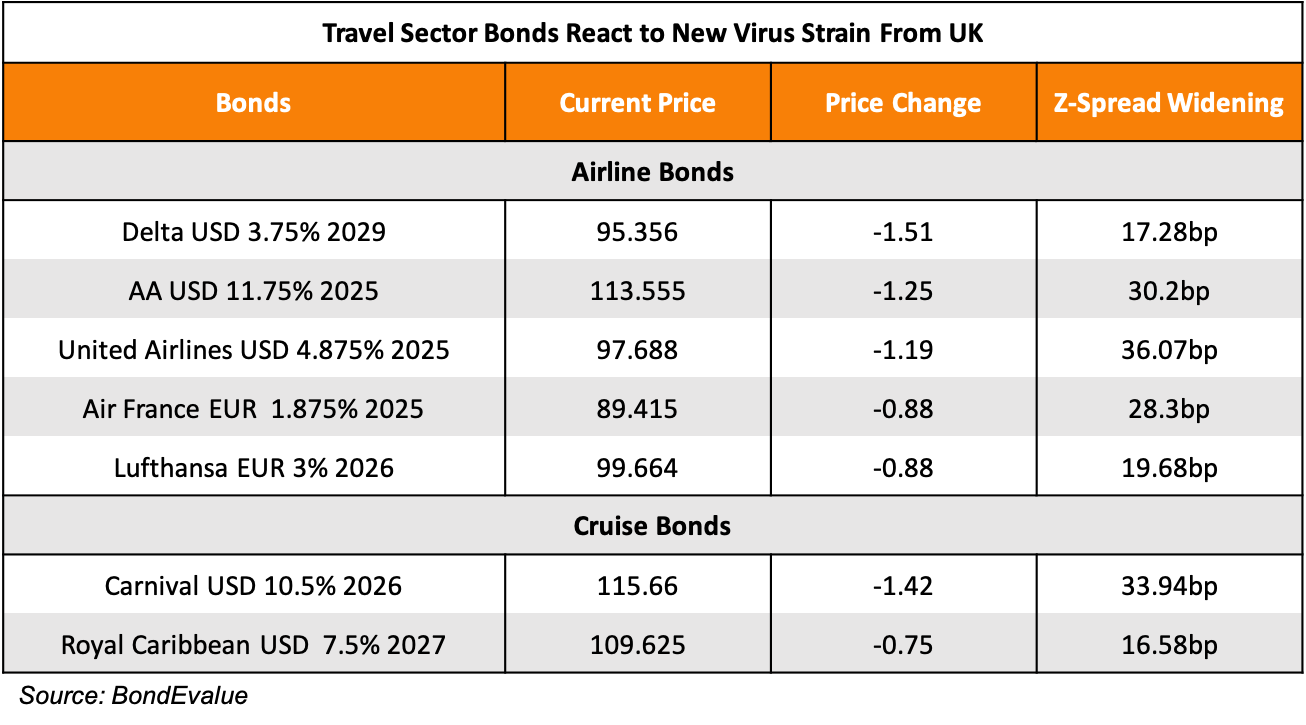 China Fortune Land (CFLD) in a filing with the exchange mentioned that it raised $340mn through a 10.875% 364-day bond issued by its offshore subsidiary CFLD Cayman Investment and guaranteed by CFLD. While the buyers of the bonds were not disclosed, according to Nomura’s trading desk that cited information from the company’s conference call, Ping An Life, CFLD’s second largest shareholder was the buyer. CFLD (Ba3/BB-) last tapped the dollar bond market in September with a $330mn 8.75% 2Y bond alongside a tender offer. CFLD’s dollar bonds were largely stable. Their 8.05% 2025s were up 0.14 to 86 and their 8.625% 2021s were down 0.13 to 98.75.

NMC Health to Sell Fertility Business to Fresenius for $525 Million

Scandal hit hospital operator NMC Health announced that it will be selling its lucrative fertility business Eugin Group to Germany’s Fresenius SE for an enterprise value of €430mn ($525mn). NMC, which at its peak had a market cap of $10bn on the London Stock Exchange was placed into administration in April this year after a fraud was uncovered involving undisclosed debt worth over $4bn. The scandal revelations led to a massive sell-off in its dollar bonds with its 5.95% sukuk due 2023 falling from ~100 levels in early February to ~20 cents on the dollar in early April and 14.67 cents on the dollar currently. The transaction is expected to be completed by the first half of 2021.

Japanese conglomerate SoftBank’s Vision Fund plans to raise $525mn via an IPO of its first special purpose acquisition company (SPAC) known as SVF Investment Corp as per an SEC filing. “Our SPAC will bridge SoftBank’s private and public investing strategies by enabling us to partner with a fast-growing, IPO-ready technology company. We believe that we have access to a wide range of compelling investment opportunities through our broad international presence and deep local networks”, the filing stated. SoftBank has been a large investor in tech companies and is notorious for its ‘Nasdaq Whale’ tag as they bought derivatives on large tech companies stocks through August this year – a notional exposure of a massive ~$30bn via call options on US equities with a $4bn focus on individual US tech stocks. SPACs help take companies public without the hassles of doing a conventional IPO and have gathered steam this year raising ~$60bn according to Renaissance Capital. SoftBank’s dollar bonds were slightly lower – 5.5% 2023s down 0.13 to 106.63 and 6.875% Perp down 0.3 to 99.7.

The Delhi High Court cleared the proposed deal between Reliance Retail (RRVL) and Future Retail (FRL) but allowed Amazon to continue opposing the merger in legal forums if it wishes to do so. “We welcome the verdict of the Hon’ble High Court of Delhi rejecting the interim injunction sought by Future Retail and their claim that the Emergency Arbitrator process is invalid under Indian law,” said an Amazon spokesperson. Expectations are that Amazon would continue its battle on preventing the merger to go through where the global e-commerce giant is already challenging the deal at the Securities and Exchanges Board of India (SEBI) and Ministry of Corporate Affairs (MCA). What the court said in its verdict is a case of “operation successful but patient dead”, said Hitesh Jain, Managing Partner at Parinam Law Associates.

The current order by the Delhi HC follows a ruling by the Competition Commission of India (CCI) around the same time last month where they approved the Reliance Retail-Future Retail deal. Future Retail’s 5.6% dollar bonds due 2025 were down 0.6 to 81.63, yielding 11.4%.

China Aircraft Leasing Group Holdings Limited (CALC) announced via a press release on Monday that it has raised $200mn via its first ever perpetual bond issuance. The bonds were privately placed at a financing cost of 6.4% over LIBOR. As per the release, “The subscriber of the securities is a special-purpose fund initiated by China Everbright Limited (CEL), and all of the $200mn subscription monies came from an unconnected third-party financial institution. As the single largest shareholder of CALC, CEL’s support is instrumental for the successful completion of this issuance.”

Haven assets aka ‘safe havens’ refer to those class of assets/securities which are in demand when market conditions deteriorate. Examples of haven assets include US Treasury bonds, German Bunds, UK Gilts, Japanese Government Bonds (JGBs) and gold. These are in contrast to ‘risk assets’ which are generally those assets/securities that are in demand when market conditions are buoyant, like equities, real estate and high yield bonds.

On Tesla Fuels $166 Billion Bonanza in a Risky Corner

“It’s become interesting to all types of issuers: Cyclicals, alt-energy and health care are well-represented in the convertibles universe…It’s not just the tech names you remember from the dot-com era.”

“We see substantial capacity to repurchase shares,”.  He also flagged Morgan Stanley, BNY Mellon and State Street as beneficiaries, and saw Wells Fargo, PNC Financial Services Group Inc. and American Express Co. as having the least capacity…”We expect most banks to use the full potential capacity for buybacks, given that they now have certainty around the capital return framework for the first quarter, and in light of the fact that the framework could change in subsequent quarters”

We regard the resumption of buybacks as a positive trigger for the banks. The biggest beneficiaries appear to be JPMorgan, Goldman Sachs and Morgan Stanley, which have the strongest trading platforms and have therefore delivered net income above expectations in 2020.

“The Federal Reserve allowing the largest U.S. banks to resume dividends in 1Q is sooner than expected and a positive regulatory signal.”

On New COVID-19 strain inflicts pain on equities and oil

“The initial sell-off was a knee-jerk reaction to the news we saw in the UK. As the day goes on, people are starting to sift through what’s in the fiscal package. In our view, it’s underappreciated”

“A correction is justified but a very strong sell-off would surprise us… because of the vaccine, by next March-April, we should be able to think about normalization again”

On US House approves of $900bn package

Steven Mnuchin, the US Treasury Secretary

“The good news is this is a very, very fast way of getting money into the economy…People are going to see this money at the beginning of next week”

“While we have recognised the urgent need for resources to crush the virus so we can open our economy and schools safely, we must also recognise that more needs to be done. We advance this bill today as a first step. We have new hope which springs from the vaccine and from the commitment president-elect Biden has to following science.”

On Pemex’s Debt Swap & Outlook on the Company

“Cash flow is significant as it keeps banks’ lines of credit available. We remain constructive about Pemex until the end of the year.”

“While the market would love to see something big that finally fixes Pemex – a major recapitalization, tax cuts and asset sales – it is clear that this will not happen under this Administration”

“Pemex bonds had a good week in such a positive context, although proposals for debt swaps or tax cuts in Congress will be far from sufficient in terms of solving the company’s problems.” 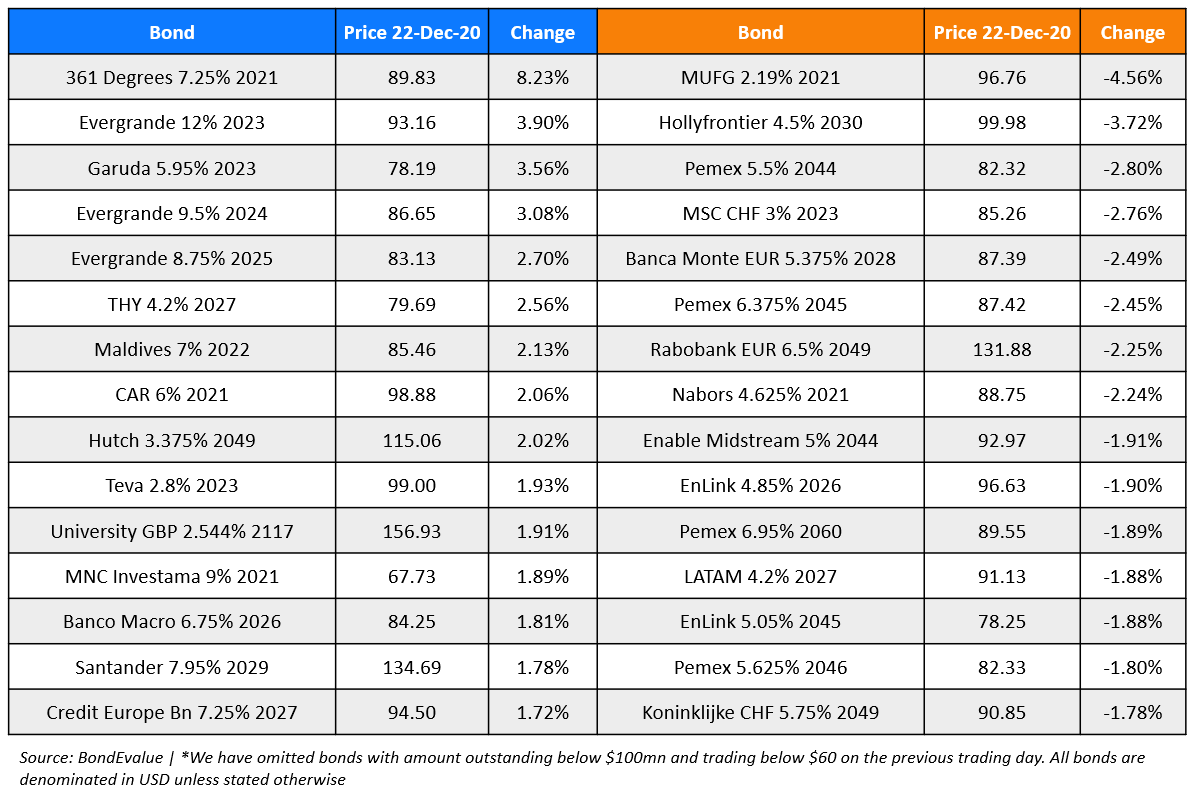