China Fortune Land Development (CFLD), whose bonds fell over 40% in the first week of the new year, saw its bonds recover some of the losses last week. Similar moves were also observed in Greenland Holdings’ bonds, which also fell earlier in the week on CFLD’s woes. Whilst indebted Chinese property developers offer higher yields, concerns remain on the financial capabilities of these companies. Besides lending restrictions by China, the recent defaults by state owned enterprises (SOEs) have also worried market participants given lack of government support– Brilliance Automotive and Tsinghua Unigroup to name a few. But investors fear that SOEs and their local governments to back-out of their obligations with no more bailouts, leading to a lower recovery rate on these bonds. While CFLD is not an SOE, it does a lot of business with local governments. Through public-private partnerships, as of September 2019, it had built nearly 80 new industrial parks, signing up over 3,000 enterprises to relocate into them. The returns on these projects only come in the long-term as municipalities only repay when revenues are generated and not upfront. Bloomberg notes that CFLD’s receivables shot up 41% YoY and if the company is not able to convert any of its receivables to cash, its net debt-to-equity would rise to 263%, higher than Evergrande (currently at 219%). CFLD’s 8.625% 2021s are up 1.2 to 88.3 and their 6.92% 2022s are up 1 point to 66.1. 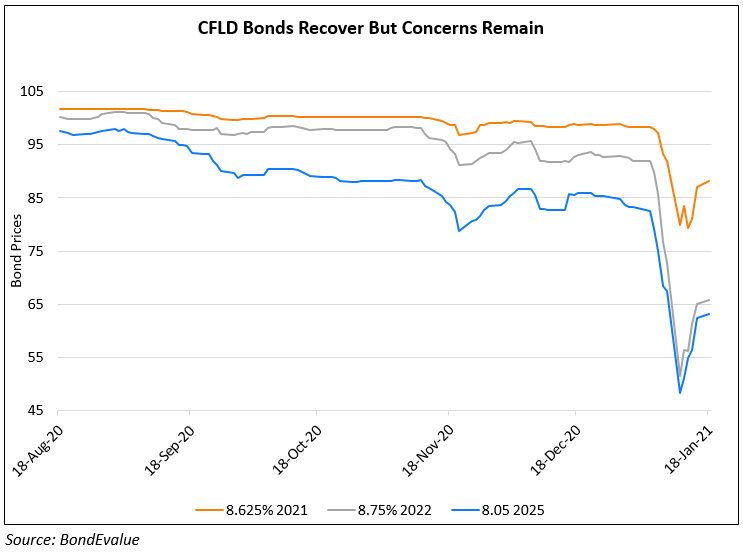