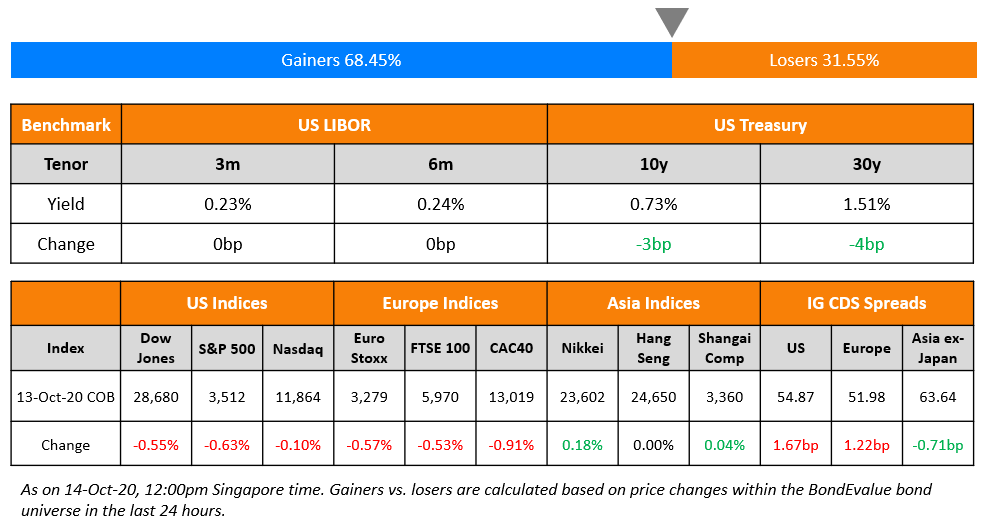 S&P took a breather, ending lower by 0.6% after four days of rally with financials and energy sectors leading the move. Apple ended 2.6% lower while falling almost 7% mid-day after the 5G iPhone event launch. Citi and JP Morgan beat estimates in their Q3 earnings results though their stocks fell 4.8% and 1.5% respectively. The US Senate will vote for replenishing the paycheck program next week according to Senate Majority Leader McConnell. Stimulus hopes before the election also dimmed with House Speaker Pelosi pushing for a revamp of Trump’s and McConnell’s plans. US 10Y Treasury yields fell 3bp to 0.73% on the weak sentiment and core inflation rate at 1.7%, lower than expectations. US IG CDS spreads widened by 1.7bp while HY spreads were flat. European IG CDS spreads widened 1.2bp while Crossover spreads were wider by 9.6bp. Asian markets are lower today by 0.3% while Asia ex-Japan CDS spreads were tighter by 0.7bp. The Asian primary markets are having a busy day with China launching its dollar sovereign bond along with AT1s from BEA and Commercial Bank of Dubai. 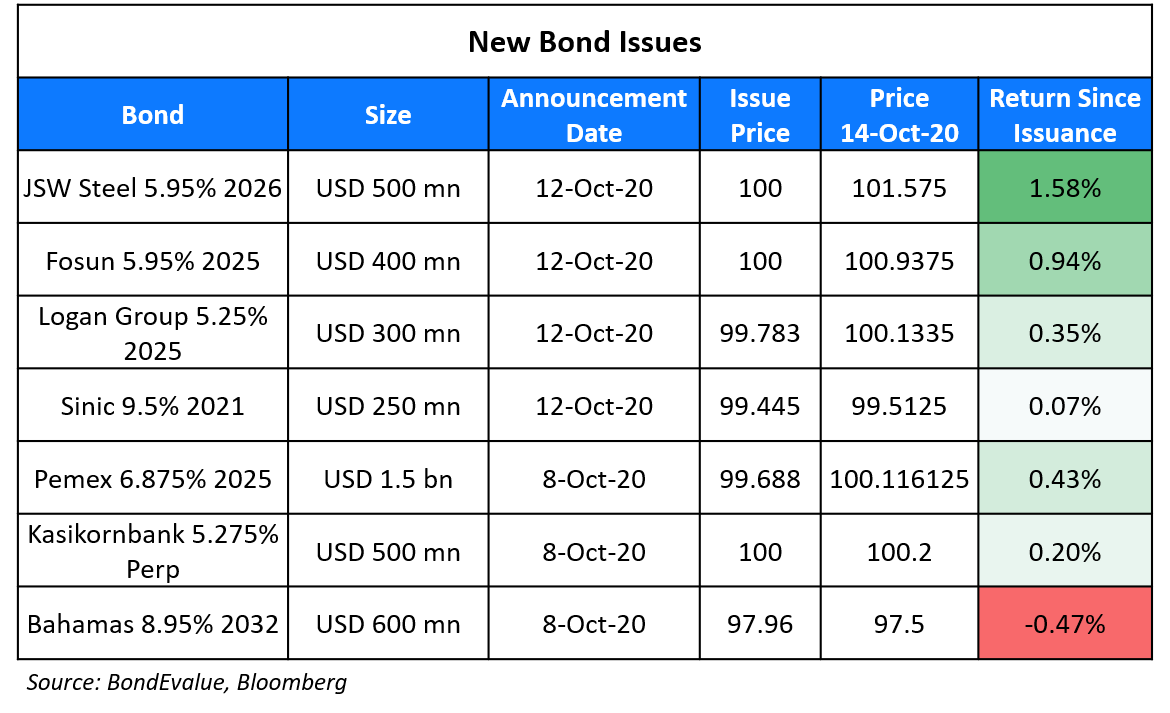 The People’s Republic of China has launched a four-tranche dollar bond offering this morning. Moody’s assigned an A1 rating to these bonds while S&P rated them at A+ and Fitch also at A+, all of them in-line with the issuer’s long term rating. The deal size is expected to be $6bn based on sources from Bloomberg and IFR. Proceeds will be used for general government purposes. Bankers to the current deal involve BofA, Bank of China, CCB, CICC, Citi, Credit Agricole, JPMC, Goldman, Deutsche, Mizuho, CTBC, Standard Chartered and Bank of Communications. Prominent bank HSBC did not feature among the list with reasons not revealed by the bank. However, commentators infer that the an uptight relationship with China of late is a probable reason. Last month, the Global Times reported that HSBC could be put on the “unreliable list” entity. 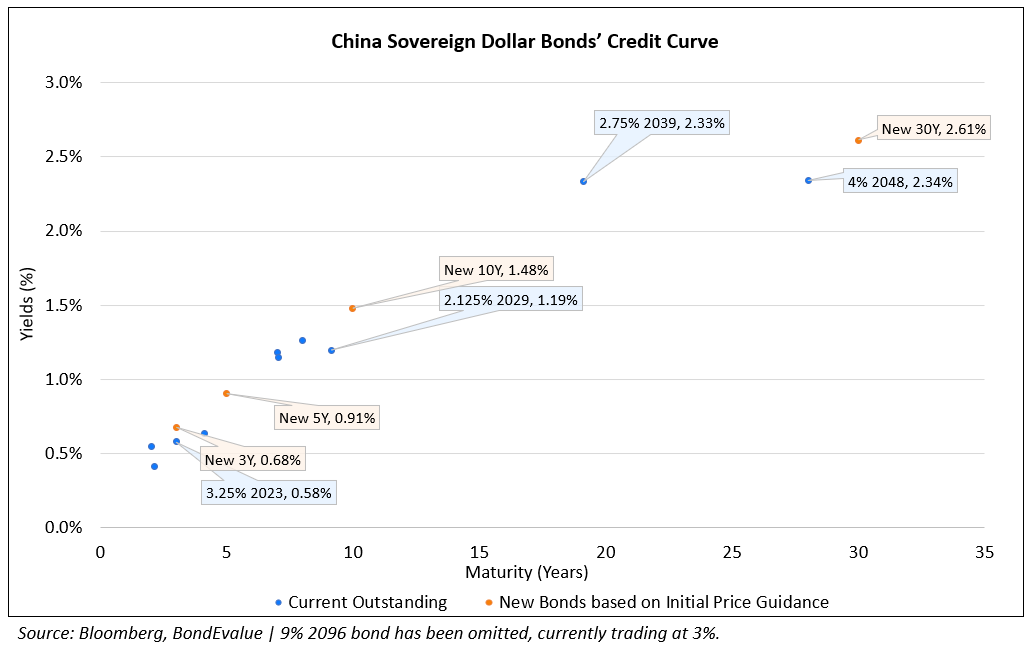 Sri Lanka Turns to China for a $500mn Loan

Sri Lanka is seeking a $500mn loan from Chinese lenders to meet its upcoming obligations of ~$4.5bn in 2021. According to the Chinese Embassy tweet on Sunday, “a $500 million concessional loan” requested by Sri Lanka’s Ministry of Finance is under negotiation. A Sri Lankan official source revealed, “The focus now is on possible investment from China, not just loans”. The tweet comes after Beijing announced a grant of $90mn to the island nation on Sunday after a Chinese delegation led by Yang Jiechi visited Sri Lanka. The Minister for Finance Ajith Nivard Cabraal had criticised a downgrade by Moody’s late last month and had said that the country was exploring multiple options to boost foreign exchange reserves including a $1bn swap agreement with India as well as receiving a $700mn syndicated loan from China. Sri Lanka has also borrowed $500mn in “urgent financial assistance” from Beijing earlier in March.  Treasury Secretary S R Attygalle was confident of repaying the sovereign’s debt even in July. At the time, Sri Lanka had lined up funding from several lenders including ADB, France, the AIIB and the World Bank and had sought a $400mn swap from the Reserve Bank of India. It had also secured part of a $1.2bn loan from China Development Bank with the balance expected in the second half of 2020.

China Evergrande Group sold shares worth HKD4.3bn ($555mn) today to shore up capital to repay debt and working capital purposes. It has sold 260.65mn shares for HKD16.5 each (the lower-end of its pricing range), a discount of 14.7% to its last closing price. As per Bloomberg, the 14.7% discount is wider than that done by other developers this year like Sunac (8.25%) and China Vanke (4.8%). Evergrande managed to raise only about half of what it had planned to sell (up to HKD8.43bn ($1.09bn)) according to Bloomberg yesterday.  With balance sheet debt of over $120bn based on its recent results, Evergrande has aggregate repayments (onshore and offshore) of $4.8bn due in October and November out of its total $34bn due in onshore and offshore bonds. ~24% of its borrowings are denominated in USD and HKD. The share placement should increase cash balances by ~2% based on our calculations from the last released results. “Evergrande having difficulty placing $1 billion, which is not a very big amount relative to its size and previous fundraising, may show that its closest supporters are not willingly stepping in this time…raising $555 million at a steep discount shows signs of desperation” said Kerry Goh, CIO of Kamet Capital Partners. 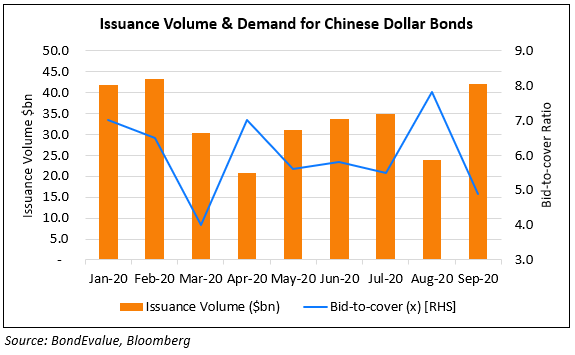 Aramco Looking to Sell a $10bn Stake in its Pipeline Business

Saudi Aramco has hired JPMorgan and MUFG to advise on “Project Seek”, which aims to sell a stake in its pipeline business. The deal would provide liquidity to the oil major at a time when oil prices have been negatively impacted due to lower demand and could help it finance a part of the $75bn dividend pledged during its IPO last year. The deal is expected to be on similar lines to the $10bn gas pipeline infrastructure deal by ADNOC with investors including Brookfield Asset Management. The Abu Dhabi National Oil Company (ADNOC) deal was backed by a $8bn two-year bridge loan which could be replaced with a bond issuance. BlackRock and KKR had also bought a 40% stake in ADNOC Oil Pipelines for $4bn last year. “There’s more work to be done. No buyers have been lined up, but there are talks,” said a Reuters source on the deal. Aramco’s 2.75% 2022s, 3.5% 2029s and 4.375% 2049s traded at 102.8, 111.8 and 123 respectively.

As the name suggests, these are bonds that do not pay coupons. Given the lack of coupons, the price changes in the bond due to a change in interest rates (duration) can be sharper than a bond that has pays a coupon. But the lack of coupon means that there are no reinvestment risks and therefore unless a default occurs, the bondholder will get the stated yield at the time of buying. For example, if a 5Y zero coupon bond that has a yield to maturity of 3% is bought, the investor will get a 3% return if held to maturity since he/she doesn’t have to reinvest any cashflows. Whereas, in a 5Y 3% coupon paying bond that has a yield to maturity of 3%, the investor must be able to reinvest the coupons at 3% consistently over the 5Y period to get a return of 3% – if interest rates fall, he/she would end up with a lower return since the coupons are reinvested at a lower rate.

On the benefits of extending the G20 debt freeze – Vera Daves, Angola’s Minister of Finance

“We are very keen… to have more time regarding the DSSI, the debt suspension initiative,” Daves said. “That is very useful for us”. “We need to remain very conservative and very vigilant to make sure that we remain focused and keep our debt sustainable”.

On US Treasury yields lower as disparate views over the next move on coronavirus aid led to risk-off tone in markets – Kathy Jones, chief fixed income strategist at the Schwab Center for Financial Research

“I think the path of least resistance is probably higher (yields) in Treasuries but it’s a slow move because we still don’t have signs of inflation or excessively strong growth,” she said.

In a note by analysts at global investment research firm Gavekal

“Evergrande’s sheer size and extensive liabilities mean its collapse would be a systemic risk to China,” say analysts at Gavekal. “The firm’s ‘too big to fail’ status illustrates the balancing act the government faces as it tries to pressure developers to get their finances in order while avoiding defaults that would ripple through the Chinese economy.”

“We think Evergrande is systemically important but you can still treat (offshore) bondholders badly,” he said. “Bondholders don’t have collateral. They are in a perilous situation. China has learned with every restructuring to deal more aggressively with bondholders.”

On Mexican regulators clamping down on private investment in energy sector

Geoff Moody, vice-president of government relations at the American Fuel and Petrochemical Manufacturers

“We are very concerned with actions by the Mexican government to deny US energy companies fair market access,” said Moody.

The source said 154 permit applications had been “frozen” by the CRE — the very authority supposed to ensure that the law is applied. “They’re achieving very little but the destruction in terms of investor and regulatory certainty is very big.”

“One of the odd things about the current environment is that JGBs are no longer an obviously unattractive fixed income security, depending on the currency you are funding the purchase in,” said Hutchison.

David Nowakowski, a senior strategist of multi-asset and macro at Aviva Investors

“Many reserve managers buy JGBs and then swap or hedge the currency back into dollars, earning an additional ‘basis’ premium,” said Nowakowski. “Even with a zero yield — in fact JGB yields are slightly below 0% — Japan’s bond market is more attractive than many other countries’ bonds, with Sweden, Switzerland, and core Eurozone countries all having deeply negative yields,” he said. 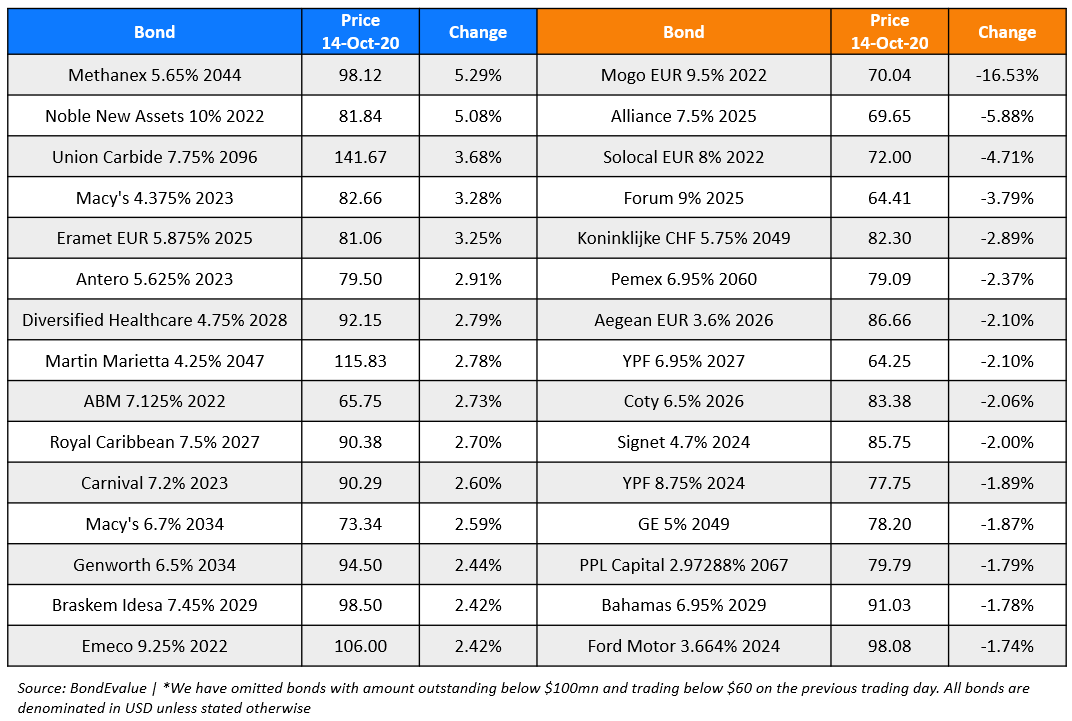