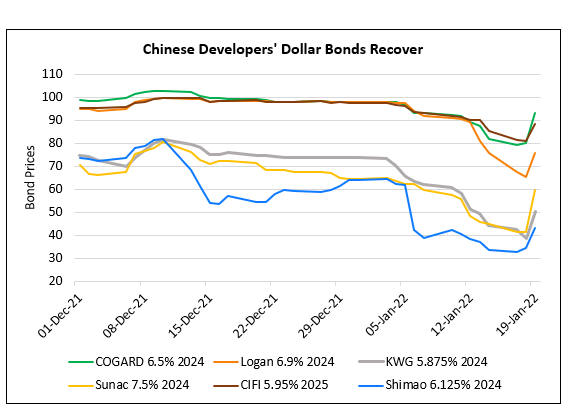 Dollar bonds of Chinese property developers rallied on Wednesday after Reuters reported “China is drafting nationwide rules to make it easier for property developers to access pre-sale funds held in escrow accounts”, citing four sources. Chinese developers are currently allowed to sell residential projects before completion, but are required to put those funds in escrow accounts, which are difficult to access. The funds in escrow accounts have typically amounted to 50-70% of pre-sale funds, sources said. Under the new rules, developers would be able to use escrow funds to complete unfinished buildings at first and for other purposes later. This would thereby help them meet debt obligations, pay suppliers, and finance operations. A source added that the new rules would prioritize onshore debt repayment of companies with better credit profiles. As per Nomura, developers need RMB 210bn ($33bn) each in Q1 and Q2 this year to pay onshore and offshore debt maturities. “This is exactly what we were hoping for… Bringing back some calm, discrimination and sustainable stability or improvement of spreads at least of high quality developers — would already be significant progress”, said Jean-Louis Nakamura, CIO of Lombard Odier APAC.