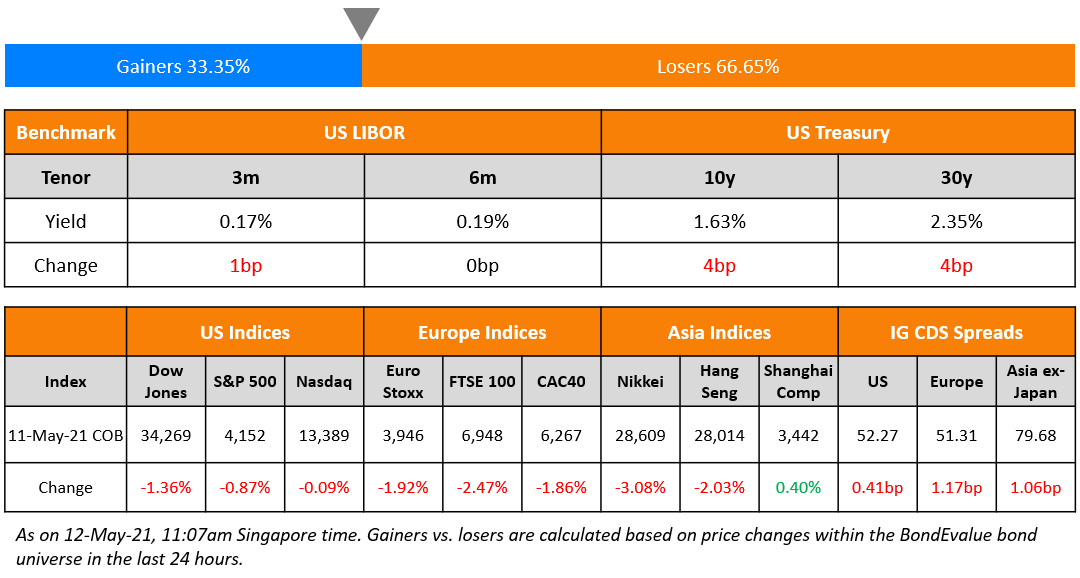 S&P slid 0.9% yesterday while Nasdaq ended 0.1% down after it managed to erase an early decline of 2.6% with dip buying. Energy, financials and industrials led the index lower. Tesla continued its slide and closed 1.9% lower as its April sales in China dipped; its plans to expand its Shanghai plant also took a backseat due to uncertainty on US-China tensions. US IG CDS spreads were 0.4bp wider and HY widened 2.1bp. EU main and crossover CDS spreads widened by 1.2bp and 5.1bp respectively. Most Asian equity markets opened flat while KOSPI is down over 1.5% and Taiwan down 4.5%. Asia ex-Japan CDS spreads were 1bp wider. Asian primary bond markets have cooled off after two busy days ahead of the Hari Raya holiday tomorrow. 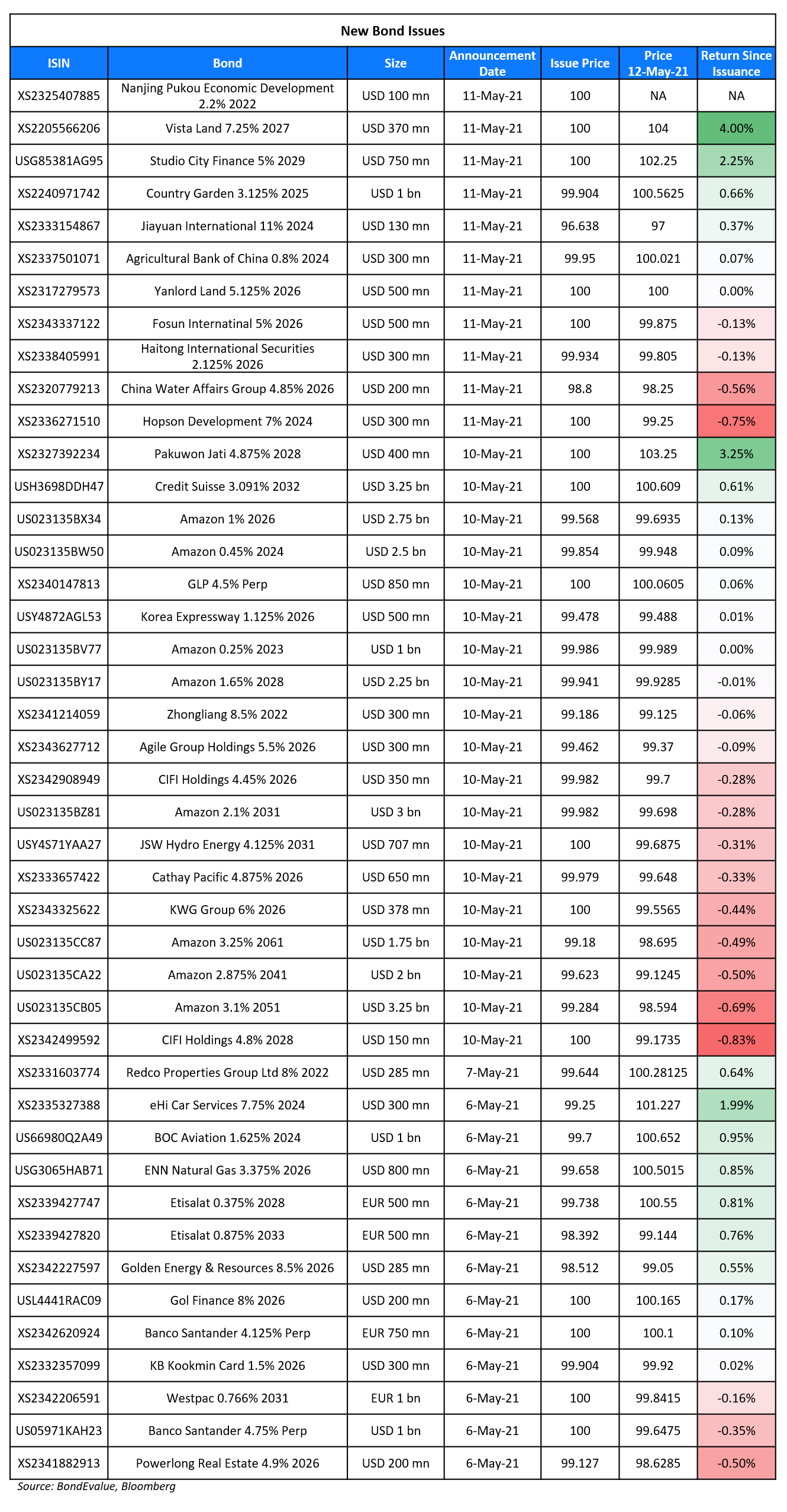 Fosun International raised $500mn via a 5Y non-call 3Y (5NC3) bond at a yield of 5%, 35bp inside initial guidance of 5.35% area. The bonds have expected ratings of BB, and received orders over $2.8bn, 5.6x issue size. Asia took 85%, EMEA 14% and offshore US 1%. Asset/fund managers got 91% of the bonds while banks and private banks got 5% and 4% respectively. Fortune Star (BVI) is the issuer and the Hong Kong-listed parent company is the guarantor. Proceeds will be used for offshore refinancing, including the concurrent tender offer for two of its guaranteed senior bonds, and for working capital and general corporate purposes. The tender offer is for their outstanding $1.025bn 5.25% 2022s and $446mn 5.50% 2023s at a purchase price of $1,014 and $1,008 per $1,000 in principal, respectively. The tender offer is being made as part of a policy to proactively manage its balance sheet and optimize its capital structure. The tender offer will be subject to a maximum acceptance amount to be announced later and acceptance priority will be given to the 5.25% 2022s. The deadline for the tender offer is May 21. The 5.25% 2022s and 5.5% 2023s are currently trading at 101.25 and 100.97 respectively. Fosun’s new bonds were priced tighter to its 5.05% 2027s callable in 2025 which yield 4.99%.

Yanlord Land raised $500mn via a 5Y non-call 3Y (5NC3) debut green bond at a yield of 5.125%, 37.5bp inside initial guidance of 5.5% area. The bonds have expected ratings of Ba3, and received orders over $1.8bn, 3.6x issue size. Asian investors took 92% of the bonds and EMEA 8%. Fund managers and insurers received 80%, banks 5% and private banks 15%. Yanlord Land (HK) is the issuer and the parent is the guarantor. Proceeds will be used for debt refinancing, general corporate purposes and to finance or refinance eligible green projects.

Studio City Finance raised $350mn via a benchmark tap of their 5% 2029s, at a yield of 4.636%, and a price of 101.5 as compared to initial guidance of 101.00-101.50. Allocations were not available for the deal yet. Proceeds will be used to partially fund the capex of the remaining project for Studio City and for general corporate purposes. The deal was upsized from $300mn considered initially.

HDB raised S$900mn via a 10Y at a yield of 1.73%, unchanged from guidance. The bonds have expected ratings of AAA, and proceeds will be used to finance HDB’s development programmes and meet working capital and debt refinancing needs. This is HDB’s third deal of the year, following a S$900mn 7Y bond at 1.37% issued in March and a S$800mn 5Y bond at 0.635% issued in January.

ABC London branch raised $300mn via a 3Y at a yield of 0.817%, 39bp inside initial guidance of T+90bp area. The bonds have expected ratings of A1, and received orders over $1.5bn, 5x issue size. Asia took 97% of the bonds and EMEA 3%. Banks booked 70%, central banks/pension funds/insurers 21%, fund managers 8%, and others 1%. Proceeds will be used for general corporate purposes.

Hopson Development raised $300mn via 3Y non-call 2Y (3NC2) bonds at a yield of 7%, 35bp inside the initial guidance of 7.35% area. The bonds have expected ratings of B+ by Fitch and received orders of $900mn, 3x the issue size. Proceeds will be used for debt refinancing. Asian took 98% and Europe 2%. Fund managers, asset managers and corporates were allocated 46%, banks 31% and private banks 23%.

Haitong International Securities raised $300mn via 5Y bonds at a yield of 2.139% or T+135bp, 40bp inside the initial guidance of T+175bp. The bonds have expected ratings of Baa2/BBB and received orders of $1.2bn, 4x the issue size. Proceeds will be used for refinancing and general corporate purposes. Asia took 99% of the bonds and Europe 1%. Banks booked 74%, fund/asset managers 18%, insurers 6%, and private banks, securities firms and others 2%.

Nanjing Pukou Economic Development raised $100m via 364-day credit-enhanced bonds at a yield of 2.2%, 50bp inside the initial guidance of 2.7% area. The bonds are unrated. Subsidiary Boxinyuan International will issue the bonds and the parent company will provide a keepwell and liquidity support deed and deed of equity interest purchase undertaking. The bonds also have support of an irrevocable standby letter of credit by Bank of Beijing Nanjing branch. Proceeds will be used for offshore debt refinancing and general corporate purposes.

Amortizing bonds are debt instruments that pay both coupons and principal through the life of the bond. Unlike straight bonds that pay back the principal as a bullet payment at maturity, amortizing bonds pay back principal at regular intervals based on a predefined schedule prior to the maturity date. Since the principal is retired slowly over the life of the bond, the weighted average life (WAL) is keenly looked out for. Amortizing structures are more common in loans and mortgages. JSW Hydro’s debut $707mn 10NC5 bond priced on Tuesday was an amortizing bond with a WAL of 7.12Y.

On the bright economic outlook and the need for aid
Lael Brainard, Federal Reserve Governor
“The outlook is bright, but risks remain, and we are far from our goals,” Brainard said. “It will be important to remain patiently focused on achieving the maximum-employment and inflation outcomes in our guidance.” “There is greater-than-usual uncertainty about the economy’s path.” “A persistent material increase in inflation would require not just that wages or prices increase for a period after reopening, but also a broad expectation that they will continue to increase at a persistently higher pace,” she said. “A limited period of pandemic-related price increases is unlikely to durably change inflation dynamics.”
Patrick Harker, Philadelphia Federal Reserve President
“While the economic situation is improving, recovery is still a work in progress, and there’s no reason to withdraw support yet,” Harker said.
James Bullard, St. Louis Federal Reserve President
“It’s too early to talk taper here.” “Even though you can sort of see the end of the tunnel. We’re not there yet. We’ve got to push hard to get all the way to the end.”

“We can take comfort that the euro area in the coming months will take the exact same trajectory, services will also pick up, we expect more than 4% growth over the full year,” he said. “I would argue that there is still significant upside risk actually, and that has to do with pent-up demand.” “Traditionally we have been very conservative within the ECB, assuming in our baseline projections that the savings rate would just return to its pre-corona level, that there would be no pent-up demand taking place,” Knot said. “I personally think that’s a bit of an overly conservative assumption.”
On investors lining up bets against German bonds on pandemic recovery
Sandra Holdsworth, UK head of rates at Aegon Asset Management
“There are a number of things changing that undermine the premium put on Bunds since the euro crisis. [The EU’s bonds] are as good in credit quality as Bunds but they are issued at a higher yield. It cannibalises the demand for the Bund market.”

James Athey, fund manager at Aberdeen Standard Investments.
“The idea of Bunds as a gigantic shorting opportunity has occasionally reared its head over the past 10 years, and it’s usually ended up being a massive pain trade. When things go wrong, Bund yields fall aggressively, and I don’t see why that dynamic should change now”

On inflation driving expectations of European Union’s first rate hike in 2021
Radomir Jac, chief economist at Generali Investments CEE
“The current inflation developments and outlook will solidify the CNB’s view that there is a need to start raising interest rates,” said Jac.
David Nemeth, economist at KBC Group NV
“The Hungarian central bank has room to wait with rate hikes because of the relatively low core inflation level,” said Nemeth.
Zoltan Torok, Raiffeisen Bank economist
“If market players look at the short-run, there are reasons not to be worried, however, the longer-term outlook is less reassuring.”
On PineBridge favoring China sovereign, SOE bonds over riskier credit – in a webinar by Arthur Lau, co-head of emerging-markets fixed income at PineBridge Investments
“We do advocate for investors going into the Chinese onshore bond market at the moment that probably you’d want to focus more on the high-quality space.” “We don’t recommend investors go beyond seven years” for duration. 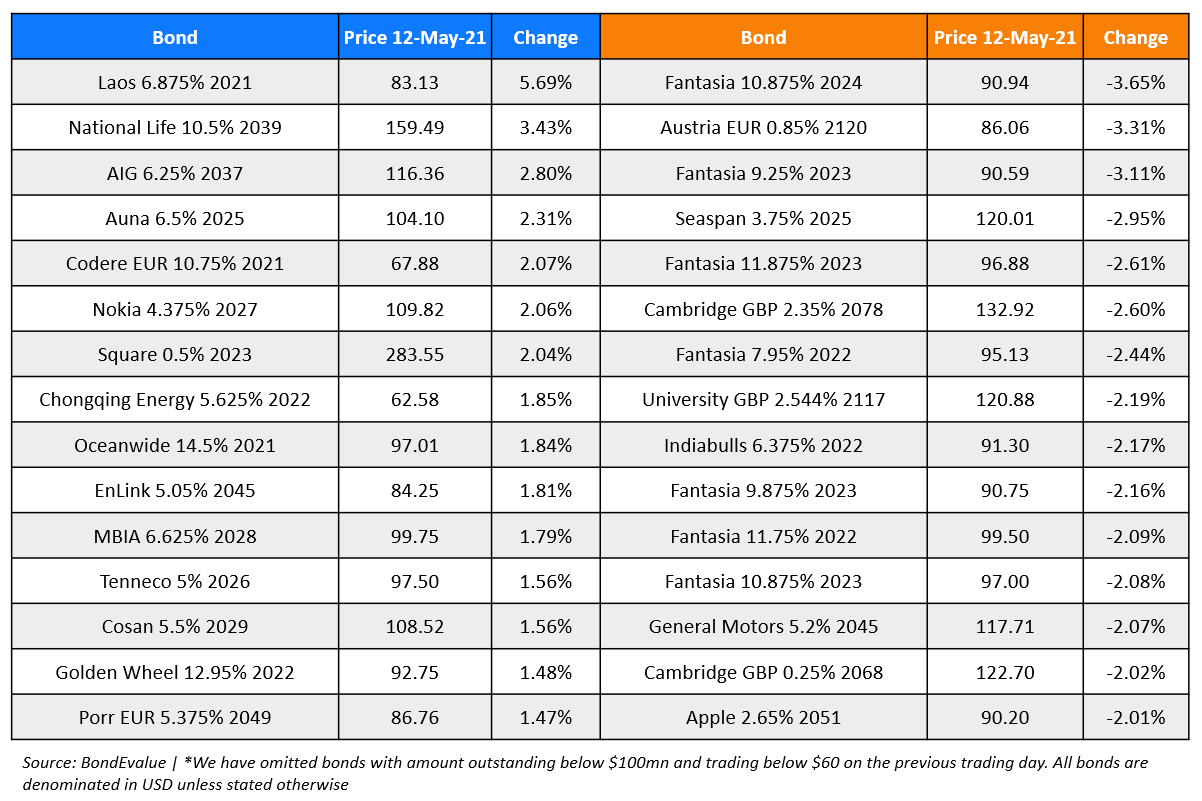