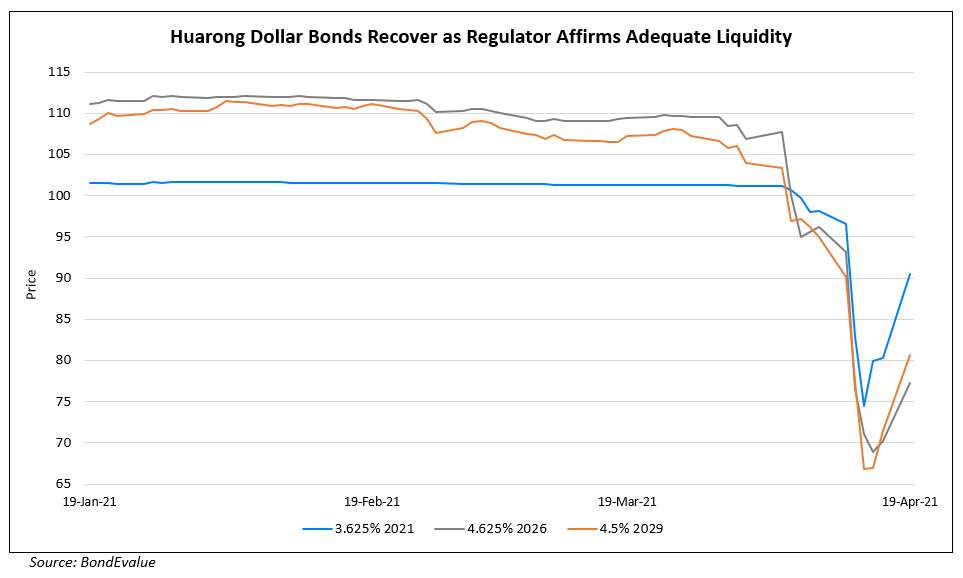 An official from the CBIRC, China’s regulator, commented on China Huarong Asset Management Company (CHAMC) stating that “operations at Huarong remain normal and the company has ample liquidity”, as per Caixin. This is the first official comment after CHAMC’s dollar bonds tumbled since the beginning of the month post delaying its earnings release. Bonds of CHAMC recovered some of the losses after the statement.

The statement by the CBIRC helped provide a bid to CHAMC’s bonds, but it does not indicate any kind of government support yet for the asset manager. “The fact that a regulator finally said something should give the market some confidence… The amazing thing is like many investors, if you asked me a month ago, what is the risk of Huarong restructuring its debt, I would have said close to zero. Even though I still think it’s unlikely, the risk is no longer zero” said David Loevinger, managing director at TCW Group. Sources on Friday said Huarong wired funds to pay a local bond due April 18 and has also prepared funds to pay a $600mn dollar note due on April 27. Separately, the regulators have also asked banks not to withhold loans to Huarong according to Reuters’ sources.