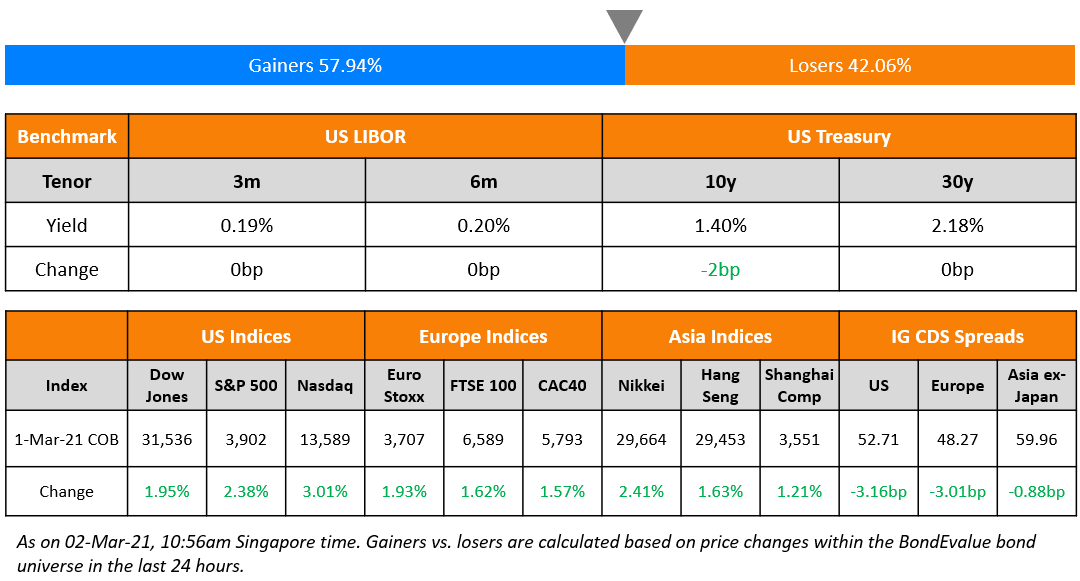 Risk-on sentiment boosted markets with a sea of green as the S&P closed up 2.4% and Nasdaq up 3%, their largest single-day gains since June 5. US 10Y Treasury yields eased slightly to ~1.44%. US ISM Manufacturing PMI came at 60.8 vs. expectations of 58.8, the fastest pace in three years. Some inflationary pressures were seen as the prices paid component in the PMI was at 86, the highest since July 2008. FTSE 100, DAX and CAC rallied over 1.6% and German Bund yields fell 9bp. US IG CDS spreads were 3.2bp tighter and HY was a strong 18bp tighter. EU main CDS spreads tightened 3bp and crossover spreads tightened a massive 18.5bp. Asian equity markets are up 0.5% and Asia ex-Japan CDS spreads are tighter by 1bp. 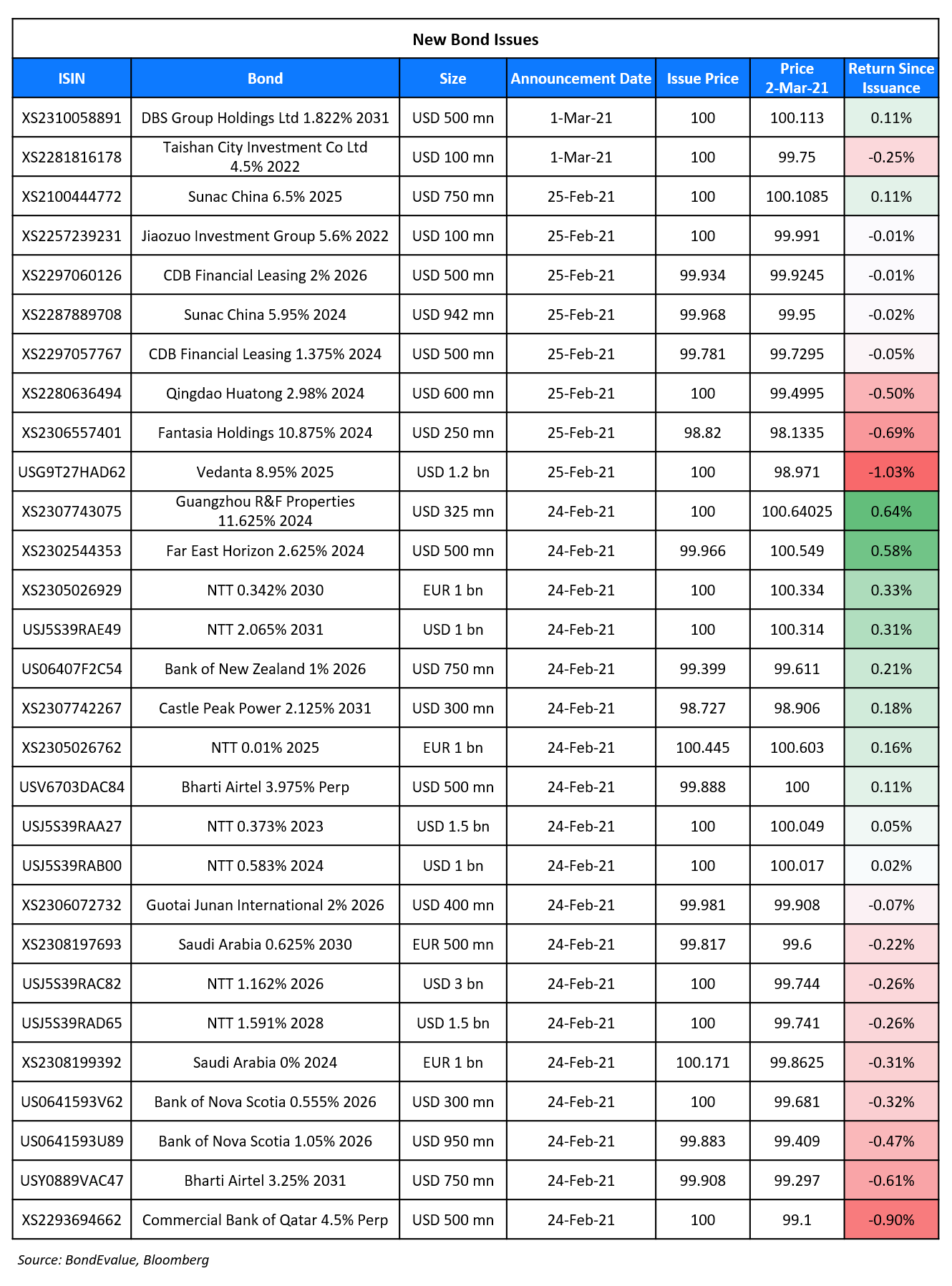 DBS raised $500mn via a 10Y non-call 5Y (10NC5) Tier 2 bond at a yield of 1.822%, or 5Y US Treasuries +110bp, 25bp inside initial guidance of 5Y UST+135bp area. The unsecured and subordinated notes have expected ratings of A2/A, and received orders over $bn, x issue size. They will be written down permanently if the Monetary Authority of Singapore (MAS) declares the bank to be a non-viable entity. They may also be subject to cancellation, modification, conversion and/or change in form if a bail-in certificate is issued under the MAS Act. Proceeds will be used for the finance and treasury activities of the holding company of DBS Group, including intercompany loans to DBS Bank and subsidiaries.

CapitaLand Integrated Commercial Trust raised S$460mn ($345mn) via a 7Y bond at a yield of 2.1%, 20bp inside initial guidance of 2.3% area. The bonds have expected ratings of A3/A-, and received orders over S$700mn ($526mn), 1.5x issue size. Fund managers, insurance companies and agencies took 49%, banks and public sector investors took 41%. Private banks and corporate investors bought 10%. Singapore accounted for 94% of the deal. The bonds will be drawn from a S$7bn ($5.2bn) multi-currency medium-term note (MTN) programme. CMT MTN is the issuer of the bond which will be guaranteed by HSBC Institutional Trust Services (rated A3/A-) as a trustee of the property REIT. Proceeds will be used for debt refinancing, general corporate and working capital purposes.

A bank’s living will is a regulatory requirement imposed on banks that helps guide the liquidation process and reduces the systemic impact on the financial system in the event that the bank goes bankrupt. In the US, living wills were required after Dodd-Frank came into place.

Caixin Global reported that the China Banking and Insurance Regulatory Commission (CBIRC) released draft rules that will require commercial banks, rural credit cooperatives, and financial asset management/leasing firms with consolidated assets of at least CNY 300bn ($46.3bn) to create recovery and resolution plans. Under the draft rules financial institutions should first use their own assets and seek shareholders’ help before asking for government support.

On US central bank not yet troubled by the increase in Treasury yields – Thomas Barkin, Federal Reserve Bank of Richmond President

“I’m mostly concerned about the labor market,” Barkin said. “At these levels of interest rates, when I talk to businesses in my district, I do not hear any sense that people are dialing back their investment.” “We obviously have control of the yield curve at the short end. And at the longer end when it moves it depends a lot on the driver,” said Barkin. “If the driver is — as it seems to be — news about vaccines, ornews about health of the economy, or news about fiscal stimulus, then I think it’s a natural reaction.”

“Inflation is a longer-term phenomenon,” he said. “As I am speaking to businesses in our district I am not hearing a sense of overwhelming desire or intent to be escalating prices beyond normal levels.

Villeroy said part of the recent tightening of financial conditions is due to “excessive spillovers and tensions.” The ECB should start by using its pandemic emergency bond-buying program to drive down yields, he said, and “we continue to stand ready to adjust all of our instruments, as appropriate, including possibly a lowering of the deposit rate if needed.”

”Villeroy’s statement voices the sentiment of most analysts after last week’s events: with the euro-zone growth outlook being weighed down by slow vaccine distribution, the ECB must avoid undue policy tightening,” said Harvey. “However, talk is cheap and the market will need proof of action by the ECB after today’s bemusing data.”

“It is unfortunate timing, if they wanted to send a signal to the market,” said Christiansen. “But they would have been aware of the large redemption.”

On the mismatch between highly tradable ETFs and illiquid bond helpful in stabilising bond market – Karamfil Todorov, economist at Bank of International Settlements

“The flexibility inherent in baskets’ composition may allow ETFs to withstand episodes of market stress,” Todorov wrote. “In the face of panic selling (runs), which generates redemption pressure, ETF sponsors could tilt redemption baskets towards riskier or less liquid securities. This would decrease prices of ETF shares since shares are exchanged for a lower-quality subset of ETF holdings.”

“Such a strategy can backfire in the long run,” Todorov wrote. “If investors perceive an ETF as redeeming only low-quality bonds in stress times, they may withdraw from the ETF altogether.”

“It’s all about bonds,” said Sels, who said expectations for a continuation of “ample” stimulus measures from global central banks provided a “powerful” boost for risk assets.

Gregory Perdon, co-chief investment officer at Arbuthnot Latham
“Last week was an excellent reminder of a very important lesson — the bond market matters,” said Perdon. “But if stimulus cheques get into the hands of Americans fast enough, maybe we will be able to kick the can a little bit further down the road.”

“Subscribers have proven to be very keen on this type of instrument … (and) governments can really make a difference in how the economy and society of a country works,” said Mio.

“The Treasury’s new offer will satisfy demand from both specialized and traditional investors … the demand is potentially high, mainly still unexpressed,” said Mormando.

“Central banks are also considering adjusting their monetary policy in order to favour the transition to sustainable finances,” said Manenti.

“The public pays a higher attention to the climate and environmental issues, but we still need to make sure that behind a ‘green’ label stands a ‘green’ matter”, said Cazzulani. 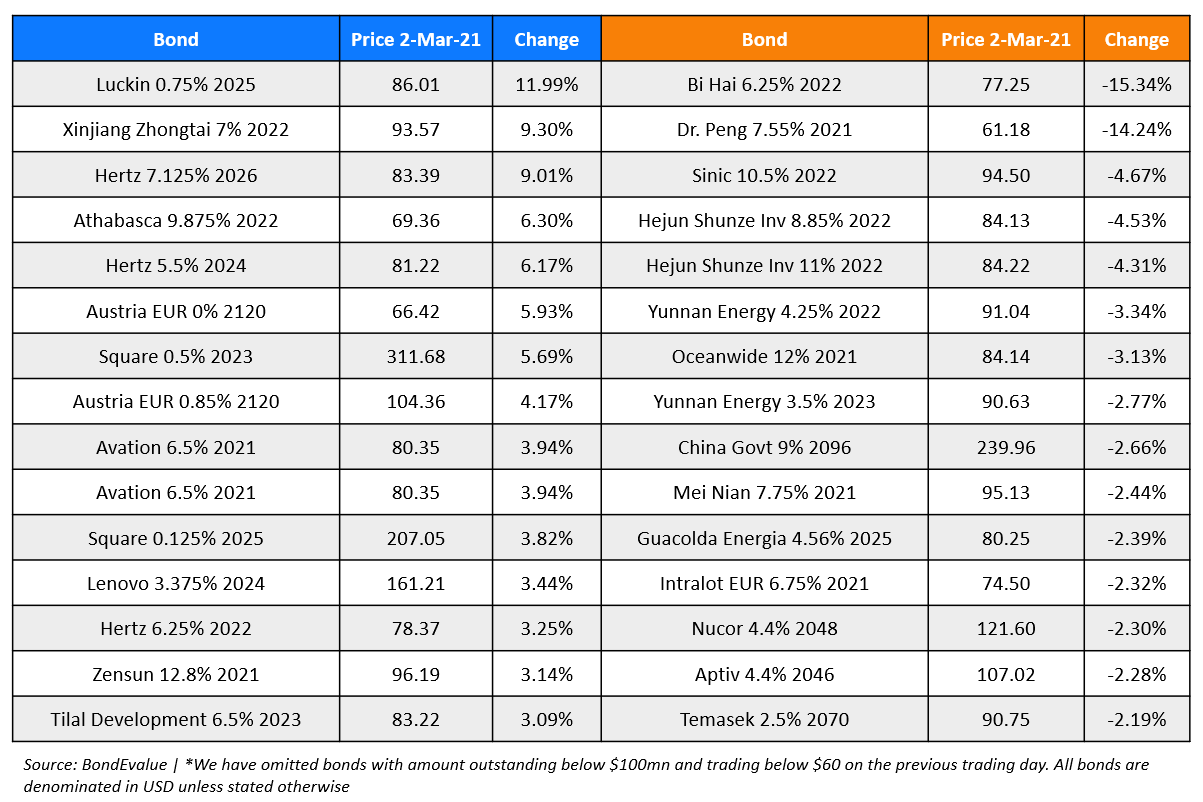