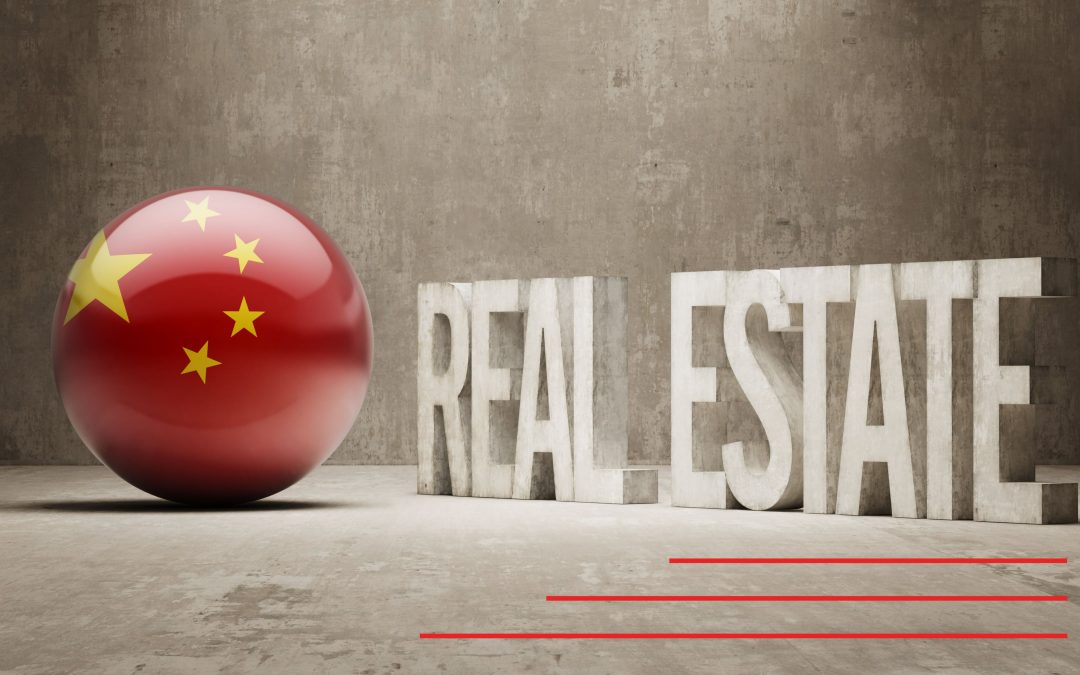 The fall in interest rates globally has seen bond investors flock towards high yield bonds, which have outperformed investment grade bonds this year. The HYG high yield index has delivered a total YTD return of 1.82% vs. the LQD investment grade index that has delivered a total YTD return of -0.42%. High yield bond investors had an overall cheerful Q2 with 69% of dollar bonds in our universe ending the quarter in the green. The EM High Yield Index and the Asia ex-Japan Index are up 1.4% and 0.5% YTD respectively.

However, true to its nature, high yield bonds have had their share of risks, particularly in Chinese dollar bonds. This is on the back of the China Fortune Land Development (CFLD) default in late February, followed by concerns over China’s state-owned distressed asset manager China Huarong after it delayed the release of its annual earnings in April. While Huarong is not a high yield name (not yet at least), its impending restructuring and extent, if any, of state support sent ripples across the Chinese dollar bond market. The Chinese High Yield Dollar Bond index has delivered a total return of -1.2% YTD. Within the Chinese high yield space, we can see that real estate developers’ bonds have been trading weaker with the China Real Estate High Yield index witnessing a sharp drop of around 6% in June and down 3.7% YTD.

Investor concerns over certain Chinese real estate developers is apparent when comparing their dollar bonds’ Z-spreads – a measure of credit, liquidity, and optionality risk in a bond with a widening Z-Spread indicating increased risk and vice versa. The chart below compares the change in Z-Spreads since the start of the second quarter of Chinese property developers’ dollar bonds that mature in 2023.

Most Chinese developers have dollar bonds due in 2023 and hence it serves as a common point to compare spreads across these developers’ bonds. Given that some developers may have more than one bond maturing in 2023, the median Z-Spreads of these bonds have been calculated so that extreme moves are filtered out.

As observed above, Evergrande’s median Z-Spread of its 2023s widened a massive ~1,800bp since the beginning of Q2, the highest among real estate developers. Distressed CFLD and China South City saw a widening of over 1,546bp and 979bp during the period. One pattern that can be observed in the widening Z-Spreads is that of B vs. BB rated names. Commenting on the widening of spreads among developers, Florian Schmidt, CEO of debt consultancy firm Frontier Strategies said, “China property bonds tend to bifurcate in times of negative credit news when liquidity is switched from single-Bs into BBs. Furthermore, negative news or rating actions applied to a specific credit tends to affect bond spreads of other industry players in the high-beta single-B segment. There is a mix of idiosyncratic and systemic risk factors at play.” Indeed, the risks surrounding Evergrande have also hit peers in the real estate sector and can be seen with the Z-Spreads widening across China South City, Fantasia, Modern Land, Road King, Greenland Global and China Aoyuan among others.

Another important factor that has come into focus is Beijing's "three red-lines". The three red-lines are a set of thresholds on three financial ratios, Liabilities (ex advanced proceeds) to Total Assets, Net Debt to Equity and Cash to Short-Term Debt, directed by the People’s Bank of China (PBOC) and the Ministry of Housing that cap developers' borrowings. The measures were announced in 2020 and if a company's three ratios are within the thresholds, its allowable annual increase in debt is 15% in the following year. The three red-lines currently focus primarily on large developers, the likes of Evergrande that breached all the metrics as of its last published numbers. To dig deeper into how the most popular developers are faring on the three red lines, we have listed the three financial ratios (based on last published earnings) for each of them in the table below, with issuers that breach all three red lines at the top and those that are within the thresholds of the three ratios at the bottom. 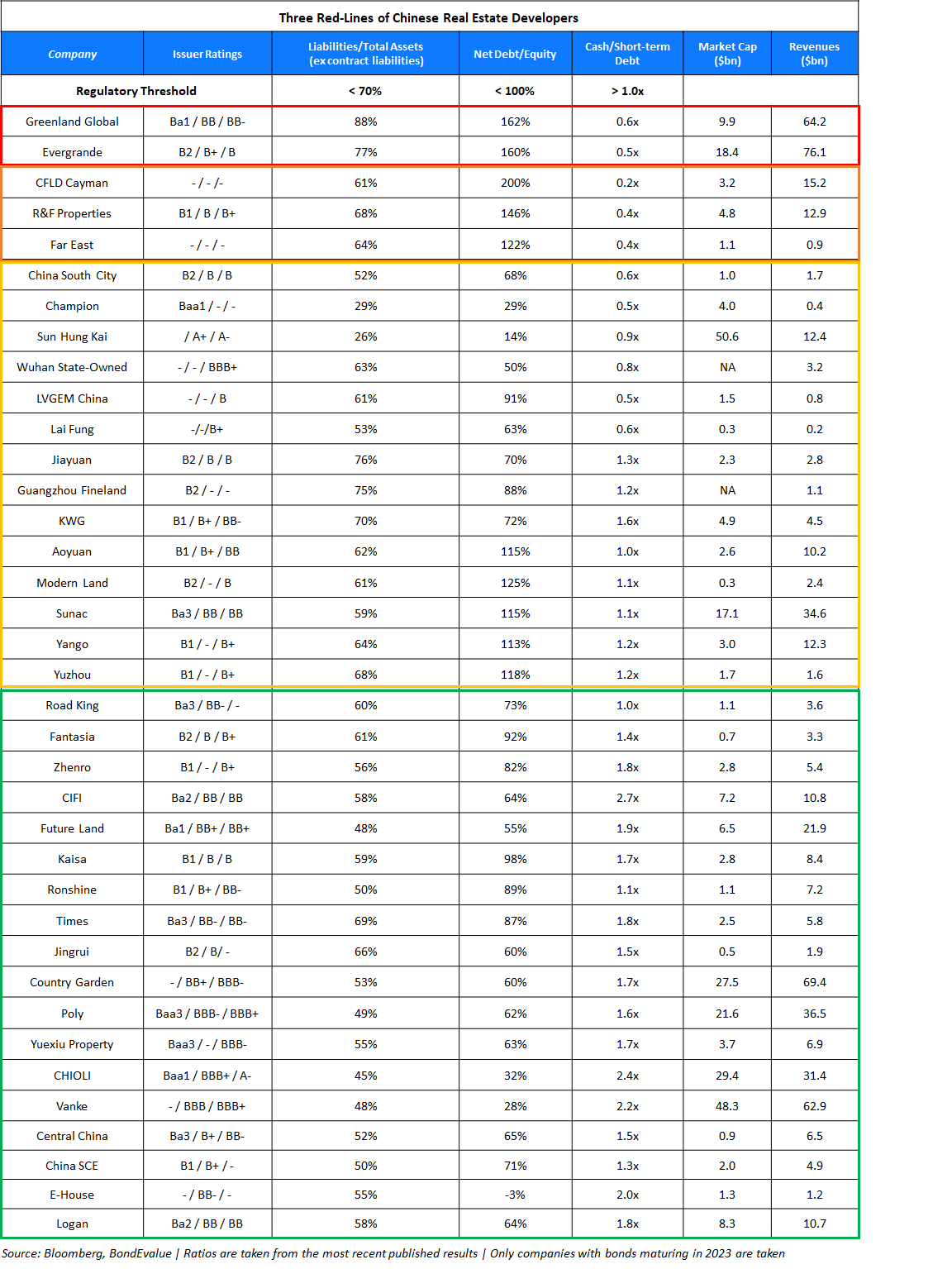 Evergrande and Greenland Global top the list, breaching all three ratios while CFLD, R&F Properties and Far East Consortium International breach two of the three ratios. To understand more about the reasons for the increased risk towards Evergrande, scroll below for a brief recap of recent events at the world's most indebted developer.

It is worth mentioning that whilst some of companies, the likes of Fantasia, Road King and Kaisa, did not breach any of the metrics as of their last published results, their Z-Spreads have widened as seen in the earlier chart. Among the three, Fantasia and Kaisa are single B names. The three red-lines can be considered as a heuristic measure and may not give the most accurate picture of the company since the sector has many complexities associated with them – structural subordination risks, cash and debt at JVs, governance risks, off balance-sheet exposure etc. “Recent news suggest that the three red lines are being taken more seriously by the authorities, issuers and investors alike. Notwithstanding the multi-dimensional complexities of China property bonds, the sector would be well served if all players saw these metrics as a go/no go benchmark”, said Schmidt. For example, Evergrande recently said that they now meet one of the three red lines metrics and expect to meet another metric over the next quarter. Whilst its debt has reduced from $110bn as at end-2020 to $88bn currently, the concern regarding commercial bills has come into the picture. Commercial bills and trade payables do not technically count towards debt as they are short-term in nature but still count as liabilities. Evergrande’s total liabilities have hardly budged from end-2020 and stands at about $301.4bn while its cash and cash equivalents are only at $24.5bn. As Dong Ma, a Beijing-based partner at BG Capital says, “The amount of Evergrande’s outstanding commercial bills is massive…It has apparently become a vital fundraising channel.”

Concerns over the financial position of China's property developers have led average yields across China High Yield to cross 10% as per NikkeiAsia vs. 5% for global high yield. Policies like the three red-lines, bank lending caps and continued scrutiny over the banking and real estate sectors have raised eyebrows on the tightening credit and investing environment. While some analysts expect a recovery in certain property developers' bonds, some are cautiously optimistic and others prefer to stay away. It remains to be seen how this segment of the market performs in the second half of the year, with likely cues from Huarong's restructuring and the extent of enforcement of the three red lines.

Below is a recap of events that on China Evergrande's saga:

For the latest news coverage on the global bond markets, sign up for the Bond Market Daily newsletter here.
More specifically, for recent news on specific property developers and the overall Chinese high yield market, click on the following links:

For the latest bond prices, yields, new bond issue alerts, analytics and more on a broad universe of bonds, sign up on the BondEvalue App here.