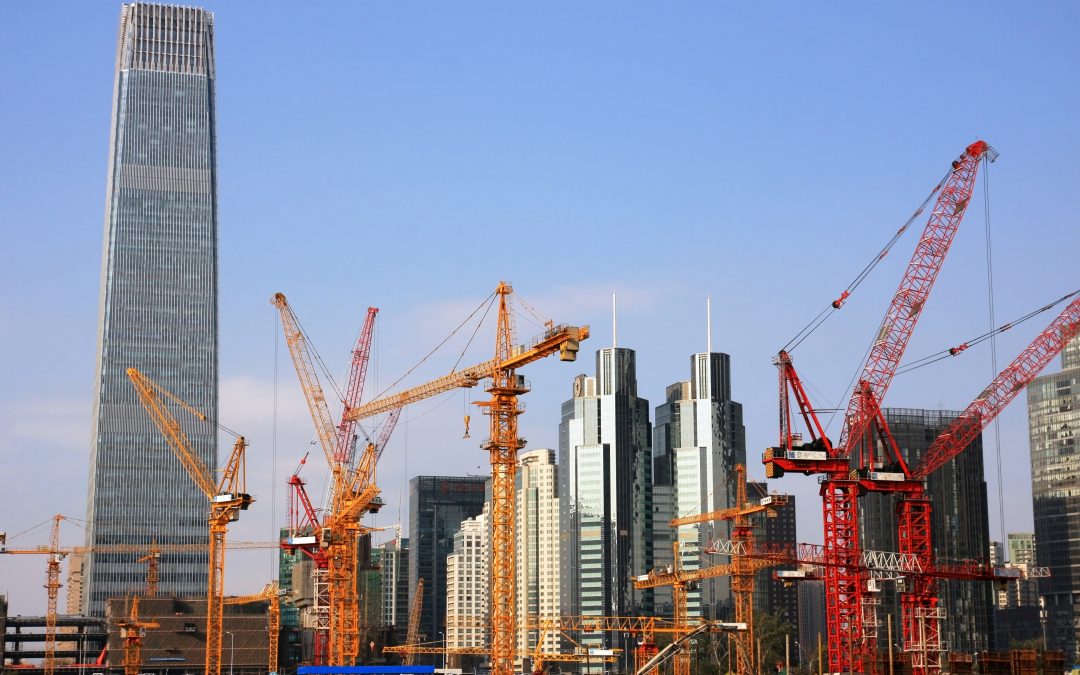 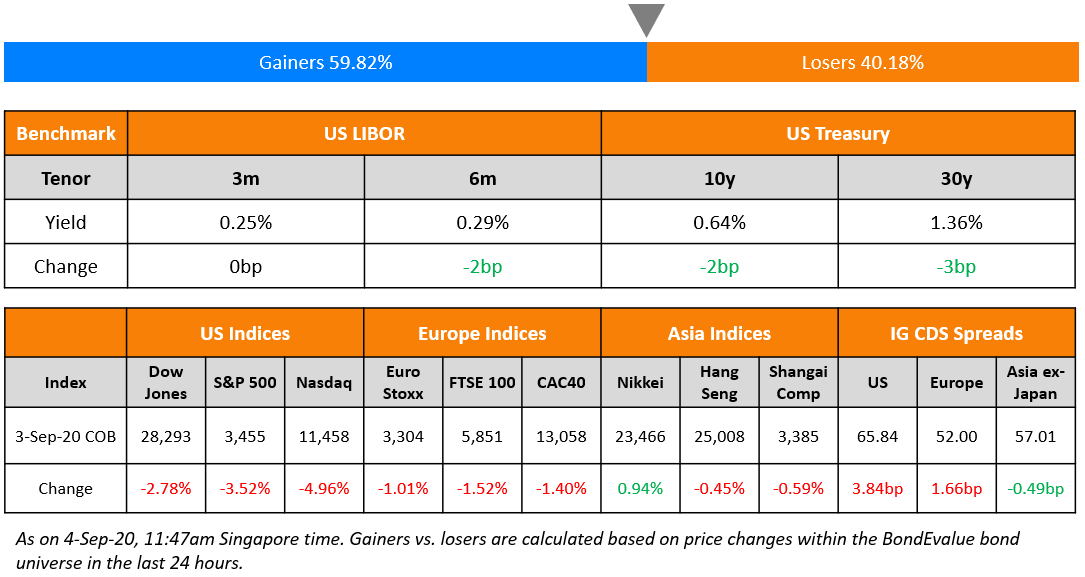 Wall Street witnessed its worst trading session since June as profit booking and reality checks kicked in. The Nasdaq Composite fell by a massive 4.96% led by an 8%, 6.2% and 9% tumble in Apple, Microsoft and Tesla shares. The DJIA and S&P 500 did relatively better, falling 2.78% and 3.51% respectively. Stalled fiscal aid talks coupled with uncertainty around the labor market ahead of today’s non-farm payroll number for August added to investor concerns. Investors moved towards safe haven Treasuries, pushing the 10Y and 30Y yields lower by 2-3bp to 0.64% and 1.36%. European indices closed lower as well, albeit lower than US indices with the FTSE 100 down 1.52% and Euronext 100 down 1.07%. Asian markets followed suit, opening 1-2% lower this morning while S&P futures are trading lower by 0.5%. US and Europe CDS spreads widened by 3.8bp and 1.7bp respectively while Asian CDS spreads were marginally higher. 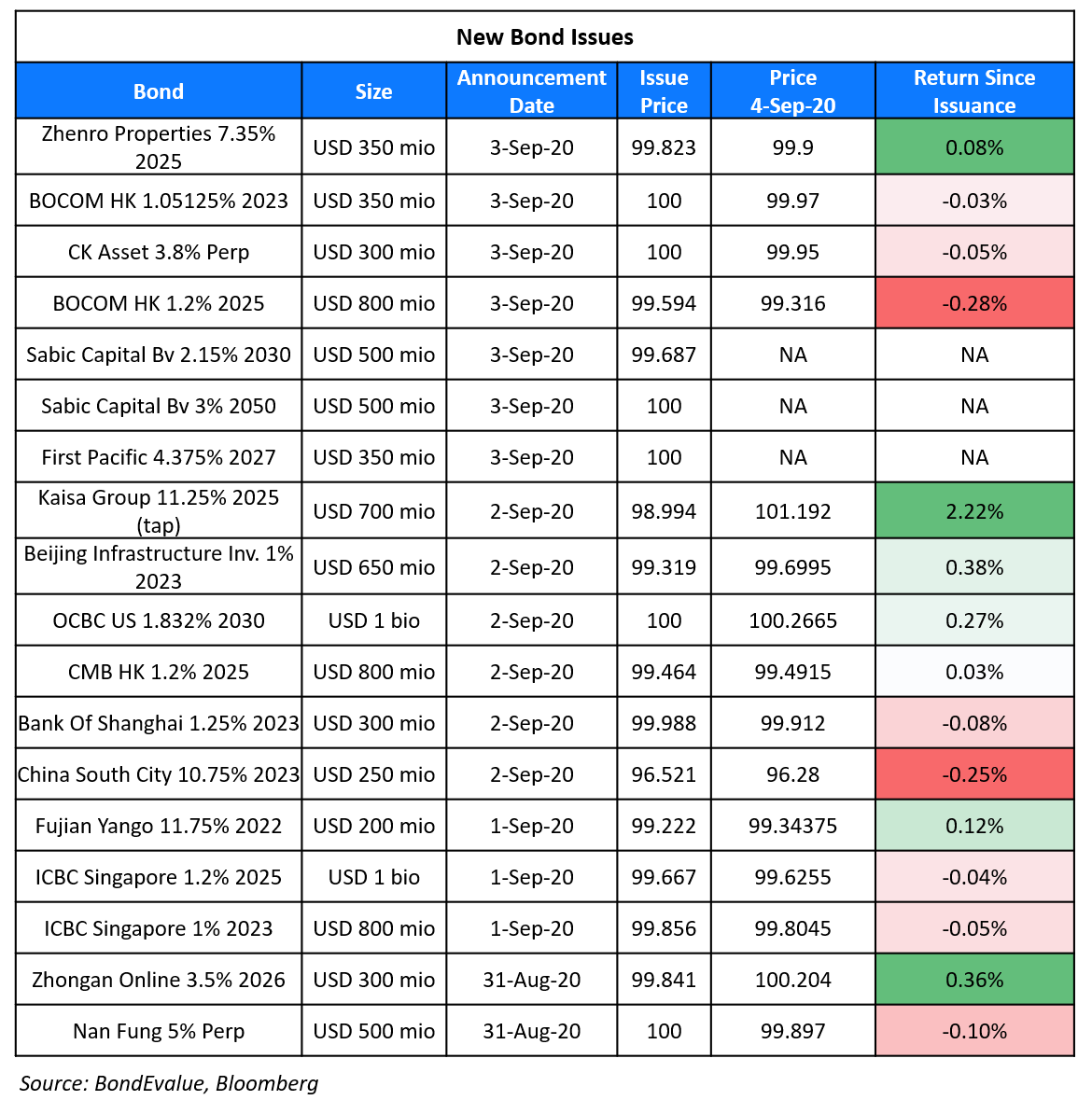 CK Asset Holdings raised $300mn via a Perpetual non-call 3Y (PerpNC3) fixed-for-life bond to yield 3.8%, 45bp inside initial guidance of 4.25% area. The bond, with expected rating of A2, received final orders exceeding $1.3bn, 4.33x issue size. Wholly owned subsidiary Panther Ventures will issue the bonds with a guarantee from CK Asset. This is the lowest coupon on record for a fixed-for-life perp, with the previous record held by Allianz with its perpNC5.5Y tier 2 bonds priced to yield 3.875% in August 2016.

Real estate developers from China are to face a serious liquidity test over the next few months as their cash buffers worsened to a four year low. As per Bloomberg, cash reserves for China’s 50 largest listed developers shrunk to their lowest levels since 2016, just enough to cover short term debt as of June 30. Making matters worse for the developers are likely tightening measures by the housing watchdog and the central bank, who last month created draft rules to monitor developers’ capital. S&P Global Ratings suggests that this proposal may lead to a tightening of overall financing for the industry. Deng Hao, chief executive of Beijing GEC Asset Management said, “It’s a bad signal for developers’ cash flow. Authorities are tightening the residential sector even with the pandemic. Developers that didn’t actively cut debt to control liquidity risks will face a stringent test.” In the chart below, we have plotted the amount outstanding of bonds due each year for Chinese developers. 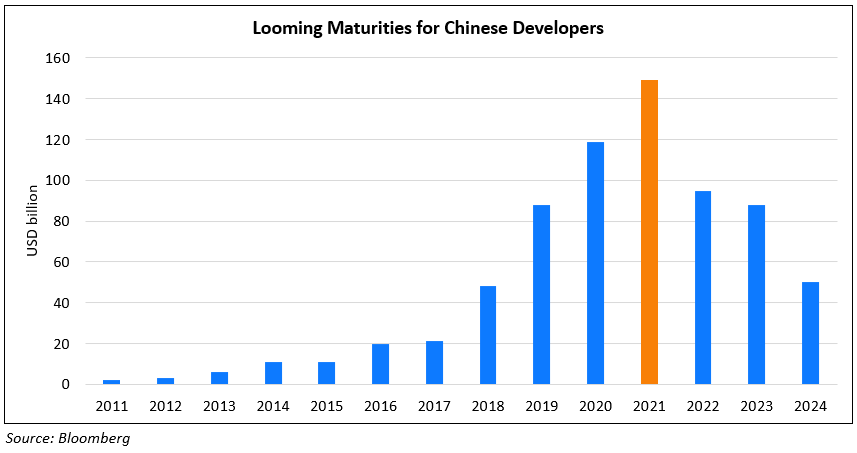 They are staring at maturities of a $149bn next year, the highest ever amount for a year for the sector. The current dismal market environment has made it harder for the developers to boost their earnings. Country Garden CFO Wu Bijun said, “As the government aims to keep home market stable, it’s not very likely for developers to expand gross margin in future. We aim to increase net profit by controlling expenses and costs.”

These concerns are not evident when looking at yields of bonds issued by China’s real estate players. The low yield environment globally has pushed investors to riskier parts of the bond market, China real estate being one of them. In the table below, we have listed dollar bonds of Chinese developers maturing in 2022/2023 – sorted by lowest-to-highest yield. 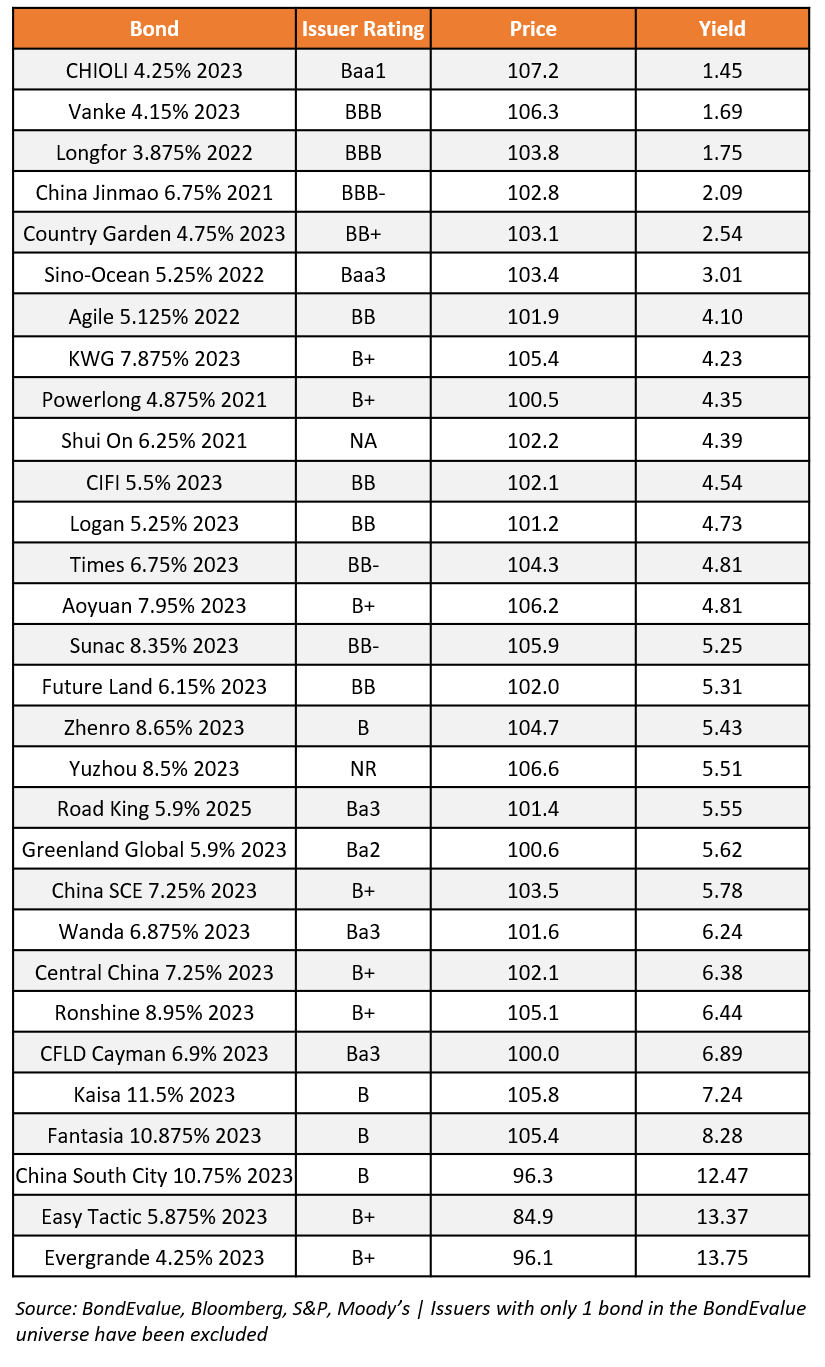 All but three bonds are trading at a premium to par offering yields tighter than its coupons. Some investment grade rated issuers such as China Overseas Land, Vanke, Longfor and China Jinmao are seeing their bonds trade at yields as low as 1.5% to 2%. The only bonds trading below par are bonds from Evergrande and R&F Properties (Easy Tactic).

Troubled department store, Macy’s posted better-than-expected Q2 results. The highlight was a 53% jump YoY in digital sales. Digital sales represent 54% of its total owned comparable sales, as most of the company’s stores were shut during the major part of the quarter. The bigger-than-expected online boost could be attributed to a higher number of online shoppers who visited the website to purchase workout clothes and home decor during the lockdown period. Online sales in the Bloomingdale luxury categories were also better than expected. However, Macy’s suffered an overall net loss of $431mn compared to a profit of $86mn last year as its net sales plunged by 35.8% to $3.56bn from $5.55bn last year. The large part of the loss has been as its store sales, which fell 61% during the period. The worst however may be over for the company as stores have started to open sales have improved. The company also ended the second quarter with a strong liquidity position having ~$1.4bn in cash on its balance sheet. 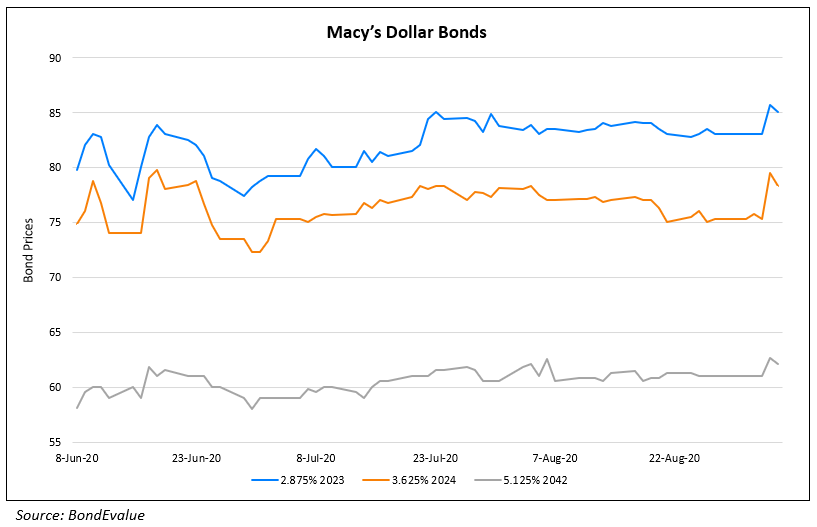 Macy’s bonds gained on the positive results and jumped on yesterday before stabilizing again today. Its 3.625% bonds due 2024 touched ~79.5 cents on the dollar, up over four points vs. a day before, before settling down at 78.3 cents on the dollar currently.

One of Brazil’s top pulp and paper companies, Suzano is looking to raise funds via sustainability-linked bonds. Sustainability bonds are an evolution in the green bond market as borrowers look to tap increasing demand for bonds with environmental, social and governance purposes. Suzano is likely to sell ~$500mn to $1bn worth of bonds, the proceeds of which would be used to repay its present debt. The issuance of these bonds will also allow the company to present an environment-friendly brand image at a time when there has been accelerating destruction of Brazil’s rainforests. Suzano targets to reduce its greenhouse gas emission to 0.19 tons of CO2, failing which the interest on the bonds will step up by 0.25%. According to Marcelo Bacci, Chief Government Officer of Suzano, “It’s an essential step to indicate we’ve got pores and skin within the sport, particularly on this second,” and added, “The fires and deforestation are attributable to criminals, and we need to be sure that everybody understands that Suzano has a totally completely different story.” Recently Germany also raised ~€6bn ($7.1bn) via green bonds indicating the rise in supply, and therefore demand for such bonds.

Meanwhile, Brazilian state development bank BNDES is looking to offload 11% stake in the paper maker. The stake worth BRL7.2bn ($1.36bn) is a part of President Bolsanaro’s larger plan to reduce the Brazilian state’s debt through divesting in its multi-billion stock portfolio.

A home equity line of credit or Heloc is a line of credit made available to borrowers against their home equity, which is the value of their home minus the amount owed under a mortgage. Helocs are essentially a second mortgage on a home as the home is used as collateral. They are similar to credit cards in that the borrower has the flexibility to draw down as much or as little, as and when needed during the draw period, which is typically 10 years. Helocs require borrowers to make interest payments, typically based on floating rates, during the draw period. After the draw period, the repayment period of 20 years begins when borrowers must make principal repayments.

Helocs went out of fashion after the global financial crisis of 2008 owing to increased securitizations of sub-prime mortgage debt. They seem to have made a comeback with the blockchain lending startup Figure Technologies issuing a $308mn bond backed by Helocs. Mike Cagney, founder of Figure Technologies and former CEO of Social Finance Inc (SoFi) said, “Helocs were a difficult product for banks, even before Covid, because of the way regulators treat capital against it. And coming into the pandemic, banks were concerned about originating the loans while borrowers are still unemployed and potentially can’t pay them back.”

On the “substantial additional support from fiscal policy” critical for US recovery – Charles Evans, Federal Reserve Bank of Chicago President

“Partisan politics threatens to endanger additional fiscal relief,” Evans said. “A lack of action or an inadequate one presents a very significant downside risk to the economy today. Even with steady progress in controlling the virus and additional fiscal support, I expect it will be some time before the economy recovers from the hit it took,” he said.

“Data have been good enough to not warrant any new policy action in September but uncertainty about the virus, growth and the inflation path remains,” said van Geffen. “The ECB will reconfirm that it remains ready to adjust policy as and when necessary.”

Kristian Toedtmann, an economist at DekaBank in Frankfurt

“Up to now, the euro’s appreciation doesn’t change the inflation outlook considerably,” said Toedtmann. “But with its rhetoric, the ECB should guard against an upward trend of the exchange rate.”

“Fiscal policy should not get used to a lax course, nor should it rely on interest rates remaining so low over the long term,” Weidmann said. “Therefore, after the crisis, it is important to reduce the increased debt ratio again.”

“We will again next year have to take on more debt beyond the usual limits,” Scholz said. “After that, we will try to get back to a normal situation.”

“When the Fed lowers its interest rates it really just kind of forces investors to take on risk,” said Souza. “Investment grade credit and asset-backed securities is where you may start to pick up that positive net yield.”

“On the real economy side, the opportunities for investing in high returns are not really there,” said Tipp. “As a result, that liquid cash goes into the market where at least you can adjust if the world changes.”

On the growing risk of debt distress and sovereign default for Laos – Jeremy Zook, director of Asia sovereign ratings with Fitch Ratings

“It will be difficult for Laos to access international bond markets in this environment, and prospects for rolling over its existing obligations in the Thai bond market appear increasingly challenging,” said Zook. “The government has sought commercial bank and bilateral financing to fill the gaps.” 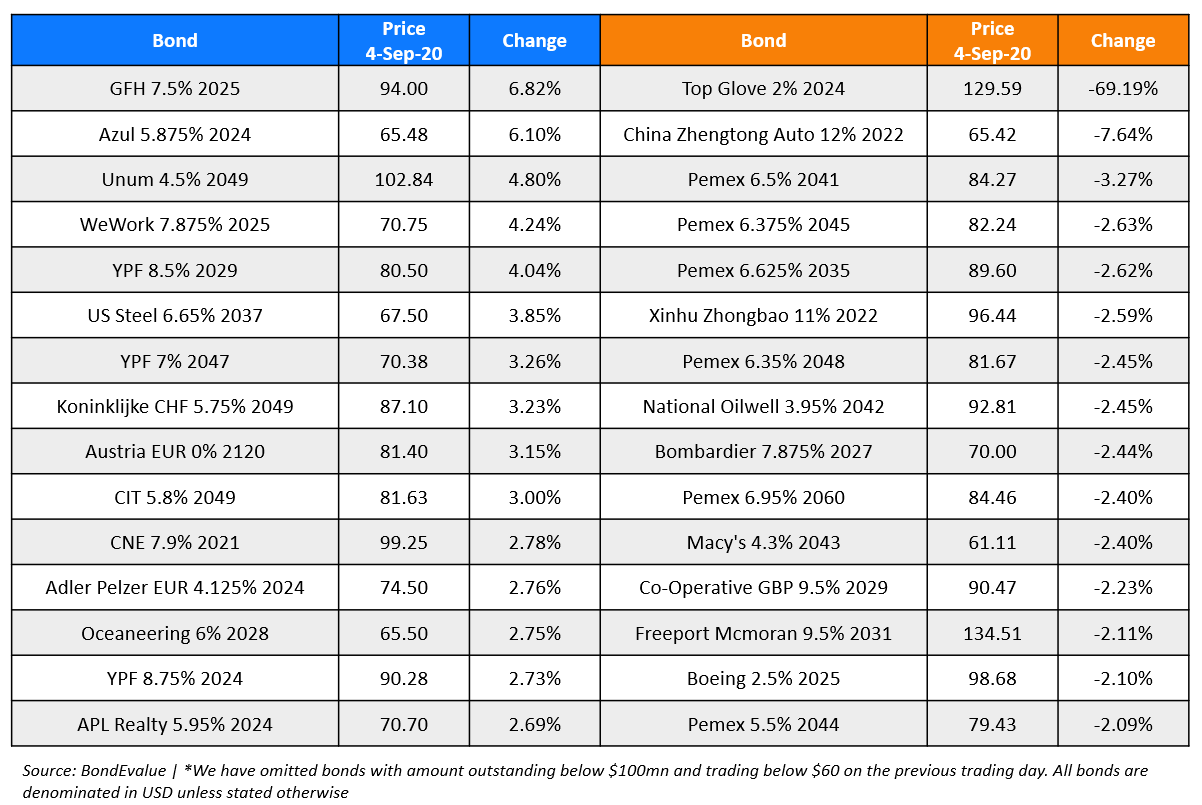