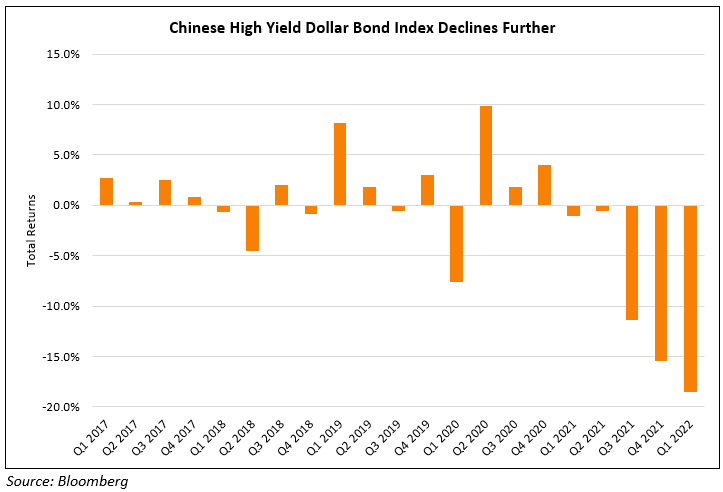 Chinese property offshore and onshore bonds have diverged, with holders of the former witnessing the most losses as developers focus debt efforts on local investors. For example, Bloomberg notes that Yuzhou Group’s and Shimao Group’s dollar bonds have plunged to highly distressed levels, however, some yuan bonds have seen smaller declines or even witnessed price gains this year. While offshore payments have been skipped/missed, onshore coupon payments have either been made or terms have been sweetened on bond extensions. Questions have also emerged on whether money owed after a restructuring would be able to leave the country. For example, some owners of a China Aoyuan unit’s onshore note said in March that they received a coupon payment, while the developer defaulted on dollar debt a month before. In another example, all of Yuzhou’s dollar bonds are trading at 10-16 cents on the dollar, whilst its active onshore notes traded above par and more than doubled in price since the time Yuzhou missed a dollar-bond coupon in March. The overall picture points to a prioritization of onshore bonds, say analysts. The subordination risk and increased risk that offshore holders face has seen them susceptible to more losses. With this the Bloomberg Chinese High Yield dollar bond index is poised to fall for a record eighth month in April. On a quarterly basis, the index last saw a price gain in Q4 2020 (see image above).